The Krups XP5620 is a simple espresso machine that doesn’t offer bags of features or one-button milky drinks, but does represent a significant step up in quality from entry-level £50 machines.

Is it worth it? We think so. As long as you don’t mind getting hands-on with the barista-style coffee making of a ‘naked’ espresso machine, the Krups XP5620 offers consistent coffee quality with very, very little mess involved.

Seen on sale for as little as £80, the Krups XP5620 is a great-value little espresso wonder. 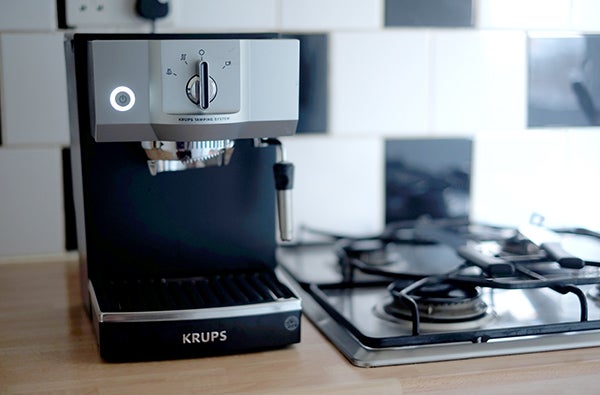 The Krups XP5620 is the close cousin of the Krups XP5210 we reviewed last year. Size-wise, they’re pretty similar – petite while not being so compact that all you can fit under the coffee nozzle is a thimble-size espresso cup.

This time around, though, Krups seems to have put much more effort into making its machine look more like it belongs in a stylish kitchen. The XP5210 is black and functional, while the XP5620 has a bit more pizzazz to it, with a silvery front and much less industrial-looking control knob.

Compared to the prettiest espresso makers from Gaggia and KitchenAid, it’s no dazzling beauty. But it is an improvement. 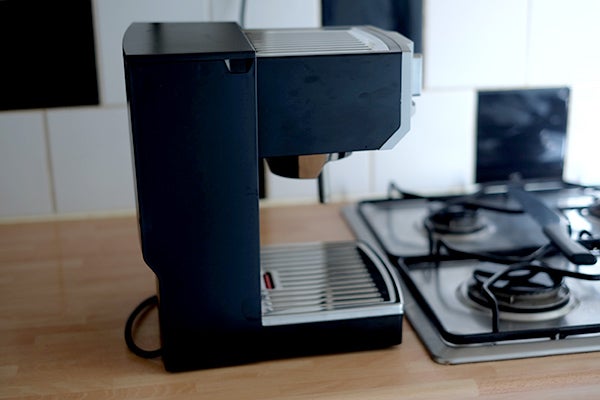 While relatively small in its front-on footprint, it’s not suited to kitchens that have cupboards hanging low above the work surface. On its top is a flap that hides the nice metal espresso spoon and the water reservoir.

The reservoir is a rectangular jug you simply yank out of the top. It has a handle for easy use. If you have overhanging cupboards, it’s a pain. If you don’t, it’s just about the most convenient system you could possibly imagine: it doesn’t get in the way of the coffee holder/steam arm, and doesn’t make you move the XP5620 to refill. 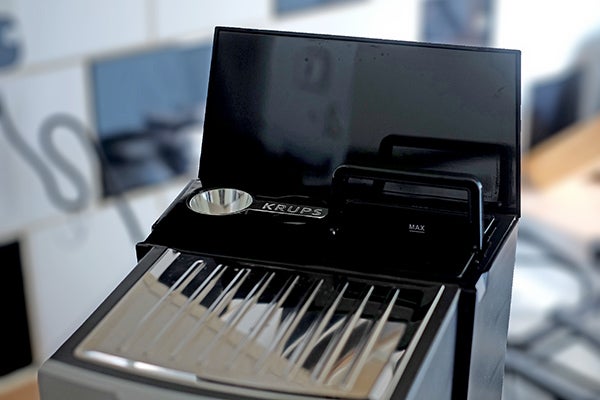 Have overhanging cupboards? You can always refill the reservoir with a glass or jug. It’s not sealed, though, so you won’t want to leaving the water sitting there for longer than a day or two.

With a milk frother/steam arm, the Krups XP5620 can prepare just about any coffee-based drink from a shot of espresso to a flat white, but a tiny bit of technique is required. If you want to remain as hands-off as possible at this price, you may be better off with a ‘pod’ machine. On the fence? This machine could save you loads of cash in the long run – pods aren’t cheap. 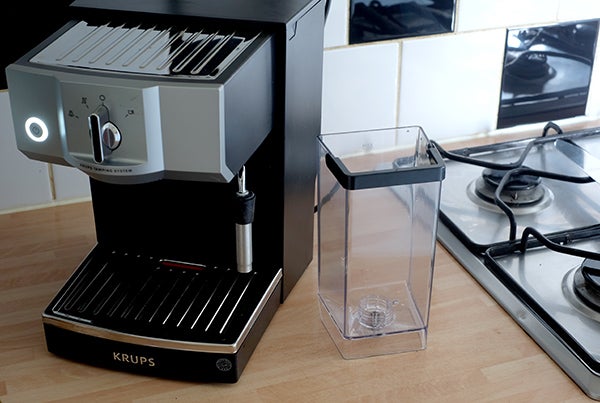 The one thing we would change if pressed is that the Krups XP5620’s steam spout doesn’t output hot water, apart from a few brief spurts when it’s first prepping to blast out steam. For Americanos you’ll either need to fire up the kettle or leave the hot water pouring through the used grounds – not how the pro baristas do it, is it?

The coffee arm is also a little too low to accommodate some mugs without tilting, and its position cannot be customised. It isn’t too hard to fit in those ‘generic’ mugs we all have in our cupboards, but bear this in mind if you drink long coffees 99% of the time.

However, if you’re out for the barista feel with virtually none of the faff, the Krups XP5620 is a very good bet. A lot of this is down to the machine’s auto tamping mechanism.

Tamping is where you compress the grounds as part of the prep. Using a manual tamper it can be a bit messy, but here you just pour or spoon the grounds in the coffee holder, put it in the XP5620 and turn until you feel the auto-tamper pressing up against the grounds.

It cuts out what can be the fiddliest part of making an espresso. 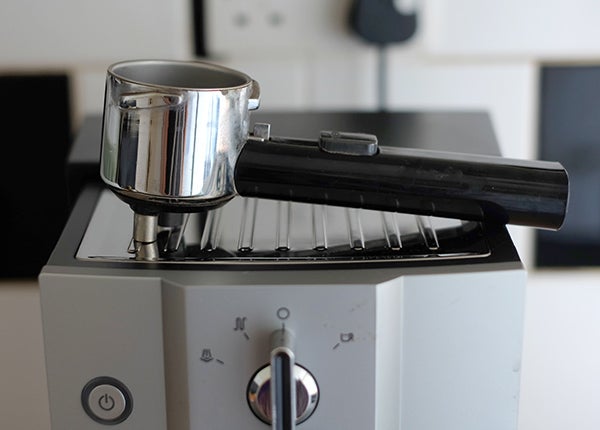 There’s a side benefit, too. Krups’ clever coffee holder system means that when you remove the holder after making a coffee, the used grounds are compressed into a puck that you can just fling out into the bin or compost. There’s zero coffee sludge.

The filter also retains no water at all, further reducing any potential mess. There’s even a button on the back of the coffee holder to reject the puck without getting your fingers involved.

Among manual espresso machines, the Krups XP5620 is a paragon of cleanliness.

It’s also very simple. Like the Krups XP5210, it uses a single front control knob – nothing else bar the power button. Turning to the right starts pumping out coffee, turning to the left once lets you heat up the stainless steel cup warmer area up top, and turning left twice starts the steam spout. 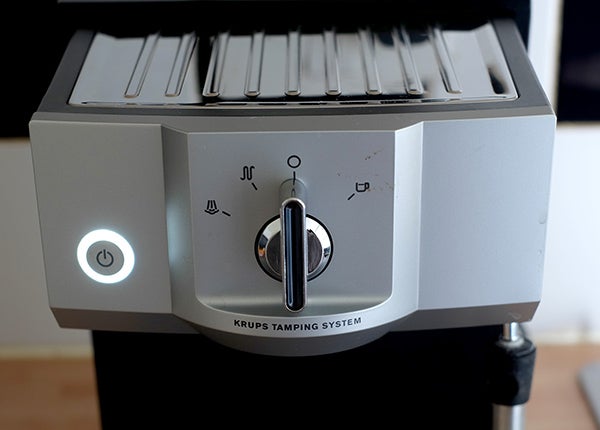 The Krups XP5620 has a very clear way of telling you when it’s heating up water. The power button is lit up. It blinks when it’s in prep, and displays a solid light when ready. It doesn’t take too long either: around 30 seconds.

We’re very happy with the power of the Krups XP5620’s insides too. The steam spout is very powerful indeed, frothing up milk extremely quickly, although it’d be nice if it didn’t spit out little jets of warm water as it’s revving up to blast steam out.

As usual the Krups XP5620 does produce some noise when outputting coffee or steam, but it is one of the quieter machines we’ve reviewed of late. Despite being largely made of plastic, the sturdy construction ensures there’s no extra rattle to the machine. 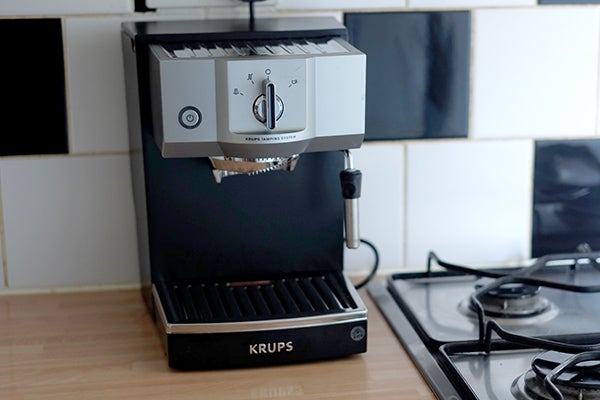 The Krups XP5620 likes making use of its power. The coffee it makes is unusually hot given time to pre-brew, meaning you can actually load-up a half-full cup with cold milk without ending up with a lukewarm mug. That’s a great bonus for those who like their coffee Americano-style.

Its temperature is admirably consistent too. There may be no temperature gauge on the outside but the Krups XP5620’s insides seem to be geared to produce pretty hot coffee. We didn’t end up with a single tepid cup.

This does mean that if you’re asking for anything more than a double shot, the output tends to slow from a steady stream to something rather drippier. The issue here is that it can ruin the crema a bit, making a hole in it and leaving it rather thin. Coffee perfectionists will not be pleased.

However, we’re happy with the colour of the crema if you stick with a double-shot measure: fairly rich and dark. 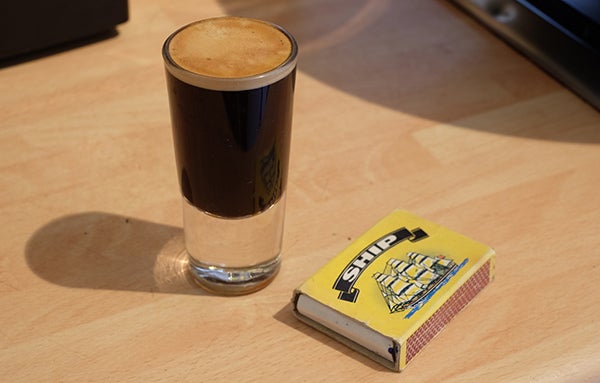 The powerful steam output makes producing milky drinks easy, too. The only issue we had was that the output is so powerful relative to some others at the price that you can end up a mug full of froth if you’re not careful where you wave your wand. We’ll take more power over less any day, though.

The flavour of the coffee is rich and consistent, although compared to some other coffee machines you may have to leave a short coffee too cool for a bit to appreciate it. 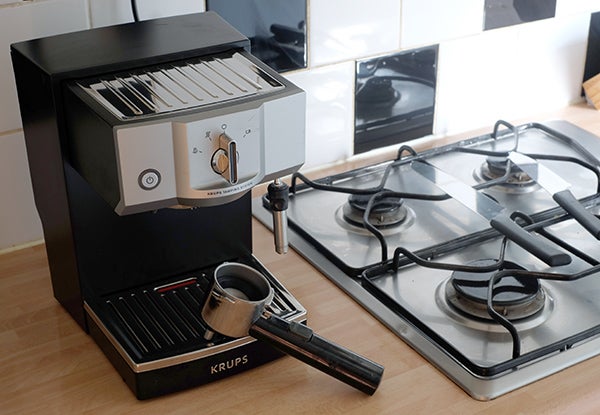 The Krups XP5620 takes the same no-nonsense approach as the earlier XP5210 while offering a bit more style. As long as you’re up for the hands-on style of a manual espresso machine, it’s easy to use and provides solid, consistent results.

There are issues, but these are more about making sure the machine suits your kitchen’s design. The reservoir design is fantastic for some, but just doesn’t fit well with all kitchens.

Those who only drink giant vats of coffee rather than espressos and milk-based drinks may also want to reconsider. The Krups XP5620 can make these, but the standard-height coffee holder and lack of pure hot water output mean it’s not totally suited to those kinds of drink.

The Krups XP5620 is a solid, reliable machine that offers great value for money and a pro feel with minimal fuss.