Despite its tiny frame, the Kenwood Mary Berry Special Edition Hand Mixer HM535CR manages to whisk egg whites and knead doughs quickly. In addition to being affordable, it has a clever way of storing all the tools in one place and features a decent range of speeds. While it’s not as powerful as some other hand mixers, it’s also less likely to fling your ingredients all over the place – as long as you stay mindful of the somewhat lax speed control switch.

The HM535CR is a special edition model of Kenwood’s HM535, designed in partnership with the Queen of Cakes herself, Mary Berry.

It felt a little shakier than other mixers I’ve tested, but it’s efficient, excelling at both whisking egg whites and kneading doughs, without causing spillages. There were some mishaps with speed control, however. 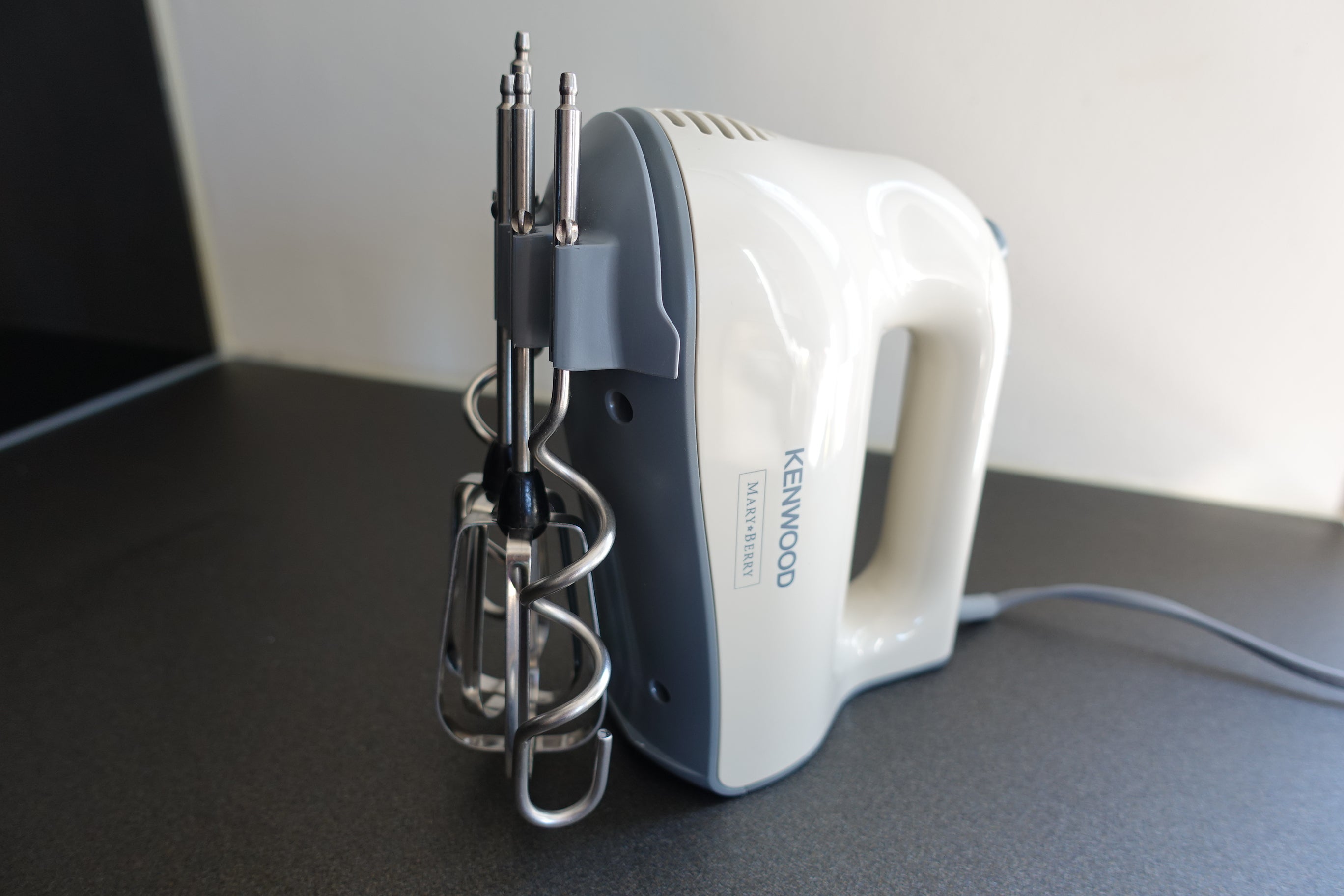 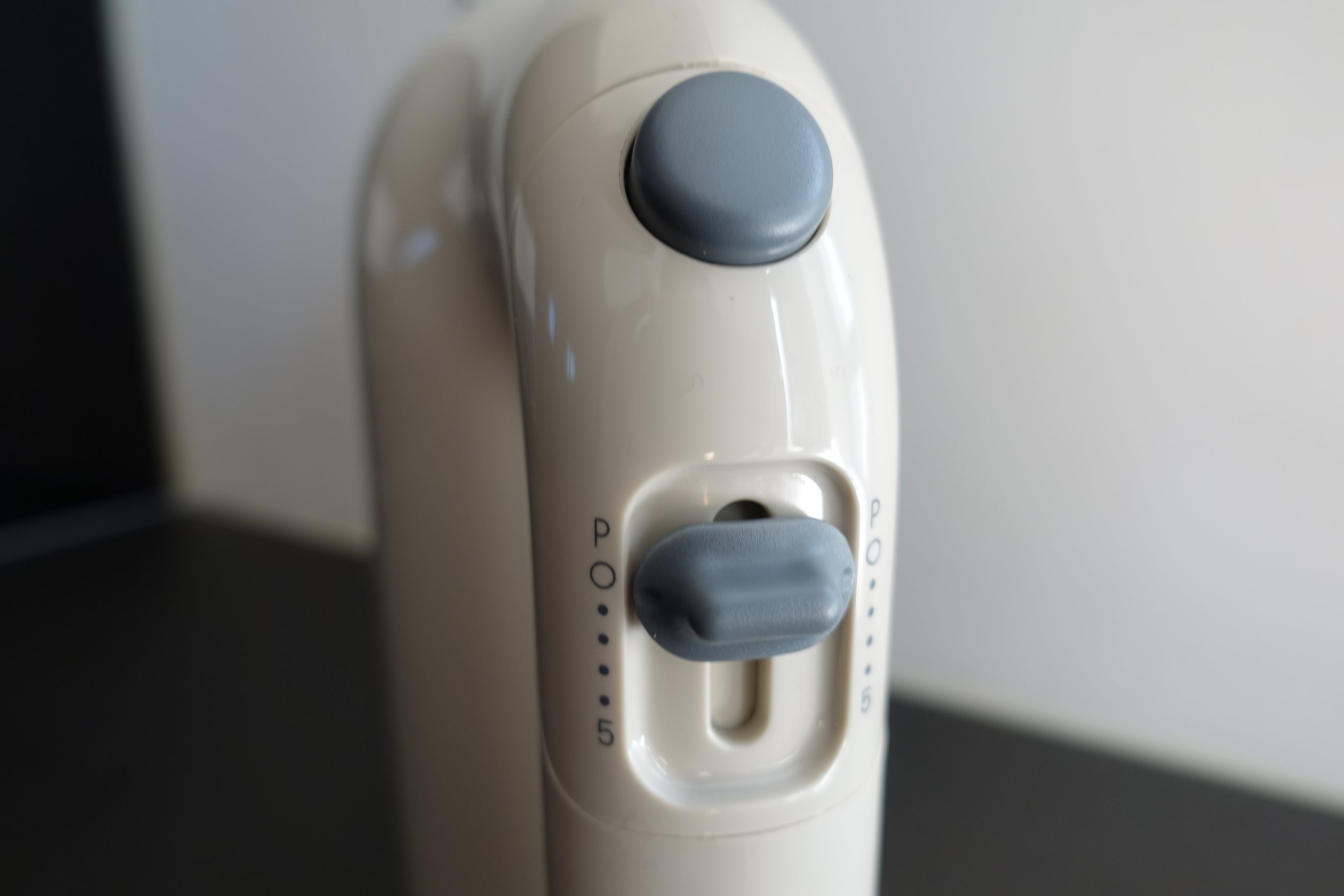 The HM535CR is a good few centimetres shorter than other mixers I’ve tested. At 0.91kg (with the beater tools attached), it weighs the same as the Russell Hobbs 24672 Desire hand mixer – the lightest I’ve tested.

The compactness doesn’t stop there. The HM535CR also comes with tool storage, which takes the form of a piece of grey plastic with slots for all the tools. This attaches nicely onto the main body of the mixer by the tool holes.

You can then wrap the generous 1.6m cable around the back of the mixer, keeping it in place using the cord grip – a handy plastic clip attached to the cable. 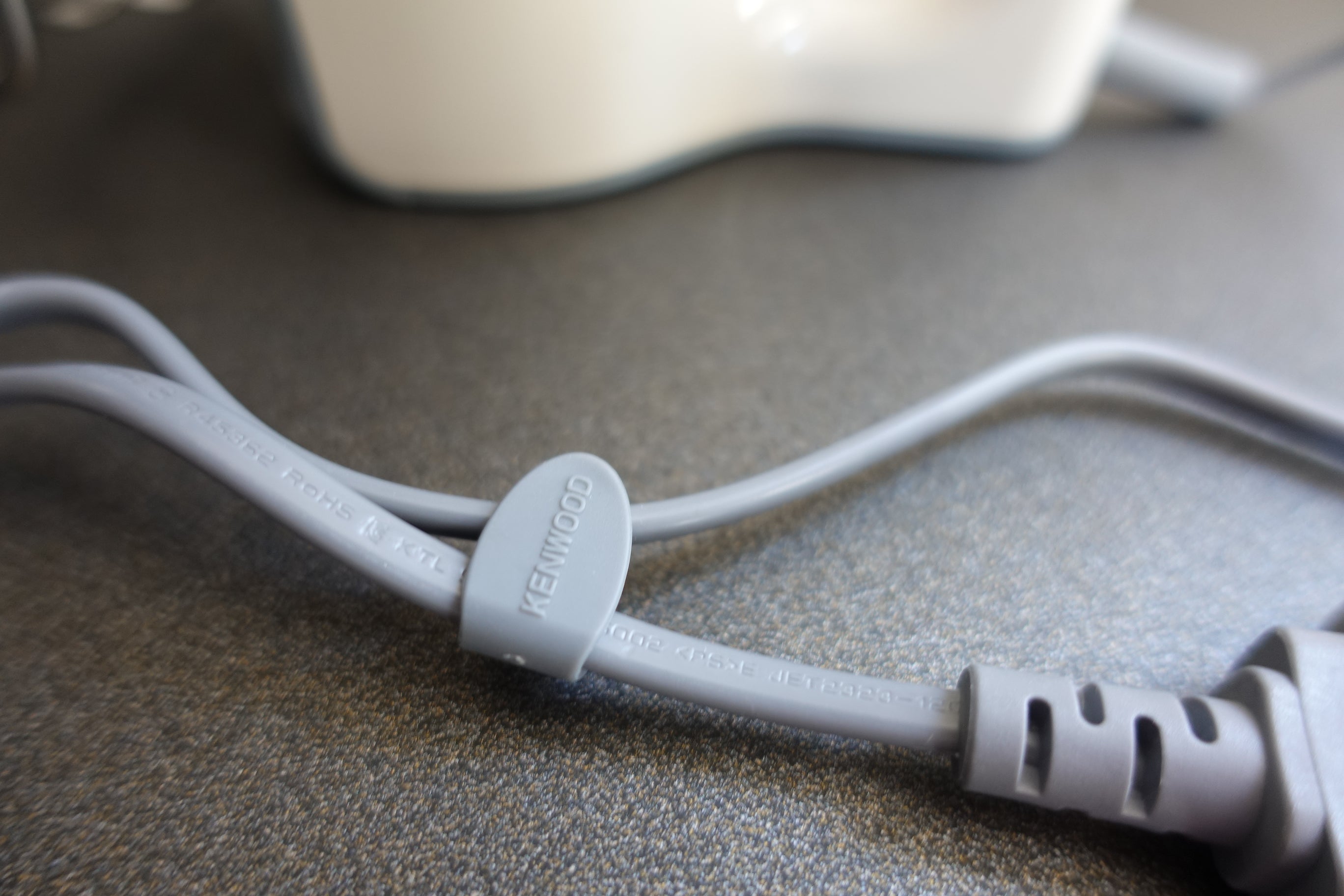 The Kenwood Mary Berry Special Edition Hand Mixer HM535CR – It doesn’t look flashy, but it will suit most kitchens

Overall, the HM535CR looks quite subdued; you can trust Mary Berry to put more emphasis on the results rather than the looks.

Having said that, it’s disappointing to find that there are only two recipes included in the manual – neither of which are attributed to Berry herself. In this special-edition range, it’s only the Chef Elite stand mixer that comes with a recipe book by Berry (it’s “subject to availability”).

Decked in glossy cream plastic, the mixer has a slight retro vibe, compared with the previous HM535’s metallic silver. Its bottom and back are made of matte grey plastic, which can also be seen on the eject button, the speed control switch and the cable.

The mixer comes with two pairs of stainless steel tools: beaters and dough hooks. While it would have been nice to also have a whisk, the beaters manage all whisking tasks with plenty of oomph. 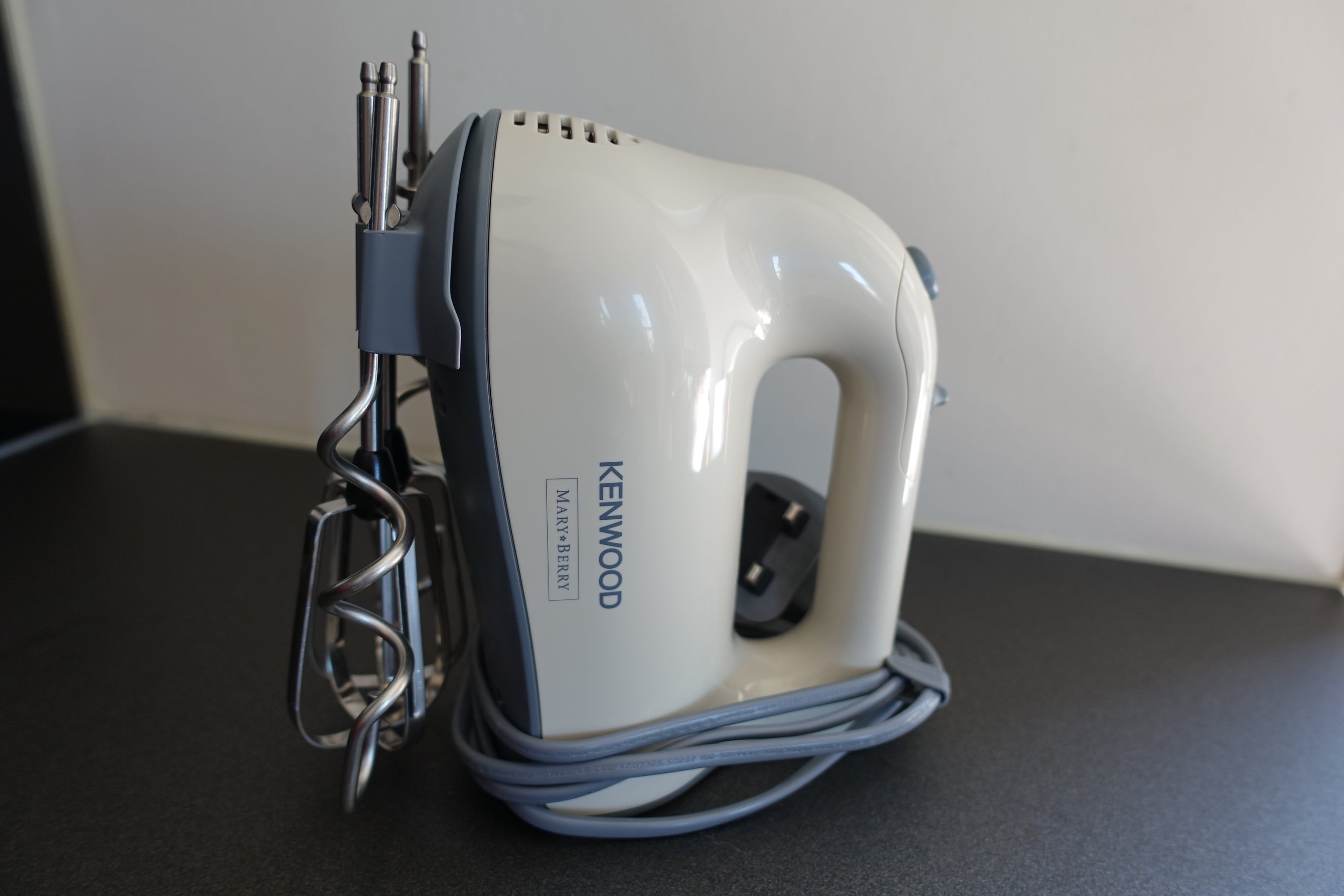 The Kenwood Mary Berry Special Edition Hand Mixer HM535CR – A decent range of speeds, but its speed control switch can be tricky to handle

The HM535CR has a pulse function that can be activated by sliding the switch upwards. Below the P and the O (signifying Pulse and Off), you’ll find four dots for speeds 1 to 4 and a “5”.

The markings themselves are clear enough, although the gaps between them are so small that it’s sometimes difficult to tell which speed you’re at. The problems really lie when it comes to picking a speed.

The resistance mechanism inside the switch isn’t very defined. As a result, the switch slides down all too easily, meaning you’re likely to overshoot the mark and land on setting 4 instead of 2. This can lead to spillages, particularly since there’s no soft-start function.

However, you’re less likely to make that mistake if you’re careful and/or using both hands to move the switch. 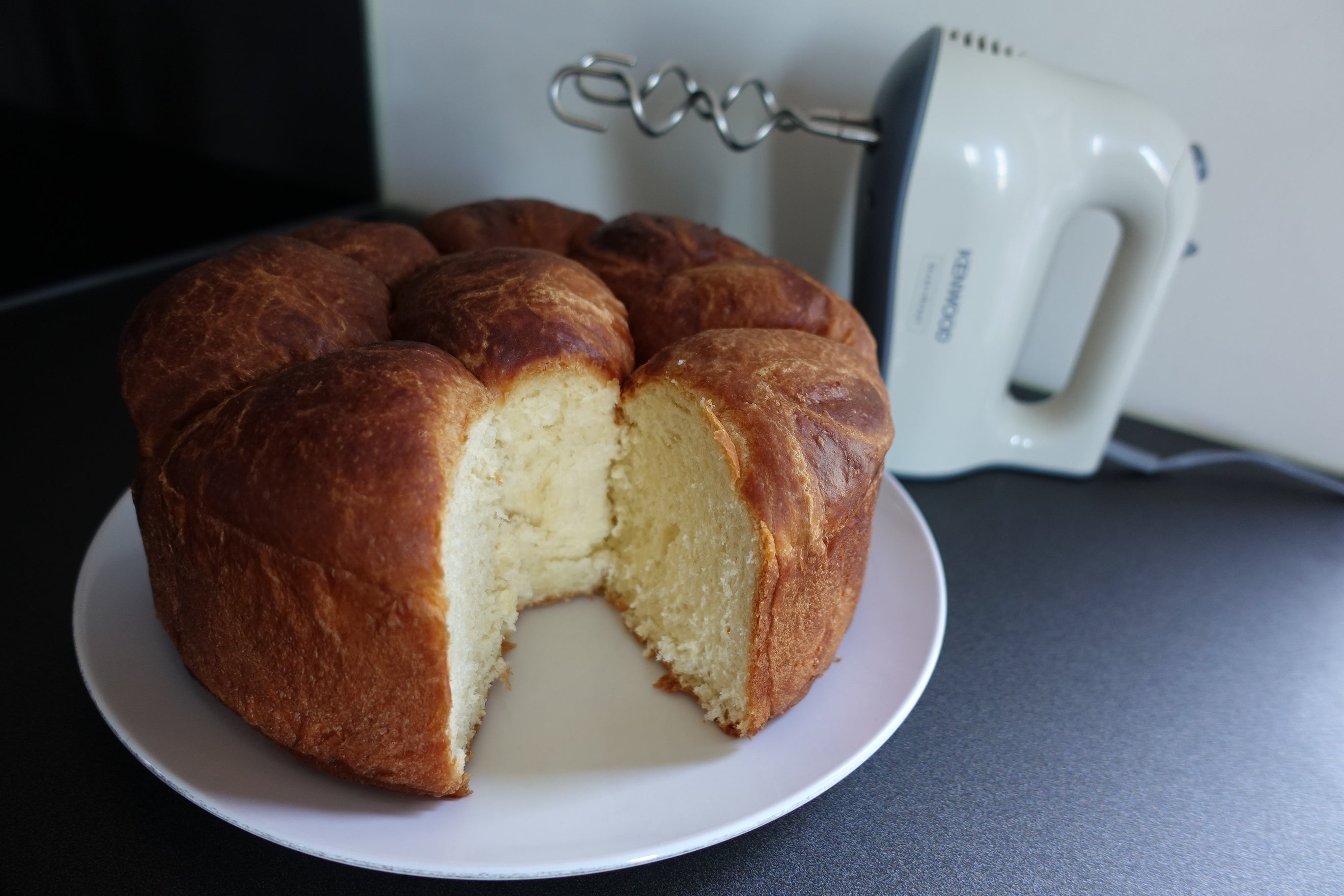 If you’re looking for a compact hand mixer for occasional use, the tiny frame of the HM535CR packs quite a punch. For an affordable mixer, it also offers a decent range of speeds.

For those not too fussed about tool storage, the Russell Hobbs 24672 Desire Matte Black Hand Mixer is even cheaper, less fiddly and steadier to use. And if you’re a heavy-duty baker, it may be more suitable to choose a pricier option with a greater range of speeds, such as the KitchenAid 9-Speed Hand Mixer.