JVC certainly knows how to make decent budget camcorders. However, the Everio GZ-HM30 makes some compromises to achieve its sub-£200 price. The Everio GZ-HM445, on the other hand, takes a more mainstream approach, although it’s very similar in many respects as well. We had the red REK version to play with, but the HM445 is also available in black, blue and silver, suffixed BEK, AEK and SEK respectively.

Where the HM30 opts for AVCHD Lite, so its maximum resolution is 720p, the HM445 records regular, full-fat AVCHD with a 1080p top resolution. However, the sensor is a similarly specified 1/5.8in CMOS with just 1.5Mpixels, which isn’t enough for Full HD, as this requires at least 2.07Mpixels. So the higher shooting resolution isn’t as impressive as it might first appear, since some of the pixels will be interpolated. Unlike the HM30, the HM445 can capture still images at up to 1,920 x 1,080 pixels, although this again uses interpolation, and standard definition video modes are also available.

The small CMOS sensor means the HM445 can offer a fairly sizeable 40x optical zoom. In standard definition mode, the extra pixels are harnessed to provide an even greater 70x zoom. This doesn’t magnify the signal from the sensor, but instead crops into it, preserving much more detail. The zoom factors are both identical to the HM30’s. Another function utilising CMOS pixels is the Advanced Image Stabiliser (AIS), which is more powerful than the standard option. However, it crops into the frame slightly to achieve its results, slightly reducing detail, and the vibration frequency it is tuned to, makes the AIS most effective for smoothing shooting when walking, rather than handheld operation at maximum zoom.

Video is recorded to SD cards, and here the HM445 diverges from the HM30 slightly again, offering two slots rather than one. Both support SDXC, so provide a maximum capacity of 128GB when populated with the largest available media. At the top UXP quality setting, a 64GB card will be enough for five hours 50 minutes of footage, so there’s potential for lots of video storage with both slots populated, although you will have to pay considerably to achieve this capacity. 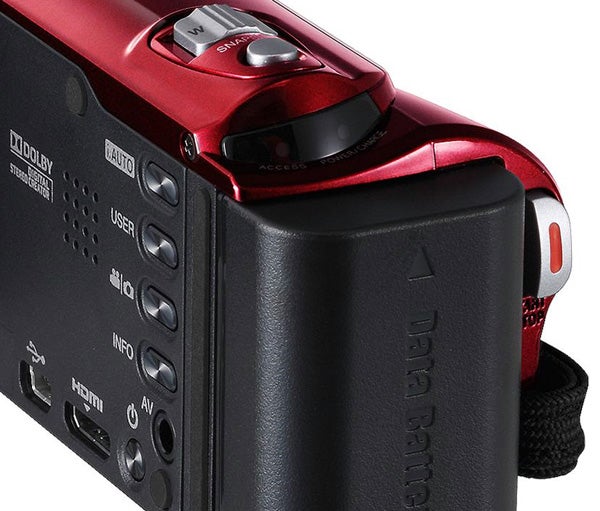 Most significantly, where the HM30 keeps the costs down by relying on a few fiddly buttons on the side of the camcorder to operate its menu, the HM445 sports a touch-screen LCD. This comes with a host of more advanced features. The extra rapid-access S menu is available, with its special functions. This provides a small library of animated overlay effects, and the face sub window system, which is supposed to detect a face and superimpose it within the frame as a picture-in-picture, although it didn’t work exactly as advertised.

There’s also a more extensive menu, which varies in options depending on whether the camcorder is in iA Intelligent Auto or Manual modes. Set to iA, the touch-screen can be harnessed for various finger-operated focus and exposure options. You can specify a face to track, or select a region of colour. Alternatively, it’s possible to choose a fixed point in the frame to use as a reference, irrespective of how the contents of the frame changes. The HM30, with its non-touch-screen display, offers none of these options.

With the HM445, virtually all functions are performed with the LCD, except switching to manual, calling up onscreen information, and toggling between camera and camcorder modes, although there is one button for a single user-configurable function. This can be set to enable the Nightalive mode; turn on touch AF/AE; call up manual focusing, backlight compensation, or white balance; or cycle through digital image stabilisation settings. However, you can’t assign the tele-macro or video light functions to this button.

Switching to Manual, there are some scene modes available, but only two of them – the Nightalive low light option and Spotlight setting. You can focus manually, although as this uses virtual touch-screen buttons it’s a little fiddly to operate. There’s a brightness control with 13 steps from -6 to 6, but no separate settings for shutter, aperture and video gain. White balance options include the usual automatic and manual modes, plus presets for sunny, cloudy and halogen-lit indoor conditions. But there are also two underwater options, depending on whether the water lends a bluish or greenish hue. 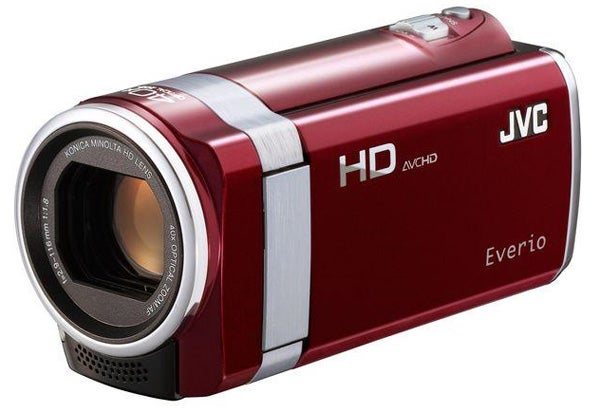 So, apart from the touch AF/AE and S menu options, the HM445 doesn’t have noticeably more manual features than the HM30. But they are considerably easier to get to, thanks to the touch-screen, and the extra user button means you can put a frequently used function like back-light compensation within easy reach. There are no enthusiast features like minijacks for an external microphone or headphones, or an accessory shoe for attaching peripherals, but unlike the HM30, the HM445 has a built-in video light.

Although the HM445 records higher-resolution video than the HM30, because it has the same sensor the overall image quality isn’t significantly better. In good lighting, the colour fidelity is similarly decent, and there is a little more detail, although not as much as a premium HD camcorder. Low light performance is also close to the HM30’s with colour maintained at a low level of illumination, and only a small sign of grain, although again there’s slightly more detail. Overall, whilst the HM30 already produces good image quality for a sub-£200 camcorder, the HM445 is slightly better.

The JVC Everio GZ-HM30 is decent value, but it cuts a few too many corners to be a budget classic like the Everio GZ-MG330. The Everio GZ-HM445 has much in common with the HM30, including the small CMOS sensor, but the regular AVCHD format will be more acceptable to some, and the touch-screen interface makes this model a whole lot easier to operate if you want to step beyond mere pointing and shooting. With a price that’s still just below £200, it’s not much more expensive, either, and image quality is slightly better. This makes JVC’s Everio GZ-HM445 one of the best value budget camcorders around.