What is the JBL SoundBoost?

The SoundBoost is what the Moto Mod concept was made for. It takes a perennial weakness of today’s smartphones – crappy speakers –  and eliminates it with a snap and a click.

It’s an expensive addition to your Moto Z phone, but of all the mods Motorola has made available so far, it’s by far the most useful. 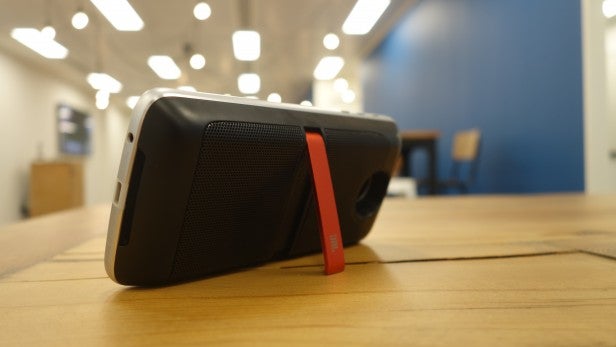 The SoundBoost is a chunky piece of kit, weighing in at 145g and adding 13mm of depth to the phone you’re snapping it onto. It’s not stunningly beautiful; the black plastic looks a little cheap and little has been done to jazz up the speaker grilles. The orange kickstand that sits dead-centre is the one piece of design flare, but this is not an addition designed for style.

It snaps onto the back of any compatible Motorola phone via magnetic connectors. You can only have one Moto Mod connected at a time, which means you’ll have to remove the obligatory backplate you normally have attached to your phone. This is a real faff, and it feels a bit untidy just to leave your phone’s back cover lying around.

The speaker has a circular hole so your phone’s camera and flash aren’t obstructed, so you can be both DJ and official photographer at your next house party.

In truth, using the phone with the speaker attached is pretty silly. It’s heavy and thick and wrapping your hands around the speaker muffles the sound. When attached to your phone, the JBL SoundBoost is best left alone to do its thing unless you’re carrying it from room to room or waving it in the air like you just don’t care.

The kickstand serves a dual purpose: both keeping the speakers from firing directly into whatever surface your phone is sitting on, and also to allow you to easily switch tracks without having to pick your phone up. It’s also great for watching YouTube video at the dinner table. I do wish it had the option to tilt a little further back for a bit more flexibility, but it’s a minor quibble.

The SoundBoost contains a pair of 3W drivers, which pump out a genuinely impressive sound. At half-volume and above, music has noticeably more depth and bass than the Moto Z’s built-in speaker. Turn things up to 11 and you’ll get a loud, undistorted sound that you’ll be able to hear in the next room.

Rock and pop are served well, and that all-important bass is present, if not as ground-shaking as some might like. For the size, there’s very little to complain about here.

You might think the speakers firing away from you would decrease sound quality, but the speaker actually works better with a surface underneath it to disperse the sound. 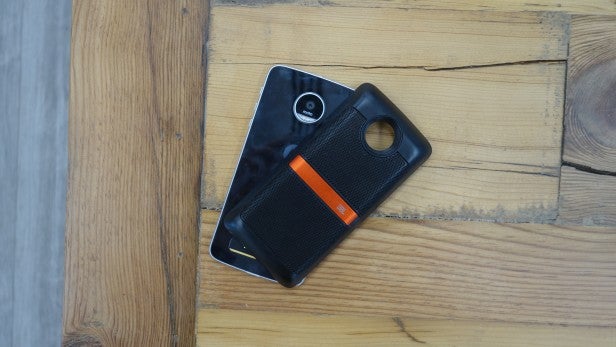 Nothing I played through the SoundBoost ever sounded over-wrought or unpleasant, which is significantly better than you’d get from typical mini speakers.

If you’re looking to keep the noise down, there’s little reason to attach the SoundBoost, as you’ll lose most of the bass it was providing at lower volumes. Still, it’s useful as a stand in this case.

Motorola claims the JBL SoundBoost will last up to 10 hours on a single charge of its 1,000mAh battery. This is probably true if you’re playing music at below half volume, but in my testing that was mostly conducted at around ⅔ of maximum volume, I saw the cell drain at around 12% per hour, which will net you a little over eight hours.

You can keep an eye on its battery level just by pulling down on your notifications pane; the SoundBoost’s battery level will appear next to your phone’s own battery status. 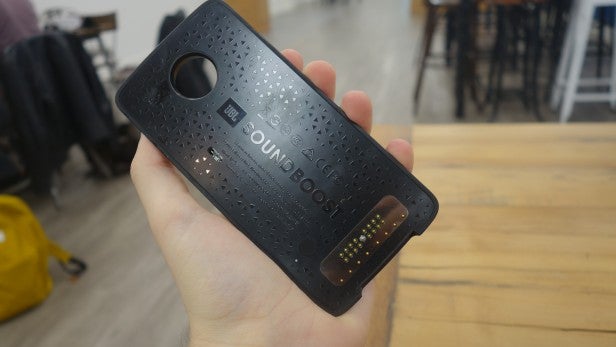 Because it has its own battery, it won’t consume any of your phone’s power. However, the two do share power when the phone is connected to the mains, which means you can charge your phone and the SoundBoost simultaneously. The music can literally last forever.

If it’s not attached to your phone, you can charge the SoundBoost separately using the USB-C connector on the back. A small indicator LED on the back lets you know when it’s charged.

It’s a little irritating that the SoundBoost can’t be used as an emergency battery pack, which would make it even more useful in a pinch.

A super useful Moto Mod, my only qualms with the JBL SoundBoost is the inherent awkwardness of the Mod platform and its pretty high price. However, it solves a genuine problem that affects all smartphones, and for that it should be commended.