If I was to pick one standout feature with the iPhone XR, it would be the battery life. It’s comfortably the longest-lasting iPhone Apple has released in 2018, and the first to equal the iPhone Plus series phones for endurance. it’s slightly behind the new iPhone 11 Pro Max, though.

After taking the phone off charge at 8am, the iPhone XR will easily see me through to midnight without requiring low-power mode and with roughly 30% remaining. That’s with multiple email accounts, photos constantly being backed up, and the usual array of browsing, messaging, gaming and calls.

Standby time is great too, so even with 30% left at night, it’ll only drop a couple of percentage points overnight.

In Trusted Reviews’ more synthetic selection of battery tests, the iPhone XR still impressed. An hour of Netflix ate through 4-5% and 8% after about 30 minutes of Asphalt 9. All these tests were carried out with the display set to automatic, and with the usual array of settings you’d expect to have turned on: Bluetooth, Wi-Fi and cellular. 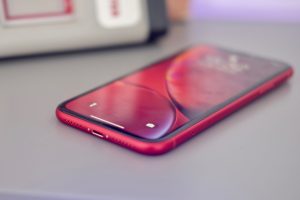 Even though it’s become commonplace for even budget Android phones to ship with a fast charger, the iPhone XR still comes with a disappointing 5W plug. That’s the same plug you’d have got with the iPhone 3G.

If you want to enable fast charging (something the phone does actually support), then you’ll have to splurge on both a higher-wattage plug and a USB-C to Lightning cable. There’s no excuse for not including this, even with the new reduced price.

The lack of fast charging means charging times can be up to three hours to go from zero to 100%. And it’s not the kind of phone that can be plugged in for a couple of minutes and receive a notable battery boost. This is one area where the iPhone XR feels behind the times. Qi wireless charging is here and, while it’s easy to plonk the phone down on a pad to get some juice, it’s again very slow.

Why buy the iPhone XR?

The iPhone XR is an excellent phone now at an even better price. It offers a lot of the features of the new iPhone 11 and even comes in some colours you might prefer.

Some might argue the screen lacks a high resolution. While they’re not wrong, the display here is still nice and colourful. The camera also isn’t as good as the dual-lens array on the iPhone 11.

For a similar price, there are plenty of competing Android phones. The OnePlus 7T lacks the camera prowess of the XR, yet it’s expected to come in cheaper and with 128GB storage. There’s also the Pixel 3A, which is cheaper than the XR and has a better camera.

But if you’re on the lookout for an iPhone and don’t want to completely break the bank, then this is the one to go for.

Still a great all-round iPhone. Though if you can afford it go for the iPhone 11 due to its better camera.