Notifications in iOS 8 pick up a nice trick in the form of interactive notifications. These let you perform quick actions straight from banner notifications just by pulling down. This is open to third-party developers, as well, so you’re bound to see more of them in the coming months.

For now the main examples come from Apple, such as the ability to reply to messages straight from notification, accept and decline calendar invitations and a smattering of other actions. You can comment and like Facebook statuses this way, too. It’s a neat addition that works well. Lockscreen notifications get a similar treatment, though the options are more limited. 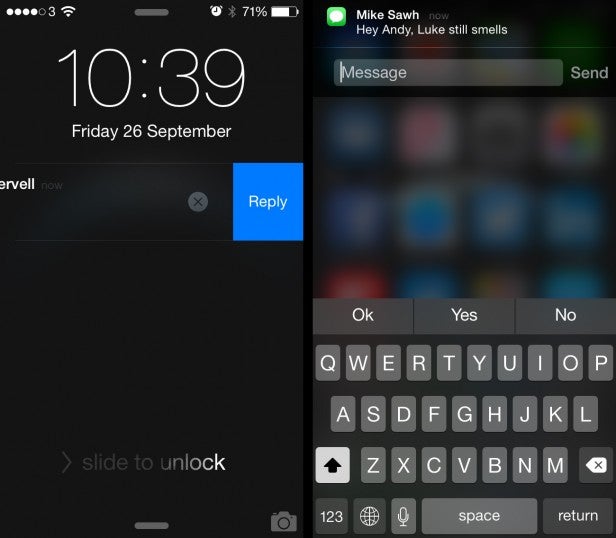 But there’s room for improvement here. Inexplicably, there’s still no ‘Clear All’ option in the Notifications Center. It dearly needs this for those times when there are too many and few are worth checking. Likewise, none of the notifications are interactive here — all you do is clear them or tap to enter the app in question. It seems odd that the Today view and banner notifications add interaction, but the core notifications section doesn’t.

We can applaud the removal of the ‘Missed’ tab, though, it didn’t add anything.

The Control Center, meanwhile, hasn’t changed much. It has the same options, but it’s slightly more opaque now and the brightness slider has a nice tweak that make it clearer how your change will effect visibility of the main screen.

Search isn’t really Apple’s business, but it’s still an important part of iOS and as in Yosemite it’s enhanced the Spotlight search to make it a little smarter. It now searches Wikipedia, iBooks, iTunes and the App Store and it also works in Safari. Many have interpreted the latter as a stab at Google as it can steer you away from its search, but really it’s a just a sensible user-centric improvement.

Changes to Siri are very light, indeed. They’re certainly not enough to convince anyone who doesn’t use it much to start. You can now identify songs using Shazam and purchase content from iTunes, neither of which we have much time for. 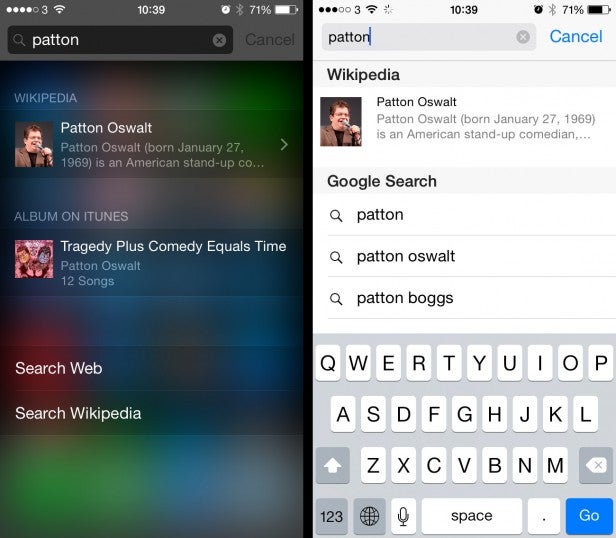 Apple has added an ‘Ok, Google’ style activation prompt in ‘Hey, Siri’, but it’s limited to when your iPhone or iPad is plugged in. This is useful when your device isn’t within reach, though it’s not clear why you can’t use it any other time. Battery life concerns are the likely candidate.

Of greater import is the fact the dictation mode now streams your message, rather than waiting for your to finish to show you the result. It’s not a revolutionary change, but it is helpful to see if mistakes are made as they appear rather than at the end. 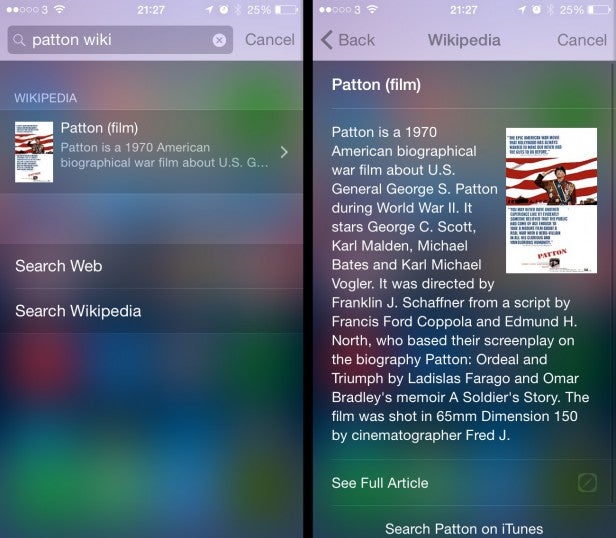 Apple’s on-screen keyboard hasn’t changed much over the years, but in iOS 8 it gains QuickType. This is the standard ‘predictive’ word bar seen on Android phones and keyboards for some time now. It’s a sensible addition, albeit one that doesn’t move things forward much. It’s faster to type with one hand now, but not as fast as Swype or SwiftKey Flow, and it’s largely redundant when typing with two hands.

More irksome is the Shift button behaviour introduced in iOS 7 that remains in iOS 8. It’s still confusing sometimes whether you’re in uppercase or lowercase, particularly as the main keys don’t change to match as on most third-party keyboards. It’s something we’ve got used to over time, but Apple could fix this very easily. 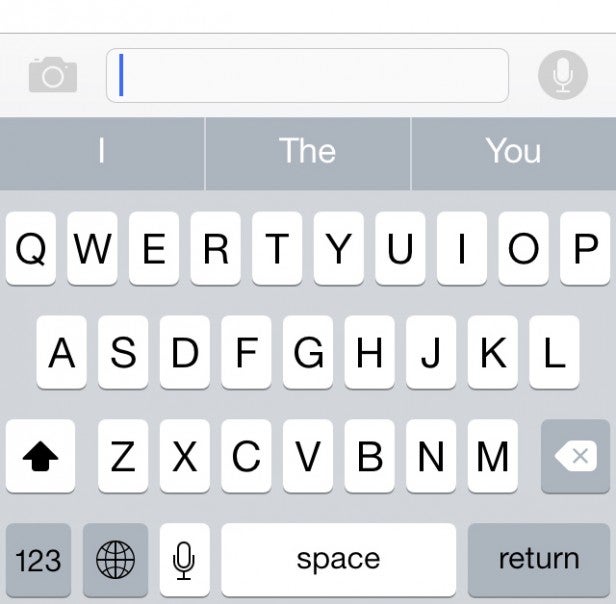 Messages, meanwhile, has several important and helpful changes. Our favourite is the ability to send voice messages. Although limited to iMessages, it’s a nice option to have and works very well. The only disappointment is you can’t send a voice message using Siri — when asked it directs you to the Messages app — which feels like a missed opportunity.

There’s a similar addition for taking and sending photos — hold down the camera button in the left corner and you can instantly take a photo or video and send it without leaving the Messages app. It defaults to the front-camera (i.e. selfie mode), but you can switch to the main one and you can record a video with either, too. It’s a neat addition that saves switching from other apps. 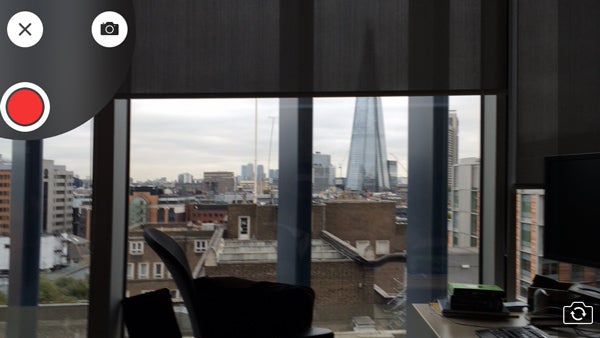 This is the interface when taking a photo from Messages. Tap the the camera button and your shot is instantly sent as a message.

Group messages get the most attention, though, mainly to bring Messages up to speed with the popular messaging apps. Group threads can have titles, can be silenced individually and you can leave them altogether. You can now view a list of everyone in the group and choose to add and remove people. Photos sent in a thread can be viewed together and saved as a batch, too.

Two final features we really like, though, are the ability to send your location to people and (a really simple one) the option to mark all messages as read. The location options are numerous, too, as you can share your location for a period of one hour, until the end of the day or indefinitely.