Out of these four apps, Notes and Reminders remain much the same. Notes gains the ability to add photos, but that’s about it. That’s fine, but the Calendar app is overdue some serious attention. It’s at the stage where downloading an alternative app, such as Sunrise, Calendars 5 or Fantastical, is an absolute must. 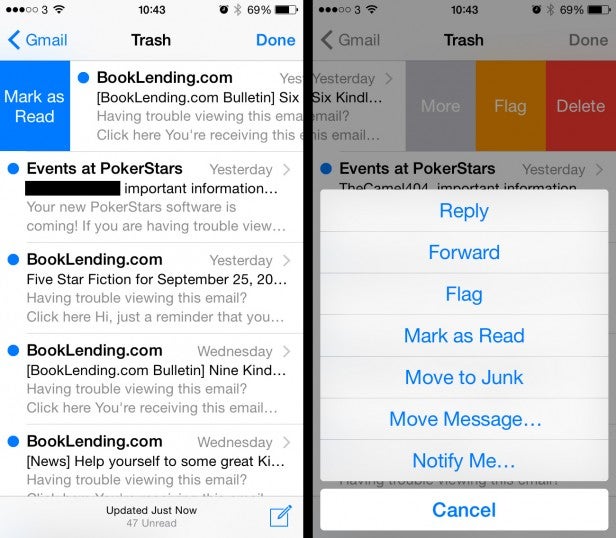 Perhaps the only useful addition to the Calendar app is the ability to add ‘travel time’ to an event. This is a neat idea that ensures you get alerts at the right time. It can also automatically alert you at the right time based on predicted travel time to your appointment, but it’s undermined by the fact it can only use driving directions as a guide, not public transport.

The Mail app, on the other hand, enjoys several welcome improvements. In fact, it’s improved to the point where we prefer using it to the Gmail app. Gestures play a key role. Swiping all the way from right to left automatically archives messages, a short swipe reveals additional options (Flag etc.) and swiping from the left marks messages as read or unread. 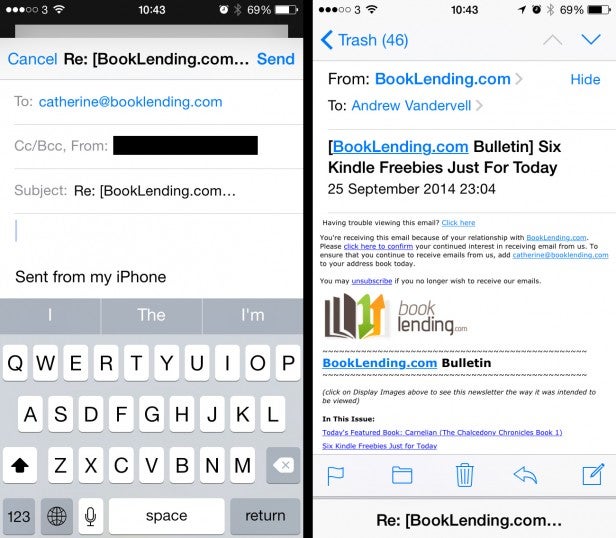 You can now minimise email replies without closing them, just swipe down from the subject line and it’ll sit at the bottom of the screen.

Apple continues to fine-tune one of the best camera experiences on any phone. It lacks the manual controls enthusiasts crave, but they’re well-catered for by third-party apps and the new Photos app integration (as covered earlier) makes them easier to use. This lets the main Camera app focus on being fast, intuitive and direct.

It gains two nice new features. First, you can now adjust exposure manually and it’s dead simple to use. Just tap to focus and then drag your finger up and down when the brightness slider appears. The other is a Time-Lapse video mode (see above), which is fun to play with.

We covered the Photos app in a little detail earlier, but we focussed mainly on its support for third-party camera and editing apps. It also gains more comprehensive editing options, mainly because Apple’s phasing out the lamentably bulky iPhoto family of apps in favour of a single Photos app across iOS and Macs. 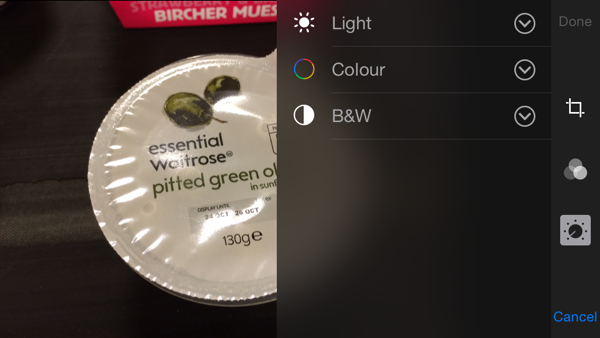 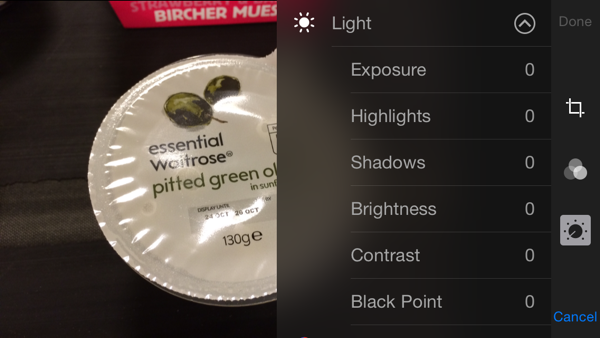 More detailed options, each of which can be adjusted individually

The editing tools are largely lifted from the old iPhone iOS app, but Apple has picked the right bits and made them simple to use. There’s the usual selection of filters, the ability to crop and straighten photos and some quite detailed options to tweak colour and contrast down to controlling the black point exposure. All work fine and offer about the right level control.

Finally, part of the whole Yosemite integration is the creation of iCloud Photo Library. This is basically an extension of My Photo Stream, but instead of just your most recent photos it’s your whole library. Thankfully there’s an option to save ‘iPhone optimised’ versions so you don’t fill up your phone too quickly.

Mobile Safari was the defining feature of the original iPhone, so it’s only right that it remains one of the most intensely developed apps in iOS 8. The most vital change is a fix that prevents adverts from redirecting you to the App Store — a problem that infuriated us on iOS 7. But other changes are more progressive, albeit small.

We’ve already mentioned Spotlight search being integrated into Safari, but there are some other nice tweaks. You can now scan credit cards when filling in web ordering forms, which is great, and there are various tweaks to improve the experience for iPad, iPhone 6 and iPhone 6 Plus users. 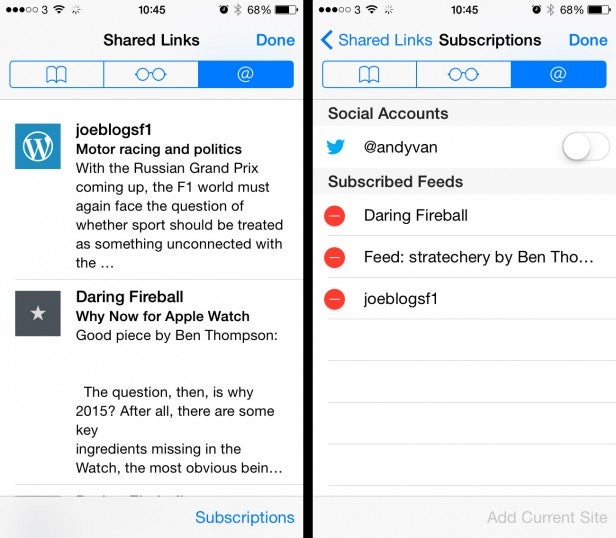 The feature we like the most, though, is the ability to customise the Shared Links feed and add RSS feeds to it. In iOS 7 this only pulled in links from Twitter, but now you can subscribe to the website you’re viewing and even remove the Twitter feed if you so choose. The changes sync across all platforms, too, so you’ll see the same feeds in Safari on a Mac provided you’re on Yosemite. It’s a great way to keep up-to-date with blogs that don’t update too often but are worth reading when they do.

Safari also gets a performance bump in iOS 8. It wasn’t slow anyway, but improvements to the Java Script engine ensures it remains one of the speediest browsing experiences on any phone.

Maps doesn’t see any truly meaningful updates in iOS 8 besides support for indoor direction using iBeacons (a niche feature right now), but it’s always worth revisiting to see whether it’s closed the gap to Google Maps — particularly as many people dismiss it out of hand. And while Google Maps still enjoys a healthy advantage, Apple Maps has hugely improved in recent times.

For us, it’s the superior in-car navigation app compared to Google Maps on iOS. Comfortably so, in fact. Its audio and visual instructions are clearer and more timely, and we like the way it handles street names. Each one has a bubble label that’s correctly orientated to your view and the street you should turn onto is labelled in blue. In areas that have it, 3D maps add some useful context too. 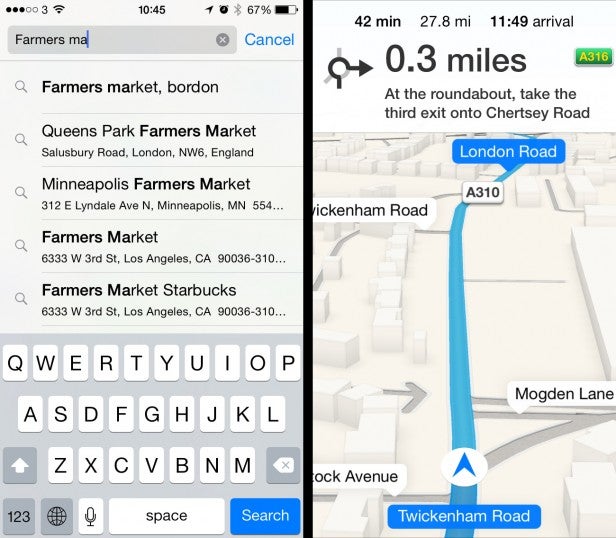 Location and business info is much improved. It’s still not a patch on Google’s inevitable search prowess, but it doesn’t trip up often. The key problem here is it still does odd things when inputting a search, such as showing potential results that are in different countries. Narrowing your search solves this, but it ought to be smart enough to realise people in London don’t want to visit a farmer’s market in Los Angeles.

The other glaring omission is support for public transport directions. There’s a tab for it, but this gives you the option to send the routing request to a third-party app. This will, at least, immediately send the right information to the third-party app, but it’s too many steps.

As such, while improved, Maps is best called upon for driving duties rather than everyday getting about. For that Google Maps remains king, so it’s just as well the iOS 8 version is good enough that Apple’s deficiencies don’t matter.