The WiFi options starting to find their way onto action cameras are much more essential than those now becoming de rigueur on premium mainstream camcorders, so it’s great to see these on the Air Pro 2. It’s reassuring to report that iON’s iPhone and Android apps are pretty accomplished, too, delivering useful features that enhance the Air Pro 2’s abilities. With the WiFi PODZ installed on the rear, and the camera turned on, a touch of the button on the PODZ accessory itself enables the WiFi. 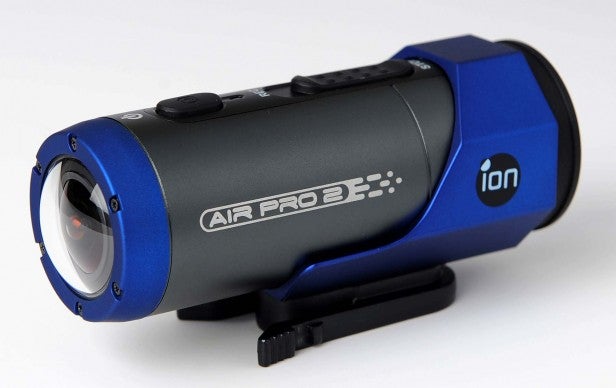 It’s not possible to connect the Air Pro 2 to an existing wireless network, so your next job is to connect to the camera’s local WLAN with your mobile device, after which the mobile app will be able to access the camera’s functions. Whichever platform you are on, these functions are the same, although the interface layout is slightly different in each case. The Dashboard tells you which WiFi network you are connected to, the battery level of your iON Pro 2, and any files currently being uploaded. A separate tab lets you browse the contents of your camera’s memory card, and play back its contents. You can also configure settings, including login details for your social media accounts, which consist of Facebook, YouTube and iON’s own Cloud service, where you are given 8GB of storage for free.

You can also configure the camera’s settings, including photo resolution and shooting mode, video resolution, TV system, auto power off, and whether the picture rotates automatically with camera orientation, which is useful as otherwise you will need the desktop software to do this. But the most useful feature of all is the remote control. You can choose still camera or camcorder mode, then view what the lens is seeing, and take a photo or trigger recording. The preview ends during recording, unfortunately, but at least you get to check the shot is framed correctly beforehand. However, it’s worth bearing in mind that the WiFi PODZ sucks power, and will significantly reduce the two-and-a-half hours battery life of the Air Pro 2 to around half that in our experience.

The Air Pro 2’s image quality is decent for an action camera, although it’s not in the same league as the GoPro Hero3, particularly when the latter is using its Protune option. In good lighting, colour and contrast are faithful enough, but there is a softness in detail compared to the GoPro, or a premium mainstream camcorder. Performance in poor lighting is a mixed bag.

The level of brightness and colour saturation remain decent in low levels of illumination, but there is a grainy discolouration across the image, that is particularly evident in areas of white. This is still a better image quality than many action cameras we have reviewed, however. The fixed lens is a relatively extreme wide angle, with a 180-degree field of view. This produces a fish-eye effect at the edges, but means a lot more of the action on each side is captured, which will come in handy when engaged in some extreme sports, such as sky diving.

Should I buy the iON Air Pro 2 WiFi?

The iON Air Pro 2 is worth considering. It’s well made and the WiFi PODZ adds a good level of features with the iOS and Android apps, even if battery life is considerably reduced when in use. However, for around £50 more you could get the GoPro Hero3 Black Edition, which offers a greater range of shooting modes, including 4K, and better overall image quality.

The iON Air Pro 2 shows a lot of promise. It may not have the brand recognition or 4K shooting of GoPro’s Hero3 Black Edition, but it’s still a robust and well designed device. The wide angle of vision will suit some sporting activities better, too. Image quality is not as good as a mainstream camcorder, but better than most action cameras, again with the exception of the GoPro Hero3. There are lots of mounting options, too, although most are optional extras. This is definitely a contender for extreme sports video making.