If the phrase “caught between a rock and a hard place” ever applied to a mobile game, it’s Into Light. In fact, in the case of Firelight Games’ latest, caught between a rock and a very, very dark place would be an even more apt description. Fleeing an approaching war with bombs falling either side of you, your father hides you away in a cave for safety, unaware that said cove plays host to some particular malevolent spirits out for your blood.

You are, quite literally, caught in the middle, traversing an endless run of dank avenues in order to find your way out, being drip fed the tale of the struggle between the two forces via some interactive lines of text.

Progress in this subterranean realm is tied to your ability to solve a succession of puzzles. Each one you complete opens up the next chapter. It’s an especially original way of telling a tale that feels akin to the kind of kind of title Simogo of DEVICE6 and Year Walk might have created a few years back. But while the puzzles themselves are simple, Into Light’s narrative is bolstered by some beautiful paper craft style animation, where following the directions of a blind Magician towards The Queen’s castle – billed as your route of escape – defines your journey. 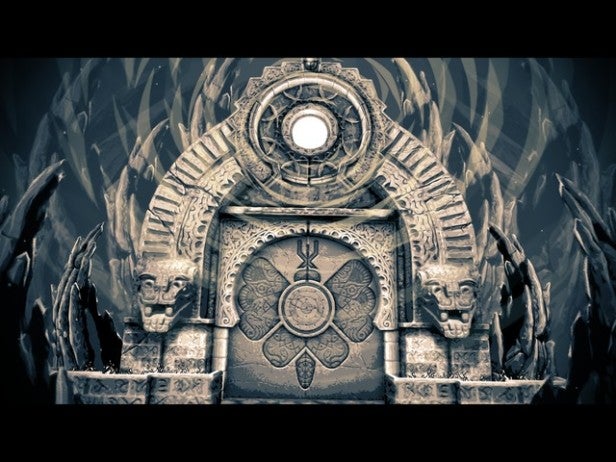 Both his sentences and your own are frequently broken down into mini puzzles where you either have to guess and then spell out the next word by tapping letters in the right order, or pick out letters to spell a pre-defined word from a batch of jumbled up characters. With only a few seconds on hand for either of these puzzles, success is a question of keen observation and sharp reaction times. In both cases, coming out on top progresses you to the next line of conversation, with The Magician’s prose both filling you in on the underground kingdom and detailing your own story.

Piecing together words (which tend to be drawn from the most pertinent point in a sentence) is Into Light’s way of bonding you with the story. It’s a tactic also employed in the game’s two other types of puzzles; a sequenced based mini-game where you have to extinguish torches in a set order, and a Rubiks cube type challenge, where revolving discs featuring different colour nodes have to be lined up correctly. 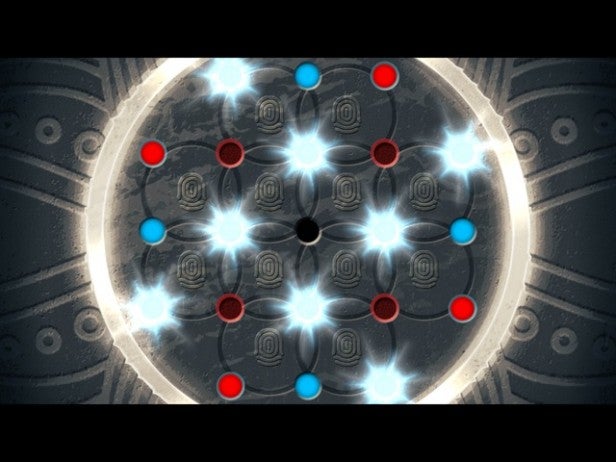 These latter puzzles serve as bookends between chapters and sadly for Into Light, slowly devolve from intriguing head scratchers to full on frustrating and all-too-common annoyances. Your only job is to revolve said discs by tapping on them, lining up the nodes with corresponding coloured holes beneath them. As you get one node in place, however, so others are drawn out of line. The complexity of these puzzles ramps up the longer you play, to the point where solving them becomes a matter of luck rather than judgement.

Indeed, though it would be an exaggeration to describe Into Light’s shady tale as anything but a short story in the first place, the latter half feels like a definite attempt to string out the whole process. With only a handful of different types of mini-games on offer, the gameplay itself soon starts to feel a touch stale, with narratives undeniably dramatic conclusion the only draw.

The story is definitely the game’s strongest card, with slices of additional text that detail your family’s efforts to hunt you down adding some extra depth to proceedings. However, to do Into Light’s unsettling verses any kind of justice, developer Firelight needed to sharpen up the gameplay element, bringing in a wider variety of challenges to ensure the game’s only intrigue isn’t its prose, but the games wrapped up in those words as well.

With a story that proves to be as dark as it is succinct, Into Light’s tale of The Queen and The Crow King is beautifully animated, but suffers a touch when it comes to its actual puzzle-based gameplay, which feels comparatively light and token in its nature.