The Intel Ghost Canyon is a fantastic mini gaming PC, which packs a surprising amount of power considering its tiny size. However, that miniature form factor comes at a high cost, demanding a few hundred quid more than full-size gaming PCs with similar specs. And while the modular design allows for upgrades, the limitations for the graphics cards still puts a low roof on the performance potential of this system. While this may be an excellent mini gaming PC, its high cost means it should only be considered by those who will get a lot of use out of the ultra-portable design.

High-end gaming PCs are usually titanic in size, which can be an absolute pain for those who need to move around frequently. The Intel Ghost Canyon (aka Intel NUC 9 extreme kit) is a nifty solution, packing high-end power in an ultra-portable frame.

Mini PCs may be nothing new, but the fact you can upgrade the Ghost Canyon makes it an exciting option. Any modern discrete graphics card equal or shorter than 8 inches can be fitted here, as well as select RAM and SSD components.

The only thing that can’t be upgraded via normal means is the processor, but with Intel offering interchangeable and customisable Compute Elements, it is still technically possible to see a more powerful CPU integrated at a later point.

This is the real deal then – an all-powerful gaming machine in a tiny 5-litre chassis. But with an astronomical price, is it really worth the extra cash?

At the size of a small cake tin, the Ghost Canyon is unbelievably tiny. But the most striking thing about the device is that I can easily pick it up in one hand – the same can definitely not be said about my standard gaming PC.

The biggest concern with making gaming PCs so tiny is making sure there’s still enough airflow to prevent components getting toasty. Intel hasn’t overlooked this though, providing side mesh panels to allow air to easily enter the device, which then gets expelled out the top. It’s a simple design, but a very smart and efficient one. 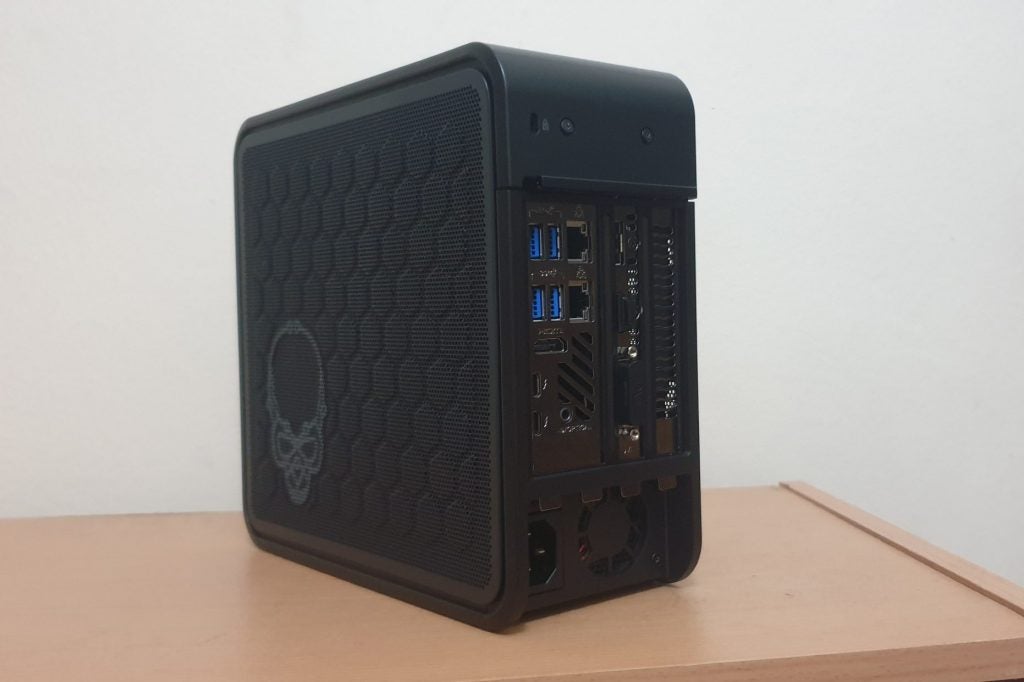 Due to the size of the Ghost Canyon, it almost looks like a console. The skull design on the side certainly gives it that video game styling, as does the easy-to-reach power button on the front. You could even put this underneath your PC and treat it as an Xbox substitute, although Windows 10 is best navigated with a keyboard and mouse rather than a gamepad.

The Ghost Canyon is blessed with an abundance of ports, with 2x USB-A, SDXC card slot and headphone jack on the front, and 2x Thunderbolt 3, 2x Intel Gigabit LAN, HDMI and further USB-A ports on the rear. There’s also WiFi 6 and Bluetooth 5 support here for fantastic wireless connectivity. 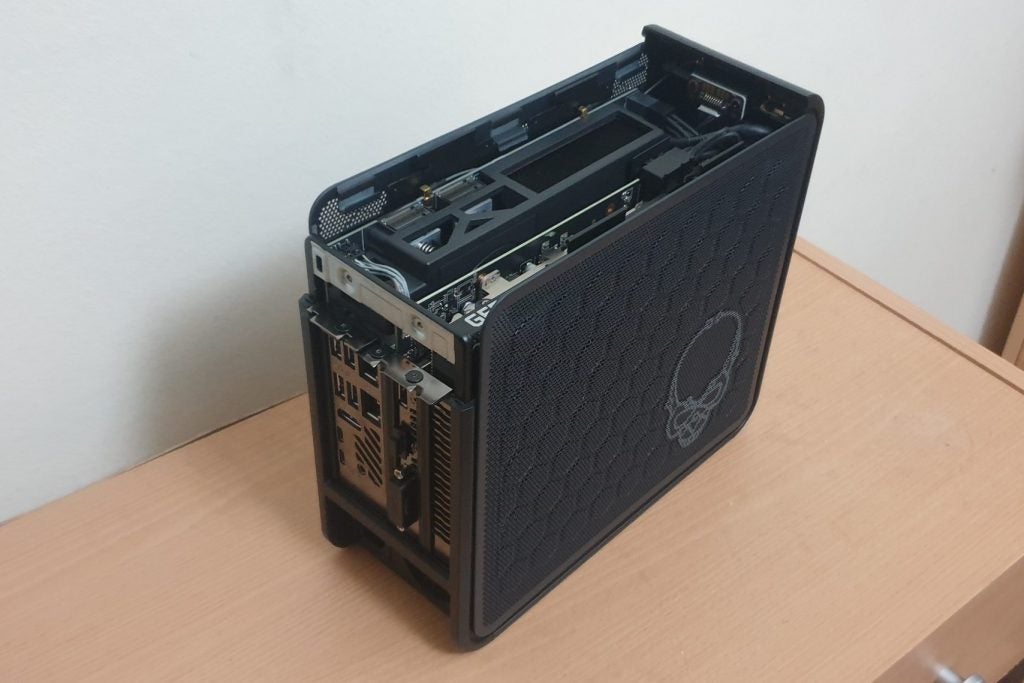 It’s also pretty easy to open the Ghost Canyon up whenever you need to upgrade it. Simply loosen a couple of screws on the back, then you’ll be able to pop the case’s roof off and slip the two side panels out of place.

Then, after removing a couple of cables, you’ll be able to pluck the graphics card and Compute Element out of the chassis. It’s admittedly a bit of a faff putting everything back in place given the limited space, but that doesn’t tarnish the fact this is a genuine modular design.

The Intel NUC Ghost Canyon specs are customisable at checkout, allowing you to pick from various processors, graphics cards, RAM and SSD options. The CPU is the first thing you need to consider, with the NUC PC coming in three different flavours: NUC9i5QNX, NUC9i7QNX and NUC9i9QNX.

The processor is the only difference between these three models, allowing you to pick between i5, i7 and i9 Intel Core chips. Despite being packed inside this desktop PC, these are actually mobile processors intended for laptops. These aren’t quite powerful enough to compete with the very best desktop processors (especially now Intel’s 10th Generation has launched), but the difference is so marginal these days that it’s not a major concern – your average gamer really won’t notice a difference. 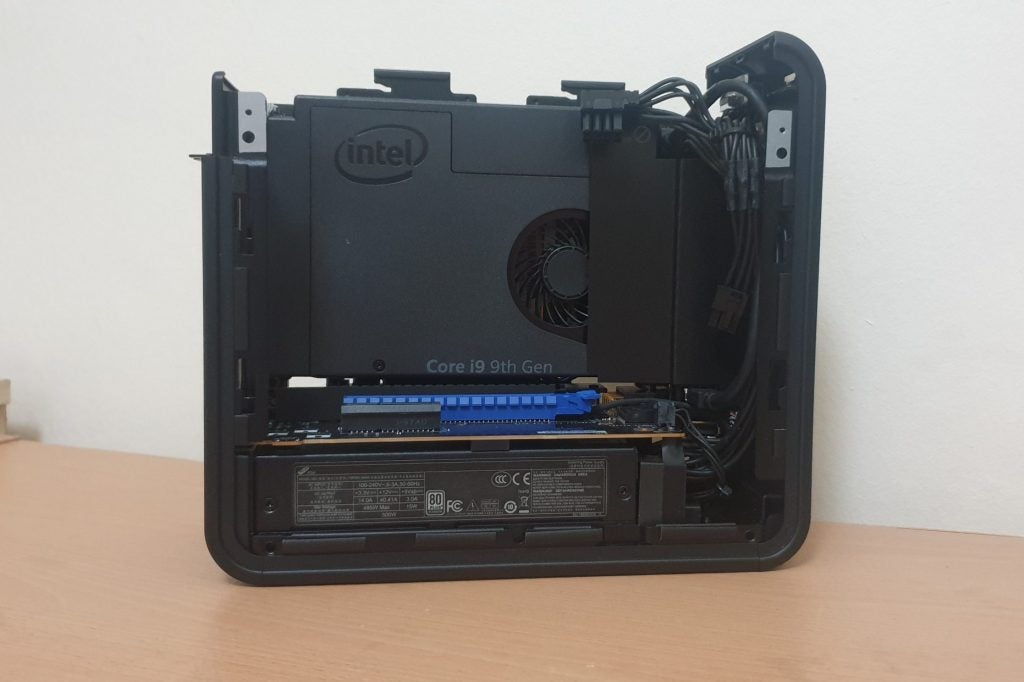 The graphics card options are arguably a bigger concern. Intel offers the GTX 1660, RTX 2060 and RTX 2070 – and that’s it. Since it can only fit desktop graphics cards up to eight inches big, you won’t be able to fit an RTX 2080 or RTX 2080 Ti graphics card, making 4K builds difficult. This is an even bitter pill to swallow when you consider laptops are able to integrate mobile variants of these high-end GPUs.

There’s more positive news for other components though. Featuring two M.2 slots, the Ghost Canyon boasts a max storage capacity of 4TB. You can also choose between SATA and NVMe PCIe storage solutions at checkout, giving you lots of flexibility on price and performance.

In terms of RAM, you can have up to 64GB DDR4 memory, which is more than enough for gamers. Support for Intel Optane Memory is included too for an extra boost to performance. 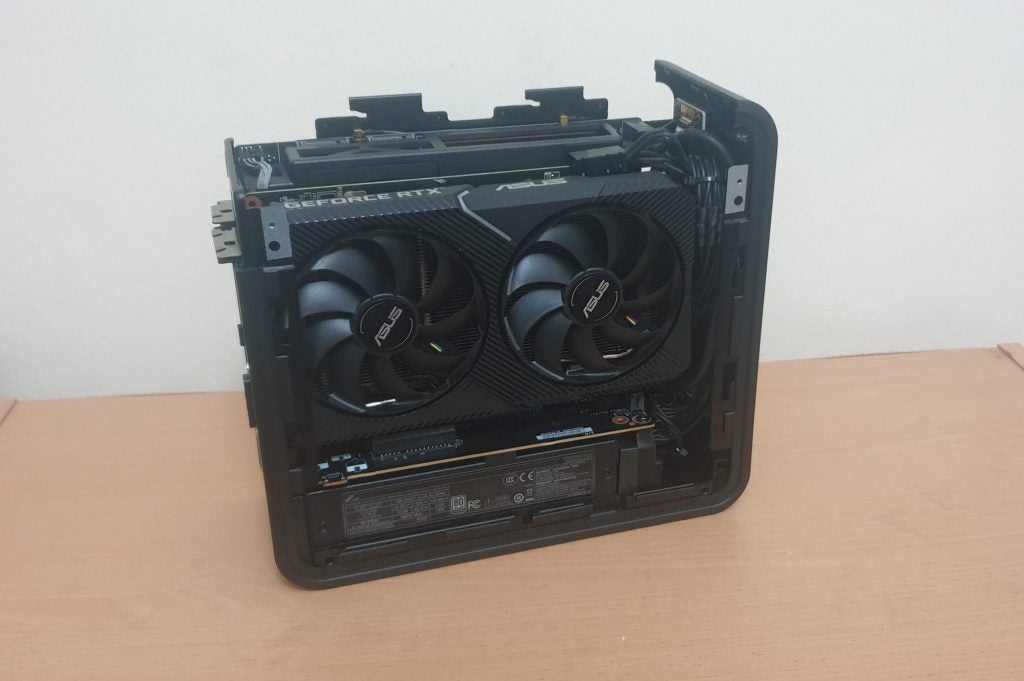 You also get to pick which operating system to fancy, with Ubuntu, Windows 10 Home and Windows 10 Pro being your options. You can also order the Ghost Canyon without an OS if you already have your own product key.

But what is the absolute cheapest configuration you can buy? By picking the unit with a 9th Gen Intel Core i5-9300H, you’ll get 8GB RAM and a 128GB SATA SSD bundled in at default, costing £1111. However, that won’t include a graphics card, operating system or required cables (excluding power cables) for setting up. Adding all of the necessary components for a decent gaming PC will see the price surpass the £1500 mark, which is quite expensive.

So Intel has had to face a number of limitations when building a mini NUC PC – namely the graphics card restrictions and spiralling price – but it’s still very impressive that it has been able to offer such a generous range of powerful components for such a tiny machine.

You can’t judge the performance of a computer by just looking at the spec sheet. For that reason, we ran a number of benchmark tests to determine how powerful the Intel Ghost Canyon is compared to rival machines.

For comparison, I used the MSI Trident X and Alienware Aurora R8 gaming desktops, which feature the RTX 2080 and RTX 2080 Ti graphics cards respectively, as well as 9th Generation Intel Core processors. Since both of these are high-end systems, they’ll give a good idea of how close (or far) the Ghost Canyon is from competing with larger high-end gaming PCs.

The initial benchmark tests were very positive for Ghost Canyon, with its Geekbench 4 multi-core performance actually surpassing its rivals despite being powered by a mobile processor. PCMark 10 showed something similar, although we, unfortunately, don’t have the results for the MSI Trident X.

The only scores that were slight causes for concern were from the 3DMark Fire Strike Ultra benchmark test. Trailing over 1000 points behind MSI Trident X and more than 2000 behind the Aurora R8, Ghost Canyon has a clear disadvantage when it comes to GPU performance. This comes as no surprise when Intel’s NUC PC only features an RTX 2070 – but with a similar sky-high price to its rivals, the GPU restrictions are nevertheless frustrating.

To dig deeper into the gaming performance, I compared gaming benchmark results with the Alienware Aurora. Unfortunately, I wasn’t able to test with a 4K monitor due to Covid-19 restrictions, but by showing the Full HD and Quad HD performance, it’s possible to predict what kind of frame rate you’d see when boosting the visuals up to Ultra HD.

Despite the Alienware Aurora R8 rocking the all-powerful RTX 2080 Ti, the Ghost Canyon never lagged too far behind (roughly around 20 frames per second), aside from Dirt Rally – the RTX 2080 Ti had a sizeable advantage for games released a number of years ago.

The Ghost Canyon also surpassed the 60fps gold standard for every game but the ultra-demanding Ghost Recon Wildlands. This shows it should run any modern game at a decent performance, even when set to Quad HD. 4K gaming will likely be a bit more hit and miss though, with an RTX 2080 recommended at the very least for Ultra HD visuals.

Impressively, the Intel Ghost Canyon remained fairly quiet when running these benchmarks, and while it did get noticeably warm, it never reached alarming temperatures. 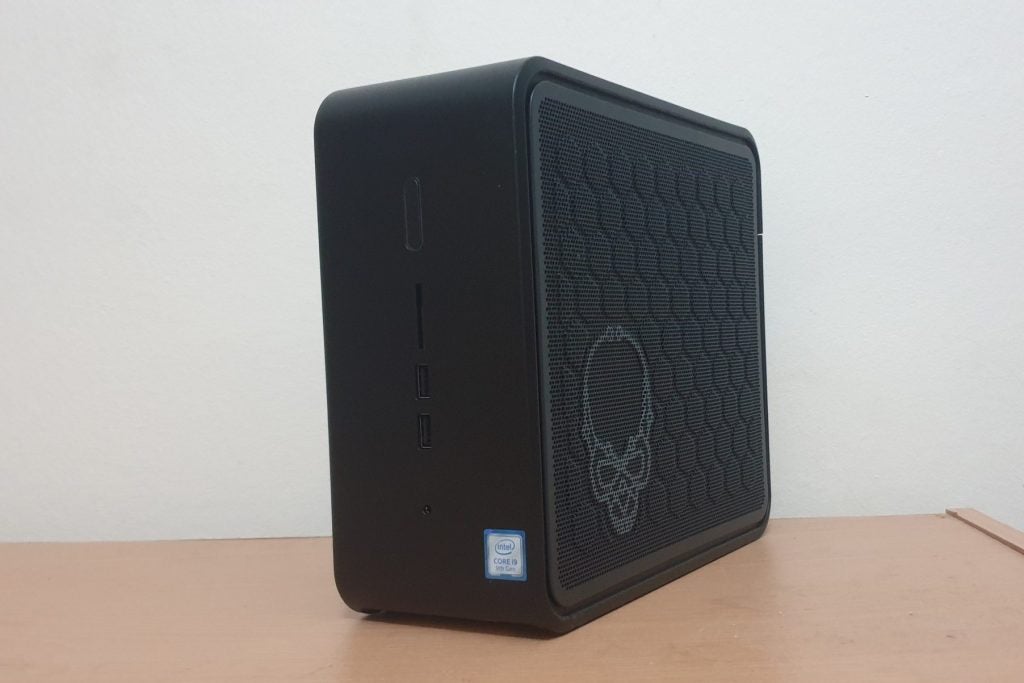 Should you buy the Intel Ghost Canyon?

The Intel Ghost Canyon is a great little gaming PC, packing a surprisingly great performance considering its diminutive size. Its upgradability is also a massive boon as this isn’t always guaranteed for mini desktop computers.

There are quite a few compromises you must accept with the ultra-portable form factor, however. Since it can only fit small graphics cards, it’s difficult to make a 4K gaming build, while the use of Compute Elements also makes it tricky to jump to the 10th Generation Intel Core chips in the future. If you like Compute Element concept but want the beefier graphics, Razer plans on releasing its take – the Razer Tomahawk – and this will allow for a full-fat RTX 2080 along with a simpler upgrade process.

The biggest stumbling block here is the price though, with the cost easily surpassing the £2000 mark (and sometimes approaching £3000) when fitting in high gaming-grade components. It’s easy to find a similar spec gaming PC for a few hundred quid cheaper, so you’re really paying a premium for that compact size.

If you doubt you will get much benefit from having an ultra-portable gaming PC, then you should look elsewhere. But if you’re someone who needs to move around with your PC frequently and you don’t fancy a gaming laptop, then the Intel Ghost Canyon remains a worthwhile purchase despite its extravagant pricing.