When I reviewed the Intel DX38BT in January I raised a quizzical eyebrow about its lack of support for the Core 2 Extreme QX9770 processor, which runs on a 1,600MHz front side bus. At the time it seemed like a double whammy as the Taiwanese motherboard manufacturers had added unofficial 1,600MHz support to their X38 designs and as an added kick in the teeth we knew full well that the X48 chipset was just around the corner.


We had already had a look at the MSI X48 Platinum and then reviewed the Gigabyte GA-X48-DQ6 and {linkout:https://www.trustedreviews.com/motherboards/review/2008/04/17/Asus-Rampage-Formula/p1 Asus Rampage. So it seemed fair to have every expectation that the new 1,600MHz front side bus was the next development for Core 2 and the Core 2 Extreme QX9770 was a very encouraging CPU. All told X48 seemed like a big deal and the natural successor to X38.


Well, the time has finally come for Intel to wade in with its DX48BT2 motherboard which in essence is a DX38BT with the addition of support for 1,600MHz DDR3 memory and that all important 1,600MHz front side bus. The obvious comment here is ‘about time too’ but things aren’t quite that simple. Over the past few months it has become clear that Intel has no plans to release any more Core 2 processors on the faster front side bus before the arrival of Nehalem in Q4. This means that the QX9770 wasn’t the start of something wonderful but is to all intents and purposes a reviewer’s special – well would you spend £1,000 on one? – so the processors that you are interested in supporting should be a 45nm Penryn Core 2 Duo or Core 2 Quad running on a 1,333MHz front side bus. 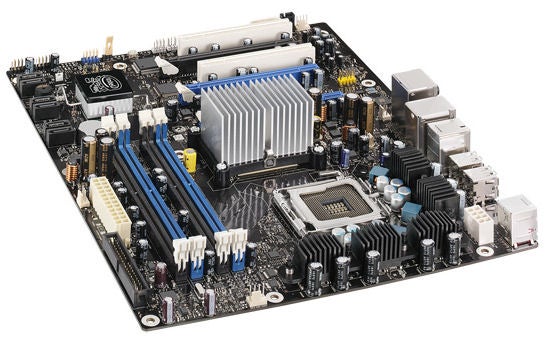 Placing the DX38BT and DX48BT2 side-by-side I cannot see a single difference between the two motherboards. Of course you’d expect the two models would be very similar and in many ways that’s no bad thing as the layout of the DX38BT is pretty good but there are more oddities yet to come. Take the five passive coolers on the voltage regulators as an example. Intel picks them out on the product brief as having new and improved designs but they look the spitting image of the coolers used on the DX38BT. It’s possible that Intel has changed the material that it used for the coolers but I’m prepared to go out on a limb and say that they are the same.


The current BIOS versions for the two models are the same, at 1521, and the various driver versions are also identical so you can read the DX38BT review to get the low-down on the layout of the DX48BT2. The short version is that it’s very neat and tidy with support for DDR3 memory and triple PCI Express 2.0 graphics slots with CrossFire but you don’t get legacy connectors such as PS/2 ports or a connector for a floppy drive.


As the single new feature with the DX48BT2 is the 1600MHz support for memory and front side bus that’s what we’ll concentrate on, starting with the Core 2 Extreme QX9650 processor.


This is a quad-core that runs at 3.00GHz on a 1,333MHz front side bus. With most makes of motherboards you can set the memory speed independently of the front side bus but Intel doesn’t make life so easy. By default our OCZ PC3-1600 Titanium ran at 1,066MHz and once we fed it the extra voltage that it needed we could run it at 1,333MHz without any problem. The performance varied slightly from previous tests that we ran on the DX38BT when the memory speed had been limited to 1,066MHz but the differences were relatively tiny.

Overclocking the QX9650 was a grisly experience as Intel offers a limited selection of tools in the BIOS. We reached a speed of 3.42GHz, which is pretty feeble, but we did it in a different way to the 3.42GHz that we got from the same processor on the DX38BT.


On the X48 we got the best performance by keeping the multiplier of the Extreme Edition processor static at 9x and raised the front side bus from 333MHz to 380MHz. That allowed the memory speed to rise to 1,520MHz but once again we were unable to separate the X48 from the X38.


The Asus Rampage did a far better job with the QX9650, overclocking as it did to 3.66GHz. This delivered loads more performance despite its reliance on DDR2 memory running at 1,066MHz. Check the Rampage review and you’ll see that we weren’t especially impressed with its behaviour yet it still managed to dance all over the Intel boards. We reckoned that the Rampage would benefit from a BIOS update which is a safe bet for any reviewer and is the equivalent of your doctor telling you to stop smoking and to take more exercise. Nonetheless Asus has issued BIOS 0401 for the Rampage, which is claimed to help memory compatibility, so the performance may have improved since we reviewed this model. However, we didn’t have the Rampage to hand so were relying on our original test figures on BIOS 0219. 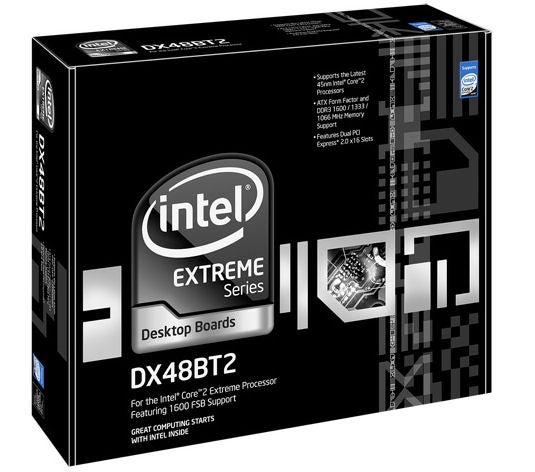 Switching over to the Core 2 Extreme QX9770 we could no longer use the DX38BT for comparison, as it doesn’t support this processor, so it was a straight fight between the Rampage and the DX48BT2.


We were surprised and annoyed to find that the DX48BT2 wouldn’t allow us to run the memory at 1,600MHz even though the setting is present and correct in the BIOS. We overclocked the QX9770 from 3.20GHz to 3.78GHz with a combination of an increased clock multiplier and a 20MHz addition to the front side bus which raised the performance by a healthy 11 percent. Overclocking the Rampage was much easier as we simply raised the clock multiplier from 9x to 11x to get a slightly higher speed of 3.80GHz. The extra 20MHz is neither here nor there but the increase in performance was 14 percent. When we tried the same settings on the DX48BT2 it refused to POST.


We can learn a few lessons from this comparison. For one thing the DX48BT2 doesn’t live up to its billing on memory support as it won’t hit 1,600MHz. More disturbingly you can get better memory performance from the Asus Rampage using slower DDR2 and that’s especially true if you overclock the processor.


The Rampage delivers better performance at stock speeds, overclocks better and in every measureable way it is a better motherboard than the DX48BT2. That may sound like a harsh judgement as the Intel board does a reasonable job but it is short on features and performance yet it is priced at the same level as the competition when it actually needs to be a fair amount cheaper.


We were disappointed that the DX48BT2 didn’t make full use of our 1,600MHz memory but it’s the low performance that would make us nervous about recommending this motherboard.