The best hybrid VR/360 video shooter you can buy right now. The Evo isn't perfect, but it does offer the best blend of video quality, features and usability in a pocket VR camera.

There are two types of 360-degree camera available right now. Standard models such as the Insta360 One X, which use two fisheye lenses to film everything around you, and hybrid models that do the above as well as recording in 180-degree 3D VR for headsets such as the Oculus Go.

Like the Vuze XR we reviewed recently, the Insta360 Evo is an example of the latter. It’s a pocket-sized camera that, thanks to two separate lenses, can capture two types of immersive content: VR 180 3D and 360 video.

Videos can be recorded at a maximum resolution of 5.7K (5760 x 2880), and photos are captured at 18-megapixel quality. These can be edited and shared via mobile or desktop apps, and then viewed in a variety of ways, including on a VR headset or via YouTube. 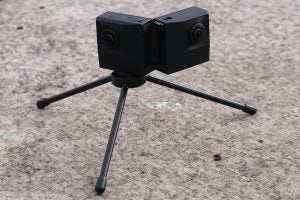 On paper, this is all very similar to the Vuze XR, but which of these cameras is better in (virtual) reality? Thanks to its excellent app, the Evo edges this contest…

The Vuze XR’s clever transforming design made us sit up and take notice, and when I pulled the Insta360 Evo out of the box, I’ll confess we didn’t feel quite as impressed. This is a black, blocky device that looks a bit lumpen and basic on first glance.

I grew to like it a lot more as I used it, however, to a point where I actually preferred it to the XR. Since it doesn’t have an integrated handle, the Evo is a lot smaller than the XR (about 90mm square when at its most cubic, weighing only 113g), and will fit in a pocket. 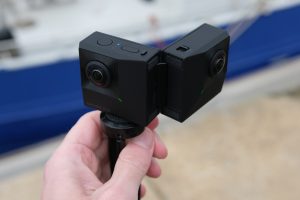 It’s also covered in a matte-textured finish, which makes it easier to hold, while its fully manual method of transformation is basically unbreakable – you simply disengage a lock and either open out or close the hinged body, before engaging another lock to keep things in place.

The Vuze XR’s spring-loaded transformation mechanism, while undeniably impressive, has more moving parts and therefore feels more likely to malfunction or become broken in the event of a drop.

Speaking of hardiness, while the Evo feels sturdy, it isn’t officially ruggedised. Plus, its microSD card slot and micro-USB port are totally open to the elements, and aren’t waterproof either. The battery is integrated, and charges via micro-USB. 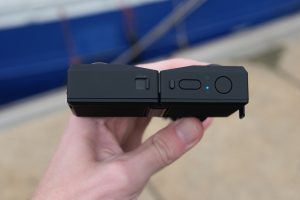 On the bottom surface there’s a reset button for emergencies, plus a standard tripod mount. This can be used to attach the Evo to the included tabletop tripod (which folds down to work as a handle) or a selfie stick.

While you don’t get the latter in the basic package, you can purchase an Evo bundle with one included – and, whatever your thoughts on selfie sticks, you’ll really want one for recording 360-degree videos.

The main selling point of the Evo is its ability to shoot both 3D VR and 2D 360-degree content.

For the former, the cameras need to be facing the same direction, where they essentially replicate a pair of human eyes by each capturing a slightly different viewpoint of a scene. When viewed on a VR headset, the two images become a single 3D image. 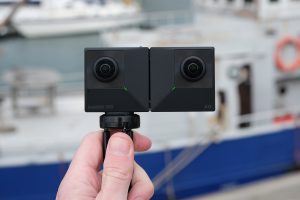 For 360-degree content, the two cameras face away from each other so that each can capture a 180-degree image. These two images are then stitched together automatically by the camera software into a single 360-degree video or photo.

Maximum video resolution is a sky-high 5.7K, but this figure should be viewed in its proper context: it’s highly unlikely that you’ll be looking at the entire 5.7K image at any one time – just a small part of it. You can also drop the resolution to 4K or 3K in exchange for faster recording frame rates of 50/60 or 100/120fps, the latter being useful for smooth, ultra slo-mo playback.

You can also capture 360-degree and VR stills at an 18-megapixel resolution, with HDR and Raw shooting included. For both these and videos there’s a whole raft of settings you can adjust before shooting: exposure compensation, shutter speed, ISO and white balance being the main ones. 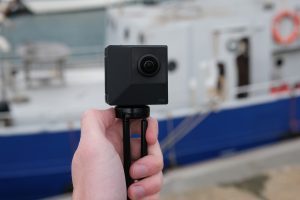 I found the auto-exposure to be adequate, but it definitely doesn’t hurt to be able to shoot your own preferred way. Special shooting modes include time-lapse video (with a variety of speed options), HDR video and log video, the latter aimed at videographers with a penchant for colour grading their own clips.

The Evo does have buttons for operation – a single unified power/recording button and a mode button to toggle between still and video shooting – but you probably won’t use them very often, all thanks to the app.

The companion app is essentially the same as that used by Insta360’s dedicated 360-degree camera, the Insta360 One X – and that isn’t a bad thing at all. With an intuitive UI and both shooting options and editing options within easy reach, it makes controlling the Evo a cinch.

After installing it on your smartphone and connecting to the Evo via Wi-Fi, it’s easy to reconnect when you’re out and about – as long as you’re not already connected to another Wi-Fi signal, it should automatically pair the devices when you turn on the camera. 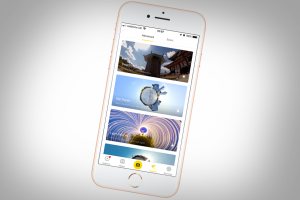 Open it up and not only can you adjust settings, take shots and review/edit your work in the gallery, but you can also access tutorials about different features and functions and view a social feed of recently uploaded community content. You can share your own creations to said feed, Instagram, Messenger, WhatsApp or YouTube, save them to your phone camera roll, or grab a download link.

By far the most impressive aspect is the editor, with which you can trim and export video clips, and add filters, music and a huge range of visual effects, from hyper-lapse speed adjustment to a “tiny planet” 360-degree view. You can also cut out a frame of a 360-degree video to export as a standard “flat” video and choose this frame in a huge variety of ways. You won’t find any of this stuff on the Vuze XR’s barebones app, so Insta360 gets a big win over its rival here.

One thing to note about the app: it won’t let you export 5.7K videos, but forces you to downgrade the resolution to 4K or below – you’ll need to use the desktop editor if you want to retain the full resolution of 5.7K clips. However, you can review 5.7K files (albeit at a lower resolution than they were captured), which is something the XR’s app won’t let you do.

Given the camera sensors’ tiny size and the extreme wide angle of the lenses, expecting the Evo to produce the sort of perfectly exposed, flare- and noise-free images you get from a mirrorless camera is wishful thinking – even with that headline-grabbing 5.7K resolution.

Image quality isn’t bad at all, but expect a softer, less detailed image than the resolution suggests and you won’t be disappointed. You’ll likely barely notice, in fact, once you’ve hefted on a VR headset and plunged yourself literally headlong into the impressive 3D or 360 landscapes that you were videoing just hours earlier.

One of the reasons is Insta360’s FlowState image stabilisation, which levels out your videos and reduces the potentially nausea-inducing bob and sway that often goes along with handheld recording.

As a result, the footage from Parliament Square above looks less like it was shot on an action cam and more like it came from a low-flying drone. At no point did I move the camera when shooting that video, either – it was merely held over my head as I moved through the crowds, with all of the camera moves coming later during editing in the mobile app.

Neither did that editing take long. The Evo succeeds in being able to capture genuinely immersive content – and does it in a way that doesn’t involve you having to do lots of boring work in editing apps, which is a big bonus. It leaves you to enjoy the moment, while leaving decisions about composition and framing for the journey home.

One thing you might have to live with is the Evo’s 360 stitching skills, which aren’t as seamless as those seen on the Insta360 One X. The Evo struggles to match up the edges when objects are close (under two metres or so), a problem the One X doesn’t have.

The Evo isn’t perfect – the 360 mode’s stitching doesn’t work anything like as well as on the company’s One X model. Nevertheless, it does a fine job of capturing good-looking footage and photos, comes with excellent image stabilisation, and its mobile app is both easy to use and packed with features.

There’s certainly room for improvement here, but currently there isn’t a better pocketable camera that’s able to capture both kinds of immersive content.

The best hybrid VR/360 video shooter you can buy right now. The Evo isn’t perfect, but it does offer the best blend of video quality, features and usability in a pocket VR camera.