Astonishingly, the wait has been worth it. Six years on from the release of Limbo – the game that launched a dozen stylish monochrome platformers – Playdead has finally released its follow-up, and it’s a masterpiece. No need to read on – just power up your Xbox One and buy it (Steam users will have to wait another week).

Still here? Maybe you need a little more convincing. Well, the toughest thing about reviewing Inside is that the more I say, the more I’ll spoil it for you. Like Limbo, it’s a minimalist 2D platformer with a distinctive visual style, but where Limbo channelled German expressionism and creepy folk myth, Inside adds muted colour, shifting perspectives and a world more influenced by by European sci-fi and horror.

I’ll make no bones about it; Inside is one of the most eerily beautiful games I’ve ever played, doing more with its subtle tones, stunning effects and brilliant staging than most AAA teams achieve on a vastly bigger budget. There’s more detail to the world than there ever was in Limbo, yet barely a pixel goes to waste. I’d struggle to name a game that uses light and shadow better. 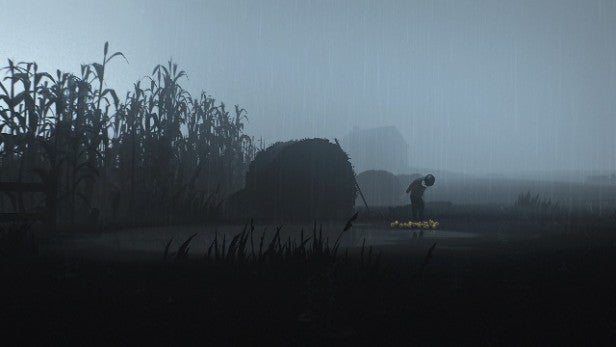 In the earliest stages you might suspect that the gameplay hasn’t moved on quite as much. It opens with a boy in a forest, clearly on the run from sinister authorities, all torch-beams and snarling dogs. You race forwards from left to right, sneaking where you can (our hero cowers automatically behind cover) and running and jumping where you can’t. As in Limbo, any large drop or close encounter is always fatal and escape seems your only objective.

The move set is minimal to match. One button jumps and another grabs, enabling the boy to interact with certain objects or elements of the scenery. Boxes can be shifted, buttons pressed and ledges desperately grasped. Ropes and chains can be climbed, planks pried away and gates pushed open. 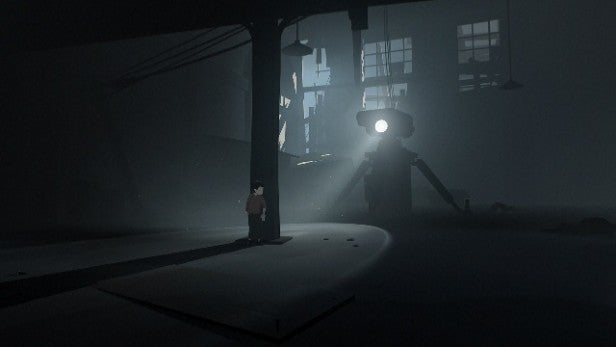 Yet, just when you even suspect that you’re playing a retread, Inside twists and mutates. You’re on the run in some strange totalitarian landscape. One group seems to be experimenting on another, watching zombie-like beings shamble and caper for their interest or entertainment. You discover that what looks like a lamp enables you to control these creatures, so that they can do the things and push the things that you cannot.

The puzzles now grow in depth and complexity, some pushing logic, some pushing timing. You’ll find bits of platforming and narrow scrapes that seem impossible until you realise that you haven’t been paying quite enough attention; that there’s some cue in the scenery you’ve missed, or something you can do that will buy you just a little more time.

And now Inside is only really getting started. There are a dozen things I want to talk about but won’t because I would rather you discovered them and had the rug pulled out from under you just like me. 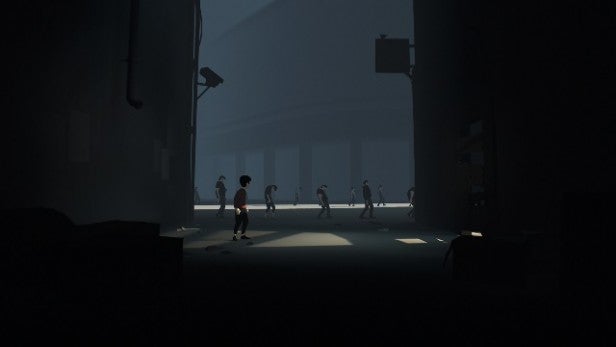 You see, it might look like a 2D platformer, but Inside is really one gourmet grab-bag of WTF. Together, the gameplay, those creepy visuals, the deeply immersive sound effects and the almost ambient score create an incredible atmosphere of tension, fear and dread.

And even when you think you have its measure, Inside shows you just how wrong you are. In fact, you might be wrong about the whole shebang. Expect the last twenty minutes to become as legendary as the final stretches of Bioshock Infinite, Shadow of the Colossus or Brothers: A Tale of Two Sons.

If you were a determined moaner, you might complain that it’s short (four to five hours) and that some of the puzzles require extreme dexterity in testing situations, making a few sections quite annoying. All I can say is that it’s better to have four hours of genius than ten of mediocrity, that the experience would lose intensity if stretched out any further, and that I managed to conquer it in a couple of sittings despite being no gaming god.

A big step on from Limbo, Inside joins the likes of Journey, Fez, Ico and The Witness as one of the pinnacles of arthouse gaming. In fact, don’t let that label put you off. In its beautiful visuals and ingenious gameplay it’s a fantastic puzzle-platformer full-stop, even if it’s the unfolding, unpredictable storyline that makes it one of the all-time great. Buy it, play it and be dumbfounded.