Available on Xbox 360 (version tested), PS3, Wii U
From 1994’s X-Men: Children of the Atom to 2011’s Ultimate Marvel Vs Capcom 3, fans of Marvel comics have been able to pit their favourite heroes and villains against each other in a series of brilliant fighting games. Fans of DC’s superheroes? Not so much. 2008’s Mortal Kombat vs DC Universe tried to replicate the success of the Marvel Vs Capcom series with Mortal Kombat’s cast and fighting system, but couldn’t match the majesty of Capcom’s OTT beat ‘em up. Injustice: Gods Among Us fares better. While it still has its roots in Mortal Kombat – specifically the 2011 reboot – the ditching of the Mortal Kombat characters has enabled the development team at NetherRealm to focus on superheroes and a DC comics storyline, and the game is all the better for both. 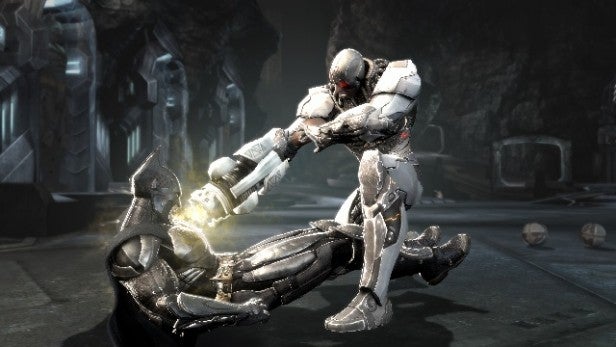 Injustice: Gods Among Us – Story Mode

NetherRealm, the studio headed up by Mortal Kombat’s original co-creator, Ed Boon, created the 2011 reboot, and Injustice feels like the next logical step forwards. Like Mortal Kombat, its central single-player mode is a story-led campaign, following an ensemble of DC heroes and villains into a dark parallel universe where a grief-stricken Superman has established a totalitarian regime. Despite the involvement of DC stalwarts Jimmy Palmiotti and Justin Gray, it’s not a particularly brilliant yarn, but it does the job of justifying why you’ll see Aquaman going toe-to-toe with Shazam or Superman squaring off with Batman, which is what really counts.

This approach worked in Mortal Kombat because it took a series of characters through a number of situations and so added a bit of variety and interest to what’s so often a rather predictable chain of bouts. Here it works even better, because it gives you a chance to experiment with the different heroes and villains, try out their play styles and check out their special moves. Sure, you might get stuck for a chapter with a character you don’t really like, but it rarely lasts for more than three or four fights and you’ll get to grips with the full range of heavy hitters, speedy strikers, grapplers and gadget-packing mid-range specialists. It helps make Injustice one of the best single-player fighting games in ages. 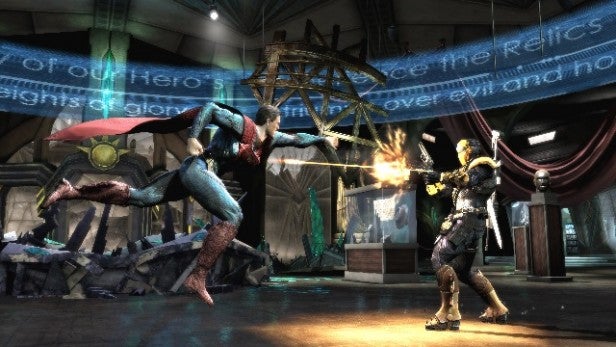 Injustice: Gods Among Us – Gameplay

For a while now, fighting games seem to have been retreating from innovation. We’ve seen them move from exploring 3D spaces back to keeping the action on a 2D line, and away from complex, multi-level stages towards simpler flat arenas. Injustice isn’t what you might call groundbreaking, but it’s a little more playful. The stages have interactive elements, so that you can smash your foe through the scenery, whack them with a car or freeze them with a burst of cooling gas. There are opportunities to knock your enemy from one area to another, watching the damage build up as they topple down a shaft or get smacked around in a lift.

What’s more, super-powers are embraced with the kind of exuberance we’ve seen in Marvel Vs Capcom. Each hero has the usual attacks, combos, blocks, throws and counters, but each also has some signature ability, like Batman’s glowing batarangs or Wonder Woman’s whip, that can be pulled out and deployed for ranged attacks or extra damage. 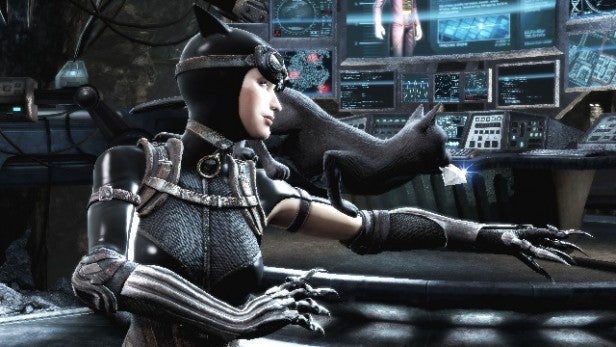 Injustice: Gods Among Us – Super Attacks and Clashes

On top of this there are super attacks, unlocked when you fill up a super meter and dishing out high levels of violence with often spectacular visual accompaniments. This is just what the doctor ordered. After all, you don’t want to see Superman simply bosh Doomsday in the face – you want to see him fly his foe up into space then hurl him downwards to meet the ground. And why should Aquaman settle for a Chinese burn when he can hoist his enemy on a trident and feed him to a passing shark?

Super moves can be deadly, but they still need to be used with caution. The super meter fills as you get hurt, but there’s usually only one chance to use one and if your opponent is in the wrong position or manages to block or evade the initial attack, your chance has gone.

Finally, Injustice throws in an interesting Clash mechanic. If you’re on
the receiving end of a brutal combo, you can call for a Clash, which
forces the two protagonists to part, exchange insults or banter, and
then charge in for a decisive blow. At this point, each player can bet a
portion of their super meter. The player who bets most wins the Clash,
and gets back the amount they would have spent in health. If you’re near
to extinction, it gives you a fighting chance of turning things around.

Next
Injustice: Gods Among Us – Graphics and Verdict Review