Indestructible is a sort of mash-up between Micro Machines, Destruction Derby and Robotron. Basically, it’s a driving and shooting game that sees you battle it out against waves of computer controlled cars or alternatively play online against up to four real life opponents to see who comes out on top.

It’s got a similar top-down view to Micro Machines, so the graphics look quite cute, and it ran at a reasonably consistent pace on our Sony Tablet S. The top down view works particularly well here, as it gives you a broader view of the playing arena, which is important as it’s actually possible to drive off the edge of the arena to certain death.  The areas aren’t particularly large, but this does mean there’s nowhere really to hide and it makes the gameplay that bit more frantic. However, it is a bit of a shame that there are only three arenas in total. 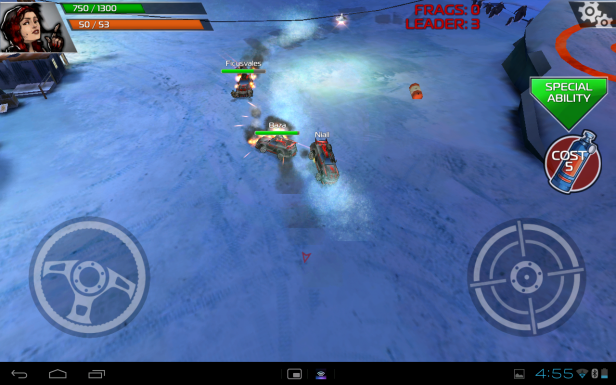 The game is free to download and play, but you only get access to one car by default. If you want something better you have to shell out real money, which is fair enough we suppose — Developers have to eat too!

You control your car using two onscreen virtual joysticks, a bit like you do in Robotron. The one on the left controls the direction and speed of the vehicle, while the one on the right controls the direction of your cannon fire. It sounds complicated, and is a little bit tricky to get your head around at the first, but you soon get used to it and it becomes second nature. As well as just firing at opponents you can also ram them to cause extra damage, so in this respect there’s an element of Destruction Derby to the gameplay too. 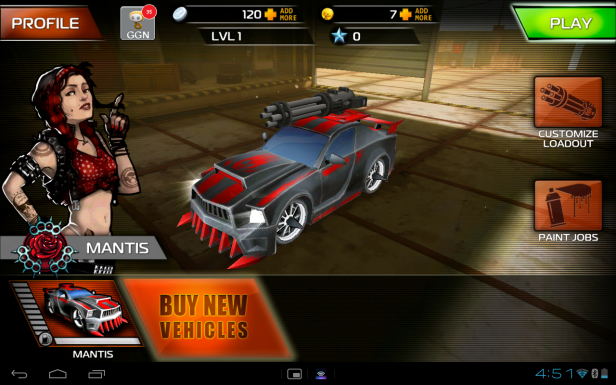 In the single player mode you simply take on wave after wave of computer controlled cars. Usually multiple ones turn up to attack you at the same time and you gain in-game points for destroying a full wave. These points can then be swapped for upgrades. However, the game is geared towards you spending money for upgrades, so you’ll be playing a long time to get enough points for significant upgrades if you’re just relying on your gaming skills to acquire them. The computer controlled opponents aren’t hugely smart either — usually just swarming in around you, so the gameplay in this mode gets a bit tiresome after a while. 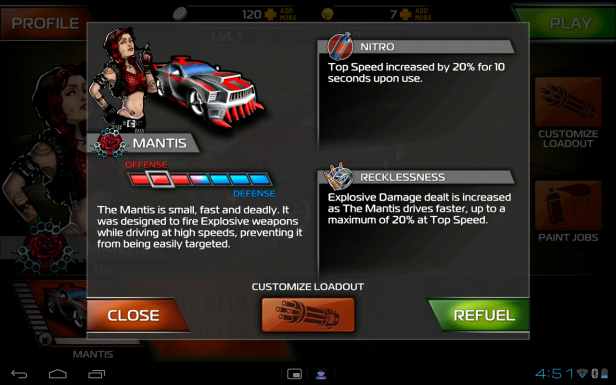 In multiplayer mode you’re pitted against up to four other players and have to duke it out to see who can get to five kills first. If you die, you’re respawned after a count down so you can get back into thick of it. The multiplayer mode is the most fun as it’s possible to have some great ding dong battles with other people. However, there are times when it can be a bit one sided too, especially if other players have bought lots of upgrades and you haven’t.

Indestructible Verdict
While its single player mode is pretty unsatisfying, the real charms of Indestructible show themselves when you’re pitted against real life opponents in the online death matches. Granted, it’s not the deepest game in the world and the limit of three arenas means its longevity will probably be limited. However, in short bursts, the online game play is a lot of fun.