The relentless advance of touchscreen technology has brought many
advantages to the tech world, but the increasingly generic look of
slab-like devices is a noticeable downside. So praise be to Sony for
deciding thin definitely is not in.

The Sony Tablet S (previously known as the Sony S1) is Sony’s long
awaited first Android tablet and its primary defining feature is to
snub its nose at the aesthetically pleasing but impractical race to be
thinnest. Instead Sony has thought along more practical lines producing a
tablet whose side profile is reminiscent of its wedge shaped Vaio
laptops.

This gives the Tablet S a more natural typing and viewing angle
when laid flat and the curved edge is noticeably more comfortable when
holding the device one handed in portrait orientation – the natural way
for reading books, magazines and other nicely formatted content. What’s
more, at 598g it has little practical detriment, weighing less than an
Apple iPad 2 (601g). Clearly its maximum thickness (20.3mm) is greater by some
margin than most of the competition (circa 10mm) but in everyday use
this hasn’t proved at all problematic. Perhaps the only criticism we would made of this wedge shape is that it doesn’t taper enough – the thin end feels chunkier that it perhaps needs to be.

What also lets the side down is the mediocre build quality. Aside from its glass screen, the Tablet S is all plastic, and mostly glossy plastic at that. This gives it a slightly hollow feel that just doesn’t quite have the premium feel of most rivals – the pathetic plastic flap that covers the ports is particularly unimpressive. As ever, it isn’t the case that the Tablet S will fall apart, its just about the feel of the thing.

Shape
isn’t the only place the Tablet S dares to be different. It may be a
subtle point but Sony has eschewed both the usual 10.1in and 7in screen
sizes for Android tablets and also ignored the 9.7in frame of the iPad.
Instead it has opted for a 9.4in display. While 7in devices are clearly
made to be used in a different way, this 9.4 form factor is still meant
to compete directly with the other larger formats, and though it may
sound like the start of a bad joke, giving up 0.3in does make a
difference. That said Sony has a fondness for high resolutions and in
fitting a 1280 x 800 panel the trade off results in additional pixel
density and text looks razor sharp. It’s also a high quality (IPS) panel
so has great viewing angles and it produces strong colours with deep
blacks as well, making it a good choice for movie watching and other
multimedia activities. 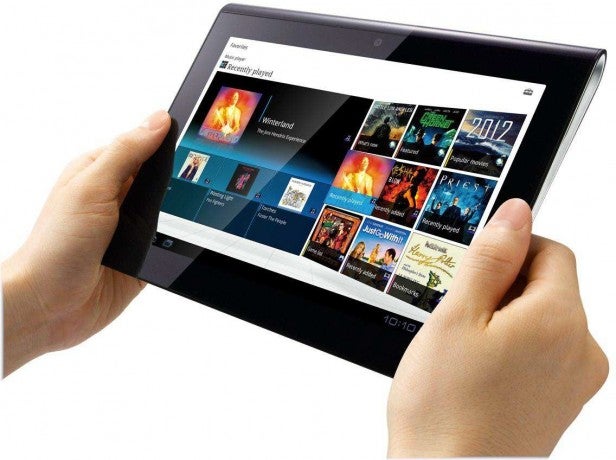 The rest of the Tablet S is equally
unconventional. There are familiar specifications such as the dual core
1GHz processor, 1GB RAM, micro USB and choice of WiFi/WiFi 3G and
16GB/32GB sizes, but everything else raises an eyebrow. 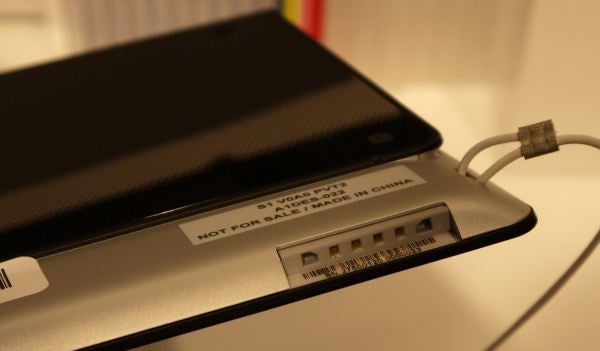 Most
obvious of these is Sony’s decision to fit a proprietary charge port.
The benefit is it uses a MagSafe-inspired magnetic connection which disconnects if the cable is
pulled. The downside is it means carrying the charger with you and this
is no small burden given it is linked into a 105g power brick. You can at least get a nice dock for the system for a yet to be confirmed extra cost. 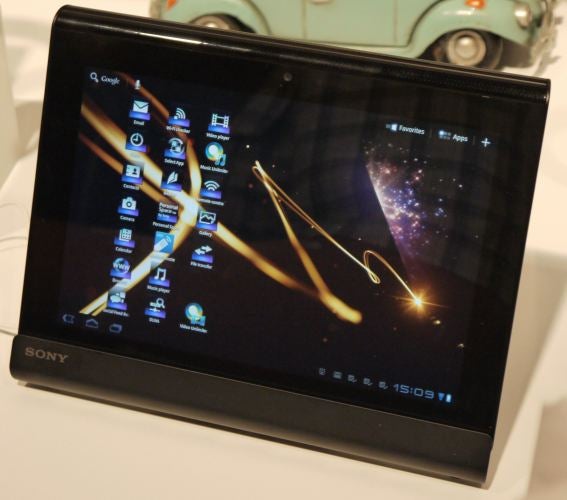 In
addition Sony has opted for an SD card slot rather than the more typical
microSD. Again there are pros and cons. SD cards are available in
larger sizes and allow easy access to digital camera and video recorder
content, but then microSD has become more of a standard for removable
storage on these devices. Then again, unlike some other tablets the Tablet S
can only use SD card space to store media files rather than to extend
the main memory. Lastly Sony has omitted HDMI, but countered that with
integrated DLNA network streaming. Should you have DLNA compatible devices like
the PS3, or in fact may new TVs, this is a godsend. For others the lack
of a more widely adopted connection will prove an irritant. 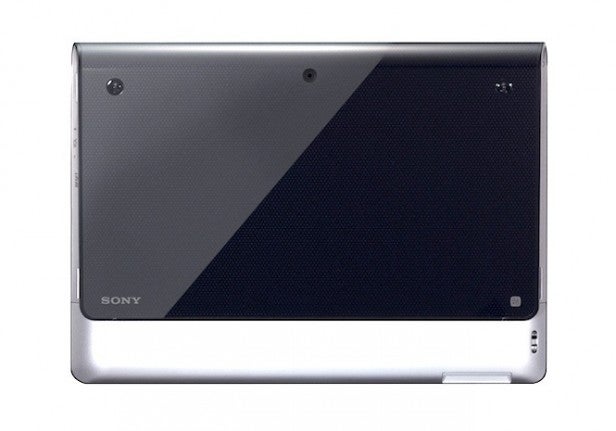 Thankfully
what is less contentious is the software. Sony has gone down the well
worn path of customising Android, but where many have failed it has
produced a subtle and stylish upgrade which smoothes out the rough edges
of Honeycomb 3.2. Critics are justified in saying such skins further
fragment Android (which long term is self defeating for manufacturers),
but Sony has unified the look with its PlayStation and
Xperia Play devices. The result is a darker, more adult appearance
than the defacto Honeycomb and a number of welcome extra animations make
it run more smoothly.

Boot up the Sony Tablet S and you’ll immediately see ‘Music Unlimited’ and
‘Video Unlimited’ icons on the homescreen. These are links to audio and
video portals specially customised for the Tablet S within Sony’s
Qriocity download and streaming service. Here Sony pulls together the
vast library of its Sony Music and Sony Pictures content and Tablet S
owners will get six months free access. In something of an own goal Sony
hasn’t got these services running fully in time for the Tablet S’s
launch (just five movies are ready and Music Unlimited is listed as
‘arriving soon’), but once active it should be an attractive option to
potential customers and you can bet Sony will offer plenty of
exclusives. 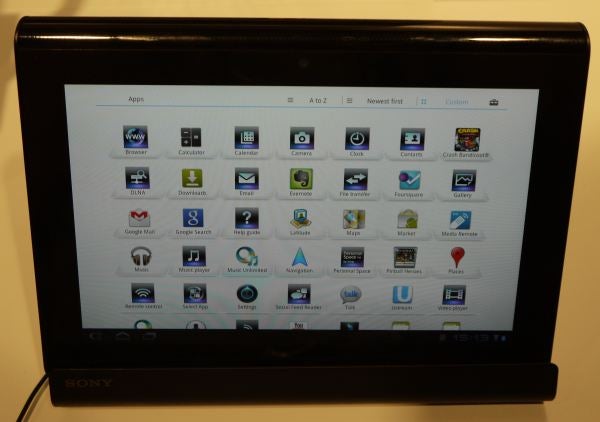 (centre)Sony has tweaked much of the styling of the interface but it has managed to steer clear of ruining anything in the process.(/centre)

For
gamers the Tablet S gets the same PlayStation certification as the
Xperia Play making it compatible with Sony’s official PSOne and PSP
Android Marketplace ports, of which there are admittedly rather few at
the moment. The Tablet S lacks the physical controls of the Play, but
its added horsepower ensures all titles run smoothly and Sony has
pre-installed Crash Bandicoot and Pinball Heroes to whet the appetite.
What’s more, the large screens of tablets makes them that much more
conducive to using onscreen controls – proportionately less screen space
is taken up by them. 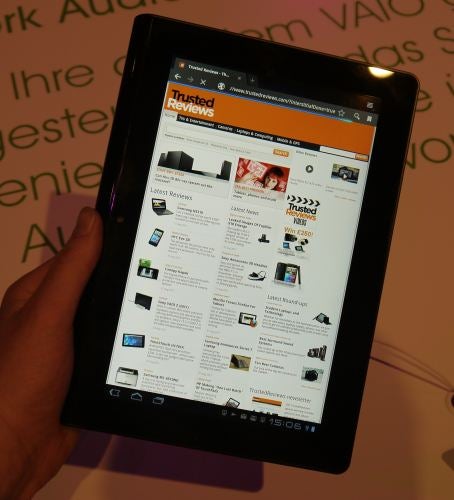 For camera enthusiasts Sony has called on
its camera prowess too and the 5MP shooter on the Tablet S is the best
we’ve experience on a tablet to date. In automatic the camera takes
pictures with greater vibrancy than the typically washed out images
we’ve seen from the
Samsung Galaxy Tab 10.1 and
RIM BlackBerry PlayBook while it obviously mops the floor with the
inadequate 0.7MP rear camera on the iPad 2. For more hands-on
photographers Sony has also provided a reasonable level of control with
dual macro and manual exposure options as well as an array of preset
scene modes. Of course, there’s still the issue of why you’d want a
particularly fancy camera on a tablet but at least the option’s there on
this one.

Sony
has done a good job with battery life too. Android is notoriously power
hungry and while the Tablet S’s claimed eight hours is less than the
Galaxy Tab 10.1’s nine we found it will last over six hours with heavy
usage, superior to the 10.1’s five hours . This still doesn’t hold up to
the iPad 2’s quoted 10 hours though (we found it lasts close to this
claim) and the Tablet S battery charge time of five hours is excessive.
Meanwhile pricing is on a par with its rivals (£399 16GB, £479 32GB,
£499 16GB 3G) offering reasonable value for money, at least technically.
However, there’s still that niggling feeling that any tablet rival
really needs to be undercutting the iPad if it’s to gain traction, as
Apple’s device simply offers the most complete tablet experience thanks
to its vast app support. Then again, if anyone can muscle their way into
this market, it’s Sony, with its trifecta of music, video and game
content to draw upon. 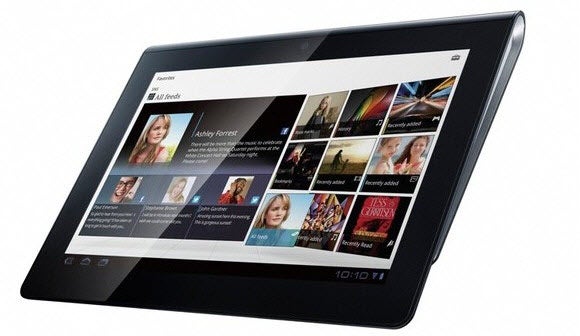 ”’Verdict”’
Sony
has taken its time to enter the tablet race and the Tablet S shows the
company has learnt from many of the mistakes made by its rivals and
worked hard to integrate worthwhile differentiators. This effort is
largely successful and while PlayStation conversions and Sony’s Music
and Video Unlimited services are only in their infancy these should bear
substantial fruit in time.

Certainly the Tablet S isn’t without
its faults. Connectivity options feel different largely for the sake of
it and Sony still can’t resist dipping into proprietary ports, but the
practical wedge styling should attract a loyal following – especially as
it carries no weight penalty. Some may take issue at the slightly
reduced screen size, but battery life possibly benefits from the choice
of a 9.4in display and the added pixel density makes it easy on the
eyes. For those who want a tablet which stands out from the pack the
Tablet S will prove a sound investment.