The DTR-T1010 is identical to the DTR-T1000 in terms of features and functionality, which brings both good news and bad. The bad news is that there’s still no built-in Wi-Fi – hugely disappointing for a product that relies so heavily on the internet.

The good news, however, is that the newer model shares the DTR-T1000’s impressive spec elsewhere. As before, the DTR-T1010 is available with a 500GB or 1TB hard-disk, the latter coming at a £30 premium. The 500GB version (the size our review sample was supplied in) holds 300 hours of standard definition TV or 125 hours of hi-def content. There are twin tuners on board, which is absolutely crucial if you want to watch one channel while recording another. The DTR-T1010 takes this one step further, allowing you to record two channels at once while watching or streaming a third.

The YouView service grants access to catch-up TV services from all of the terrestrial channels – BBC iPlayer, ITV Player, 4OD and Demand 5 – plus Sky’s Now TV and Milkshake for the kids. You can access them either through the EPG by scrolling back over the past seven days, or through the dedicated ‘on-demand’ section of the main menu (which has a lot of empty slots for future content providers). Services like these are found on many Smart TVs and home cinema products, but it’s rare to find them all in one place like this, which is what makes YouView such a compelling proposition.

Elsewhere Humax has launched a YouView app for iOS devices, which provides listings for TV channels and allows you to remotely record them on the set-top box when you’re out and about. Up to five mobile devices can be connected. 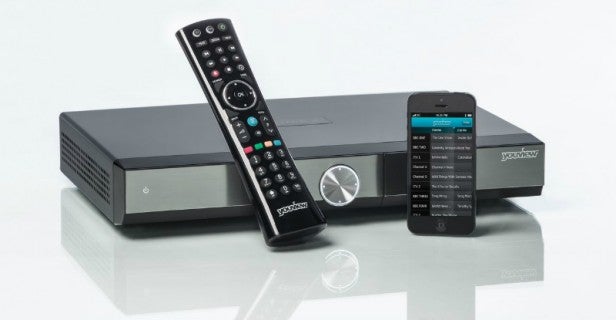 That’s about it on the features front. Sadly there are no media playback capabilities or network streaming like Humax’s Free Time (Freesat) box – this is a dedicated TV machine.

The DTR-T1010 isn’t really about flash features, it’s about simplicity and convenience. And thanks to its fantastic operating system it delivers both in spades.

From the word go it’s a remarkably user-friendly machine. Fire it up for the first time and you get a very helpful (and snazzily designed) setup wizard that gets you up and running by tuning the channels, checking for an internet connection and asking for your postcode, parental preferences and more. 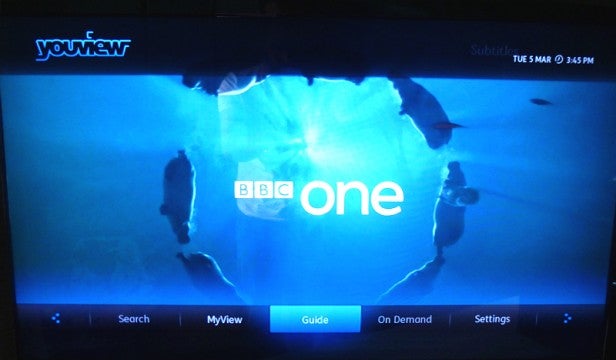 The onscreen menus are attractive without going overboard. The main menu slides in from the bottom of the screen and scrolls left and right. No superfluous icons or jazzy animations, just clear, simple text boxes. You can visit the EPG, On Demand section, setup menu and MyView, which is where you find all your recordings. There’s also a Search mode which lets you look for programmes on all the available on-demand services – very useful.

The most important display is the EPG, which is remarkably easy to use, even with the added complication of catch-up TV. It uses the classic timeline layout, with a row at the top showing you which day you’re looking at – you can skip days using the ‘>’ buttons.

The programme grid below shows six channels at a time, with the name of individual shows clearly displayed inside each large ‘block’. Any content from the past seven days that’s available to stream has a ‘play’ logo next to it – simply hit OK and it’ll whisk you to the relevant service. Each content provider has its own layout – some with adverts, some without – which makes for an inconsistent user experience, but until all the broadcasters get together and unify the design that’s something we’ll just have to put up with. 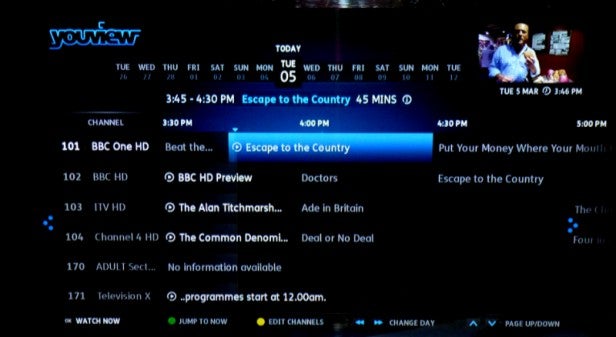 For the current day and the forthcoming week, you can browse and schedule recordings as you would on a regular PVR. There’s no live TV screen as you browse, but that aside it’s a brilliant EPG.

The Humax also boasts all the usual PVR tricks like Series Link, clash alerts, reminders and playback of a show while it’s still recording. Clearly written dialogue boxes guide you through every function, which will be music to technophobic ears.

Elsewhere the On Demand, MyView and setup menus are attractive and intuitive to use, using thumbnails and an engaging yet classy colour palette. We like the fact that when browsing most of the menus live TV plays in a box in the corner of the screen.

Equally impressive is the programme info banner, which presents details in a thorough and eye-catching way – there’s a synopsis, a still image from the show and a menu on the left that allows you to play the show on demand, watch it live or record it. The More Episodes option lets you scan the EPG and on-demand services for forthcoming shows. The only downer is that you can’t use the banner to search other channels – it only deals with the programme being shown.

Everything is controlled using a superb remote, which boasts a curvy gloss black design that looks great on the coffee table and large foolproof buttons. The layout isn’t cluttered at all and the buttons are clearly labelled – important keys like menu controls and the blue YouView button are given due prominence. Great stuff.