Huawei launched its first truly high-end Android phone at CES 2012. It’s the Ascend P1 S, and claims to be the world’s thinnest smartphone.

Slim is in, and has been for some time. However, it can come at the expense of ergonomics and comfort. Handling the Huawei P1 S, we found that it doesn’t suffer at the hands of its slimness obsession. Its curved edges give the handset a less severe feel than the Motorola Droid Razr, whose angles were a little intense for our liking. 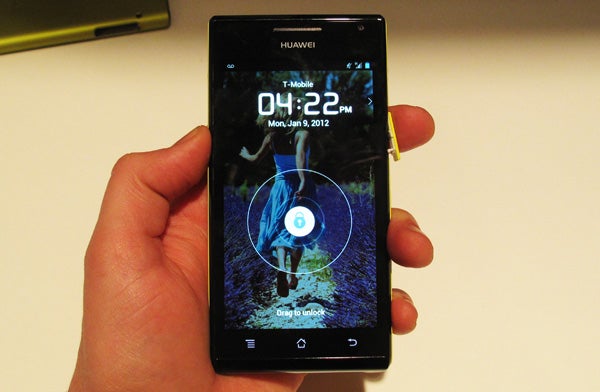 At its slimmest point, the Huawei P1 S is 6.68mm thick, but – as usual with these painfully slim phones – a couple of points along its frame bloom out beyond this measurement. The bottom of the back and camera lens housing are a couple of millimetres chunkier, but the former in particular helps the phone to feel comfy in-hand. The backplate is plastic rather than metal, but like Samsung’s top-end phones it nevertheless conjured a top-end, premium feel. We also got to check out the P1 S’s slightly thicker twin too, the P1, which is 7.69mm thick, but otherwise virtually identical.

Seemingly no connectivity sacrifices have been made to get down to this slim frame either. There’s a microSD slot on its side, covered-up with a plastic flap, and the microUSB data/charging socket is MHL-compliant and can effectively double-up as an HDMI video output. Expandable memory is a must here, though, because there’s just 4GB of internal memory – where phones like the Samsung Galaxy Nexus often offer 16GB or more. That said, we’d rather have less internal memory and a card slot than more internal memory and non-expandable storage, especially if it results in lower cost. 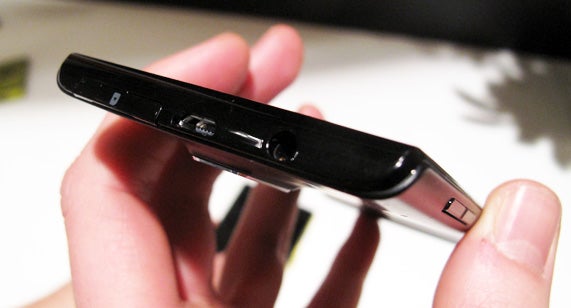 Another element that points towards a price lower than the very top dogs of the smartphone world is the screen. The Super AMOLED panel is bright, intensely colourful and wonderfully sharp, but the 960 x 540 pixel resolution is a step down from the 720p screens we’re starting to see in the latest Android phones. As such, it won’t quite offer iPhone 4S levels of sharpness, but with 256dpi pixel density, it’s crisp enough for all but the most pedantic of screen fiends.

Around the back, there’s an 8-megapixel camera supported by a dual-LED flash. We didn’t get to try this feature out during our time with the phone, but the software tweaks here are just as notable as its decent megapixel count. Huawei includes an HDR (high mode) and face detection, which aren’t included with Android phones as standard.

Huawei hadn’t added most of its software tweaks to the demo units we got to road test at CES 2012, though. The Ascend P1 S was running Android 4.0 Ice Cream Sandwich, the very latest version of Google’s OS, but didn’t have the custom elements that’ll ship with the phone at launch. These are largely based around widgets, similar to those of 2011’s Huawei Honor – which has not been released in the UK as yet.

However, we wish Huawei would just let the phone be. With the vanilla version of the OS, the Ascend P1 S was wonderfully quick, the dual-core 1.5GHz processor eliminating any sign of lag. We have a feeling Huawei’s custom UI elements may only serve to slow the phone down – its own-brand phones have tried to cram in bundles of 3D elements, which have looked ropey as well as acting as an unnecessary burden on the processor. We’ll find out whether the P1 S falls into the same trap in our full review. 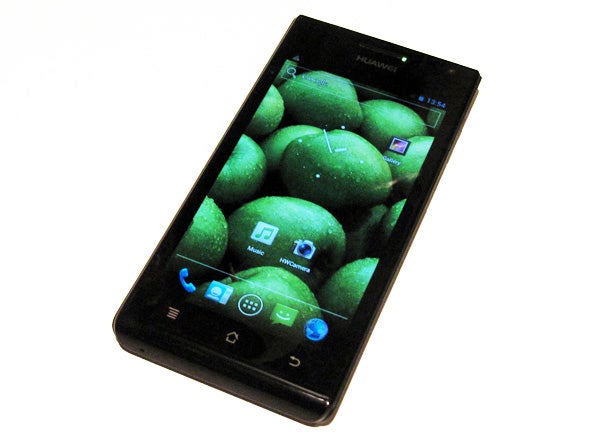 Aside from some potentially-dodgy UI tweaks and some wholly-welcome camera additions, the Huawei spokesperson didn’t suggest there would be many other significant custom elements. This suggests that the Huawei  Ascend P1 S won’t offer as generous video codec support as the Motorola Droid Razr or Samsung Galaxy S II. If you want to play an existing movie collection, it’s highly likely a third-party app or transcoding will be necessary.

While we have some reservations about the software of the Huawei P1 S, we have no such worries on the hardware front. Huawei has sought to make its first top-end flagship phone, and from our brief time with the phone, it appears to have succeeded almost entirely.  The slim bezel and 4.3in display avoid the sense that the phone will be simply too large for many, which we’ve found with some recent 4.6in handsets, and some older, less svelte 4.3in models.

The demo booths were littered with bright and patterned alternative backplates for the handset too, but we doubt whether these will take off in the UK – the rather lovely patterned graphite-style standard one already suits its position perfectly. But hey, maybe a high-end smartphone with a pink patterned back is just what the market needs.

The Huawei P1 S will be available from April 2012. We’ll be back with a full review soon.

The P1 S is what we hoped Huawei would come up with when we heard it was going out on its own, trying to become one of the big names in the smartphone game. It looks and feels better than any previous Huawei phone, and has the specs to make Android Ice Cream Sandwich fly. However, price may turn out to be a sticking point. No pricing details have been released yet, and Huawei needs to undercut Samsung and HTC if it’s going to grab the attention of smartphone buyers.