The HTC One XL is essentially a version of the HTC One X that that has had a bit of a redesign to let it take advantage of EE’s 4G network. Although outwardly very similar to the One X, internally it’s had a bit of a rejig. HTC hasn’t just slapped in a 4G radio, it’s actually also changed the processor the phone uses.

The HTC One XL is currently available from Everything Everywhere for £29.99 on monthly contract costing £46 a month over 24 months, which is the same price as EE is charging for Samsung Galaxy SIII LTE, so how does it stack up against Samsung’s 4G beast? 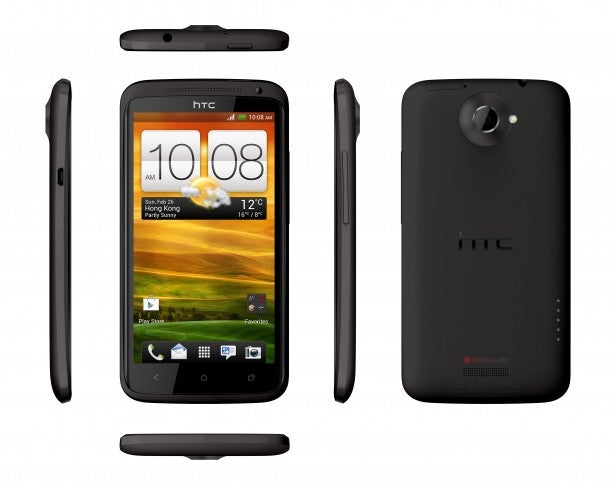 Thankfully, on the One XL HTC has dumped the shiny sliver strip that cheapened the look of the original One X. Instead the beading around the display is now black so it blends in perfectly with the rest of the screen. Some may find the dark grey finish a bit boring, but it certainly gives off a more professional air than a lot of Android phones we’ve seen recently. The HTC One XL is very slim too, measuring a mere 9.3mm deep, but despite this HTC has managed to avoid the plastiky feel that afflicts the SIII somewhat. When you pick up the One XL it just feels a bit more solid and sturdy to hold.

The layout of the buttons and ports is pretty traditional. The power button at the top is a bit of a stretch when you’re holding the phone single handed, but the volume rocker switch on the right hand edge is long and thin and easy to press. We also like the way the phone plays a series of ascending or descending notes as you turn the volume level up and down. The headphone jack is thankfully placed at the top, just where it should be in our opinion, while the microUSB port is on the left hand edge. This port is MHL compliant, so if you buy an optional adaptor you can use it to output video over HDMI. We tried it with a generic MHL adaptor and it had no problems smoothly playing back 1080p videos in MP4 format. 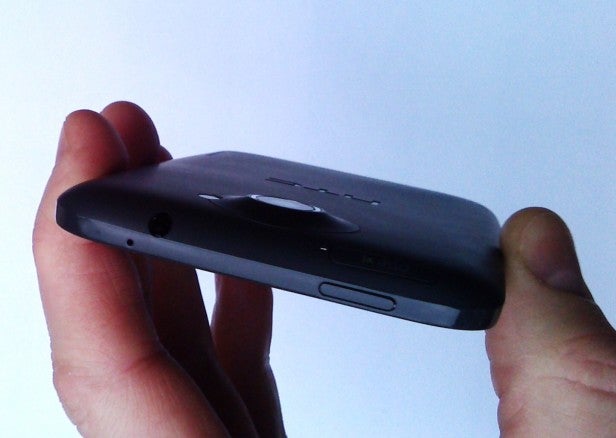 Beneath the screen you get the usual touch buttons for the back, home and multitasking functions. The only slight oddity is that on the top rear there’s an iPhone style pin slot to open the Sim card slot, which takes a microSim card.

On the rear you’ll also see a curious line of five metal dots towards the bottom of the phone. It turns out that these are contacts for charging and data transfer that are used by a series of peripherals that HTC offers, such as desktop and car docks.

The One XL has both front and rear facing cameras. The front camera is a pretty mundane 1.2megapixel affair, but as well as being useful for video calling, HTC has also added a mirror app, in case you need to fix your hair or apply some lippy on the train. 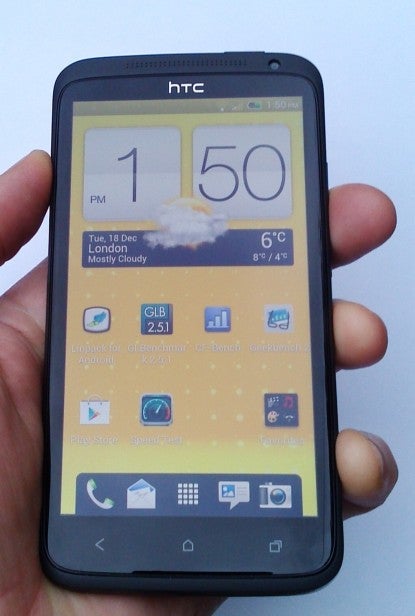 The rear facing camera is naturally where all the action is. It’s not the sensor’s 8Megapixel resolution that makes it special, but rather some of the extra features it offers. For example, you can take stills photos while shooting video and those stills are not just captures from the video stream, they’re actual full resolution shots.

It also has a rapid shooting mode where if you hold down the shutter button it’ll fire of around four shots per second. In conjunction with the rapid shooting mode there’s also a best shot feature. Once you’ve taken a series of shots you can scroll through them to select the best one and have the camera app automatically delete the rest.

HTC has added a range of filters that have live previews so you can see exactly how your shots will look. These range from depth of field effects to vintage and sepia colour effects, all of which are of a pretty high standard. 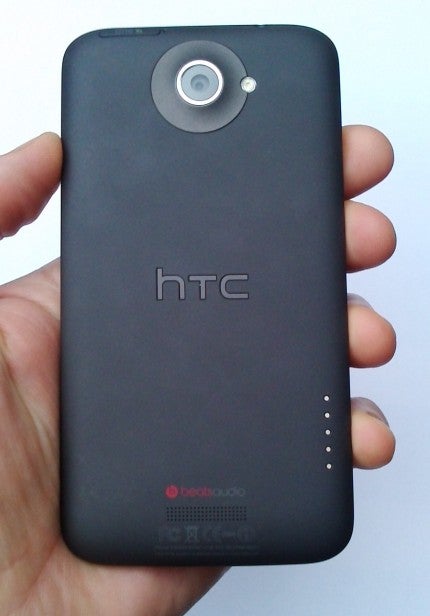 The quality of shots is on the whole very good, but they lack that little extra edge to put them up there with the very best. The camera has a slight tendency to wash out brighter parts of pictures and sometimes detail isn’t quite as sharp as it should be. The 1080p video shooting mode is pretty impressive, though, even if detail levels drop off a lot if there’s a good deal of fast movement in the frame.

Internally the HTC One XL is actually quite a different phone to the original One X. That’s because HTC has swapped out the Tegra 3 quad core processor found in the One X and replaced it with dual core Snapdragon S4, while also adding in a 4G radio. The change from a quad core to a dual core chip sounds like a pretty big downgrade, but it doesn’t tell the whole story, as the S4 is a newer generation chip and its cores perform faster than those in the Tegra 3 processor.  It certain doesn’t feel sluggish in use and its benchmark results bear out the fact that it’s a pretty muscular chip. 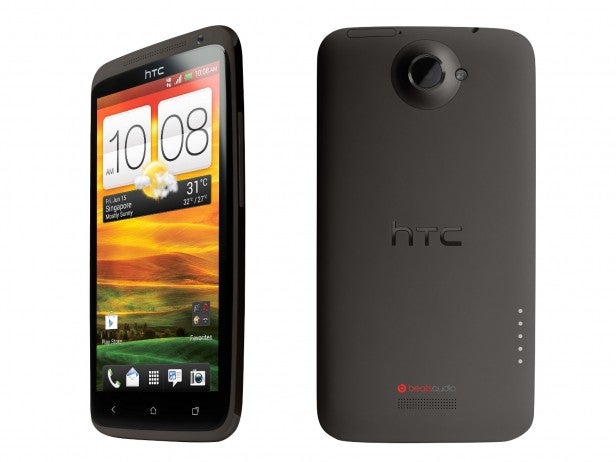 It had no problems reaching 50 fps in the GLBenchmark Egyptian Standard test and in Lin Pack it clocked 138.251MFlops. In Browser Mark V2 it posted a core of 1225, while it managed to complete Sunspider 1170.6ms. These are all pretty rapid results, but the fact remains that they’re slower than those of the SIII LTE: Samsung’s handset scored a higher 59fps in GL Benchmark and 1151.5ms in Sunspider (lower is better). Thje One XL is also bested by the SIII LTE in Geekbench 2 (1,758 v 1,536) and CF Bench (13,124 v 9,530). Of course, in real life you’re unlikely to notice the difference on a day to day basis, apart from perhaps when you’re playing really demanding 3D games. Nevertheless, if you want the fastest LTE handset around, the HTC One XL is not it.

Speaking of speed, we tested the handset on Everything Everywhere in East London near the Olympic Park. EE says that average speed on it’s network should be between 8 and 10Mbps, with bursts of up to 40Mbps. Previously we’ve never been able to get anywhere near those burst speeds, but EE seems to have updated its network recently as the HTC One XL hit over 35Mbps on download on a number of occasions in our speed tests. However, most results tended to vary between 16 and 22Mbps, which is still much, much faster than what we’d typically get in this location on 3G, and faster than many people’s home broadband connections. 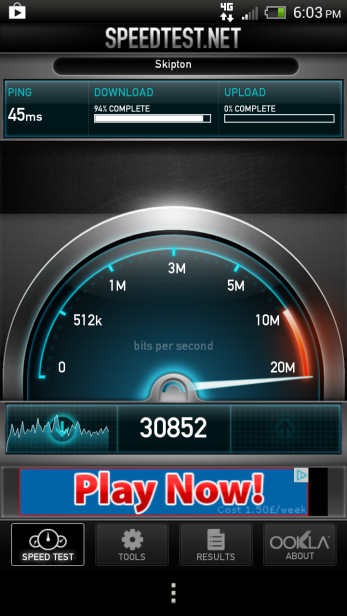 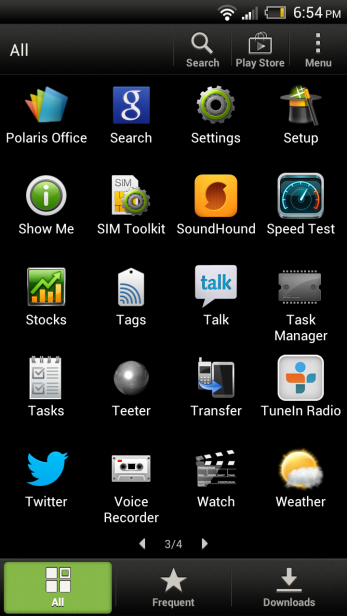 It is disappointing that the phone runs on Ice Cream Sandwich rather than the Jelly Bean version of Android that the SIII LTE ships with. Jelly Bean really is a vast improvement over Ice Cream Sandwich in terms of the slickness of the user interface as it doesn’t suffer from the random pauses and stutters that are still present in ICS. HTC has indicated that it plans to upgrade the One XL to Jelly Bean, but it’s given no firm date for when it will arrive.

Of course, HTC has done a lot of heavy customisation on the phone’s user interface, as its added its HTC Sense interface over the top. From the lock screen, for example, you can launch directly into the dialler, email, messaging or camera apps by dragging their shortcuts into the unlock circle that sits at the bottom of the screen. If you tap and hold on the homescreen it calls up a neat editor that show you thumbnails of each page of your homescreen at the top with widgets and shortcuts at the bottom. You can then simply drag widgets onto these thumbnails to quickly set up your phone exactly how you want. 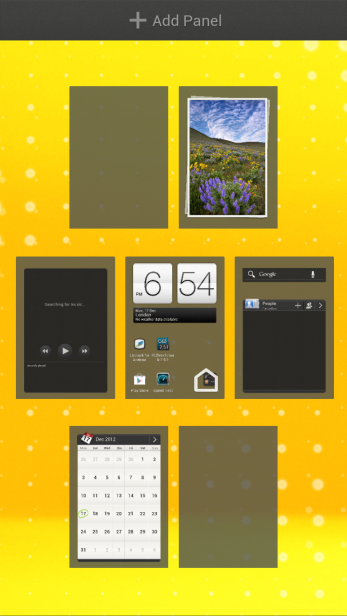 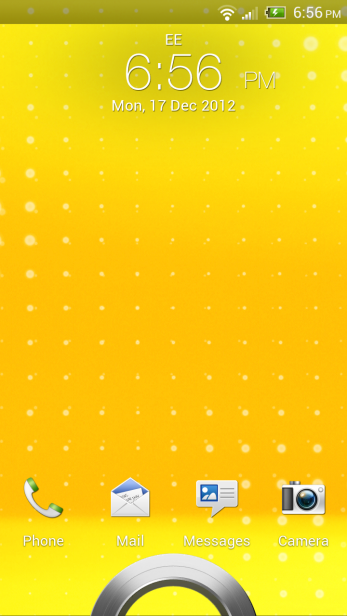 However there are a few annoyances, too. For example, when you swipe down the notifications tab you’ll find that there aren’t any quick switches for stuff like Wi-Fi, Bluetooth and Silent mode. Instead there’s just a link to the settings menu.

The HTC One XL’s screen is excellent. The 4.8inch display is very roomy, but it’s also got a high resolution of 720×1280 pixels. It uses traditional TFT rather than the AMLOLED technology of the Samsung S3 which means black levels aren’t quite as deep as what you get on the S3, but they’ll still very impressive and to our eyes the colours on the HTC One XL’s screen are more natural and accurate looking. 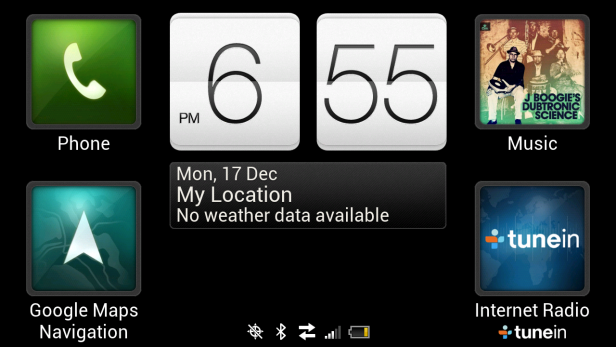 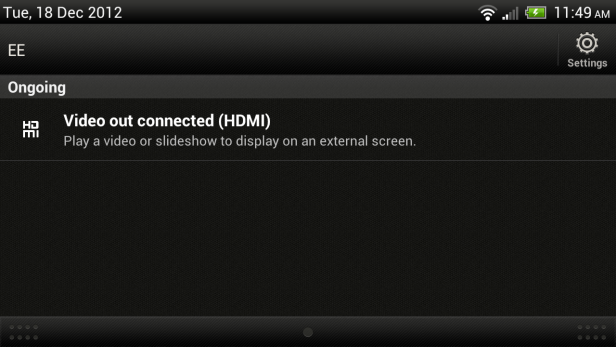 Call quality was excellent throughout our time with the phone, but sadly we can’t say the same about battery life. The One XL really struggles to get through a day without needing to be topped up with juice, in fact with heavy usage of 4G you may find you actually need to charge it at mid-day. All of the current generation of 4G handset are poor when it comes to battery life, but the One XL’s lack of a removable battery makes his more troublesome and worrisome than some other phones.

The HTC One XL is on the whole a very good phone. It’s got a top notch screen, speedy performance and that all important support for 4G. However, the fact of the matter is that Samsung’s S3 LTE is a slightly faster performer, has a better camera and comes loaded with the latest version of Android. Given that it’s available for the same price as the HTC One XL, it’s difficult to see why you’d choose this phone instead.

Read our review on the latest HTC One 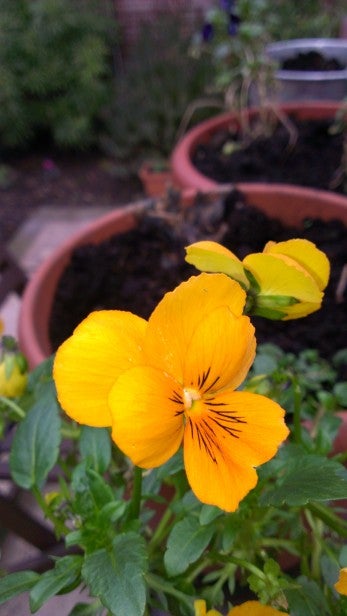 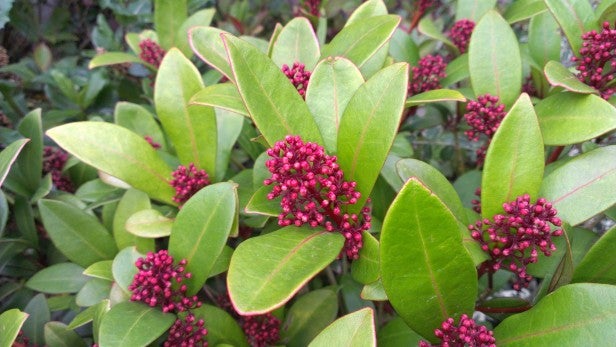 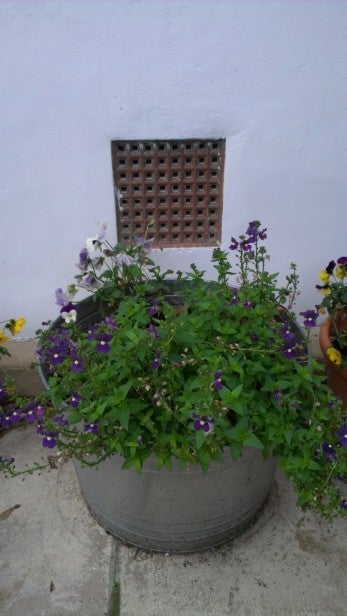 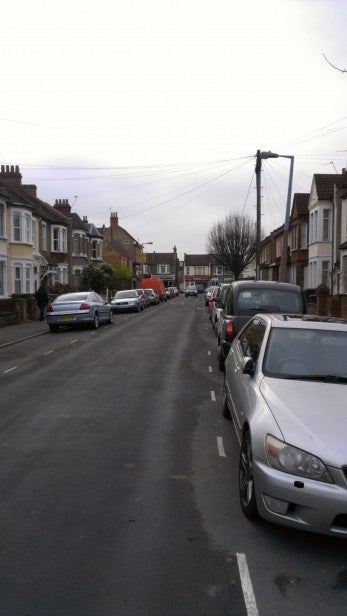 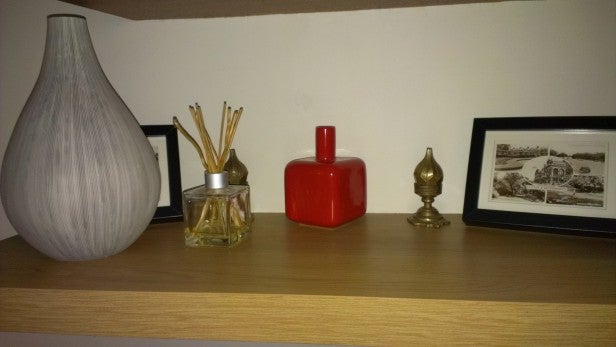