HTC’s star has been on the wane for a while, but to be honest it’s sort
of difficult to see why. Certainly the drop in its sales isn’t down to
it suddenly producing naff phones. In fact, the company is still
churning out some cracking handsets. We loved the HTC One X when we reviewed
it back in April 2012, with only its limited 16GB of storage really leaving us wanting, but after
the Samsung Galaxy S3 launched, the One X rather unfairly found itself shut
out of the lime light. Realising that all the One X needed to get competitive again was a small tweak, the company has returned with this
tuned up version – the One X .  Thankfully the results are rather good.

The
original handset was no slouch in terms of its specification – after
all it was one of the first quad core phones to reach the market – but
this new version ups the ante, as it uses an even faster quad core chip
that’s clocked at 1.7Ghz, compared to the older model’s 1.5Ghz. It’s
also got a massive 64GB of storage space built in (or 32GB on the
cheaper model), a larger battery and it comes preloaded with the latest Jelly Bean (4.1)
version of Android. 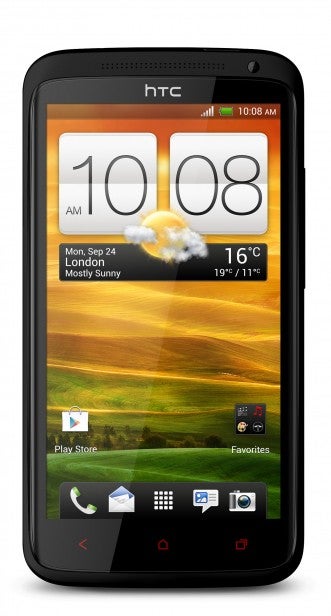 Externally little has changed from the
previous model, but seeing as the original’s design was bang on the
money – assuming you like a large handset – we’ve got no complaints about this. The chassis feels a bit more
robust and less plasticky than the Samsung Galaxy S3, for example, while the
soft-touch rubberised finish on the rear aids grip and comfort. None of these large screen Android devices are that easy to
use single handed simply due to their extreme width and height, but the
One X is no worse than the competition in this regard. 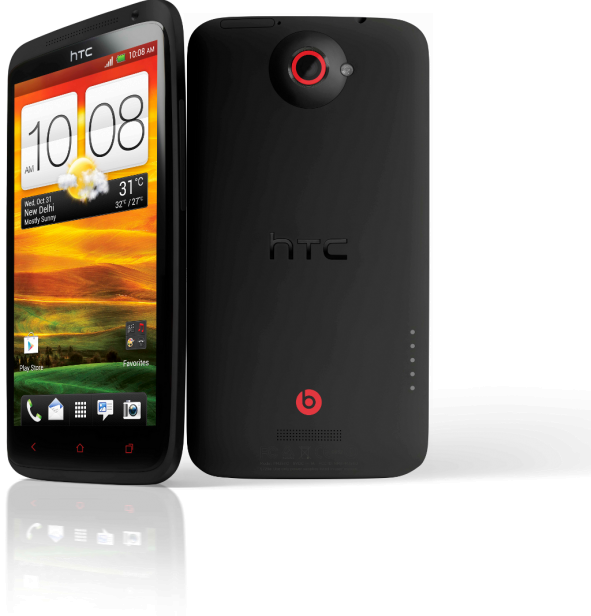 The only concession to the previous point is that, like
its predecessor, the power/screen unlock button is on the top edge rather than the side, making it even more difficult to reach without shuffling the phone around. Then again few phones have quite got this right yet with only the Sony Xperia T and Nokia Lumia 920 living up to our expectations.

Also on the top edge is the headphone jack while the volume rocker button is on the right edge
and the microUSB port on the right. The latter supports MHL, so you can
use it as an HDMI output if you buy an MHL adaptor (£5-£10). The phone’s micro SIM
slot sits at the top and you need to push in either the included tool or a paperclip to release it, much
like the set-up on the iPhone. The case is completely sealed, so there’s
no removable battery and, as mentioned, the phone also lacks a microSD card. However,
with 64GB of storage onboard, it’s probably not needed.

The only
real change from the older model is that the standard Android buttons
sitting beneath the screen for back, home and multitasking functions are
now coloured red, rather than white. They’re still backlit, so they’re
easy to use in the dark. We’re growing acustomed to the new Android style of using buttons incoporated into the touchscreen – leaving less wasted space below the screen – but we still found the One X easy to get on with. 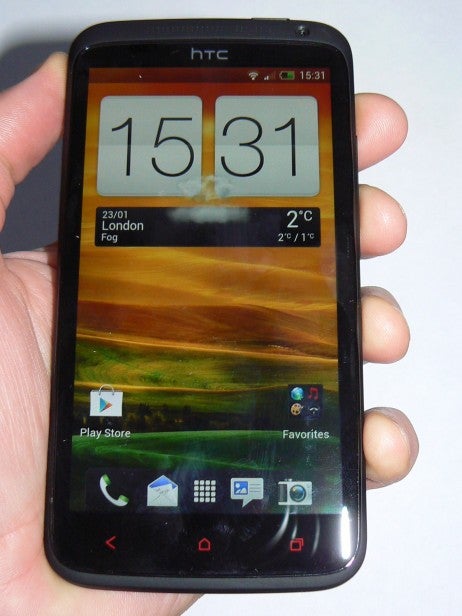 The
screen on the One X is absolutely top notch. It’s very large, measuring
4.7inches across the diagonal, but crucially it’s also got a high pixel
count thanks to its resolution of 720×1280 pixels, giving it a pixel
density of 312ppi.  It uses a Super LCD2 panel, rather than the AMOLED
technology that Samsung uses on the Galaxy S3, but while its black
levels aren’t quite as deep as that display, its colours are arguably
more natural and accurate looking. It’s also covered in Gorilla Glass 2,
so it should prove pretty tough over the life of the phone.

The HTC One X+ improves on its predecessor when it comes to raw
processing power by using an upgraded 1.7Ghz quad core chip. As mentioned, it’s also
available with either 32GB or 64GB of internal storage space (we had the
64GB version) though there’s only 1GB of RAM where some phones now how 2GB – this isn’t really a limitation yet, though.

This all helps to make it one of the fastest
phones on the market at the moment. In the floating point number test, Linpack, it returned a score of
161.558Mflops compared to the 138Mflops of the One XL while the web browser-based benchmark, Sunspider, returned a time of 1001.6ms (lower is better) compared to 1956 for the Galaxy S3.

Meanwhile on the 3D graphics (i.e. gaming) front in the
GLBenchmark Egyptian Classic test it managed to reach 53 fps, while the
One XL topped out at 50fps. It was outperformed by Samsung’s S3
LTE in Geekbench with the S3 scoring 17658 compared to the One X ‘s
1533, but it bests the S3 LTE in CFBench by reaching 14429 compared to
the S3 LTE’s score of 13,124. 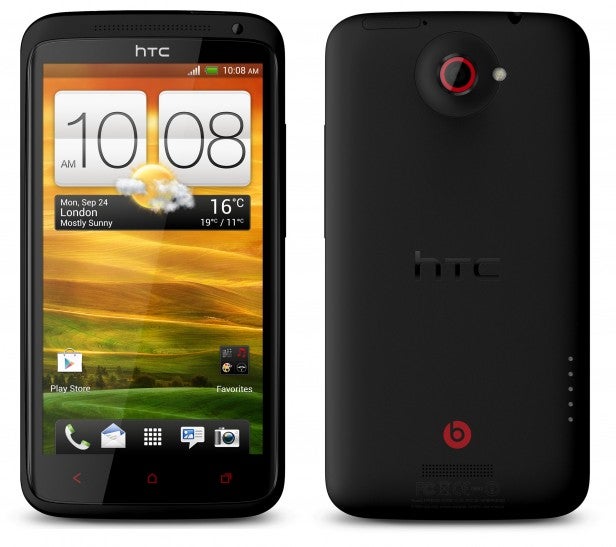 What
also helps the One X+ feel exceptionally fast to use is that it runs on
the latest Jelly Bean version of Android. Jelly Bean has had a number of
tweaks under the bonnet to make it much more responsive, finally
getting rid of the lagginess that plagued most previous versions of
Android.

As a result the One X really is a pleasure to use. Apps
open with incredible speed and it renders even complicated webpages in
the blink of an eye. The only real issue is that it can get quite warm,
especially when you use it for intensive 3D gaming.

HTC has
naturally also loaded the latest version of its Sense user interface on
the handset. This brings a number of tweaks, such as the ability to
launch apps from the lock screen by dragging their icons into the semi
circle that sits at the bottom of the screen. You’ve got seven different
homescreen to play with and if you hold your finger on a blank area on a
home screen an editing window pops up. This shows your homescreens as
thumbnail across the top with available widgets and shortcuts at the
bottom. You can drag widgets and shortcuts onto the homescreens to
quickly set up the phone as you want, which is quite neat. 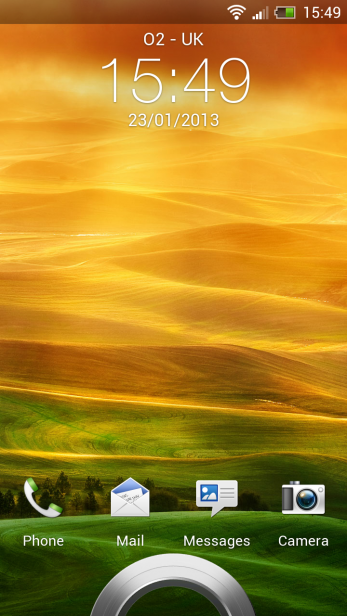 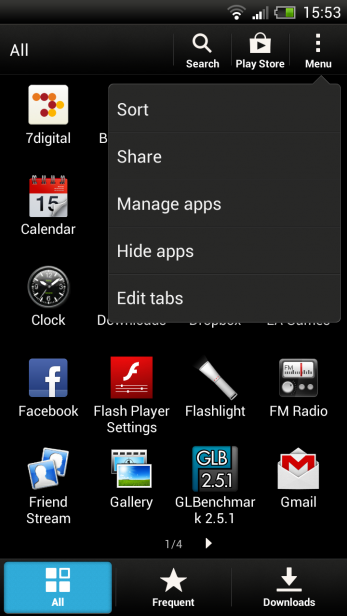 The
only annoyance is that the notification tab doesn’t include the quick
access buttons — for turning on and off stuff like Wi-Fi, Bluetooth and
GPS — that you get on most Android phones these days. Instead you’ve
got to tap a settings icons from within the tab to get to these.

The
phone’s camera is pretty impressive too. It’s got an 8Megapixel sensor,
but it’s the speed at which it’s able to fire off shots that help it
stand out. It’s also got a neat trick where you can take full resolution
stills even when it’s shooting video, with bot camera shutter and video record buttons always onscreen and at the ready – no need to change modes here. 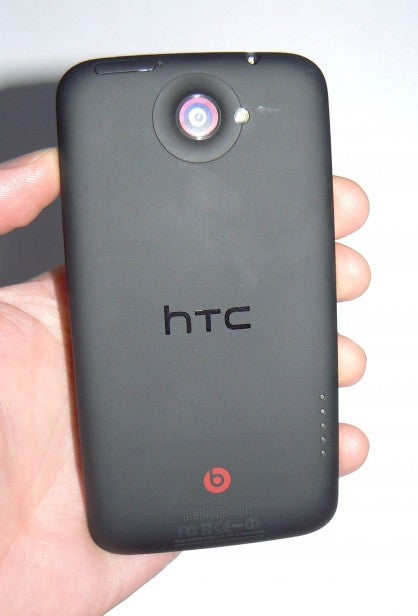 The camera app has a whole host of
varied shooting modes, as well as a number of real time filters for
stuff like vignette, vintage and posterise effects. The shots it
produces are very good, but we felt they weren’t quite on a par in terms
of sharpness and focus with what you get from the iPhone 5 and Galaxy
S3. 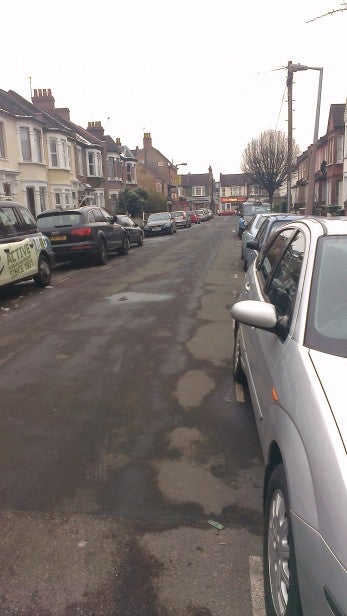 The
phone also has an improved front camera with a 1.6megapixel sensor.
However, you’re unlikely to notice the different as it’s most likely to
be used for stuff like video calling in Skype, where the resolution of
the cameras isn’t the limiting factor on image quality, but rather the
bandwidth available for the call. 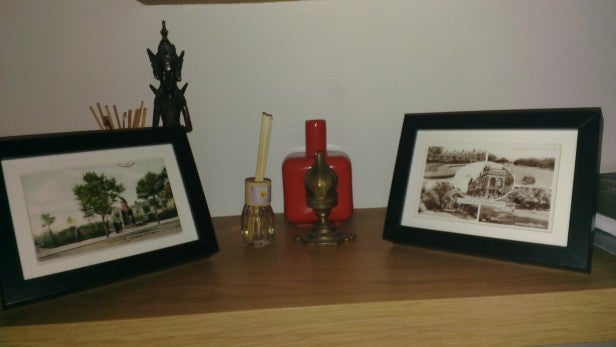 Thankfully HTC has upped the
battery capacity from 1800mAh on the older model to 2,100mAh on this
version. It’s still not a marathon runner in terms of battery life,
but we found we could get a day out of it quite easily with normal
usage. Call quality was first rate too, and it seems to hold on to
weaker signals pretty well.

The HTC One X+
really is a top class high-end Android phone. It looks great, has bags
of power and is rammed full of useful tweaks and features. If you’re
looking for a strong alternative to the Galaxy S3, then the One X+ is the
phone to go for.