What is the HTC Desire 12 Plus?

It’s been a few years since HTC has been wielding its affordable Desire brand, but here we are with a new budget contender in the HTC Desire 12 Plus.

This is a phone that clearly has the Moto G6 square in its sights. It has a £199 price tag (undercutting the G6 by £20), a smart design, a fancy-looking dual-camera setup, and similar internal specs.

While this is a tidy handset that gets many of the basics right, there are a few ways in which the HTC Desire 12 Plus falls short of its illustrious rival. It’s good, but good isn’t always enough in this uber-competitive part of the market.

For all its troubles, HTC has always been strong in the design department, and the HTC Desire 12 Plus is another good-looking piece of kit. Give it a cursory glance and you could well mistake it for a much more expensive handset.

Look a little closer, however, and you’ll see that isn’t glass on the back, nor is that chassis made of metal. It’s all varieties of plastic – barring the glass display, of course. 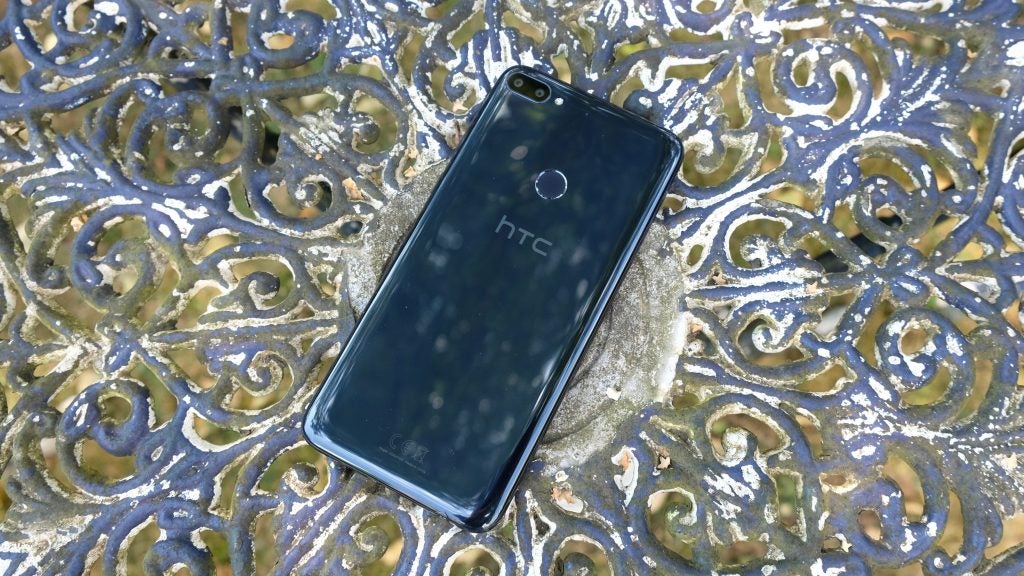 Still, the Desire 12 Plus feels decent in the hand. The back feels smooth, although it quickly gets smudgy and sweaty. More importantly, there’s virtually no flex to the phone unless you really apply some pressure.

The side buttons are well positioned and pleasantly clicky, and the phone’s power button has a pronounced texture that helps you distinguish it quickly by feel. It’s the kind of thoughtful little touch at which HTC often excels.

Also on the rear of the device is a fingerprint sensor, which is placed sensibly within easy reach of your forefinger. It’s of a good size and nicely recessed – so, again ,you can find it instinctively without any undue rummaging.

Fingerprint sensors have become table stakes even for affordable phones, but the HTC Desire 12 Plus example is both reliable and reasonably fast at getting you to the homescreen.

One glaring omission related to that component, however, is NFC. Without this accompanying piece of networking tech, you’re unable to use Google Pay for mobile payments.

Another notable downer is the provision of a micro-USB port to the right of the 3.5mm socket, rather than the more modern USB-C connection standard. 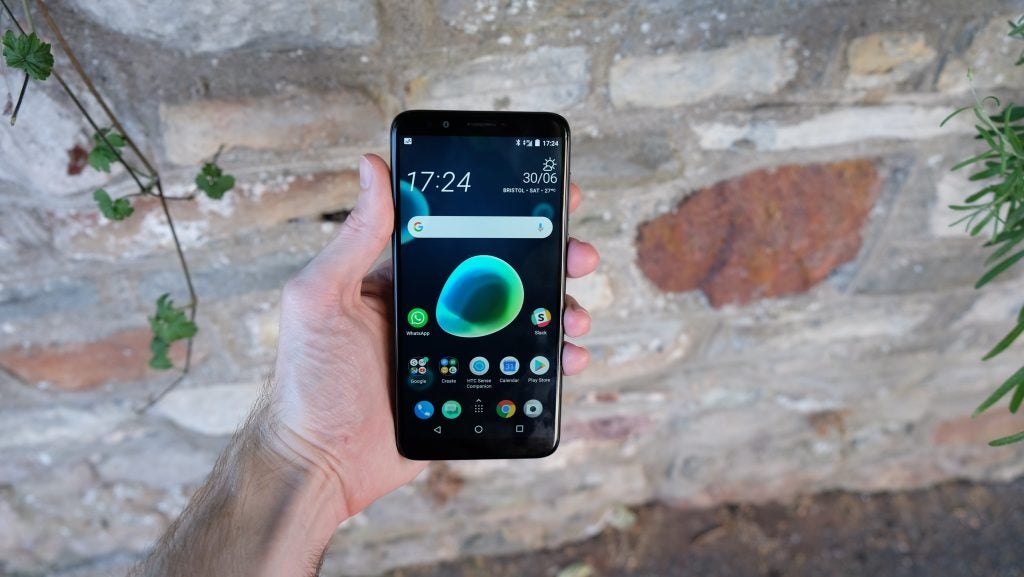 You might argue that neither of these two issues is particularly problematic for a lot of people and their specific-use cases. All we can say in response is that the Moto G6 has both of these provisions, and will happily welcome all those who would rather have them than not.

The HTC Desire 12 Plus provides a nice big canvas for media and web browsing via its 6-inch IPS LCD screen. It’s plenty bright enough, and its colours are pretty accurate for a low-end LCD.

You can always crank things to the warmer or cooler end of the colour scale with HTC’s Colour Temperature setting.

It also comes in the stretched-out 18:9 aspect ratio that’s fast becoming standard across the industry. This doesn’t mean a lot for watching video content right now, which is still largely shot in 16:9. But landscape-orientated games are fast adapting and benefiting from the extra width. Web browsing and other vertically scrolling apps also get a subtle boost.

There’s one considerable downer with the HTC Desire 12 Plus display though: the resolution. Given that it’s such a large display, 720 x 1440 (essentially extra-long 720p) doesn’t seem sufficient. Particularly not when the Moto G6 and Honor 9 Lite are offering 1080p Full HD+ screens at a similar price point. 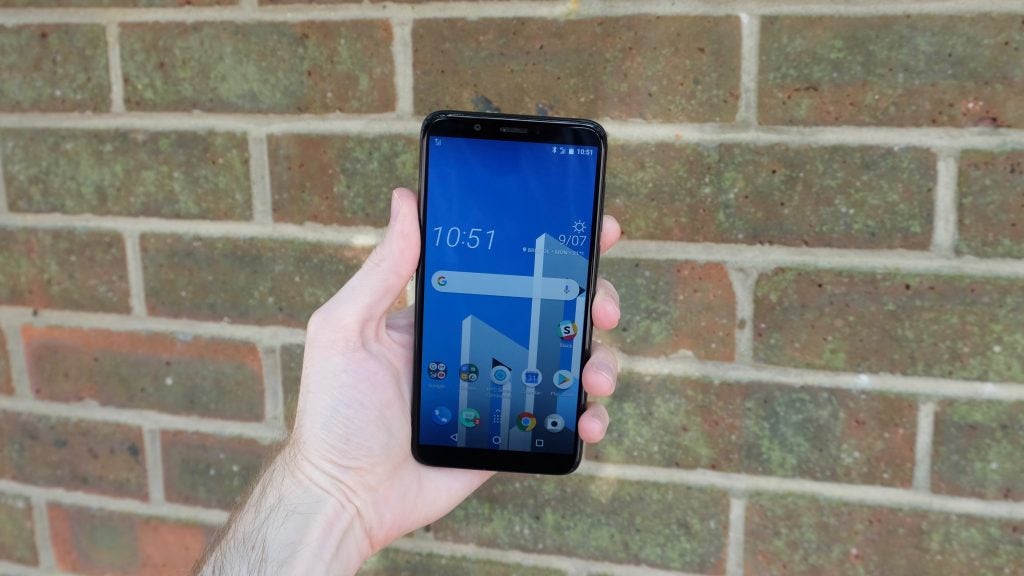 It isn’t that content looks bad or massively grainy on this phone, but you can definitely notice a certain softness when browsing the web or watching video content. At 268ppi, it just feels like the Desire 12 Plus isn’t making the most of all that extra space.

The most meaningful difference between the HTC Desire 12 Plus and the plain Desire 12 is performance. The Snapdragon 450 CPU that runs the Plus is a much better chip than the MediaTek 6739 that powers its little brother.

It also happens to be the same Qualcomm chip that you’ll find in the Moto G6, along with the same 3GB of RAM. I was reasonably impressed with the general performance in that phone, so it should be no surprise to find the same reaction here.

Day-to-day tasks such as unlocking the phone, flipping through your homescreens and switching between apps are all smoothly handled. Web browsing is as well, although it doesn’t load in content as quickly as a mid-range or flagship phone.

This is a competent performer when it comes to games, too. Guns of Boom runs pretty well, once you’ve given it a few seconds to load everyone in. It’s a well-optimised game anyway, but it can be downright unplayable on some budget phones. 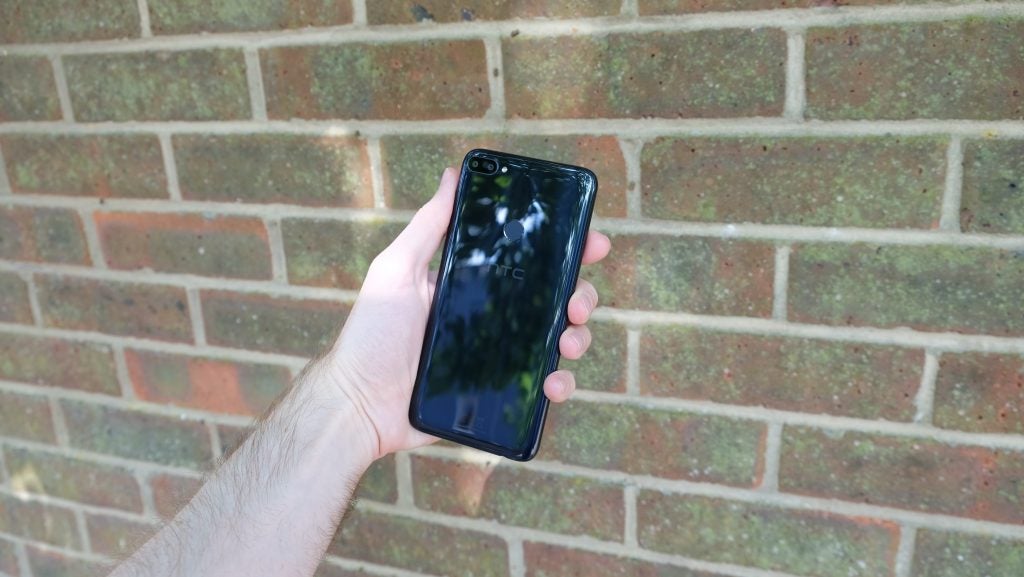 Elsewhere, Street Fighter IV’s one-on-one scraps moved fluidly, while PUBG ran through its Battle Royale gameplay without too much of a hitch, even though it defaults to Low settings.

It was a little surprising it fell short of the Motorola, given the similar specs and the HTC’s less demanding display. Perhaps HTC’s custom UI is weighing things down. Talking of which…

Android 8.0 Oreo has been on the market since July 2017, so its presence on the HTC Desire 12 Plus isn’t all that remarkable. Indeed, it isn’t even the very latest version (that would be Android 8.1).

I’m similarly ambivalent about the stuff that’s layered on top of that Android OS. HTC has traditionally supplied one of the more heavily modified Android UIs, and while the modern iteration of its Sense UI is relatively pared back, the modifications remain fairly extensive.

You still get an app tray, a brilliantly nuanced notification system, and access to a bunch of great Google apps out of the box. That much has been left functionally untouched, and it’s all presented with a little more style and cohesion than the likes of Huawei’s EMUI on the Honor 9 Lite.

But you also have to put up with the ugly and overly pushy BlinkFeed hub to the left of the homescreen. The banner notifications it sends your way are irritatingly brash, and the whole thing is just given way more prominence than it deserves – at least in its current state. 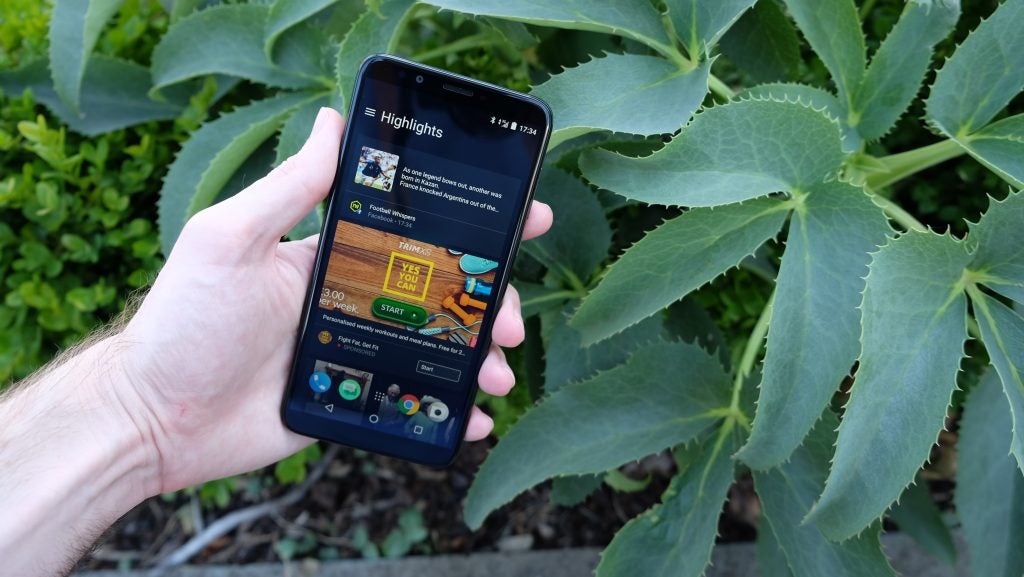 The HTC Sense Companion app, meanwhile, positions itself at the centre of your homescreen as a “personal companion,” but it isn’t an advanced personal assistant as is Google Assistant. It supplies advice based on your phone usage, such as letting you know if an app is running the background, or keeping you advised as to your daily steps. It will even tell you about local points of interest.

Again, it’s all a little pushy and irritating, and quickly found ourselves looking for ways to minimise its impact. Google Assistant is available with a press and hold of the virtual home button or the Google mic button, which only makes the inclusion of this Companion feel all the more pointless.

The software experience on the HTC Desire 12 Plus is smooth and intuitive enough, but it feels in need of a good overhaul – or, ideally, a roll back to something closer to stock Android.

HTC has gone with a dual-camera setup for the HTC Desire 12 Plus. It’s all the rage, even in budget phone circles.

Here that means a 13-megapixel main camera backed up by a 2-megapixel secondary unit, which serves to provide additional depth data.

This is applied in the phone’s Bokeh mode, which exaggerates the blurry background effect. It’s pretty effective, too, with such bokeh shots serving to make the subject pop.

It isn’t perfect, however, and you’ll notice weird smudgy artefacts where the algorithm has blurred out something you wanted to be in focus. That’s pretty common with all of these dual-camera systems, though. For the most part, HTC’s solution works well.

Then there’s UbiFocus, which takes five shots in quick succession, all at different focal lengths. You can then pop back in and change the area of focus once the image has been taken. Which is fine, but HTC seems to have hidden away its Gallery app, so you have to go through the camera to retrieve and edit such images.

Regular shots tend to come out quite well, with decent levels of detail and accurate colours. There are some familiar budget phone camera problems, though.

Focus is slow and a little flakey, low-light images are noisy, and large extremes in light and shade are poorly handled in regular Auto mode. There’s an HDR mode for the latter, which aggressively tackles the problem (sometimes overly so), although it isn’t particularly swift about its business. 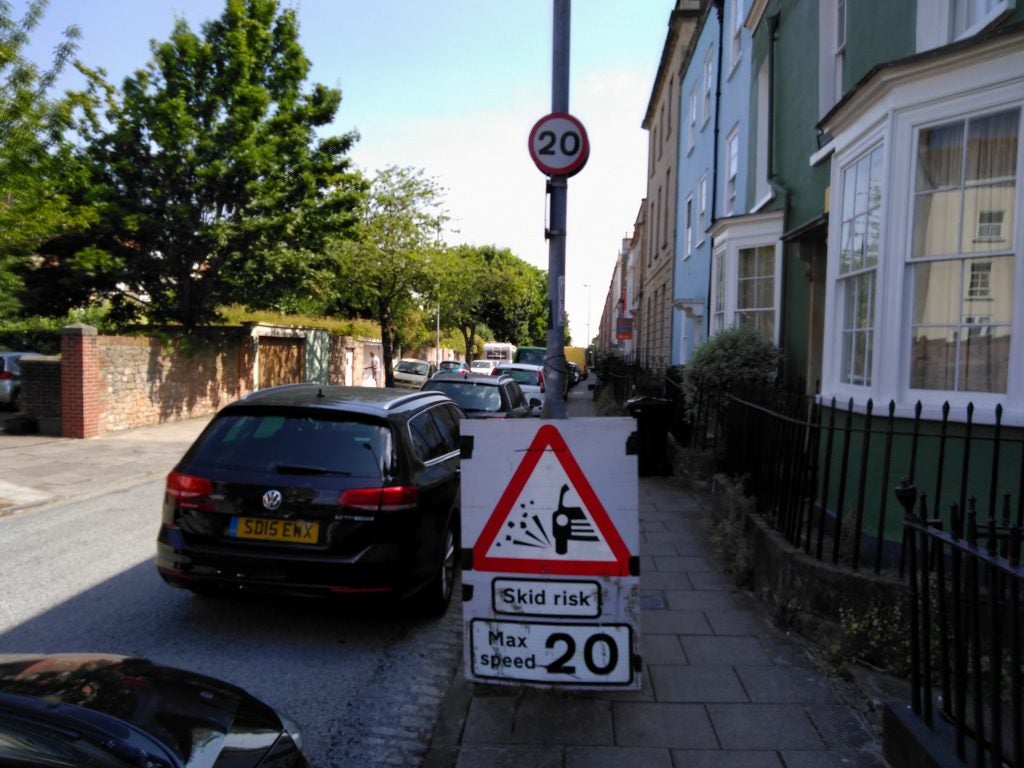 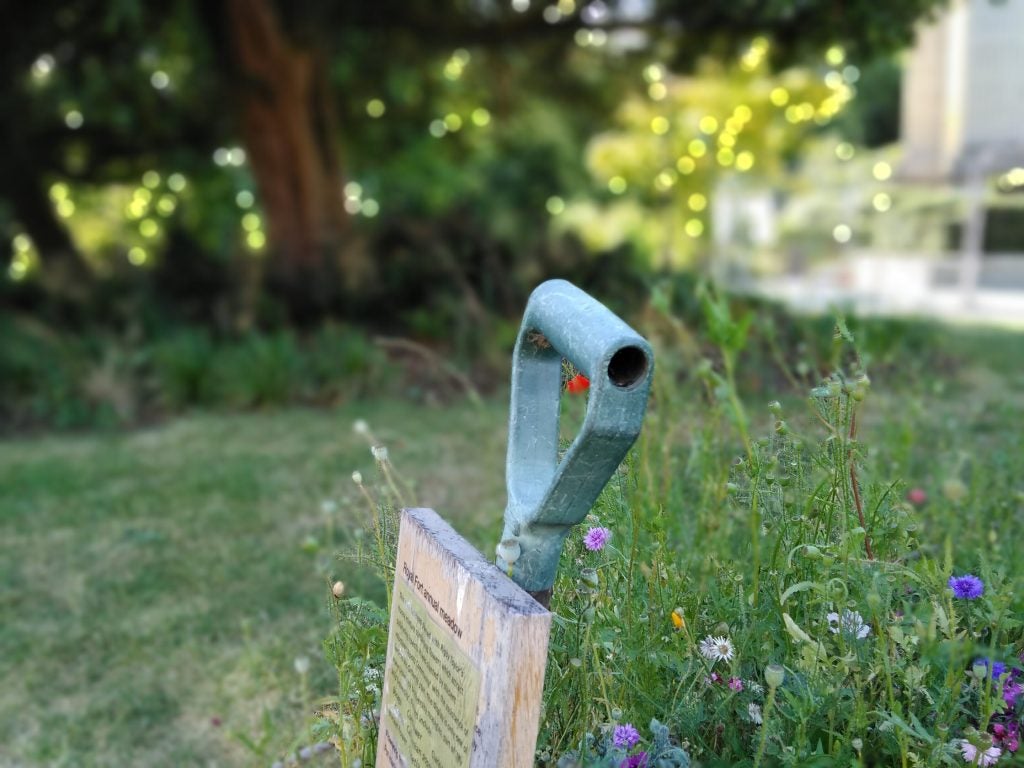 Bokeh mode effectively exaggerates the background blur, but does weird things with some of the foreground flowers 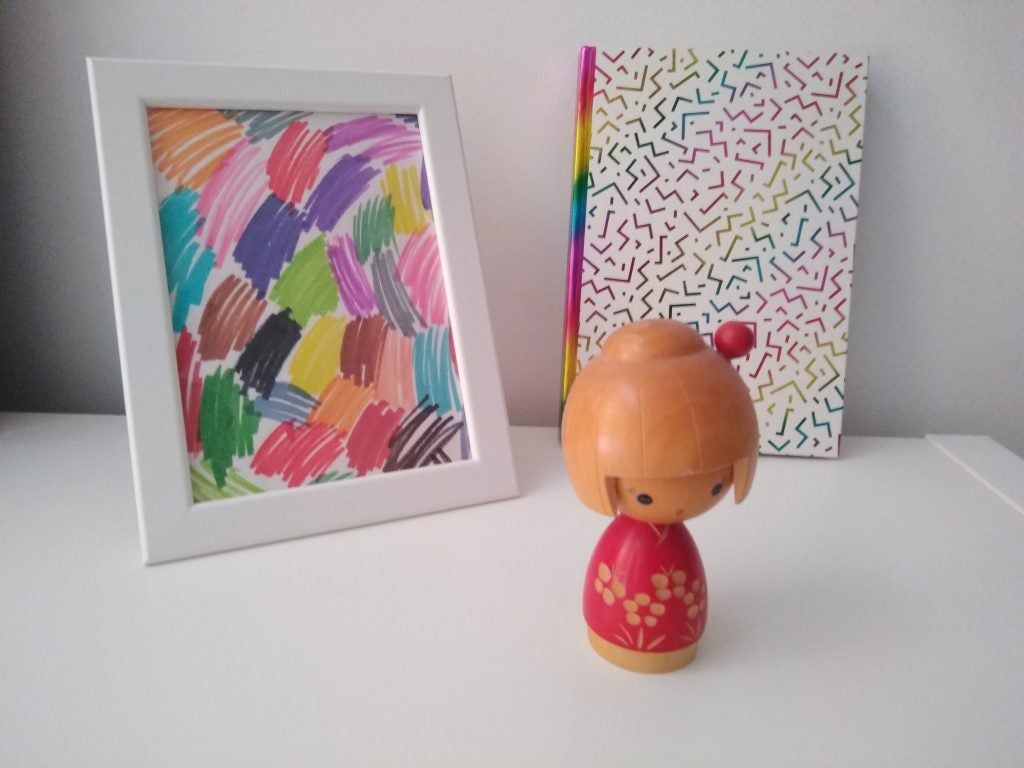 In low light, the Desire 12 Plus gets the colours okay, but there’s plenty of noise 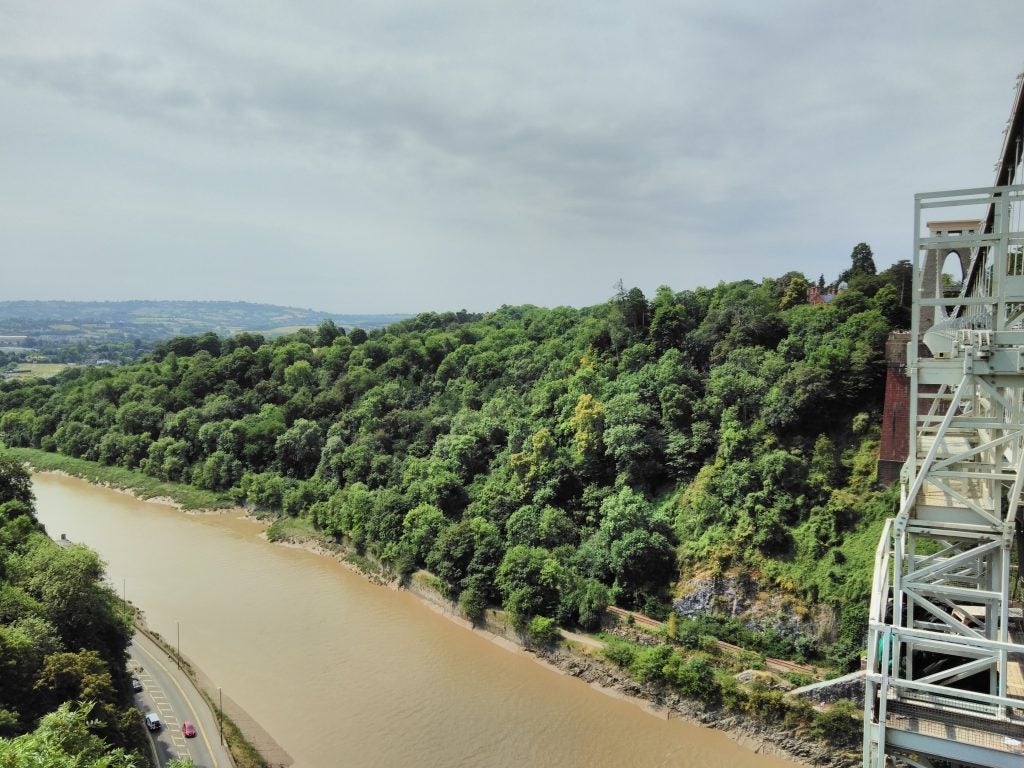 Turning on HDR brings the trees out much better With HDR off, this look into a ravine on a muggy day is rendered a little murky 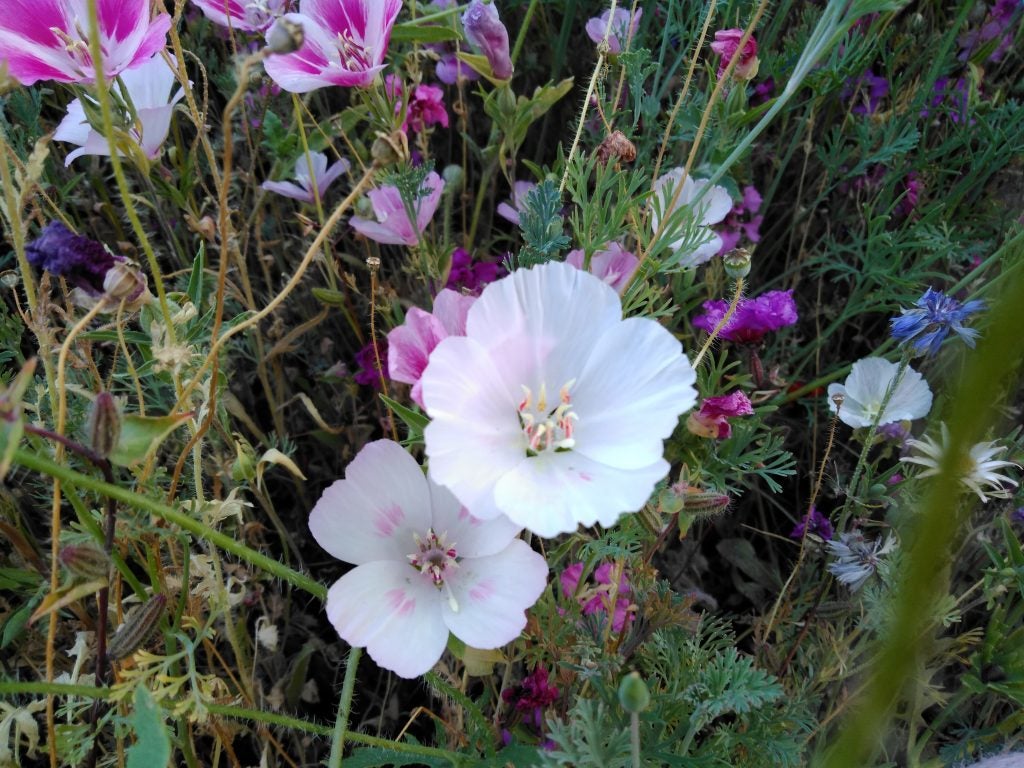 Nice colours and detail on these flowers, although the phone didn’t focus on the central flower we were looking at

The HTC Desire 12 Plus comes with a 2965mAh battery, which is plenty for a phone with these specs and capabilities. Yes, that 6-inch display is big and bright, but its sparse pixel count actually does the phone a favour in the stamina department.

Sure enough, it’s possible to get through a full day of moderate to heavy use quite comfortably. On much lighter and quieter days, it could even last through two full days.

It stood up to tougher tests rather well, too. Playing 15 minutes of Guns of Boom with the screen on half brightness consumed just 6% of the battery, which is the same as the Honor 9 Lite and a little better than the Alcatel 3V’s 7%.

After playing a downloaded 50-minute TV episode with the screen brightness cranked right up to full, the HTC Desire 12 Plus lost 14% of its remaining juice. That isn’t exactly brilliant, but it’s the same as the Honor 9 Lite and a little better than the Alcatel 3V (which lost 16%).

As mentioned already, there’s no fast charging function here, and that’s a bit of a shame. You might not expect such a feature in a £200 phone, but the Moto G6 has it – and that’s the device every similarly priced handset is going to have to be judged against for the next year at least.

Why buy the HTC Desire 12 Plus?

The HTC Desire 12 Plus is a smartly designed £200 smartphone that does most things competently. It has a big, bright 6-inch display, strong battery life and decent performance.

However, it falls short in a few notable areas. While its display is big, it isn’t as sharp as it could be. It also lacks features such as NFC for mobile payments and fast charging.

Sense UI isn’t the worst interface, but it still subtracts from the core Android 8.0 OS rather than adding to its appeal.

This remains a very pleasant phone to use, but the elephant in the room is the Moto G6. Motorola’s budget king doesn’t suffer from any of the aforementioned issues, whilst at least matching each of the HTC Desire 12 Plus’s key strengths.

The HTC Desire 12 Plus is a perfectly decent £200 smartphone, but its key rivals (particularly the Moto G6) manage to match or better it in almost every way.