People like convenience. It’s why laptops are eating away at the desktop market. It’s also why we’re seeing ever more all-in-one (AIO) PCs, which basically means the computer bits are integrated into a display to make for a simple and clutter-free computing experience.

Within that sector, HP’s Z1 entrant is something rather special. It’s a 27in affair that uses the same high-quality IPS screen with its awesome 2,560 x 1,440 resolution as Apple’s equivalent iMac, except it’s further tuned for colour accuracy. It offers all the connectivity you could want, including USB 3.0, Displayport, a subwoofer out and even FireWire. It’s also one of the few all-in-ones this large to offer height adjustment.

But not even any of that is what’s most special about the Z1. As the world’s first workstation AIO PC, it’s upgradeable to ridiculously good specs including Xeon processors and Nvidia Quadro graphics when you buy. And, even better, you can easily do many of these upgrades yourself using largely off-the-shelf components.

This negates one of the biggest disadvantages of AIOs generally: that you’re stuck with what you buy – if you’re lucky you can change the RAM and hard drive, but that’s it. The Z1 not only overcomes this limitation, but it does so in serious style. After folding the machine flat, you can pop it open by releasing two thumb catches, and swapping components is as easy as pie thanks to ingenious tool-free mounting – but more on that later. 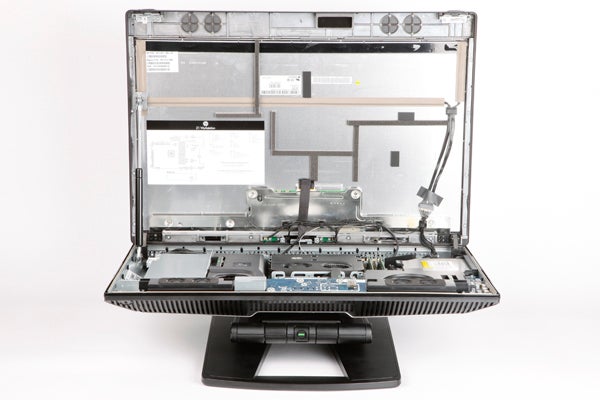 (centre)“Everyone who has seen how the HP Z1 opens up has exclaimed in awe. We’ve had people bringing their friends and colleagues to see it, it’s that impressive.”(/centre)

Design
The Z1 nicely merges corporate ‘chunky and edgy’ with some sleek, stylish touches such as its glass front panel and metal rear, to make for a very good-looking yet almost industrial 21.3kg machine. It’s the antithesis of the iMac, wearing its adjustable leg and abundant connectivity proudly on its metaphorical arm, and making no apologies for its lack of curvature. 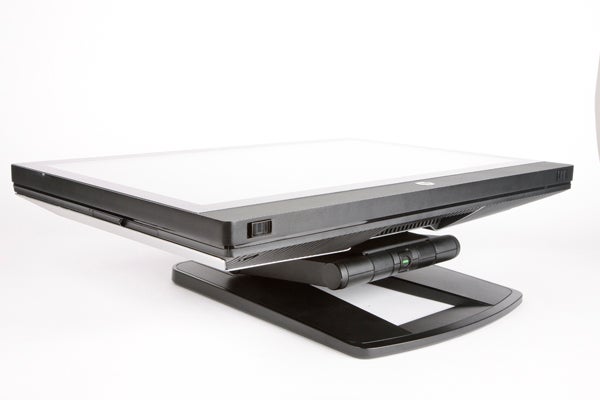 Build quality throughout is good, with only the merest hint of creak or flex around the wide air grilles at the top and bottom. Considering the extra effort and fragility involved in creating a design that you can open like a book, HP has done a superb job.

Adjustability
As already mentioned, one of the ways this all in one PC stands out from the crowd is in offering height adjustability. It can also fold completely flat, as it uses a Z-shaped double-hinged leg to give it this ability. This does make us regret the absence of a multi-touch screen, for even on a workstation you might want to have a game of two-player touch-enabled pong. 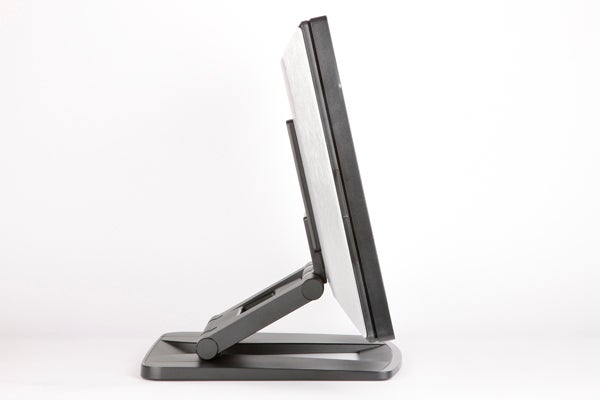 It must be said that adjusting the Z1’s height isn’t exactly the easiest thing to do, as it requires a firm hold and some effort with both hands. You can comfortably lift it to 9cm (more if you have four arms or can borrow some) and put it down to its base, which brings the chassis’ bottom to just under 2cm off your desk.

Connectivity
As you would hope from a workstation, connectivity on the HP Z1 is good. On the left side we have the power button and status LEDs, the slot-loading optical drive which can be upgraded to a Blu-ray writer, SDXC memory card reader, Firewire 800 port, twin USB 3.0s, and headphone plus microphone jacks. 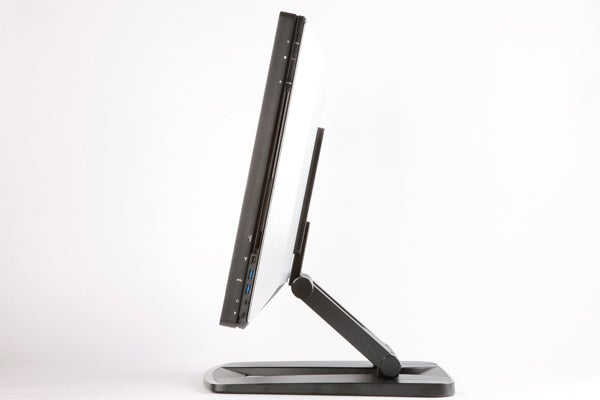 At the back there are a further three audio jacks for analogue surround, four USB 2.0 ports, a digital audio output, Gigabit Ethernet and Displayport in/out. Wireless is covered by Bluetooth 3.0 and of course Wi-Fi N. The only absentee on this extensive list that we would have liked to see is Thunderbolt, but then that’s only just making its way into enthusiast motherboards. 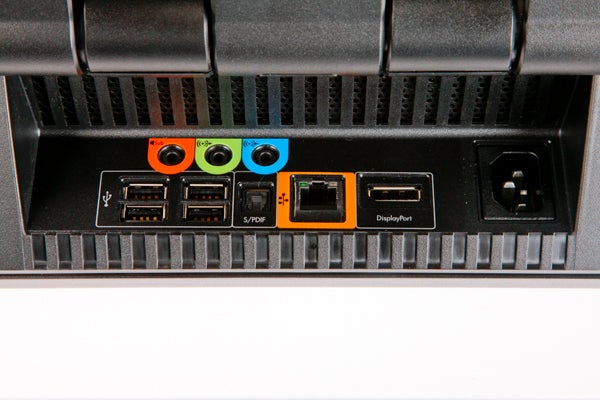 If we’re being particularly picky we kind of miss eSATA too. But really, our sole genuine complaint is that the rear connections are a major pain to get to. They’re awkwardly located behind the leg, making plugging in cables a genuine chore. This is the single element where HP has dropped the ball a little with the Z1’s design, though at least the most commonly used connectors are within easy reach.

Webcam
Not only does this business-oriented behemoth give you a Blu-ray drive option, but there’s even an integrated 1080p (Full HD) webcam, and it’s adjustable to boot. With a little scroll wheel at the HP Z1’s top, you can adjust its angle to your liking or turn it ‘blind’. There’s also a multi-microphone array to pick up your voice with finesse. Eat that, other all-in-ones (and yes, we’re aware last year’s HP TouchSmart 610 had the same feature). 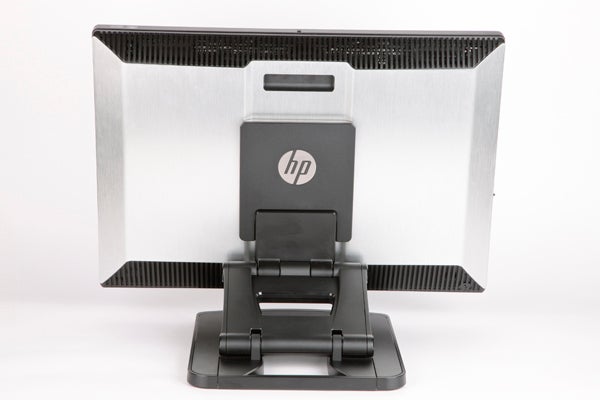 Screen
Thanks to its high-resolution 2,560 x 1,440, LED-backlit 27in IPS panel with excellent viewing angles, the HP Z1 is at the top of the all in one PC image quality game. Admittedly so far that’s no better than the 27in iMac and the newly announced Dell 27in AIO that uses Samsung’s PLS panel (as also found in the Samsung S27A850D monitor), but actually it rises above even these by using a 10-bit panel capable of 10.6 billion colours, with far higher out-of-the-box colour accuracy. 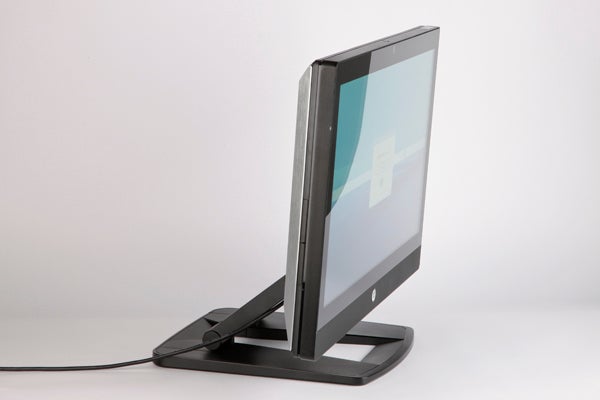 This makes the HP Z1 suitable as a graphics workstation or one where elements of visual design are involved. Of course, using its DisplayPort output you can hook up a dedicated monitor for colour-sensitive work, but unless you need to work in an extended colour space it’s not a requirement. This is yet another factor that goes a long way towards justifying the Z1’s high price.

Inevitably, the glass finish causes reflections, but it also aids colour saturation and black depth – not that either need a lot of help, as again the Z1 comes out swinging, and there’s only minimal backlight bleed to detract from what is an amazing experience for work or play. 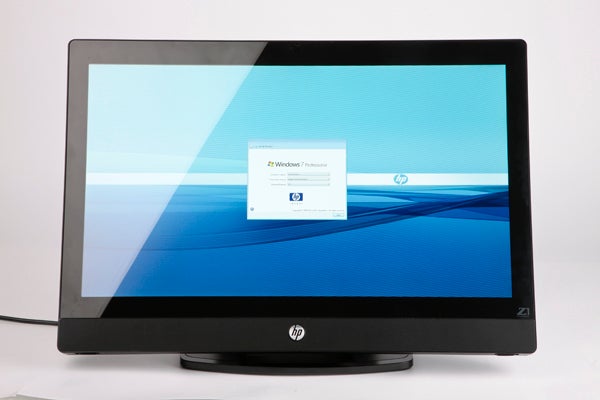 Speakers
The dual-cone front-facing speakers match up to the screen nicely by joining those on the 27in iMac as some of the best to be found on an all-in-one. They produce good clarity, depth and detail without skimping on bass, all at volume levels that can fill a small room – though a bit of distortion does creep in on maximum.

In other words, the HP Z1 is a great AIO PC for entertainment, especially when you add a sub-woofer through the dedicated output.

Specifications
In terms of specs the HP Z1 is, as mentioned, more flexible than most. The base configuration (around £1,700 including VAT) gives you a dual-core Intel Core i3-2120 like you might find on a budget desktop machine, with the next step up immediately being a workstation-level quad-core Xeon processor – which also hikes the price to £2,000. 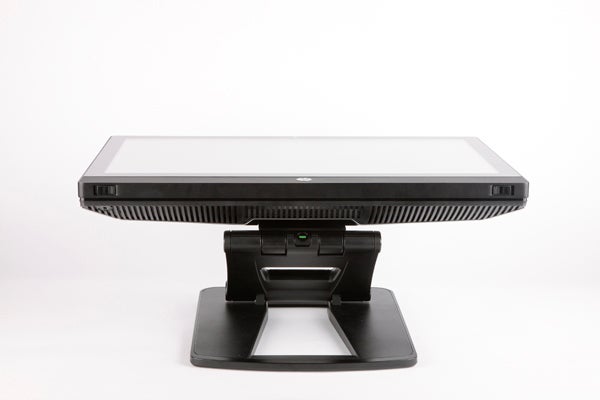 Of course, this machine being fully upgradeable, you can swap in a Core i5 or Core i7 yourself, but it’s a shame HP’s site doesn’t offer these options to begin with. Likewise, it’s even easier to upgrade the 2GB of RAM that comes as standard, since the Z1’s motherboard offers four DIMM slots for up to 32GB of DDR3.

Again, the base model offers a piddling 500GB hard drive, but the Z1 is available in configurations with up to 2TB from various third-party retailers, and you can swap in a 4TB model yourself. Unfortunately, while HP’s workstation has room and connectors for a single 3.5in hard drive or twin 2.5in models, it doesn’t let you combine a 3.5in hard drive with a boot SSD. 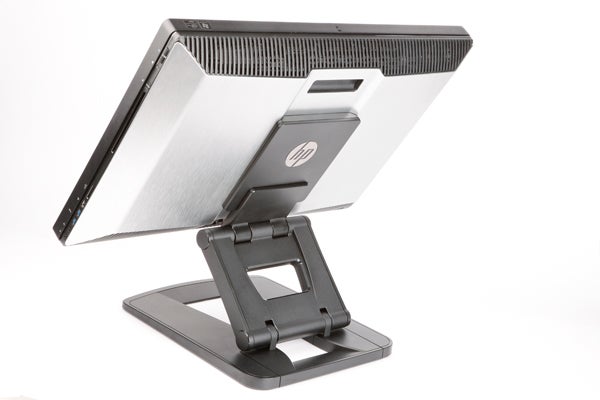 This is pretty much the only design flaw inside the chassis, as there’s enough room for a laptop-sized drive in addition to a ‘desktop’ one, but there’s simply no provision. Still, not only can you remedy this with a little tinkering (we would imagine this might void the generous three-year warranty though), but you can always go for a 1.5TB 2.5in for storage along with a boot SSD in whatever capacity you can afford.

As to graphics, on the Core i3 version you get Intel’s integrated HD 2000, which is a big no-no for intense 3D processing or of course gaming. If you go for dedicated, HP offers modules for anything from the Nvidia Quadro Q500M to the Q4000M. These are mobile graphics chips, but that aside this is the most graphics grunt you’ll get in any all-in-one, and the only one that offers professional graphics cards. 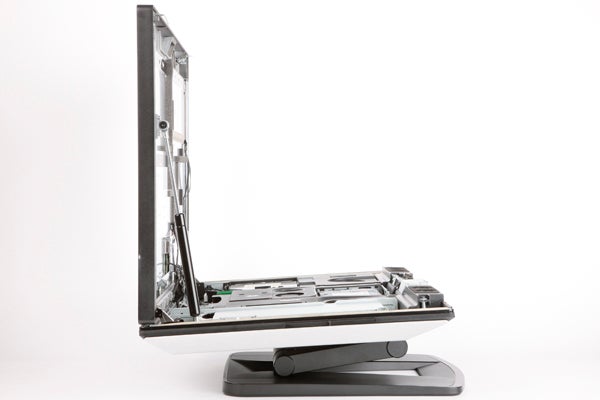 And because – like everything else – the graphics card is easily upgradeable, you won’t be stuck with older tech. So whether you’re a professional content creator or gamer with money to burn, the Z1 will have plenty of power. You’re only limited by the 400W, 90 percent efficient power supply, which again can be upgraded.

Upgrading
Everyone who has seen how the HP Z1 opens up has exclaimed in awe. We’ve had people bringing their friends and colleagues to see it, it’s that impressive. Once the AIO PC is in its flat/horizontal position, merely depress two sliders at the base, and the lid/screen lifts up smoothly, supported by a hydraulic mechanism. 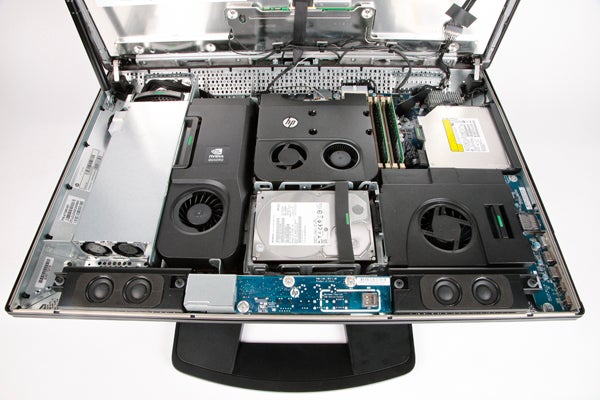 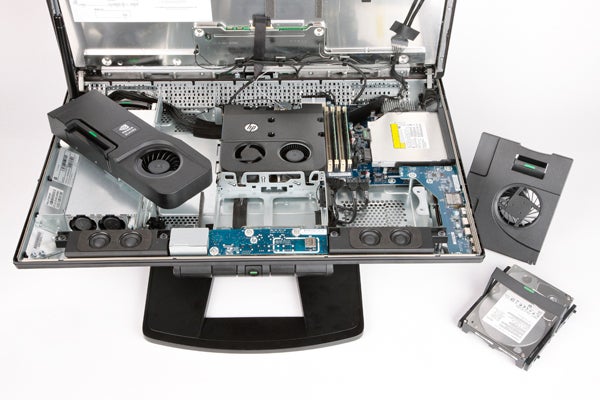 Inside, every single component is held in a modular bay, and nothing blocks anything else. It’s actually easier to upgrade the Z1 than any other PC we’ve ever reviewed – quite the feat for an AIO. Even the power supply can simply be slipped out by removing the cable clip and the holding clip, making it a two-minute job to install a new PSU!

Only the LGA 1155 processor will require a torq screw driver to undo the mounting system if you want to upgrade. The PSU and MXM mobile graphics module system will also require custom parts from HP, unless you’re a particularly confident and skilful tinkerer. 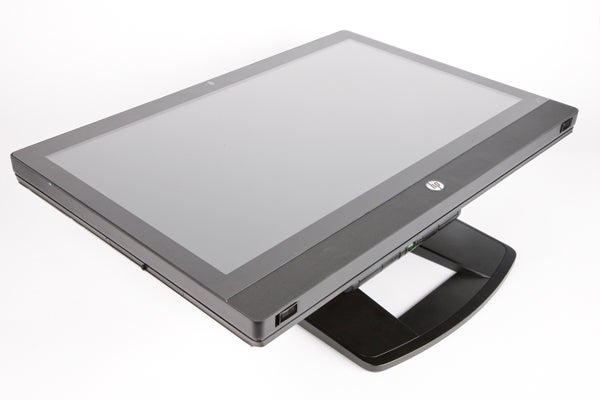 Closing the Z1 is even more fun than opening it, as a gentle push sends the lid smoothly down with a controlled hydraulic sound.

Value
Value is difficult to measure. As a pure all-in-one PC, the HP Z1 is more expensive than anything else, but justifies its price with its great connectivity, unmatched adjustability, superb upgradeability, and a class-leading semi-pro-grade screen. Still, the average consumer may be better off considering Apple’s or Dell’s alternatives. 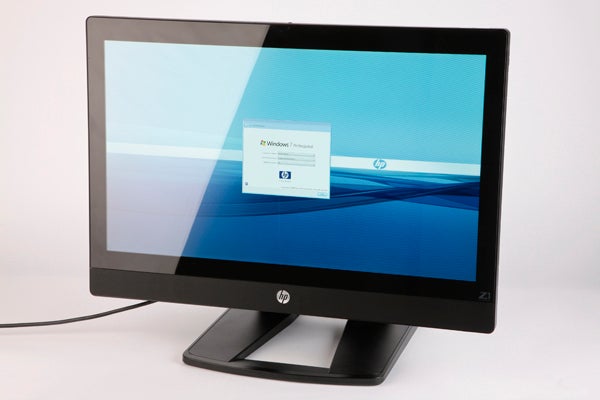 As a workstation, it simply has no rivals, as it’s the world’s first and only all-in-one to offer these kinds of components. As such, we reckon its £1700 starting price is actually decent value, though regarding more expensive configurations – well, that just depends on how confident you are upgrading bits yourself.

Verdict
The HP Z1 is a beauty of a 27in all-in-one PC. Not only is it meticulously built and the only one of its size and class to offer height adjustment, but it’s packed with connectivity and features like an adjustable 1080p webcam. It’s also the only AIO that’s fully upgradeable – in fact it’s easier to upgrade the Z1 than any other PC we’ve ever reviewed. All this is complemented by a gorgeous 27in, 10-bit, 2,560 x 1,440 IPS display and stunningly good speakers. Throw in its workstation certification, and it justifies its premium pricing.