The HP Sprout all-in-one PC, which was announced last year, is looking to shake up the way we use desktop computers at home and at work. It’s a PC at heart, with a 23-inch Full HD touchscreen and running Windows 8.1, upgradeable soon to Windows 10.

It’s not as sleek as an iMac and is certainly a bit heavier to manoeuvre, but there are plenty of ports and connections running down the side of the display and hidden around the back at the base, including two USB 3.0 ports, HDMI ports and an SD card slot.

Powering it is a fourth-generation Intel i7 processor and an Nvidia GeForce GT 745A, while there’s 1TB of internal storage and 8GB of solid state memory, which can be upgraded to 16GB. That’s all fairly typical as far as all-in-one Windows PCs go.

Where things get a little more interesting is the innovative touch mat, which sits in front of the screen and connects magnetically to a dock. This acts as a secondary, virtual touchscreen surface thanks to a DLP projector that sits above the main computer screen and projects the image onto the mat. It uses capacitive technology to offer a significantly different response to swiping across glass and offers 20-point multitouch to be able to interact more freely.

It also supports a full QWERTY virtual keyboard, which you can activate from the dock, although the Sprout does ship with a physical keyboard and a mouse if you want to go about things in a more traditional fashion.

The benefit of having dual touchscreens positioned this way is that you can have interfaces that either work independently of each other or extend a piece of software in a more comfortable way. One of the most interesting uses to illustrate this is moving piano keys to the mat and the sheet music to the main display to create a more natural experience of learning to play, as opposed to balancing an iPad on your lap. 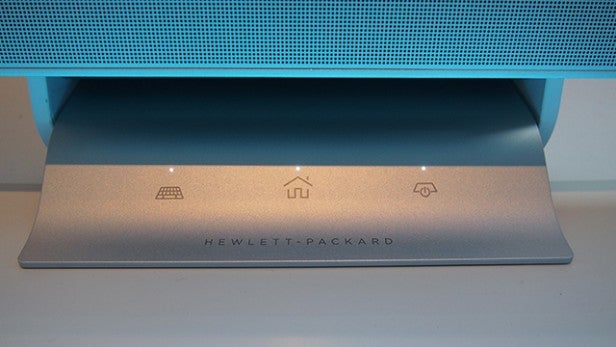 But there’s more the Sprout is capable of. Poking out from above the main computer display is the Sprout Illuminator. This adds an all-in-one scanner, depth sensor and camera along with the projector. The camera has a 14.6-megapixel sensor to take high-resolution scans of objects on the touch mat by pressing the camera icon on the main display. It takes 5 to 6 seconds to scan, saving a version on the desktop. You can then swipe scanned objects down from the main touchscreen to the mat, where you can move, enlarge and even select specific areas of the scan that you want to play with inside HP’s dedicated Sprout applications. 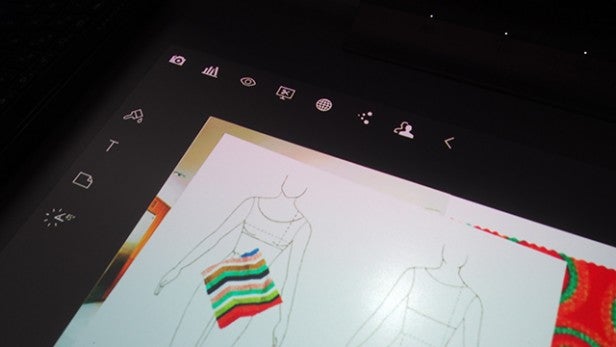 You can also add scanned 2D objects into applications like Powerpoint, Word and Adobe Photoshop, but that can only be done on the main computer screen. That’s because you can only use touch-opitmised Windows apps on the touch mat. HP says it’s in discussions with big partners to add the touch mat support and if one of those companies is Adobe, it could be a perfect fit for the Sprout.

The scanner also works with computer-typed text, so if you scan a page, it will save a version and let you edit the text in Word. Unsurprisingly, it doesn’t work with handwriting. 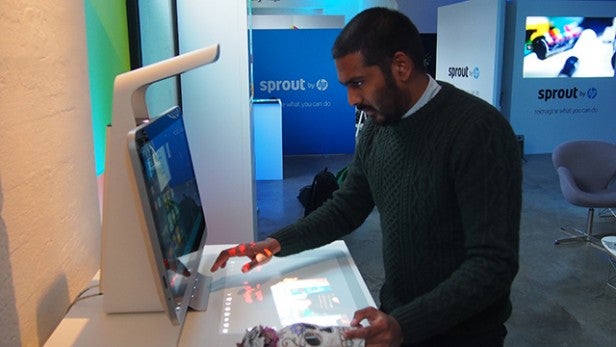 The last trick up the Sprout’s sleeve is the inclusion of Intel’s Real Sense camera. The 3D camera is capable of recognising object depth, and that means you can make 3D scans of objects. It takes around 20-30 seconds to scan items, but HP is trying to reduce that closer to the time it takes to scan 2D objects. Like 2D scans, you can pull the 3D versions into a series of applications, change the colours, textures, combine them with 2D scans and even print them out with a 3D printer. Just think what this is going to do for Photoshop mock-ups as well.

One of the nicest features and one of the most obvious uses of the Sprout is the real-time collaboration tool. This uses the 1-megapixel 720p, low-light front-facing HD camera and the down-facing high-resolution camera alongside HP’s my room video calling software to let other users see your work canvas on the touch mat and interact with it. According to HP, there’s no limit on how many people you can collaborate with, although having a good internet connection will ensure everyone has a seamless, lag-free experience. 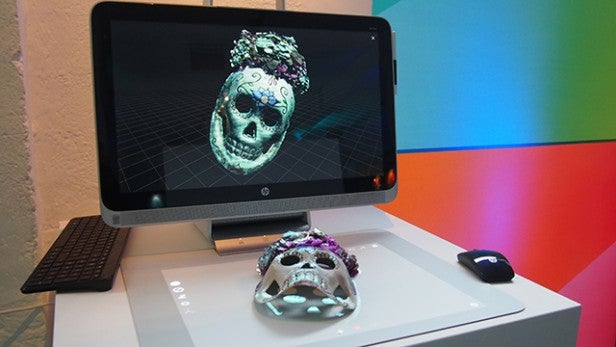 The benefit of having the forward-facing and downward-facing cameras working together is that you can see the person and what’s happening on the touch mat at the same time. Using the piano example again, this could be really useful if someone is teaching you to play and will be able to talk to you and see the keys you’re pressing.

Application support will play a major role in the appeal of the Sprout PC and, at the moment, there’s roughly 10-15 Windows 8 apps that work specifically with the touch mat. It’s a mix of first-party and third-party apps. but there’s enough variety to see some of the other potential uses for Sprout outside of the obvious creative examples.

There’s Virtual DJ, where you can interact with the decks on the mat and focus on changing tracks on the main screen. Cyberlink has added Sprout support for video-editing software PowerDirector, although it’s a clunky experience. There’s also the Dreamworks edition of StoryProducer to help make animated films and games like Teslagrad where you can customize controls. 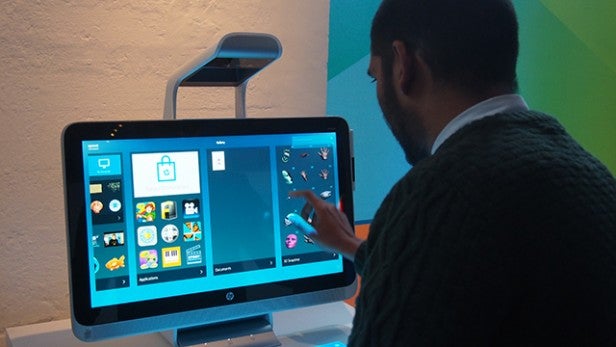 I approached the HP Sprout believing it was a PC that only designers or engineers would really benefit from, but having spent some time with it I think HP has really undersold how useful the technology could be in other areas.

There’s no doubting it’s going to be a great collaborating tool, and the 3D scanning is integrated in a really user-friendly way, but it’s the potential it could have in the learning space, and even in gaming, where having two touchscreen interfaces could become really beneficial. To get one in your home, though, you’ll have to part with £1899. That’s not cheap – only a little less than an iMac with a Retina 5K display.

My biggest concern with the Sprout setup is the touchmat and what would happen if it gets damaged. It feels pretty durable and robust, but leave it with small children to play with and there’s every chance it could pick up scratches or cuts. HP told us that it’s covered with a one-year warranty, but after that a replacement mat will cost you £299, so you’re going to want to make sure you look after it.

If HP can get the likes of Adobe to develop touchmat-optimised apps, and if third-party app support in general can improve, the Sprout could prove more than just a gimmicky attempt to make desktop PCs desirable once again.