HP rates the Photosmart 5520 at speeds of 11ppm in black and 8ppm in colour. Our five-page black print completed in 39s, giving a speed of 7.7ppm and this increased to 8.8ppm in both draft mode and in normal mode on the longer, 20-page document. Not 11ppm, but not too far off. Subjectively, this feels like a speedy printer, not waiting long either to start printing or to produce each page.

One of the key new features of this machine over its predecessor is duplex print and our 20-page document printed as a 10-page, double-sided test, produced 4.4 sides per minute. HP seems to have done some work on ink drying times, as the wait between sides is down to only a few seconds.

The five-page colour graphics test gave 4.5ppm, which is disappointing compared with the claims, but still well up compared with its price rivals. A single-page copy, which looked very similar to the original, took a respectable 27s, and 15 x 10cm photos took a minute, almost irrespective of source, which is very good.

The Photosmart 5520 can print from iOS and Android devices and the Android App is intelligent enough to pick up the printer from cold, without even a request for a scan. It also wireless printed directly, rather than via ePrint, which makes it quicker.

Duplex pages are automatically reduced in size, by between 5 and 10 percent, which is annoying, if you’re trying to produce a desktop published page. 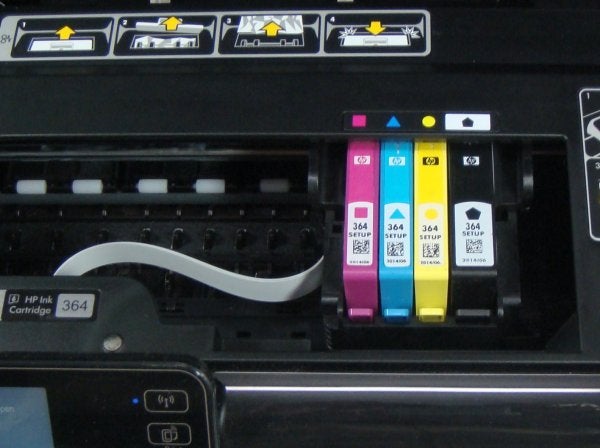 The four ink cartridges are available in standard and high yield, XL versions and using the better value, XL consumables gives page costs of 3.1p for black print and 7.4p for colour. Both these figures are better than from several rival machines, such as the https://www.trustedreviews.com/canon-pixma-mg4250_Printer_review Canon PIXMA MG4250 (slightly) and the https://www.trustedreviews.com/epson-expression-home-xp-405_Printer_review Epson Expression Home XP-405.

HP’s Photosmart 5520 continues the success of its predecessor, but adds in faster mobile print and duplex printing. It’s easy to use, quick to print, reasonably compact – though the paper supports are messy – and comparatively inexpensive to run. It’s a good, mid-range all-in-one producing excellent plain and photo prints.