HP’s mainstream, home all-in-one printer has just been updated to the Photosmart 5520, by the addition of a duplex print engine and improved wireless printing, for a range of mobile devices. It manages to combine a low-profile design with a good feature set and an impressive turn of speed.

The low-profile case is a dark brown that could easily be mistaken for black and has pleasantly rounded corners. Its top is well-balanced and lifts easily to load single sheets up to A4 onto the flatbed scanner.

In front of the scanner, slightly to left of centre, is a 60mm touchscreen with single-function touch buttons down either side. Although quite small, both screen and buttons are very sensitive and it’s easier to use these controls than to operate some smartphones. 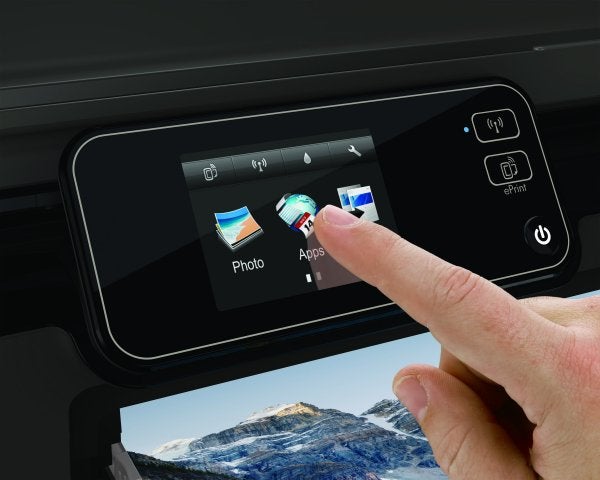 The control screens are well-designed and it’s easy to navigate via the icons and menu options, even though the screen doesn’t support multi-touch.

Below the touchscreen, at the left-hand end of the front panel, a small flip-open cover conceals a single memory card slot, which can take both SD and MemoryStick cards. While it’s quite innovative to have a combo reader like this, slotting the cards in can be awkward, as you have to hit the insertion angle quite precisely. 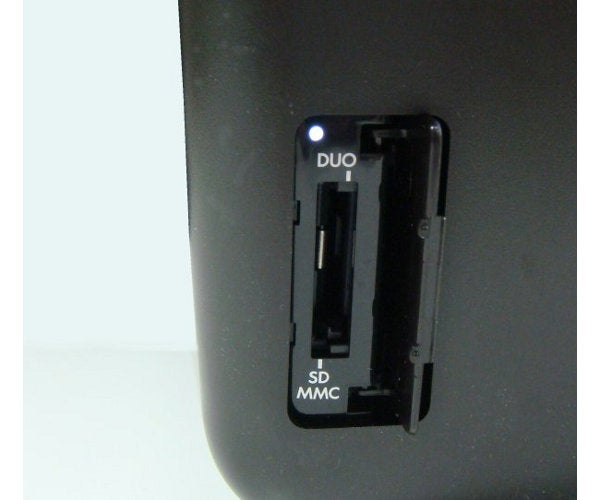 The slim front panel folds down to become the feed tray, though there’s no dust cover for the paper. The same tray takes both plain and photo sheets and pulls out from the front of the machine for loading 15 x 10cm blanks.

A support swivels out from the front edge of the tray with a secondary support and paper stop flipping over from its end. This is an awkward arrangement to catch printed pages and substantially increases the overall footprint of the printer on the desk.

There’s a single USB socket at the back, but wireless is the most versatile connection and is easy to set up. Lift the scanner section up and the printhead, with its four individual ink cartridges slides into view. It’s very straightforward to remove and replace these cartridges.