This is HP’s entry-level business laptop featuring open-source OS Ubuntu instead of the traditional Windows. Overseen by UK-based Canonical, Ubuntu is regarded as the most secure operating system around, and is slowly but surely gathering traction in the world of business.

The HP 255 G3 is powered by AMD’s A4-5000 1.5GHz APU with AMD Radeon HD 8330 graphics, and comes with 4GB of RAM and a 1TB hard drive. You also get a DVD+/- RW drive – something that’s missing from rival Chromebooks operating in the same price bracket. 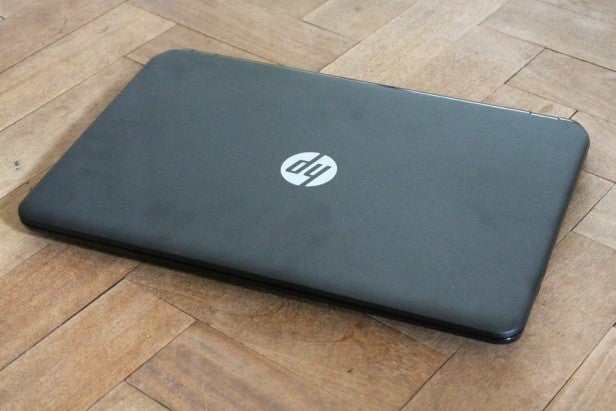 The HP 255 G3’s design isn’t likely to get pulses racing, nor inspire jealous looks from other laptop users. It boasts a totally inoffensive design with rounded edges and a matte black finish, which is prone to picking up greasy fingerprints, especially on the lid. Aside from the HP logo, it’s largely free of any detail or markings.

Opening up the HP 255 G3 reveals a little more character. The keyboard surround is fashioned from silver plastic, and the keyboard itself showcases some pleasingly clicky buttons. The trackpad is responsive and reasonably large, and the two mouse buttons are within easy reach, if a little bit spongy.

Along the edges of the laptop you’ll find 3 USB ports (one of the 3.0 variety and the others 2.0), a 10/100 Ethernet port, DVD+/- RW drive, HDMI-out, VGA-out, 3.5mm audio jack and an SD card reader. The latter sits in the middle of the front edge, which is hardly the most intuitive position for such a slot, but at least it’s there. 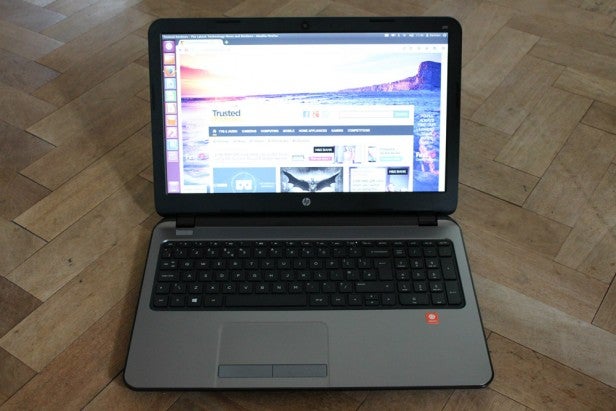 The 255 G3’s 15.6in LED screen is arguably one of its weakest features. Not only is it quite low-resolution at only 1,366 x 768 pixels, it’s also incredibly washed out and suffers from poor viewing angles. Audio is a little disappointing, too, with the weak speakers lacking punch and bass.

Despite the inclusion of an quick-start instruction sheet in the box that states the laptop is running Windows, the HP 255 G3 in fact comes with Ubuntu version 12.04 LTS installed, an open-source, Linux-based operating system famed for its high level of security. If you’ve previously been using either Windows or OS X then there’s a definite learning curve to be had – features are located in a different place, and certain tasks will be carried out in unusual ways.

A handy quick-launch dashbar can be found down the left-hand side of the screen, while general settings are accessed by clicking an icon in the top-right corner. Despite its differences from other operating systems, Ubuntu is a breeze to navigate. The big issue is that, unlike its rivals, software support is limited – there’s an Ubuntu App Store, but you won’t find anywhere near the same depth of choice as you would on Windows or Mac.

Given the business focus of this particular machine, it should come as no surprise to learn that the HP 255 G3 is supplied with Microsoft Office equivalents pre-installed. LibreOffice’s Writer, Calc and Impress replicate the functionality of Microsoft’s Word, Excel and PowerPoint respectively, and offer compatibility with files generated in those programs. Of course, you could just ignore these and opt for Google’s excellent web-based suite of office tools instead, but it’s nice to have an option for when you’re offline. 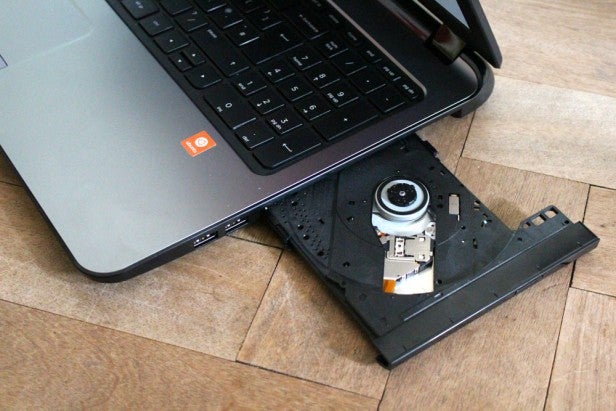 One of big advantages that the HP 255 G3 offers over its Chromebook rivals is its DVD+/- RW drive. Cloud storage may be slowly rendering physical media obsolete, but if you’re in an office or learning environment then there’s still a need to exchange data on discs. You can also use the drive to create backups, and enjoy watching movies of course.

There are a few games available for Ubuntu via the aforementioned app store, including indie hits Braid, Bastion and Cave Story. However, the majority are crude freeware releases, which are unlikely to hold your attention for more than a few minutes. 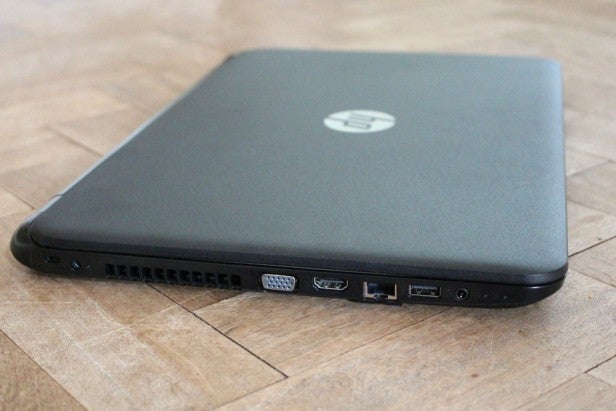 The HP 255 G3’s performance is mediocre. Moving around the Ubuntu interface is swift enough, but we noticed considerable lag when opening apps. Firefox – the default web browser – takes around 3 to 4 seconds to launch. Even after it’s fully loaded, it doesn’t provide a smooth experience – scrolling through image-heavy pages causes an uncomfortable amount of stutter, and pages with large Adobe Flash adverts take an age to fully render. Thankfully, LibreOffice applications are quicker to respond.

Video playback is a good way to test the power of a laptop, and a quick test with a YouTube video running in HD at 60 frames a second left the HP 255 G3 gasping for air. Drop the resolution down a notch and abandon the 60fps option and things become more manageable, however. The HP 255 G3’s lack of multimedia grunt is hardly a massive problem when you consider that it’s aimed squarely at business types and students.

You’ll get just inside 4 hours of use with a single charge of the HP 255 G3, which isn’t fantastic for a laptop of this size. Tinkering with the power settings will allow you to maximise its stamina – you can have the screen power off faster for example, or reduce the brightness so that it draws less juice. Even when its demands are meagre, the HP 255 G3 doesn’t last long when disconnected from a power socket, so keep this in mind if you’re often away from home for long periods of time. 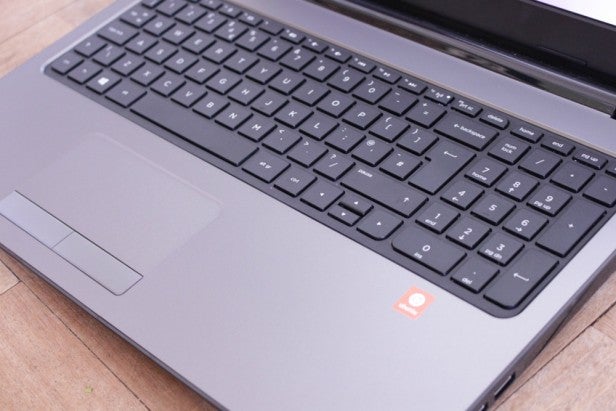 When it comes to power, battery life and screen quality, the HP 255 G3 is clearly lacking – especially when compared to some of the leading business laptops out there. However, the price is a vital consideration here – for only £199, you’re still getting a lot of laptop.

The HP 255 G3 is cheaper than Chromebooks of a similar size, and can arguably do a lot more thanks to its versatile Ubuntu OS, DVD drive and roomy hard disc. Clearly aimed at cost-conscious businesses and budget-savvy students, the HP 255 G3 makes more sense when you stop worrying about its drawbacks and consider the value for money it provides.

If you’re simply looking for a machine on which you can carry out tasks such as word processing, compiling spreadsheets and generally get things done – with some movie watching in between – then you’re unlikely to be disappointed.

Chromebooks lack full offline functionality and don’t come with optical media drives – the latter being quite important if you have a big library of DVD movies you like watching in bed or on the go. If those features aren’t important to you then it’s well worth looking at the Toshiba Chromebook 2, which benefits from better battery life.

You’ll have to get used to using Ubuntu, of course, but this highly secure OS is only going to grow in terms of software support and functionality, and provides a viable alternative to Microsoft’s Windows platform. It’s easy to see why more and more businesses are using it.

Lacking in processing muscle and boasting only a functional rather than eye-catching design, the HP 255 G3 nevertheless represents decent value for money – and serves as a neat introduction to the promising Ubuntu OS.