Available on iOS
How quickly can you move through a crowd of people, each one seemingly stepping in your path completely unaware of your existence? That’s something I’ve found myself asking more and more these last few weeks, with the almost endless summer holidays causing kids and their associated families to flood out onto the streets that, in more typical times, are usually only occupied by me and any other games journalists wandering around looking for a coffee shop with a free plug and decent Wi-Fi.

Knowing how to slip through streams of people is a careful art in times like this, and one that is crucial to any success you may be looking to have in Horizon Chase: World Tour – an arcade style racer that attempts to pool all the best elements from the kind of thrill-a-minute contests gamers were happy to spend a pretty penny or two on in the late 1980s to early 1990s. Just as in many of the games Horizon Chase is so obviously inspired by, it’s these opening moments that are so crucial to whether or not you come out on top at the end of it all.

Racing across a series of US-themed locations with visuals that ape (but do not flat out copy) every racer from Sega’s OutRun through to EA’s Lotus Turbo Challenge, Horizon Chase is a matter of dodging traffic, slicing through a sea of other cars before tussling it out with the last few stubborn opponents at the front of the pack. At your disposal is the ability to steer left or right with some virtual buttons on the left of the screen and an acceleration pedal on the right. Merely letting go of said pedal causes the car to break, though in reality Horizon Chases’ levels are designed to ensure that slowing down isn’t a task you need to undertake all too often. 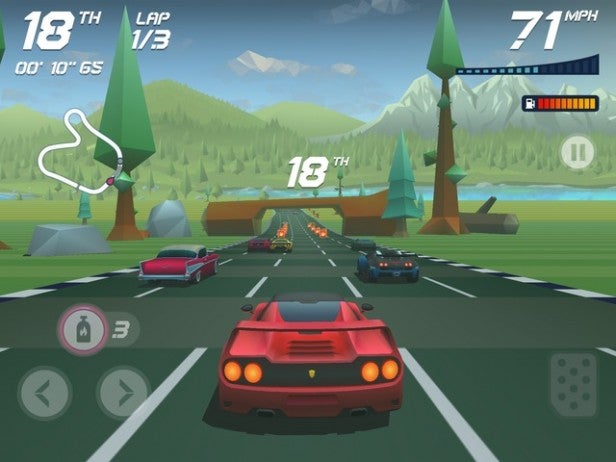 Even when the challenge starts to step up, Horizon Chase focuses not on throwing insurmountable twists and turns in your direction, but rather giving you a pack of cars to dodge instead. Contact either with said cars or the edge of the track severely dents your momentum, with one too many effectively writing off your chances of winning the race even if such calamities occur in the early stages.

It’s fair to say, however, that Horizon Chase is an easier undertaking than many of the games it is inspired by, largely because it is aware that races that required you to be particularly dexterous simply wouldn’t sit well on a t1ouchscreen device.   As such, Horizon Chase manages to give the impression that it’s a harder task to topple than it actually is, giving you the wrapper of a tricky arcade racer without necessarily forcing you to swallow the more bitter side to play that would typically have coupled an arcade racer of old.

It’s a testament to developer Aquiris Game Studio, however, that the whole package works, and you don’t necessarily notice that Horizon Chase isn’t exactly what it purports to be. Even with it’s somewhat softer touch, however, It’s by no means an easy game to master, and the addition on track of a series of other trinkets you’re tasked with picking up, from credits to fuel cans and nitro burst refills, helps add to the challenge. Amassing the former two helps to ensure you are rewarded with the best possible score for each level as you possibly can (and, indeed, to make it to the finish line requires the constant topping up of gas as you drive) with the position you finish in obviously impacting on your total, too. 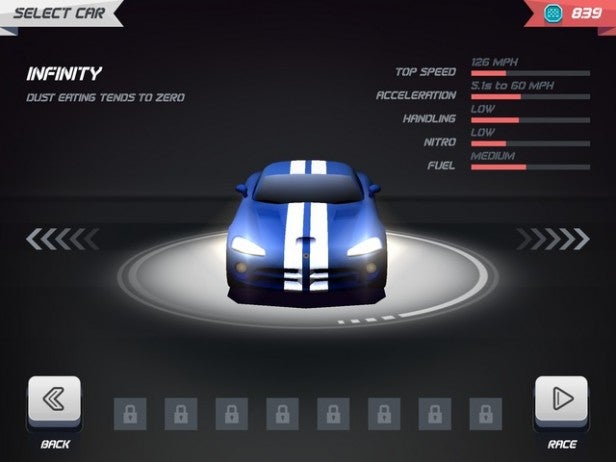 Add to this the ability to see just where you rank in a rundown of your Facebook friends and you have what quickly becomes the perfect storm: Horizon Chase: World Tour is easy to grasp but by no means a pushover, its level of difficulty ramps up steadily and is nicely married with an upgrading system that enables you to keep pace, and the ability to see how you compare with friends gives you a reason to replay even stages where you’ve already come out victorious, if only to post a slightly quicker time than your best bud.  It’s by no means a game that’s going to shake up the genre, nor is it strictly one that accurately depicts the now 30 year old titles its fuelled by, but what it manages to do is offer up a whole host of fun for very little fuss whatsoever, giving petrol heads a taste oft the games they would camp out at the arcades for decades ago that feels perfectly at home on the platform in their pocket.

Verdict
Serving up the spirit of an arcade racer of old if not the full challenge, Horizon Chase is perfectly suited to mobile play, with tracks expertly designed for virtual controls that manage never to feel to easy, nor too complex for the format they find themselves on.