An otherwise tempting device that packs in performance power for the price - despite this, the lack of Google Mobile Services is very off-putting.

The Honor 9X Pro is a mid-range smartphone from Huawei’s sub-brand. Honor is more youth-focused than its parent company, which should manifest itself in low prices, stylish design, strong gaming performance and good photography.

We had a quick hands-on session with the Honor 9X Pro before its announcement. It’s priced at €249 (~£210), and will be available from March in the following countries: France, Germany, the Netherlands, Egypt, Saudi Arabia, and Malaysia.

The Honor 9X Pro is subtle but attractive; the rear panel gives a glossy finish to a blend of deep purple and pink hues. When it catches the light, a distinctive X pattern is revealed, in a nod to the device’s moniker. It’s a pleasing and premium look that likely to be a crowd-pleaser.

Unlike the Honor 8X or Honor 9X, this back panel is uninterrupted by a circular fingerprint scanner, as that’s been replaced with a side-mounted scanner this time around, that’s imposed over the power button (see below).

The display is similarly uninterrupted by a notch as there’s a neat pop-up selfie camera instead. The LCD screen has a resolution of 1080 x 2340 and measures 6.59-inches diagonally.

The camera set-up is very similar to the Honor 9X, and that’s no bad thing. Here’s the run-down of each of the sensors: 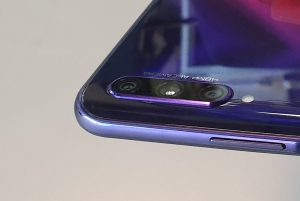 In our review of the Honor 9X’s camera we judged it to have decent colour representation and good levels of clarity. The ultra-wide camera offers additional versatility when you’re shooting landscapes, while the depth sensor’s purpose is to enhance Portrait images. Some useful software tricks, like Night Mode, definitely enhance images for the better. We’d expect a comparable photographic performance here.

Internal specs is probably where the Honor 9X Pro differs most radically from its forerunner. Most importantly, it totes a more powerful Kirin 810 chipset, which should significantly enhance performance power over the Kirin 710F on which the standard Honor 9X was based. RAM has also been boosted significantly to 8GB across all available variants and further to that, the base level storage has been upgraded to 128GB rather than 64GB, with a 256GB option also available.

The battery capacity is an impressive 4000mAh, and that can be topped up with 10W wired charging via the USB-C port.

No matter how impressive the aforementioned specifications are, the biggest issue with the phone is undoubtedly its lack of access to Google Mobile Services. This means it won’t have the Play Store or any other of Google’s familiar suite of apps, including Maps, YouTube, or Google Photos.

Instead, you’ll have to rely on the Huawei App Gallery for downloading your apps, and it comes up short compared to the Play Store, not only lacking those Google apps but also other popular ones such as Facebook, Twitter, and WhatsApp. Users might find it very difficult to adjust to life outside of the Android ecosystem.

Based on our limited time with the device, the Honor 9X Pro seems like a high-performing mid-range smartphone with impressive internals and an eye-catching design. Unfortunately however, the lack of Google apps and services ultimately makes it a really tough sell, because you’ll likely have to miss out on some of your favourite apps.