What is the Honeywell Lyric T6?

As with the rival Tado Smart Thermostat, the Lyric T6 is largely controlled by your location, turning your heating off when you’re out and back on when you’re home. It’s also the first Honeywell thermostat to hit the UK with Apple HomeKit support.

Related: Apple will save the smart home dream from itself

Honeywell has designed the T6 to be timeless and classic. It resembles a keyboard key, only it’s larger, with its plain black plastic body letting the thermostat blend neatly into the background.

There are funkier smart thermostats out there – such as the Nest – but the question is, are you going to be so enamoured of the design in years to come? With the Lyric T6, you get a clean and neat thermostat that won’t age. And, over the past few weeks, its looks have certainly grown on me. 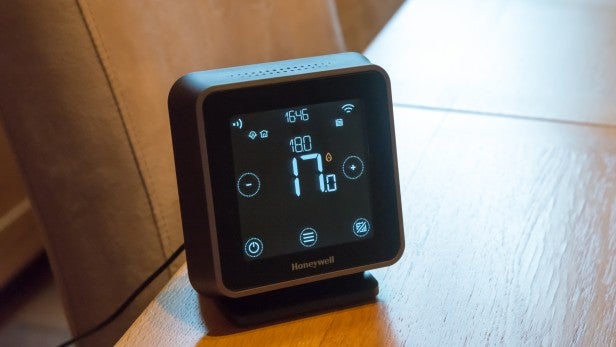 A secondary bridge box hooks up to your boiler – or, it can control a second zone – and triggers the heating to come on when the thermostat requests it. This is a heating-only relay, and there’s no option to control hot water at the moment.

How you hook up the thermostat to the bridge will depend on the version you buy, since Honeywell has two Lyric T6 models available.

The regular Lyric T6 model replaces an existing wall-mounted thermostat, using the existing wires for power and control. The second model, the Lyric T6R, costs around £20 more and connects wirelessly to the bridge. With this model, the thermostat is mounted on a stand and is powered by an external power adapter. All models of the Lyric have built-in Wi-Fi to connect to your home network. 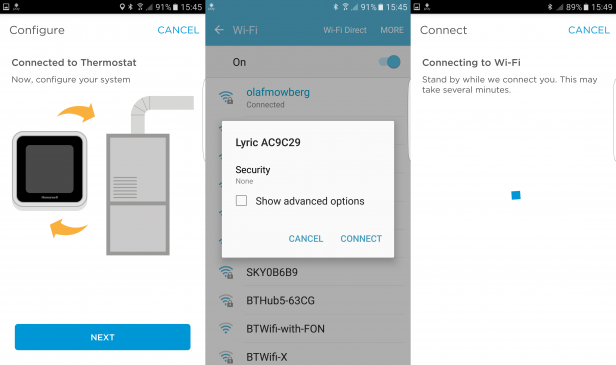 One of the first jobs is to set up geofencing, so the heating knows when to turn on and off based on your location. I like the way that the geofence radius can be set manually, rather than using an automatic range, so you can make the system work the way you want.

Honeywell offers support for multiple users, so that you can kit out everyone in your house with the app and a user account. It means that your heating won’t turn off just because one person has left. 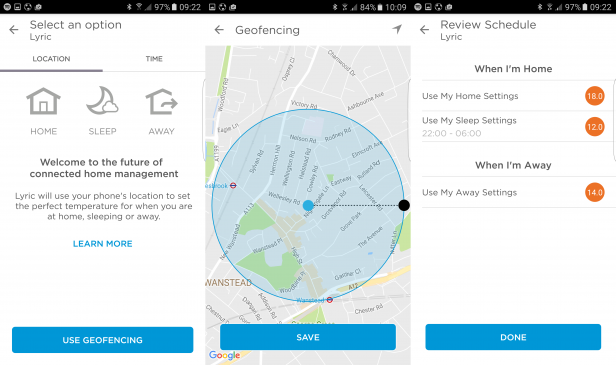 For Home and Away you set the temperatures you want, but the mode is activated by your location only.

Sleep mode lets you set a temperature and define an on/off time, so you can have the heating turn down when it’s time for bed. Running in this way, the Lyric T6 should be set-and-forget, so you should have to touch the thermostat or app rarely, letting the automatic settings deal with your heating.

Alternatively, you can create your own schedule, choosing when the heating comes on and off, just as with a regular thermostat. There are options to have the same schedule every day, a different schedule for weekdays and the weekend, or you can set each day individual.

Frustratingly, choosing the scheduled mode disables geolocation. It seems a little unfair that you can’t have customisation and convenience. Tado, in comparison, lets you set a schedule and turn on geofencing. 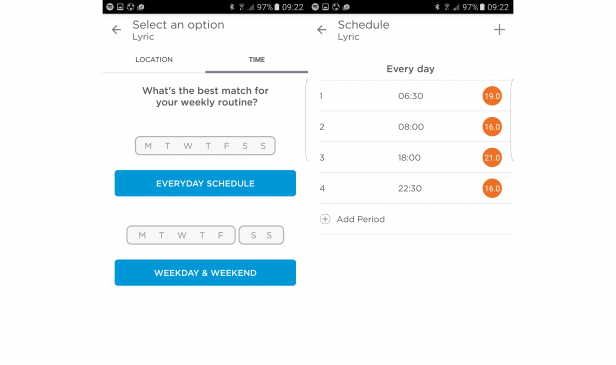 Honeywell has made the Lyric app simple to use, with a big temperature dial dominating the interface. Spinning the dial turns the temperature up.

With geofencing turned on, temperature changes are kept until the next state change, such as Sleep or Away modes being activated. If you’ve turned on a full schedule, temperature changes are kept, by default, until the following morning, but you can set changes to be permanent or configure them to run on a timer. Again, it’s a shame that you don’t get the same flexibility when the geofenced mode is enabled.

You can also turn your heating on and off, and manage temperature directly from the thermostat. Its touchscreen is quick to respond to commands, and the simple, clear display makes it both the set temperature and the current temperature obvious. 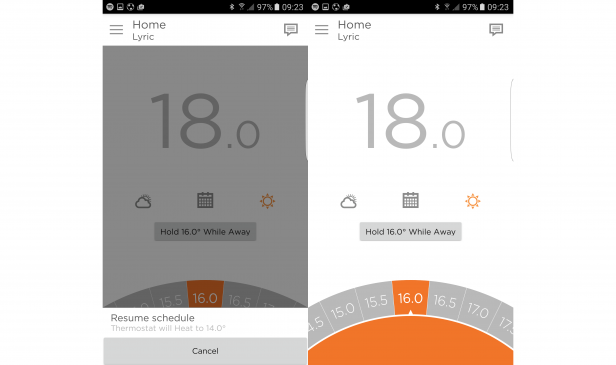 I like the Holiday mode, which allows you to input into the thermostat when you’re away, when you’ll be back, and the temperature you want to keep your house at while you’re away. You won’t have to remember to turn the heating back on on your return, so you’ll be met by a nice, warm home. 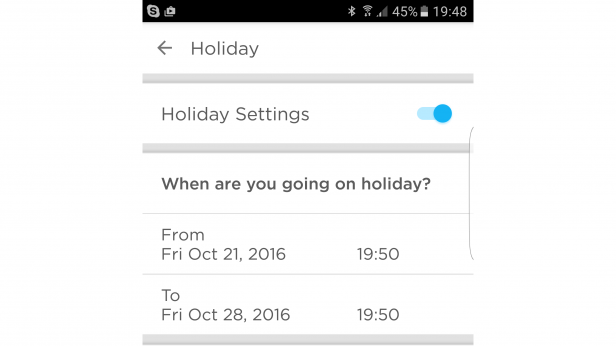 Over time, the Lyric T6 learns how long your home takes to warm up. If you turn on Optimised Start, the Lyric T6 can use this information to turn on your heating early, so that your house is warm by the start time you’ve set. For cold winter mornings, this is a great option, as you can ensure that your house is warm by the time Sleep mode ends and you get out of bed.

Since the Lyric T6 is HomeKit-enabled, you can set the thermostat’s temperature using your voice by talking to Siri. As of iOS 10, you can also use the Home app for control. From the Home app, you can change temperature, but the controls are a little clunky and nowhere near as neat as those in the Lyric app itself.

Using voice commands with Siri is better and more natural, with the thermostat changing temperature almost instantly after I’d issued my commands. The downside of Siri is that to use it, you have to have your phone out and available. Newer iPhone models listen out for the “OK Siri” wake command, but this only works if the phone’s screen isn’t covered.

Amazon Echo (Alexa) and IFTTT support are due to come online soon. Echo support, in particular, makes much sense as you can just ask for a temperature change without having to fish your phone out of a pocket, with the system always on and ready to respond to voice activation.

Should I buy the Honeywell Lyric T6?

Honeywell has done a good job with the Lyric T6 and T6R. They’re quick to respond, and the geofencing worked well in my tests.

Competition is stiff, however, and the Tado Smart Thermostat is the closest rival. The Tado’s scheduling is more flexible and you can upgrade the system with smart radiator valves for room-by-room control. It also supports HomeKit, Echo and IFTTT. That said, it’s more expensive (£199 for the kit, plus £79 if you need the Extension bridge to connect to your boiler).

Given that Honeywell’s T6 kit includes the bridge, it’s excellent value. If you just want a smart thermostat that you can largely set-and-forget, with a bit of manual control to tweak temperature, then the T6 is a great choice. However, more flexible scheduling in combination with geofencing would improve this product.

A neat and responsive thermostat, the Honeywell Lyric T6 has a great app and geofencing, but scheduling isn’t very flexible.