An evaporative cooler, the HoMedics MyChill Plus uses a tank of water to cool air through evaporation, giving you a dose of cold air at a lower temperature than the ambient room. It's a simple cooler to use and looks neat, but lacks some of the features and information of other evaporative coolers that we've tested. This is a decent choice for personal cooling but it's a touch on the noisy side.

HoMedics is perhaps better known for its air purifiers, but it also makes the MyChill and MyChill Plus evaporative air coolers. For about £20 more than the standard model, the HoMedics MyChill Plus adds an extra fan speed setting, slightly improved cooling and a marginally extended cooling zone, but otherwise they’re essentially the same.

The HoMedics MyChill Plus does produce cooled air at close range, but despite a long run time and low power consumption, it’s more expensive and than some other evaporative coolers we’ve tested, and lacks the advanced features of rivals like the Evapolar Personal Air Cooler.

HoMedics MyChill Plus – What you need to know

The HoMedics MyChill Plus produces a breath of cool air, but only up close

The HoMedics MyChill Plus is a simple cube-shaped cooler, a little smaller than a football. On top, there’s a power switch and a selector between three fan speeds, and an LED which tells you when the 950ml water tank is running low. To get started, you fill and refit the water tank, wait for it to prime the reservoir in the base, then fill and refit the tank again. A sticker reminds you that you’ll need to wait a few minutes for effective cooling. 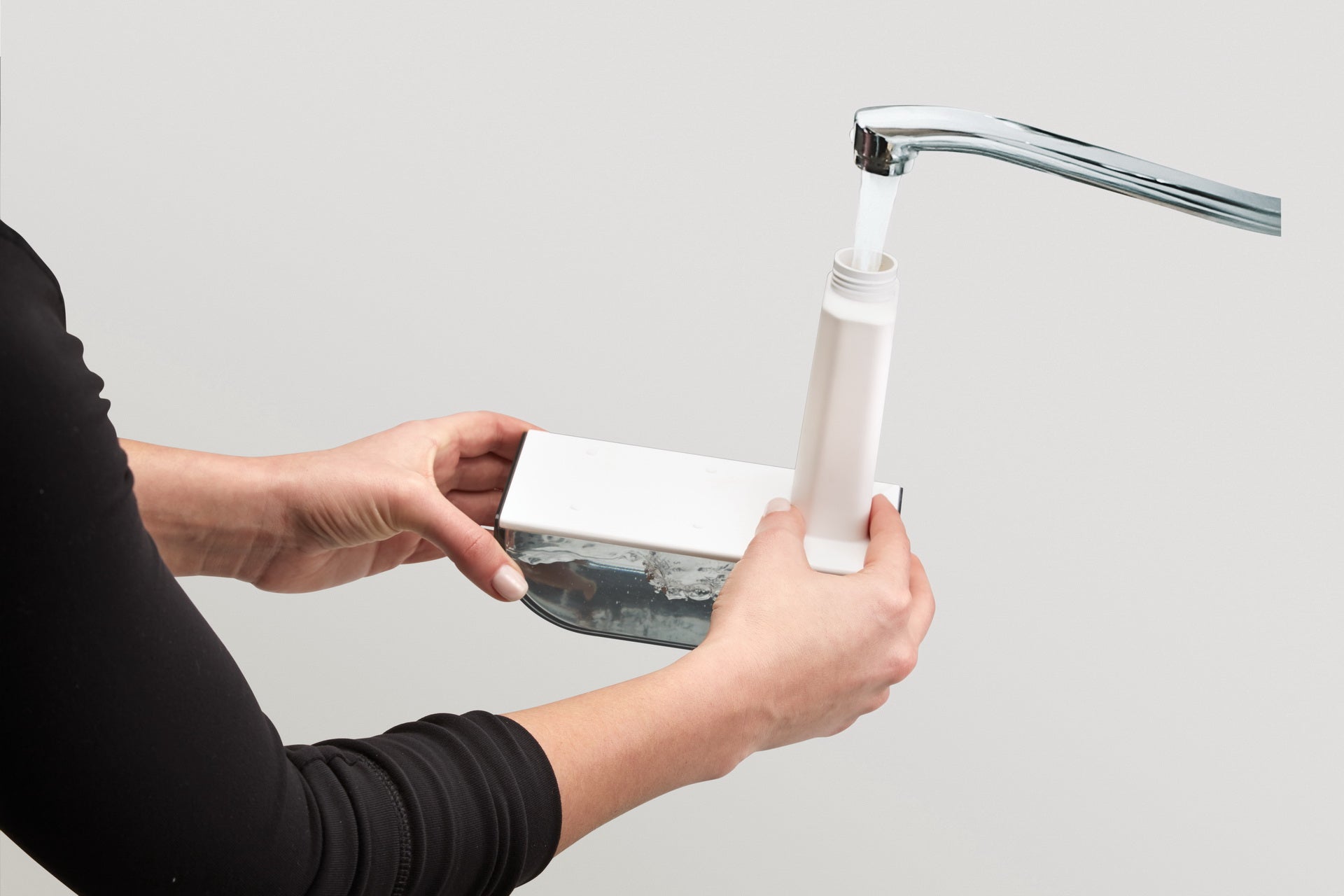 Like other evaporative coolers, the HoMedics MyChill Plus combines a fan with a filter, through which moist water is pumped. As the water evaporates it cools the airflow, but also increases its humidity. Evaporative coolers work best on dry days, but it was slightly humid when we tested. The MyChill Plus was effective at short range but less so with distance.

Unlike some bigger evaporative coolers, you can’t boost the MyChill Plus’ performance with an ice pack or ice cubes – you can’t fit them in the water tank, and there’s only space in the reservoir for one or two small cubes. Two latches let you remove the entire top section to clean and dry the reservoir for storage, or to fit a new filter when needed. There’s a light to tell you when you need a new filter, and replacements cost just £8.

Enough puff from the HoMedics MyChill Plus, but only moderate cooling

With both a water pump and a small-diameter fan, the MyChill Plus isn’t especially quiet on its lowest setting. We recorded 35.0dB from one metre in front, rising to 40.5dB at full power. Despite soft rubber feet, it transfers some vibration to the desktop, which can resonate and amplify the sound.

Wind speeds were more than adequate for personal cooling, ranging from 1.4m/s up to 1.9/ms when measured at 15cm, and 0.8m/s to 1.3m/s at one metre. Power consumption ranged from just 2W at the lowest setting, to 4W on full – a tiny fraction of what we’d expect from a compressor-type air conditioner. 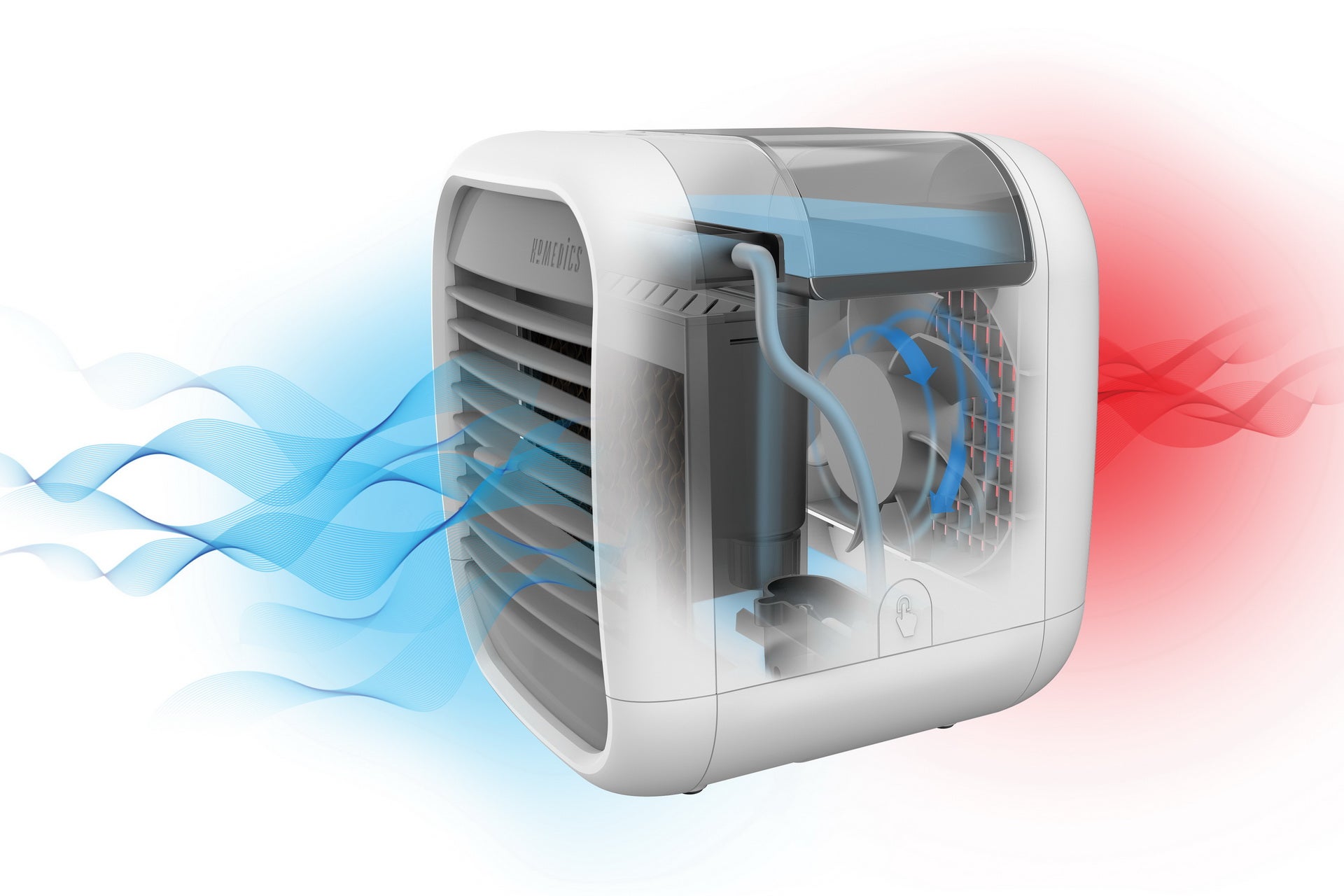 Tested with an ambient temperature of 22℃, the MyChill Plus cooled air to 19.4℃. This was enough for a noticeably cool breeze, but measured at one metre the air temperature had already risen to 20.3℃, highlighting that this product is only designed for close-range use.

We’ve seen better performance, but evaporative coolers work best in hot, dry conditions, and we tested at a slightly elevated humidity of 60%. HoMedics says that the MyChill Plus can cool air by up to 8.7℃, and we’d certainly expect a significantly lower output temperature at a more typical summer humidity of around 50%.

Humidity also increases the runtime of an evaporative cooler. In normal conditions, HoMedics says that the MyChill Plus’ water tank should last for six hours – almost enough for a working day or a good night’s sleep. In fact, it lasted for more than nine hours in our humid test environment.

Should I buy the HoMedics MyChill Plus?

The MyChill Plus is an effective desktop air cooler, creating a refreshing environment provided you sit within its range. It’s efficient, and could run for almost a full working day between water refills. It could keep you cool at night, too, but only if the moderate noise didn’t bother you.

The MyChill Plus lacks the stylish design and useful display of the EvaPolar Personal Air Cooler, but it’s cheaper, comes with a three-year warranty, and its replacement filters cost much less. If value is important, the MyChill is a good choice choice, but otherwise we’d take the EvaPolar.