Hisense is clearly aiming to bust the myth that only premium washing machines can achieve really good energy efficiency. The WFH8014 is a budget-friendly £250 or less, and yet boasts an A+++ energy rating, 1,400 maximum spin speed and big 8kg wash-load capacity.

Want even more for your money? This model uses sensor technology to determine the size of your load and adjusts water, energy and time for the most energy-efficient wash. It looks the part with its rotary selector knob, large door and neat LED display too. Factor in the decent cleaning results and you have a a good-value machine.

The big porthole door is right up there with current styling trends, but it opens to reveal a fairly small actual opening. While this won’t hinder you in loading 8kg of clothes, ramming in a duvet or a big puffer jacket will require some physical effort. 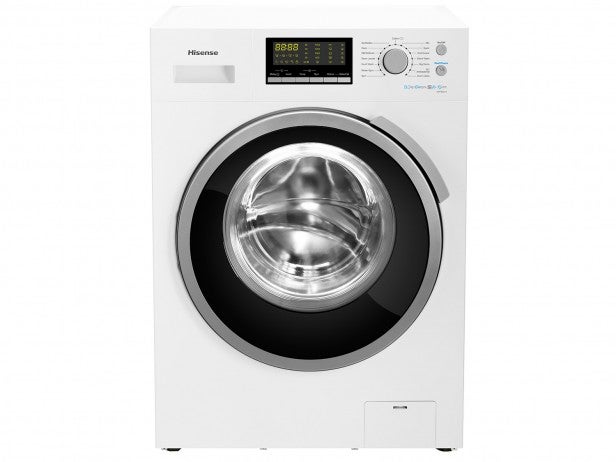 Day-to-day use couldn’t be easier, however. A simple rotary programme selector and options buttons are a breeze to use. The green segmented display is crisp and clear, and has a number of bright LEDs that illuminate to indicate such options as spin speed, rinse hold and so on. While it isn’t as slick-looking as an LCD panel with bespoke graphics, it offers enough clarity to ensure you know what’s going on.

The chunky selector has a solid, positive feel and clicks satisfyingly into place on each programme. Slightly unusually, it sits on the right of the fascia. This means you select the programme, move your hand left to the display to adjust the options, and then back to the right to start the machine. Hardly a deal-breaker, but it isn’t quite as intuitive as it could be.

The options buttons themselves are bold and easy to understand, and click positively when pressed. To the right side of the display the buttons scroll through further options in order, with LEDs offering further guidance. The soap dispenser drawer and the pump filter are about as traditional as you can get, so won’t cause be the cause of any operational difficulties.

One nice touch is a residual water-draining hose down by the filter. So when it comes to cleaning out the filter, it’s simply a matter of draining out the last of the water before opening the filter, rather than the more traditional manoeuvre of opening the pump chamber and mopping up the spill afterwards.

Hisense isn’t claiming miracles of super-low noise for the WFH8014, but at this price you really can’t have everything. The figures in the documentation and on the Energy Label say 58dB through the wash cycle and a fairly noisy 77dB at full spin. The latter is the sort of sound level at which you’d watch TV, so it’s certainly noticeable. 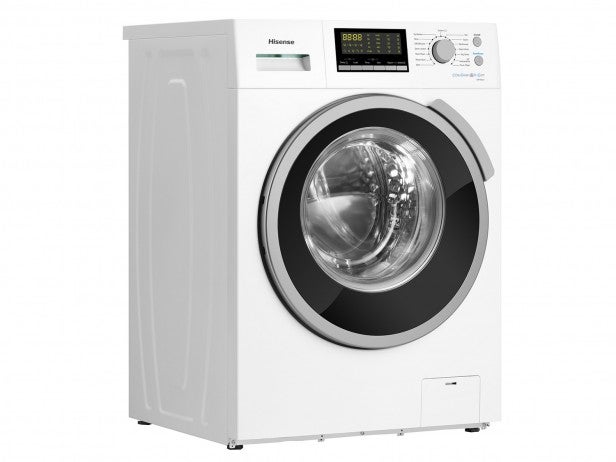 The reality isn’t far from those figures. Wash noise averaged around 56dB, with a peak to 59dB every few minutes, and the long spin at the end was exactly 77dB. Even at full spin, that’s less noise than that made by most vacuum cleaners make, but it clearly isn’t a machine you’ll want running if you like to take a cat-nap at the kitchen table.

Hisense WFH8014 – What programmes does it have?

The WFH8014 is a 15-programme washing machine with a decent spread of wash cycles. The headline programmes are Cotton, Synthetics, Wool, Delicates and a Mixed wash programme that covers most of the day-to-day washing requirements. An extra gentle Handwash cycle, the Sportswear programmes and a Quick wash are handy extras.

Slightly more unusual are a Silent Wash programme, which aims to reduce noise output a little (it wasn’t silent!) and dedicated Big Items programme, ideal for when you’ve successfully managed to jam that duvet or puffer jacket through the door.

Something of an old-school addition to the programme list is a 95oC wash cycle, designed as an antibacterial wash for sterilising clothes and linens. Back when I was installing washing machines in the 1980s, we used to call this a “boil wash” and it was the default programme of choice for terry-towelling nappies. Remember those?

A few more mundane spin-only and drum-clean cycles complete the 15 programmes. For most programme cycles you can then opt to adjust temperature and maximum spin speed, add rinse hold, extra rinses, or engage a pre-wash or intensive wash cycle for particularly mucky loads. There’s also an Eco button for further trimming down your electricity and water consumption, albeit with not quite such effective wash performance.

When machines costing little over £200 come to the test bench, we rarely expect anything more than basic wash performance. Yet the WFH8014 turned in some very respectable results on our stain strip test using a full-load Cottons wash and non-biological powder.

Across the five key stains of ketchup, turmeric, coffee, oil and blood – all dried in for 24 hours for good measure – this Hisense turned in a great performance.

While the turmeric and engine oil stains were still clearly visible, we had to put the cloth strip on a light box to reveal residues of the other three spills. Although the dark stain areas were all just about visible, a clean with biological powder would have resulted in whiter than white in these three areas.

Spend twice as much on a washing machine or more and we’d expect the stains to be gone altogether, but considering the WFH8014 is such an affordable washing machine, this is a great performance.

That A+++ energy rating promises to keep your electricity and water bills low. On our main Cottons wash with a full load, the WFH8014 certainly lived up to that billing.

Filled with 6.4kg of washing – 80% of maximum capacity being how most people tend to load their machines – the wash used just 0.855kWh of electricity. With most power suppliers charging around 15p/kWh, this amounts to less than13p per wash. If you’re on metered water, its 51-litre consumption is very frugal for a budget 8kg machine on a full load.

The main wash cycle was unusually speedy for an A+++ machine too, coming in at just 2hrs 18mins. Super energy-efficient machines often run a lot of soaking time in the main cycle, which frequently results in a wash time of more than 3 hours. By comparison, this Hisense is pretty nippy.

Official energy label testing is carried out on a full load of one cycle, and manufacturers – particularly on budget models – will often focus their efforts on getting that one cycle perfect. Other cycles and half loads usually play second fiddle. In the Hisense’s case, half load is the second fiddler’s understudy.

Our half-load Cotton wash actually managed to use slightly more electricity than a full load, albeit trimming 10 litres of water consumption and a few minutes from the wash time. Running the same half load on the Cotton Eco setting improved things a little in the energy department, using just 0.8kWh. It also further reduced water usage by another 5 litres to a total of 35 litres. That’s exceptionally good use of water for a budget machine.

The 1,400 maximum spin was almost exactly what we’d expect from a machine at this price, resulting in 2.1kg of water remaining in the clothes after the full wash – or about 33% of the dry weight.

The half load’s reduced spin duration resulted in this dropping to 38% (1.2kg of water in 3.2kg of dry clothing). Oddly, the Cotton Eco programme ran longer, improving spin efficiency and turning in a very healthy 31% (1.0kg) spin efficiency with the same load.

The take-home conclusion here is that this Hisense is impressive at saving you electricity and water consumption as long as you stuff it to the gunnels. Although washing half-loads saves you a little water, it’s only by about 20% on a full load. Choosing the Eco mode helps a little for half loads, but since this machine turns in such good results with a full load, collecting together big washes is the best way to use it.

Our standard calculations are based on an average family running 240 washes per year, 40 of which are half load and half of those on the Eco setting. In these circumstances, this Hisense would cost a very respectable £31 per year in electricity and, should you be on metered water, a very low £41 in water bills. A great result and confirmed A+++ efficiency. 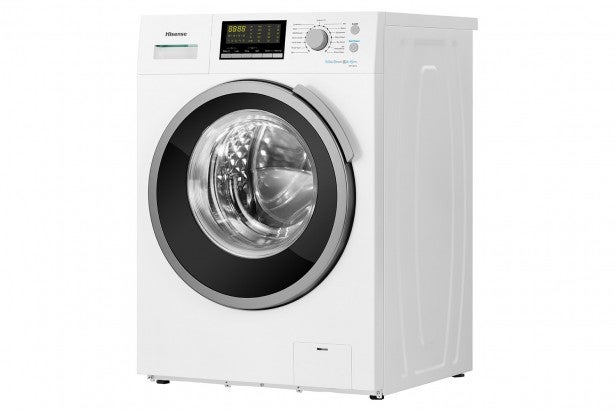 Good wash results, frugal electricity and water consumption with full loads, and sharp styling rarely come together on a washing machine at WFH8014’s budget-busting price. Spin performance and noise aren’t bad for the price, either.

It’s only this machine’s poor half-load energy consumption that lets it down. If you stick to basic washes and full loads, however, the Hisense WFH8014 offers great performance and outstanding value for money.

A good-value machine that provides decent washing results and energy efficiency for a surprisingly low price.