With two combi modes and seven auto settings, the Hisense H28MOBS8HGUK doesn’t have the widest range of programmes. However, the existing functions are mostly easy to activate using clear control panel shortcuts – as long as you can get past pressing the sometimes fiddly touch buttons. While the defrosting can be a little patchy here and the hazard yellow oven light causes some visibility issues during grilling, the appliance delivers nicely browned bread, reheats rice evenly and cooks jacket potatoes quickly in both microwave and combi modes.

The Hisense H28MOBS8HGUK is a turntable microwave that comes with a built-in grill and offers some combi functionality. While it doesn’t have quite as many auto programmes as its mid-range rivals, the ones available are effective.

The exclusively touch-operated controls can be a little fiddly, but they also hide some very handy shortcuts, allowing for speedy activation of cooking.

The Hisense H28MOBS8HGUK is a sleek black box, albeit one that will quickly get covered in fingerprints. Its plastic-coated control panel is entirely made up of touch buttons that are not always very responsive, with no dial for time or weight selection. Instead, you get numbers from 1 to 9, as well as Stop/Cancel, 0, and Start/+30 Sec keys in the lower half of the panel.

In the top half of the panel, there are touchable icons for Cooking Time, Weight/Time Defrost, Clock/Timer, Power Level, My Plate (a weight-based multipurpose automatic programme), and Grill/Combi.

In the middle, you’ll find the rest of the auto programme shortcuts: Popcorn, Potato, Pizza, Vegetable, Beverage, and Meat. Many of these programmes have two or three weight or volume-based sub-settings, which are presented as the actual weight in some cases – such as 200 for 200g for Vegetable – but, bizarrely, by numbers in others, such as 1 for 200g, 2 for 400g, etc, for Potato.

Still, it’s handy to have all the auto programmes spelt out, rather than having to look up obscure code meanings in the manual. As a bonus, the 1-6 numeric keys also function as quick-start buttons, beginning express cooking for the target number of minutes at full power. The Start/+30 Sec key also allows you to start cooking immediately or add further microwaving time in 30-sec increments.

Power levels are available in 10% increments from 0% (recommended for deodorising) to 100% by first pressing the power level button and then using the numeric keys.

There are two combi settings: 55% microwave/45% grill, which is recommended for puddings, soufflés, omelettes, baked potatoes and poultry, and 36% microwave/64% grill, suggested for fish and gratin dishes.

Multi-stage cooking is also available, allowing the setting of two programmes – such as defrosting and combi cooking – to run consecutively. Meanwhile, a memory function enables you to store up to three programmes with customised cooking time and power levels as favourites – although these are only kept as long as the microwave remains connected to power.

A child lock can be activated by holding down the Stop/Cancel button, and the keypad beeps can be turned on or off by pressing key 8 for a couple of seconds. Additionally, the appliance can simply be used as a timer for up to 99mins and 99secs.

I started my tests by defrosting two slices of frozen medium white bread using the time-based defrost function. After 1min, having flipped the bread over after 30secs, the slices looked patchy on my thermal camera, and there were some harder bits that felt frozen to the touch. After another 20secs, the bread still seemed patchy on thermal imaging, with apparent warm and cool patches, but it was no longer frozen, rendering it usable.

I had better – although much warmer – results with the weight-based defrost setting, which is more suitable for thicker foods. The appliance suggested a 2min50sec cooking time for 100g of frozen food (the bread weighed about 75g, with 100g being the closest setting), and alerted me to flip the bread halfway through the programme. The outer edges of the slices looked white-hot on the thermal camera, and the bread felt soggy to touch – but there was no visible patchiness.

The grill setting proved impressive, delivering evenly browned bread. However, keeping an eye on the food during grilling was a little complicated. While the visibility through the viewing window is decent here, the internal light is a strange hue of hazard yellow, making it difficult to gauge how well the food is browning.

I grilled two slices of defrosted bread for 10mins on the wire rack, flipping them halfway through. The bread came out quite crisp and a little on the dry side, so perhaps three or four minutes on each side would have sufficed.

For another evenness test, I microwaved 200g of cooked fridge-cold rice with two tablespoons of water at full power. The interior of the appliance got quite steamy, but after just 2mins of heating, the rice measured 96°C at the centre and a safe 82°C-86°C around the edges.

Next, I turned my attention to jacket potatoes. Cooking a 360g potato using the automatic 400g Potato setting took 8mins (plus 1min standing time). The interior got quite steamy during cooking and the potato came out looking a bit deflated and wrinkly. My temperature gauge showed a 98°C internal temperature, and there was little resistance when cutting the potato open, with its core appearing white-hot on the thermal camera. Yet, the potato wasn’t too mushy and still had some bite to it.

I used the C-1 combi mode (55% microwave/45% grill) to cook a 330g potato for 15mins. The manual encourages the use of the wire rack here, which proved handy in terms of keeping the potato close to the heat source as well as providing nice grill lines. The recommendation to turn the food over from time to time is also emphasised in the manual, so I flipped the potato after 7mins30secs.

Although its skin was still a little wrinkled, the top of the potato came out crispy. The core, which measured 94°C, looked white-hot on the thermal camera and was pleasantly mushy, indicating the potential for an even briefer cooking time.

As the manual describes the grill setting as best for thin slices of meat, skewers, sausages, etc, I also used it to cook some frankfurters on the wire rack. While the frankfurters seemed done after about 8mins – with their skin starting to split – they didn’t really brown at all, even after I left them under the grill for another 7mins.

If you want an affordable combi microwave with a turntable, then this is a decent choice.

If you want more features and automatic programmes, look elsewhere.

The Hisense H28MOBS8HGUK is a decent affordable combi microwave. Unlike its closest rival – the slightly pricier Hotpoint MWH 26321 MB flatbed microwave – the H28MOBS8HGUK doesn’t come with a crisp plate and extra auto programmes with recipes, but it delivers mostly well-cooked results in an equally timely manner. 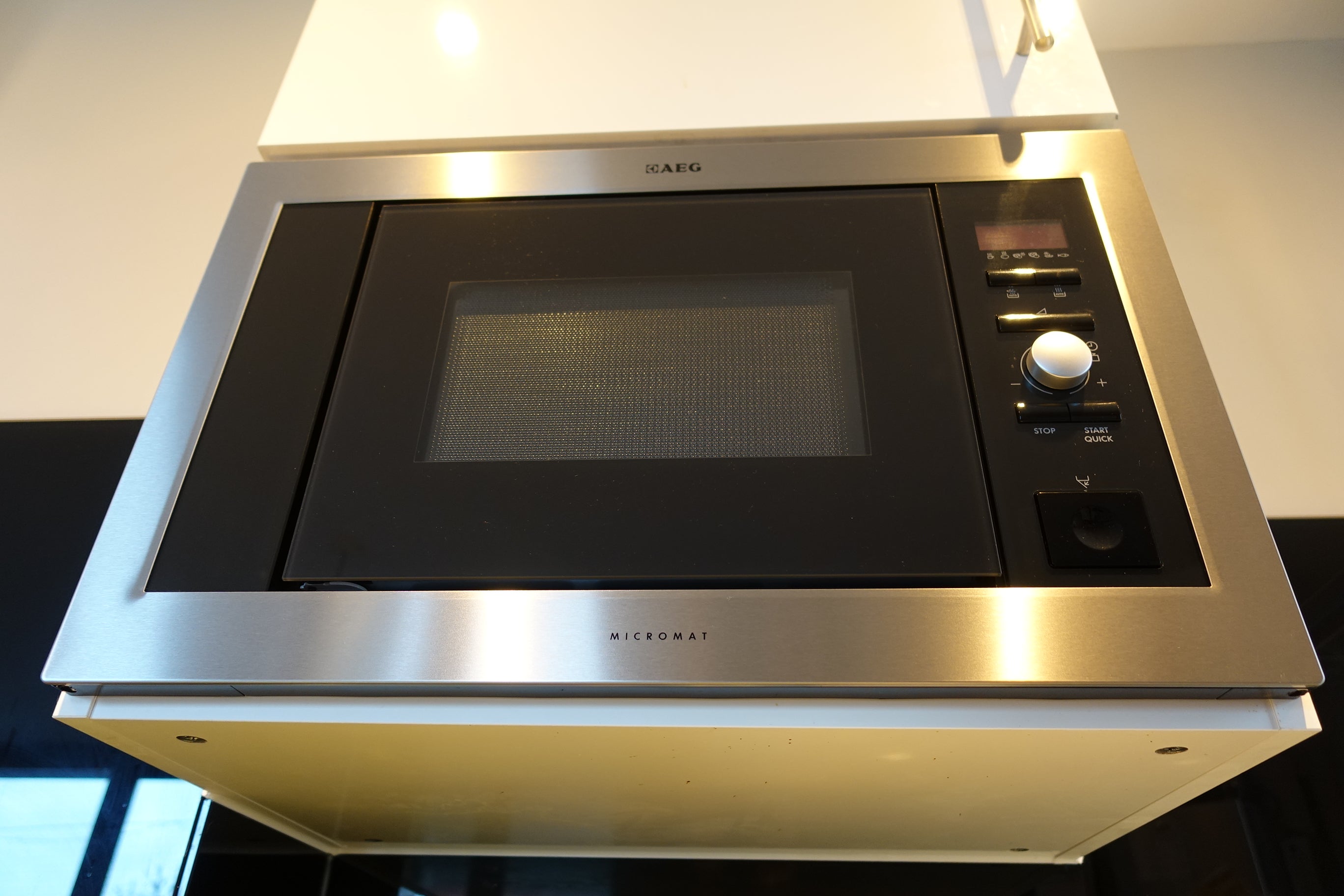 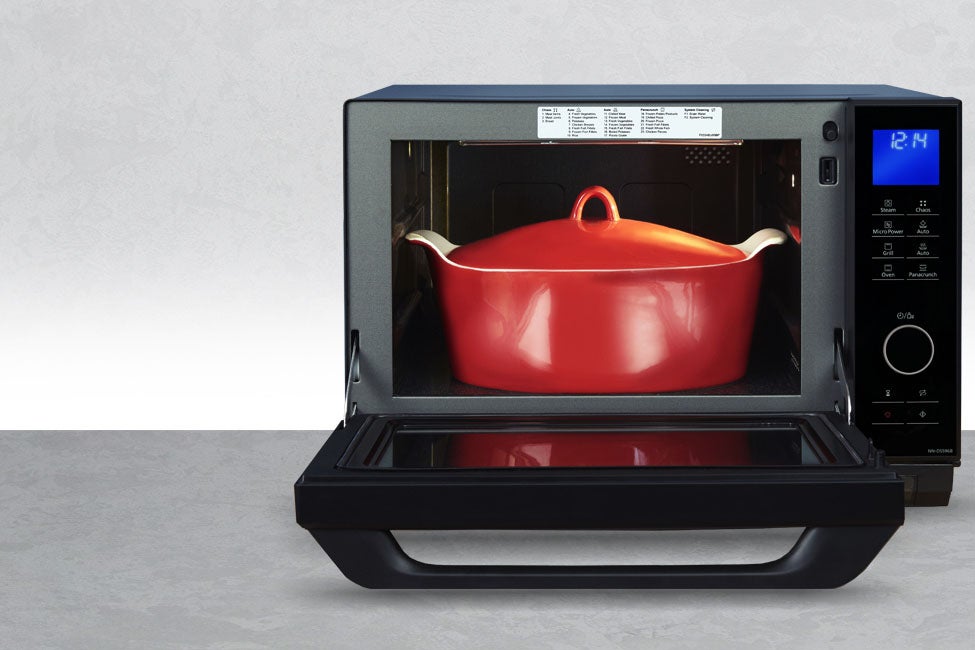 How to use the right microwave power settings 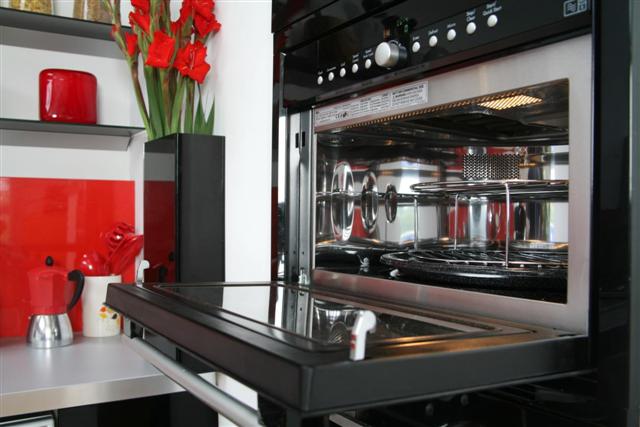 What other modes does the Hisense H28MOBS8HGUK have other than the microwave?

It has a grill, too.

How big is the Hisense H28MOBS8HGUK?

There’s an internal capacity of 28-litres, which is enough for most plates.

Does the Hisense H28MOBS8HGUK have a flat bed?

No, it has a turntable.