Hisense sure does like a big number. Not content with displaying the 100-inch Hisense H100LDA Laser TV on its IFA 2018 stand, the Chinese megabrand was also showing off a 4K LCD TV boasting more than 5,000 local dimming zones.

In other words, the 75-inch 75U9D puts its lighting directly behind the screen rather than around its edges, and can simultaneously control the output of more than 5000 zones of those lights at any given moment.

Given that even super-star TVs such as the Samsung Q9FN series only use under 500 dimming zones, the picture quality the 75U9D has the potential to deliver is clearly immense. 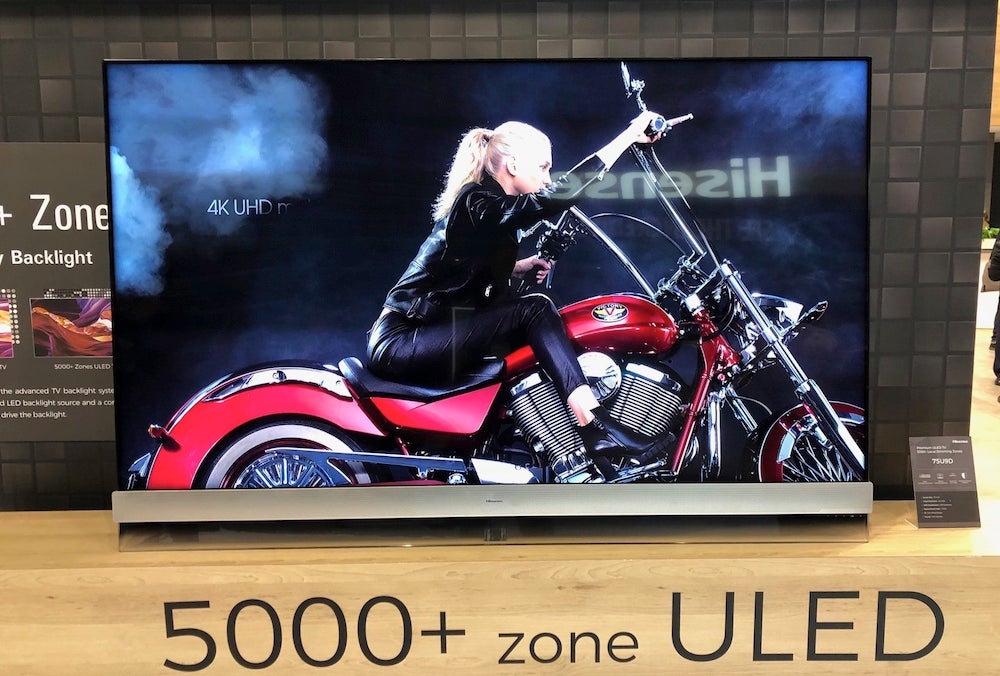 The ‘ULED’ 75U9D certainly stands out. Its ‘pure metal’ design and gleaming finish give it a truly premium look, while a large, attractively finished speaker beneath the screen promises to deliver a more powerful, more direct sound than most LCD TVs.

It turns out that its 5000+ dimming zones are just the start of its picture boasts. For instance, the 75U9D’s brightness is reckoned to be more than 2500 nits – the highest we’ve seen promised on any TV bar the Hisense 75U9A and the Samsung Q900R.

This brightness, together with the black level potential of being able to deliver different light outputs simultaneously from 5000+ different parts of the picture, leads Hisense to claim a huge contrast ratio for the 75U9D of 150,000:1. If this figure is even close to being real, it should prove helpful to the 75U9D’s HDR playback, as should its use of Quantum Dots in delivering its colours.

Alas, Hisense wasn’t running the 75U9D in any dark room situations at IFA. On the contrary, it had stuck it slap-bang on the front of its IFA stand, right where it could be assaulted by all the brightest show lights. As a result, it was impossible to form any reliable thoughts on its real-world performance with regards to contrast.

Hisense had at least helped us out a bit by sitting the 75U9D right alongside a 75U9A, a set that I’m familiar with having just reviewed it. And the extent to which the U9D outgunned the U9A was pretty remarkable. 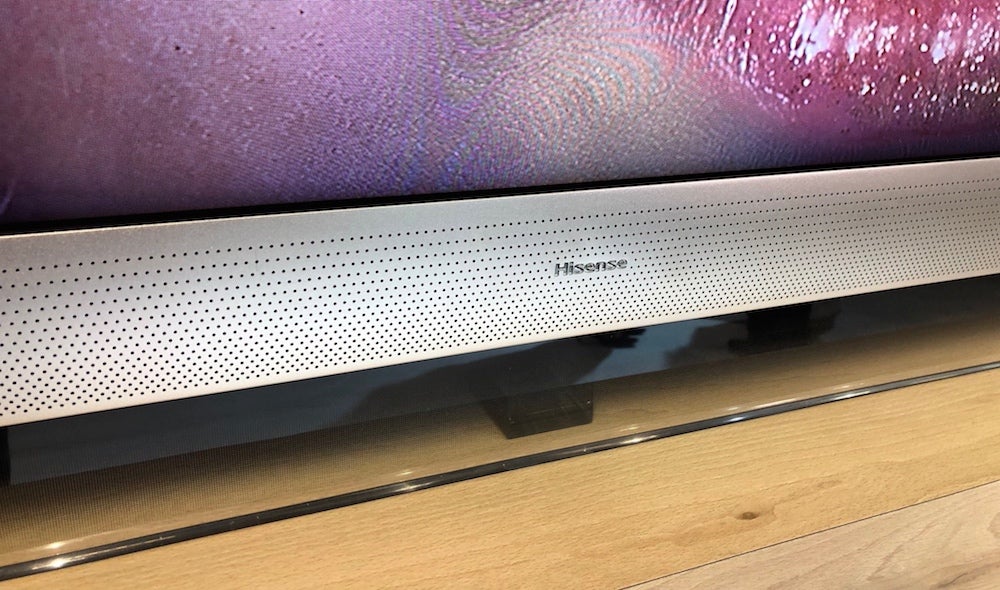 Particularly unexpected is the brightness of the new set. I know I stressed earlier that its 2500 nits of claimed light output is huge by domestic TV standards. But the 75U9A’s brightness is supposed to measure more or less the same.

Yet in Hisense’s demos the 75U9D looked far more bright, dynamic and intense. A result, I can only imagine, of all those extra dimming zones, which allows it to emphasise the dynamic range between its brightest and darkest image parts.

Its colours look far richer too than those of the 75U9A, too. This is important given that my main issue with Hisense’s current high-end 75-inch model was that its colours look rather washed out and unnatural.

As I noted before, it isn’t possible to judge black levels against the TV world at large when you’re standing on the IFA show floor. But they did look deeper on the 75U9D than the already respectable efforts of the 75U9A.

What’s more, as you’d hope, there seemed to be much less ‘blooming’ of the backlight around stand-out bright objects than you could see on the 75U9A – especially during off-axis viewing.

That said, it’s worth remembering that the 1000+ zones of the 75U9A were outperformed by the 400+ zones of the Samsung Q9FN TVs, proving that it isn’t just the number of zones you have but what your processing does with them.

So the jury is still out on how much the 75U9D makes its 5000+ zones count until we can review one properly. 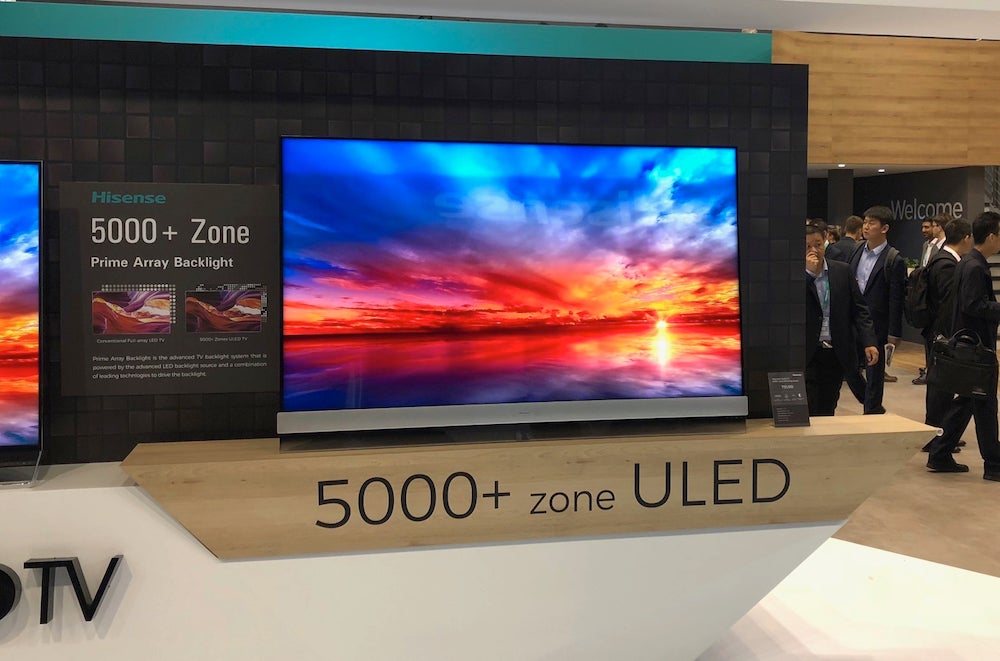 The 75U9D’s 4K images looked comfortably more detailed than those of the 75U9A sat beside it, presumably because of improved processing, better contrast, or a combination of the two. Couple this sharpness with the extended contrast range, and pictures enjoy an impressive sense of depth, too.

There are other areas where the 75U9D looked less impressive, however. Its screen seemed rather reflective, for instance. Also, judder throughout Hisense’s IFA demo reel was horrendous, miles worse than that of the 75U9A sat beside it. So much so that I can only imagine that there was a software bug in either the demonstration screen or the source feeding it.

Assuming this judder issue is sorted before (and if) the TV is released later this year/early next year, however, the 75U9D easily looks set to be Hisense’s strongest performing TV yet.

Let’s just hope that the price for getting so many dimming zones doesn’t turn out to be too eye-wateringly high.