With a new PvE element, massively multiplayer trading card game Hex: Shards of Fate is looking for a mainstream audience.

If you’re already aware of the existence of Hex: Shards of Fate, it’s pretty safe to say you would describe yourself as – there’s no other way to put this – a bit of a geek. After a notably successful Kickstarter campaign, which raised over $2 million, the game that has been hailed as the first Massively Multiplayer Online Trading Card Game (MMOTCG) has been available to play for  while, weathering litigation from Wizards of the Coast – claiming it was a mere clone of Magic: The Gathering – in the process. But it has remained well below the mainstream radar, finding a constituency exclusively confined to connoisseurs of TCGs.

However, that – publisher Gameforge fervently believes – is all about to change, and Hex: Shards of Fate may just have a shot at the sort of big-time appeal enjoyed by the likes of Hearthstone. That’s because a major update has just brought a Player versus Environment (PvE) element to the game – previously it has only supported Player versus Player (PvP) play.

Gameforge reckons that the arrival of PvE – essentially a string of dungeons that let players learn the essentials of Hex: Shards of Fate, such as how to build decks of cards, and the strategic subtleties that the game demands – will give players who aren’t already obsessed with TCGs an entry point. Gameforge’s thinking seems sound: currently, with only PvP on offer, there’s every chance that you’ll find yourself taking on a seasoned player before you’ve learned the most basic of ropes. 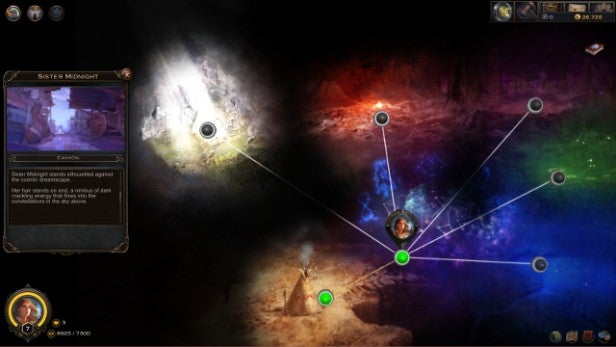 Thanks to the new PvE campaign, Hex: Shards of Fate has become a game which very effectively blurs the boundaries between trading card game and RPG. We got stuck into the campaign from its beginning, and indeed the gameplay, while clearly sticking to the conventions of card games (and looking like a card game), also had the feel of an RPG.

The first thing to do was to choose between the two factions on offer: Ardent and Underworld. The former, naturally, were the good-guys, and both have different special abilities which lead to fundamentally different play-styles (Underworld champions, for example, are good at shifting abilities around between cards, so are more difficult to second-guess). Then there were four races for each faction to choose between, and six classes, including cleric, warlock, ranger and mage. We opted for an Ardent human cleric. Perhaps the coolest race is the Underworld Vennen, who are orcs mutated in a spiderish manner.

Then we were confronted by a map, allowing us to have conversations (in a very old-school, text-based manner) with characters we met, thereby taking on quests. Gameforge explained that such conversations do have some influence on the game, as far as your route through the world is concerned; at various points, for example, in the more complex dungeons, you can decide which route to take, which opens up the possibility of avoiding some battles as you make your way through. 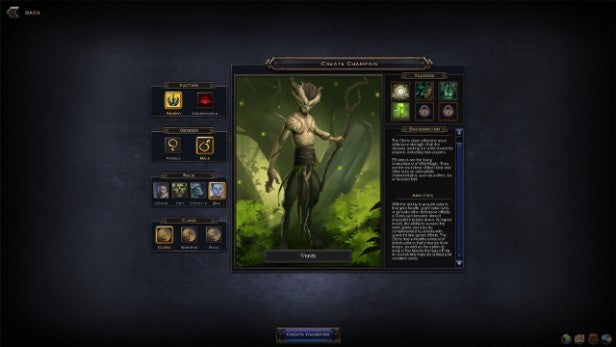 Then it was simply a case of making your way to dungeons and battling the champions within. As a champion yourself, you get to bring units from your deck of cards into play, so battles are often pretty long, and always tactical and involving; the enemy champion chooses when to block or instruct troops to attack.

If you aren’t happy with the cards you draw, you can redraw a number of times, but every time you do so, you lose one card from your hand – so that’s the first tactical decision you have to make. The best hands involve a mix of units and resources – there are two types of resource for each faction, and the more powerful cards require more resources, so the initial battle-phase involves getting resources onto the board.

Soon, though, you can start bringing units into play, and there are a few key strategies. For example, it’s crucial to distinguish between flying and grounded units, as flying ones can’t be blocked by ground-based ones, so getting flying units ready (and sometimes sacrificing other units to keep them in play) to set up a blitz on your enemy champion’s hit-points is a good way to play. You also have champion abilities that become available every few rounds or so – since we were playing as a cleric, these brought so-called Blessing cards, adding resources and hit points. 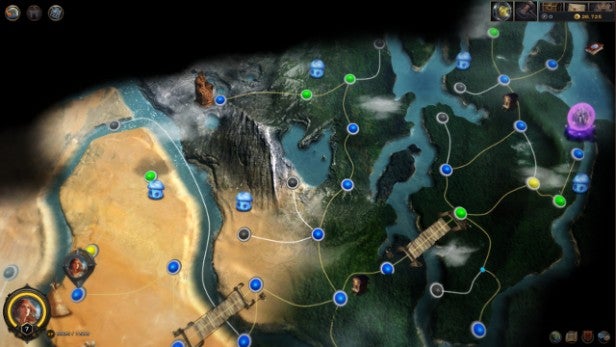 Moving onto a later dungeon encounter with a levelled up character, we were able to discern further depth in the gameplay. When Underworld enemies began shifting abilities between soldiers, bluff and double-bluff really came into play, and we started to encounter units that regenerated their champion’s health when they caused damage – it was vital to keep them out of the fray as much as possible. Rounds involving manoeuvring rather than attacks became much more prevalent.

The levelling up process in Hex: Shards of Fate felt pretty typical for an RPG, with a Skills tree, a card manager and Race Traits. Gameforge explained that every new area of the PvE side of the game which arrives (and there are plans for regular DLC drops) will increase the level-cap and open up a new, additional Skills tree.

First Impressions
Overall, Hex: Shards of Fate is very impressive. It may look like a trading card game, and employ TCG conventions, but it feels like an RPG. And now that it has a PvE element, general punters have a clearly defined path into it – they can learn its subtleties and complexities in a leisurely manner, before launching into the crucible that is PvP. It certainly makes the likes of Hearthstone feel like child’s play. If that sounds appealing, Hex: Shards of Fate is free to download for the PC (although you can expect to expend plenty of money on exotic cards if you get sucked into the upper echelons of the PvP), and the PvE is now up and running, so why not give it a shot?