iPads and iPhones can do a whole lot, given how much they rely on a simple touchscreen and very limited connectivity. But rob them of a Wi-Fi and 3G connection and they start looking much less impressive. However, for out-and-about iPads in particular, this is a pretty common situation. These moments are what the Hauppauge myTV 2GO is all about. It’s a Freeview TV transmitter that creates its own Wi-Fi network to pipe telly programmes over to your phone or tablet, without needing an internet connection. 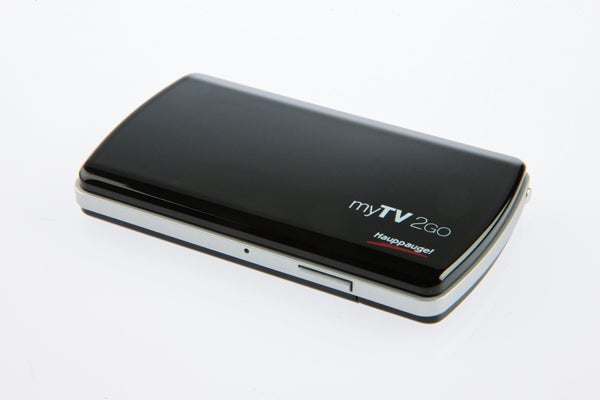 A metallic finish strip runs along its edges in iPhone 4-like fashion, but this is plastic too. There’s not much luxury to the myTV 2GO, but it does feel pretty tough and well-made. It should happily survive a sad life at the bottom of a rucksack.

The cleverest part of the design is the 15cm retractable aerial, the only hint of real metal on the device’s outside. It folds away into a neat little hole, and while telescopic, its thin end is that closest to the body – the “fat” part at its end. This aerial is designed to be highly flexible, and can withstand a fair amount of pressure before warping or snapping. Its hinge is also strong enough to keep the aerial pointed in a specific direction without sagging.

On the bottom of the Hauppauge myTV 2GO is a large plastic battery cover that houses the phone-like 1050mAh battery. This provides around 3.5 hours of TV-watching and is charged over USB. A flap on its side hides the miniUSB slot. 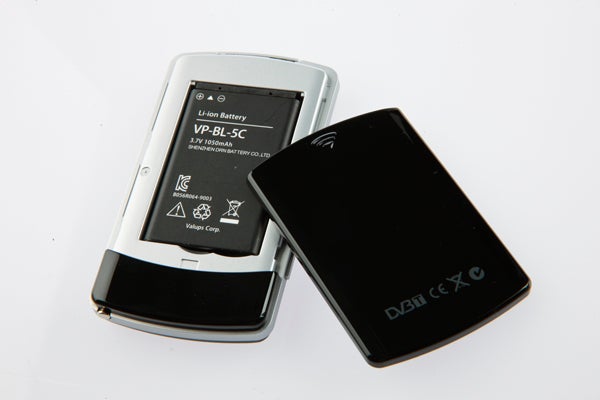 Its hardware is remarkably similar to the Humax Tivizen DVB-T, leading us to believe they may be re-branded versions of the same Far-East-made component – the Valups Tivit. They even share the same trio of colourful LED indicators on the front that tell you the battery, Wi-Fi status and signal strength. However, neat hardware like this can so often be unwound by rubbish software.

The setup process here is just the same, though. It relies on the use of an app – available for free from the App Store – based around the Fuugo software. Boot this up for the first time and you’ll be prompted to head over to the Wi-Fi menu of your iOS device, to select the network the Hauppauge myTV2Go creates to transmit the television broadcast. 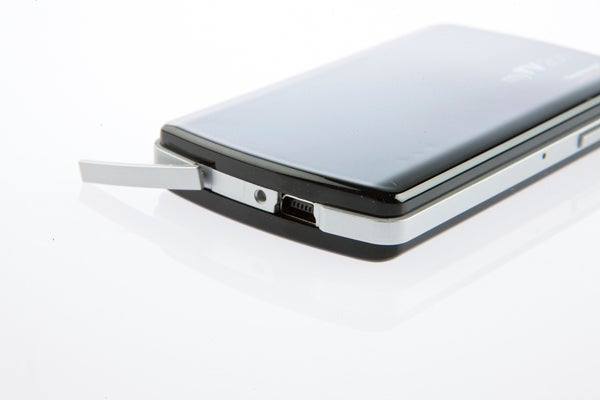 Once sync’d up, you can tell the box to automatically scan through the DVB-T signal for radio and television channels. There’s no support for HD channels, but we were able to pick up just about every other Freeview TV and radio channel available in not-all-that-sunny Wimbledon. It works with Macs and PCs too, not just iOS devices.

Those in less-than-perfect signal areas should think carefully before buying the Hauppauge MyTV 2GO DVT-B TV transmitter, though. The small 15cm aerial performs well for its size, but it can’t muster the signal stability of a larger standalone aerial or – of course – a proper outside setup. There’s no port to connect an external aerial here, either.

It doesn’t cope too well with being moved, causing break-up of the picture, but in its favour the MyTV 2GO’s small size and easily-adjustable aerial make it easy to fit into small spaces. You could even attach it to a wall with a big bob of Blu-tac, as it’s so light. 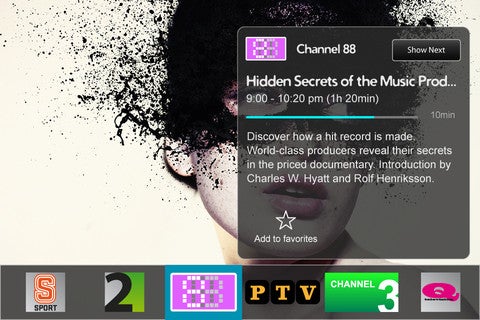 The Fuugo software lets you flick through the channel selection pretty quickly, each popping up within a scrolling menu at the bottom of the TV-viewing screen. There’s also the standard EPG view, but there is just viewing of “now and next” rather than a full 7-day showing – a bit disappointing.

The Hauppauge MyTV 2GO quickly gives you the impression that it’s all about quickie casual TV viewing, not offering any good way to plan your viewing within the app itself. Given this casual style, its recording capabilities are surprisingly diverse. Again, there’s no times recording options – which you’d need a 7-day EPG for anyway – but you can record multiple channels at the same time as long as they’re on the same multiplex. Freeview is broadcast on six multiplexes, each carrying a handful of channels.

Software management of this multi-recoding function is so lax that we were able to carry on adding channels until the test iPad almost went into meltdown – the MyTV 2GO will happily go on recording until the internal memory has been sucked completely dry. Recordings are kept in their own section, complete with the programme name, its date and synopsis, and you can easily delete them within a tap or two.  Not too shabby. 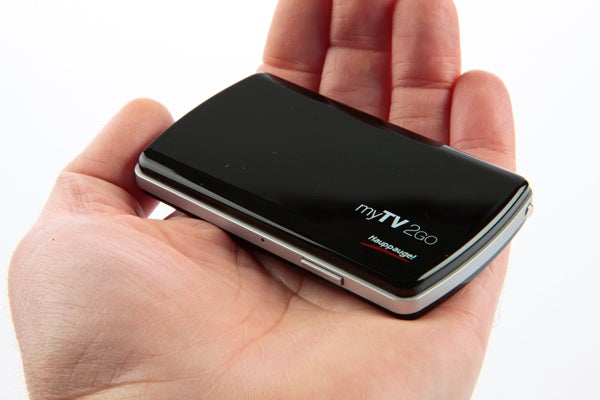 However, software is the weak point of the Hauppauge MyTV 2GO. It doesn’t do much to optimise the Freeview picture, which can look a little ropey on the relatively high-res iPad screen in lower bit-rate channels, and not having the full EPG feels limiting.

The imperfect software is enough to make us favour using an online TV streaming service like BBC iPlayer when in range of a decent Wi-Fi connection. As long as bandwidth is high enough, it’ll often reap a better picture too. That’s not what the Hauppauge MyTV 2GO is about, though. This little box can get you Eastenders while you’re half-way up a hill in the middle of nowhere – as long as the area’s Freeview signal is good enough. Unfortunately, it’s also around £20 more expensive than the near-identical Humax Tivizen DVB-T.

Now that so much television content is available to stream online, the audience for the Hauppauge MyTV 2GO isn’t going to be huge. But if you find yourself frequently without a connection, and in need of entertainment, it’s a neat and reasonably versatile solution. The EPG is limited, but it will record and picks-up both radio and TV channels.