The iPad has become such an intrinsic part of our lives that soon we won’t be able to go to the toilet or wash the dishes without one. Arguably its most exciting application is within the world of home cinema, where big name manufacturers are bending over backwards to incorporate iPad and Android functionality into their products. Panasonic is working on Blu-ray/HDD recorders that can zap live Freeview pictures to a tablet via Wi-Fi, while tablets and smartphones are increasingly being used in place of traditional remote handsets.

Now Humax is after a piece of the iPad action. The Tivizen DVB-T is a dinky device that allows you to watch Freeview TV channels on your iPad, iPhone or Android device while you’re out and about. If you’re on the train or in a café and simply can’t live without your daily dose of Dominic Littlewood, the Humax Tivizen DVB-T will zap his consumer-championing exploits straight to your tablet.

At 52(w) x 92(h) x 12(d)mm, the device is about the same size as your average mobile phone and will therefore slip in your bag or pocket easily. It’s very light (about 70g) and is dressed in an eye-catching gloss black finish that gives it a classy demeanour, plus build quality is pleasing.

Tucked into the top is a 15cm retractable antenna for picking up the Freeview signal, while at the other end is a mini USB B type port, which allows you to charge the removable lithium ion battery from a PC or USB mains adapter. It takes about 3 hours to fully recharge the battery from empty and lasts for about 3.5 hours.

On the front of the device you’ll find three LEDs, indicating the operation, battery and Wi-Fi status (they change colour or blink when there’s something happening), plus the power button is placed on the side.

Tivizen DVB-T uses the 802.11b/g Wi-Fi standards, and is compatible with the iPhone (4S, 4, 3GS), iPod touch (4G, 3G), iPad and Android devices (OS 3.1 onwards). The built-In tuner allows you to watch digital TV in other countries that use DVB-T, such as Austria, France, Germany, Spain and Italy.

The Tivizen DVB-T creates its own Wi-Fi network, to which you connect your device without the need for any passwords or complex configuration. You’re not at the mercy of a Wi-Fi router, which is why you can watch TV wherever you are – the two devices only need to talk to each other. DVB-T coverage is the only limiting factor.

It delivers TV via Humax’s free app available through Apple’s App store. There’s also an Android app which is currently still in beta.

The setup procedure is simple – install the app on your tablet, power up the device then delve into your tablet’s Wi-Fi settings and select the ‘Tivizen DVB-T’ option that appears in the list of connections. The two devices are then paired quickly and easily. 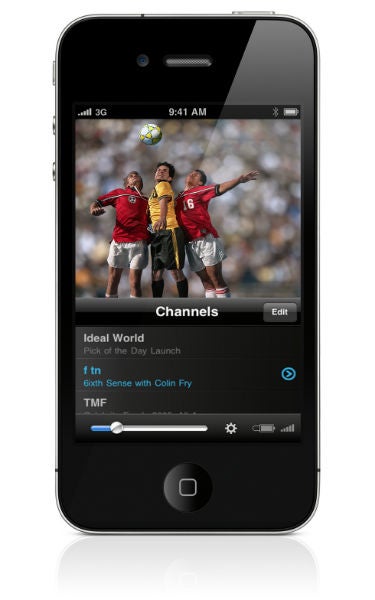 After launching the app, select your country and scan for channels, which appear as a list at the bottom of the screen, superimposed over live TV. The order of the channels can be changed, plus you can delete ones you don’t want.

Tapping one of the channels in the list switches to that channel. Under each channel it gives the name of the current programme, with a blue circle on the right – tap that and you get a description. We love the clarity and simplicity of the interface – yes it’s limited, but for on-the-go TV viewing anything more complex isn’t really necessary.

Tapping the live TV screen switches to full screen mode, and if you rotate the iPad the screen rotates too, preserving the correct aspect ratio.

It wasn’t all plain sailing during our test. After several unsuccessful attempts to scan for channels in one part of the house, we had a walk round and eventually it played ball in one specific spot. And when it did scan, it only found the BBC’s TV and radio channels, plus the EPG programme descriptions disappeared after the live TV picture popped up – all of this in a region (near Exeter) that has decent Freeview coverage.

But when we went outside with the Humax and iPad, we achieved more stable results. Clearly your enjoyment of the Tivizen DVB-T depends greatly on signal strength, which could be affected by a number of external factors such as nearby buildings and local interference. But it does throw up questions over the sensitivity of the tuner, as in the past we’ve had more joy from other digital TV devices.

With the channels we were able to access, the Tivizen DVB-T delivers a very pleasing picture performance. Blown up to full screen on our iPad 2, the image is bold, with pleasing levels of detail and natural looking colours.

It’s not completely artefact-free though, with some feathering around the edges of moving objects, particularly when the screen is packed with detail, but we’ve grown used to this from DVB-T broadcasts and doesn’t greatly mar your viewing pleasure.

If you’re a commuter looking for iPad-based entertainment on the train, or you like the idea of watching TV in the garden, the Humax Tivizen DVB-T is a very appealing device. It’s small enough to slip in your pocket and hooks up to devices easily using its own no-nonsense Wi-Fi network. The TV interface and functionality are basic but that’s a blessing when you’re out and about and want quick direct access to Freeview.

Our only concern is over the sensitivity and reliability of the built-in Freeview tuner, which didn’t always play ball for us, but given a strong signal the Tivizen DVB-T is a superb way of watching TV on the move.