We’re returning today to the test trilogy of crazily cheap 32in TV we kicked off a couple of weeks back with the Kogan 32XXXYA, wrapping the three-way comparison up with the AD32UMMB from Taiwanese brand Hannspree. And really there’s only one question to ask of this set: can it possibly challenge the mighty Finlux 32F8030-T for the current budget TV throne?

It gets off to a promising start, at any rate, as its measly £200 asking price makes it a cool £100 cheaper than the Finlux. It also looks sleeker than its Finlux rival, thanks to its employment of a much more slender black bezel that wouldn’t look out of place wrapped around a much more expensive TV.

The set’s slenderness does not extend, it must be said, to the AD32UMMB’s rear, which sticks out far more than those of most more ‘premium’ TVs. But as we often point out, under normal circumstances you don’t generally spend much time looking at a TV’s backside! 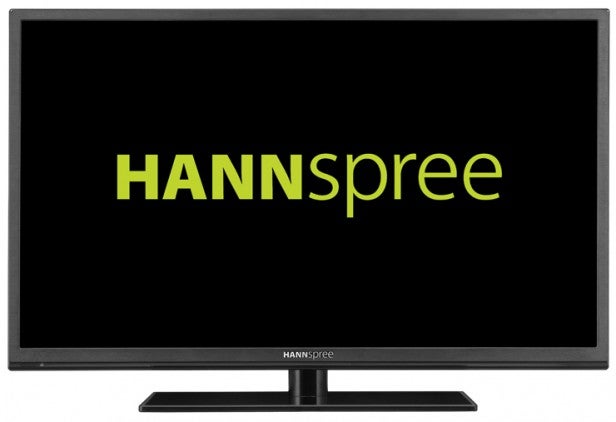 The AD32UMMB’s connections are adequate for such a cheap TV. Three HDMIs get the ball rolling, while multimedia fans can use a USB port to play back video, photo and music files or connect a PC via a provided D-Sub PC port. The USB can also be used for timeshifting programmes from the built-in tuner. However, please note that the set doesn’t carry any network support, be it Wi-Fi or wired, so there’s no DLNA streaming or online features (unlike the Finlux model).

More alarmingly, the lack of any network support also alerts us to the fact that the AD32UMMB doesn’t have an HD tuner; it’s standard def Freeview only. Actually, the missing LAN support isn’t the only clue to there being no Freeview HD tuner, for the screen also turns out not to have a full HD pixel count. Instead it’s just 1366×768.

This might alarm some, and it’s certainly not ideal. However, we have seen 1366×768 screens deliver plenty of clarity and detail before, and the slight reduction in resolution versus full HD screens is likely to be less noticeable on a relatively small screen like this 32in one.

The remote control you get with the AD32UMMB is pretty uninspiring. It’s plasticky and lightweight, and its layout is too bog-standard to be really helpful. The best that can be said about it is that its buttons are passably responsive, enabling it to interface quite satisfactorily with the surprisingly serious-looking onscreen menus.

In truth there aren’t as many interesting features within these menus as it initially looks like there’s going to be. For instance, the ‘Advanced Video’ submenu actually only contains noise reduction and light sensor options, not the colour and gamma fine tuning systems we might have hoped for. The only useful trick, really, aside from the aforementioned noise reduction system, is the facility to turn on or off an active backlight system. Not all budget TVs have one of these latter features, but they’re often invaluable when it comes to producing a convincing black level response.