What is the Haier Codo?

The Haier Codo may well be the world’s first portable powered stain remover. The idea is that you keep this gadget in your bag, car or office, to tackle any emergency spillages on clothes. The Codo’s pulsating head and water injection literally pushes stains clean out of fabrics. That Starbucks’ Latte down the shirt incident should never be a social howler again.

It works amazingly well too. It’s very effective at getting rid of common fresh spill stains and even blood with ease. Add a dob of liquid detergent and it does a grand job of dried-on stains as well, making it quite the gadget for the home too. 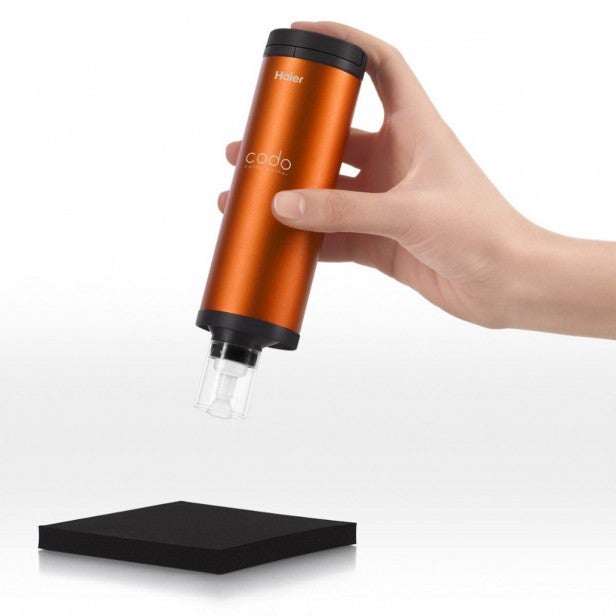 Haier Codo – How does it work?

Haier calls the Codo a pocket washing machine, which if nothing else conjured up all sorts of wonderful mental images before an early sample arrived. Its official UK debut is late summer 2017.

It would be far more accurate to call the Codo a portable stain remover – so we will. Its compact hand-held size certainly isn’t going to handle one of our typical 6-7kg full washing loads. In fact, it’s designed to be used on single stains, on single garments, on the hoof. 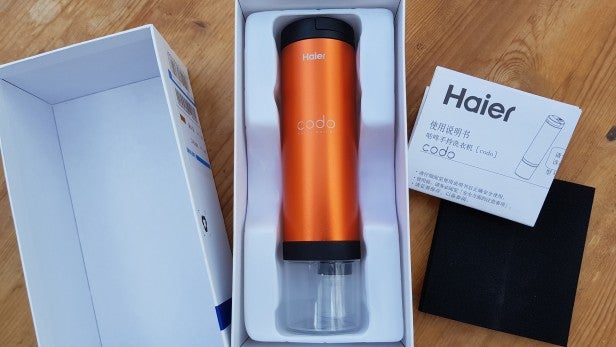 Think of all those times you managed to get cappuccino on your chinos, sauce on your shirt, beetroot on your blouse or gravy on your, um, garter. We’ve all done it, usually before an important meeting or an interview. Enter the Haier Codo.

The gadget is already a huge success where it was first launched in India – a nation with a far greater selection of colourful food stains than most. We abandoned trying to decipher the Chinese user manual on our imported sample in favour of Haier India’s YouTube instructional video.

Insert three AAA batteries, fill the vial with water and place a few layers of something absorbent on the foam pad (kitchen towel, loo roll – whatever is handy). You then place the offending garment stain-side down on your absorbent foam stack. 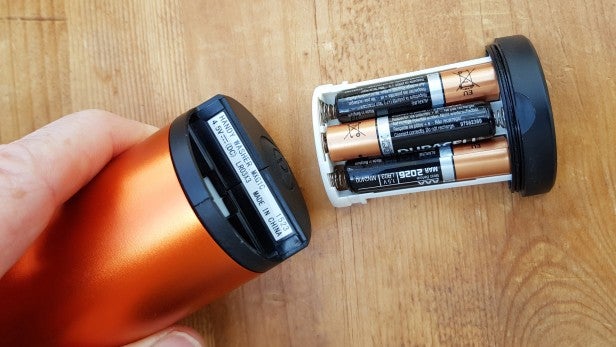 Switch on the Codo and the knocking head vibrates back and forth, squeezing out a tiny bit of water when it’s nose-down on the material. You work the head over the stain from the outside edges to the centre to stop the stain spreading as it moistens. The foam pad soaks up the vibration while the absorbent cloth soaks up the water and stain.

A small blob will take less than 30 seconds to go over a few times, although for larger spills you’ll need to keep replacing the absorbent layer as it gets damp. Very little water is used, so the area of the clothing affected is only a little moist after treatment. 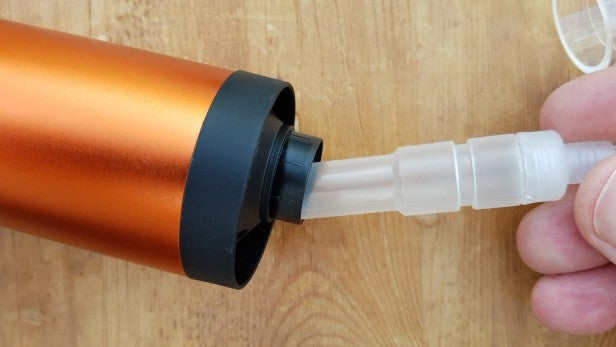 If you have a stain in the right place and some room under your clothes for getting the pad, you could potentially do a spot-clean without getting your kit off. Yet the Codo works best if you attack the stain from the reverse side. That might mean nipping into the motorway services or office facilities and getting your clothes off – but at least you won’t get a reputation as the KFC King or the Quesadilla Queen.

If the stain is really tough and/or dried on, you can also use the Codo with the help of some liquid washing detergent. Just blob a little detergent on the stain and let it soak in for a minute before turning it over and using the Codo from the rear of the material as normal. 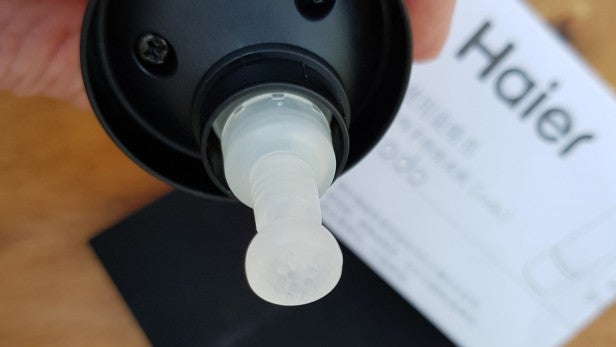 Haier Codo – How well does it clean?

Having seen the very low price for which you can buy this devices online, we weren’t overly confident in the Codo meeting any of its stain-banishing promises.

Yet in an immediate, stain-killing sweep that caused some unpublishable expletives of amazement at the test centre (and disapproving looks from the dogs), the Codo is quite remarkably good.

We started with blood on white cotton to give the CODO a real challenge – the stain all but disappeared before our eyes. 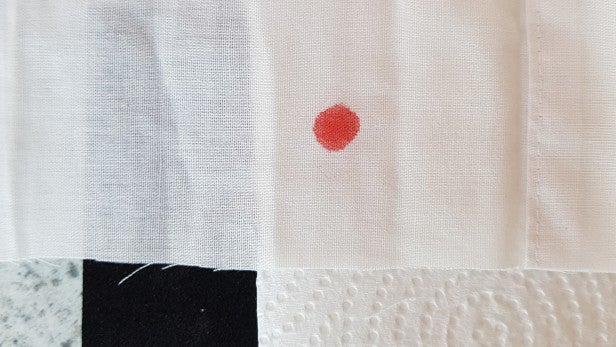 The vivid red stain did spread out initially, but that was largely our fault for going straight onto the stain rather than working from the outside edge inwards. Even so, by continuing around the whole area and replacing the kitchen towel layer to keep the moisture absorbing, the stain was gone in 60 seconds. Blimey. 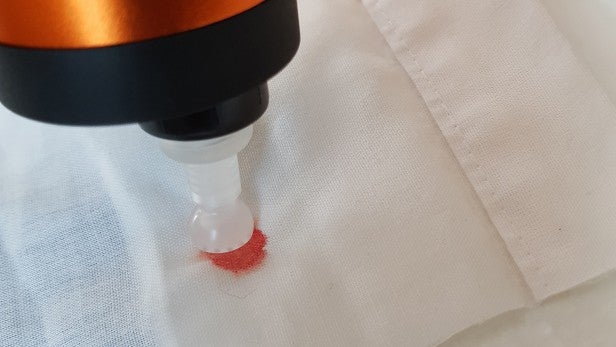 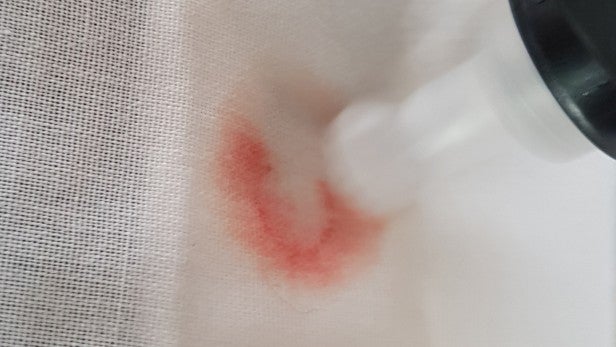 Looking closely at the white fabric once it had dried, it was almost impossible to see where the initial stain had been. Looking very closely you could see the faintest slightly darker area where the stain spread when it became moist. Thankfully, that simply wasn’t visible if you weren’t looking for it. 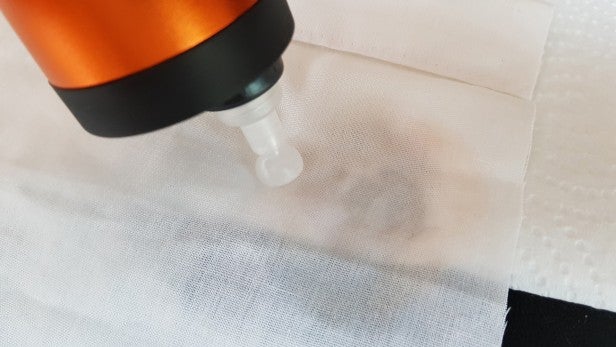 The more stains we tried and the better we got at using the Codo, we managed to achieve really clean results without so much as an after shadow. The trick is to work out-to-in and keep changing the absorbent towel so the stain itself is absorbed away from the material. Our usual stain fares of blood, coffee, juice and ketchup all disappeared with ease using water alone. 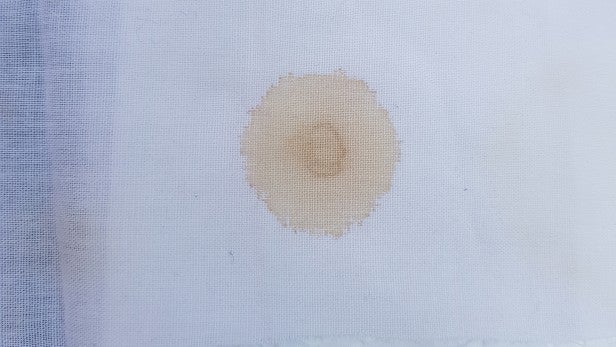 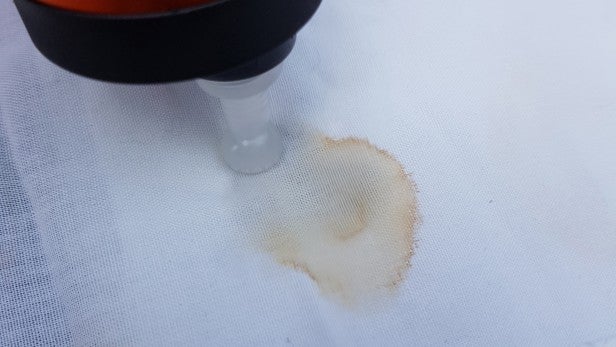 We repeated the test using a blob of biological liquid detergent on the top of the stain and letting it soak in for a bit. While removing both dried stains and the detergent certainly took a little more work with the CODO than on fresh stains, the results were excellent. In both cases, the white cloth came up very clean indeed, with no signs of the original mess.

Having tested the little gadget on several common stains over the course of a week, we never failed to be impressed by the results. On very large stained area we did sometimes get a feint shadow remaining, but rarely enough to see without scrutiny. 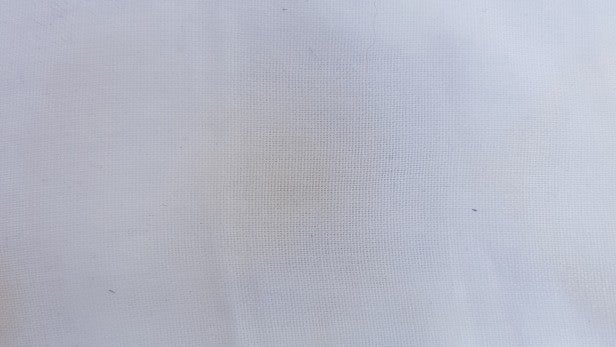 We could complain that the Codo isn’t rechargeable and you need old-school batteries. Yet Jackie noted, if you leave any rechargeable gadget in your car glove box long enough, they’re bound to be flat when you really need them. Standard batteries hold their charge much longer when not being used. Moreover, you could always keep spare AAA batteries in the car/office or pick up a fresh set at the services. It seems even what we thought was a minor issue was actually a practical positive. 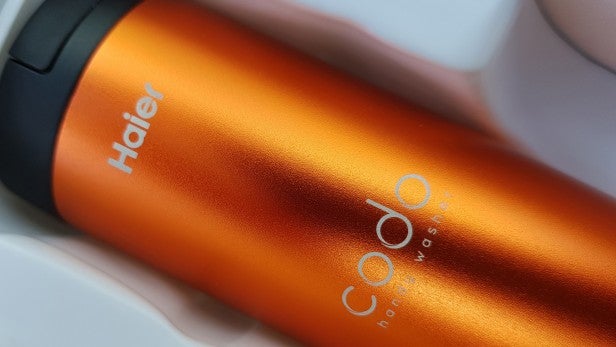 Should I buy the Haier Codo?

For instantly addressing stains on the go, more difficult stains at home with detergent, or even pre-cleaning really tough stains before you put them in a proper wash, Haier’s Codo is a star performer.

Its knocking head and water injecting take a little practice, but the result is near miraculous stain removal in seconds. This makes it the must-buy gadget for anyone who’s ever had a food-mouth targeting issue. Let’s face it, that’s all of us.

An incredibly effective gadget that will eliminate most common spill stains from clothes in seconds.