Grow Up’s biggest problem is that it only exists because Grow Home was a hit that nobody expected, Ubisoft included. With the game performing as well it did, a sequel was a must, even though it probably never existed in the original plans.

Trying to capture lightning in a bottle twice isn’t easy, however, and this is where Grow Up struggles most. Returning to a familiar format – you’ll be controlling the loveable robot B.U.D. in its attempts to reassemble broken ship ‘M.O.M.’ – your main aim is to simply explore the world and discover abilities, parts and secrets along the way.

In order to separate it from its predecessor, though, Ubisoft’s main design decision has been to make everything bigger. So not only is the world you find yourself in larger, but there’s more to do, including 40 challenges, as well as collecting items linked to the end game.

That was never going to work without some adjustments, which is why you now have access to P.O.D., an airborne best friend that gives a bird’s-eye view of the entire map. It’s necessary in order to stop things becoming too overwhelming, and it allows you to pinpoint specific areas of interest. There’s far less guessing this time around, with the focus more on the sheer amount of things you can do.

In theory, there’s nothing wrong with this. Grow Up retains the same charm and sense of wonder of its predecessor. Setting out as a vulnerable robot into the unknown feels as vast as it did before, and those who just needed an expansion to Grow Home will be more than satisfied. There’s a very strong impression that this has been made with such folk in mind. 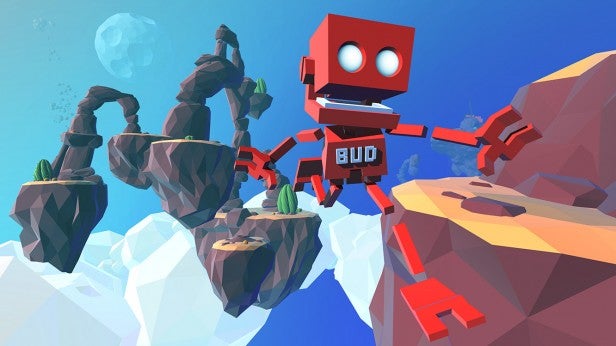 Because of that, the same appeals, and issues, remain. B.U.D. controls like a drunk uncle at Christmas and it’s as much about understanding how to move him around as it is trying to reach the sky. It’s certainly not a difficult challenge, but those who’d rather do nothing more than push forward on the right analogue stick may never get to grips with how everything comes together, even though it really is just a matter of timing.

This intensifies when it’s time to climb – something you can expect to do often. B.U.D. can tackle most surfaces, but it’s up to you to take charge of both his left and right arms. While it quickly becomes commonplace and there’s a certain satisfaction to it, it’s not far removed from what the first game introduced. In fact, it’s basically the same thing.

It’s here, however, where the tandem between B.U.D. and P.O.D. comes into its own. While you steer P.O.D. to survey the area from the skies, B.U.D. is on hand to climb over all sorts of terrain to actually obtain what P.O.D. spots. To ensure things don’t get too boring, Ubisoft has also included a host of power-ups. There’s a jetpack, a parachute of sorts to slow you down when falling, a bizarre ball that you can hurl about in, a glider and all manner of gizmos to help you get around.

They’ve been introduced in order to make getting where you need to be – an all too frequent issue back in 2015 – less of a pain. While it’s definitely a welcome addition, it does make Grow Up a hell of a lot easier and almost extinguishes any tension that comes from painstakingly making your way up a giant mountain. If you fall, there’s usually a way to stop yourself.

Ubisoft has also seen fit to include something known as the Floradex. A bizarre system that allows you to take a sample of any plant life you come across before giving you the resources to then grow a replica at the push of a button, it’s utterly pointless. Almost 100% of the time you’ll come across these naturally, and while their abilities are always handy – one acts as a trampoline, for example – it’s a feature you’ll probably forget about before long. There’s just no need for it. 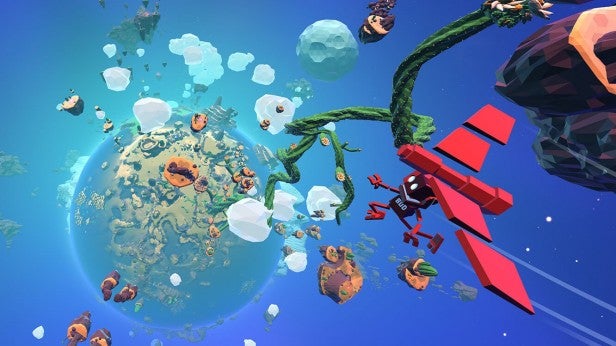 Grow Up is still a quirky, pleasant twist on what you may usually expect from a video game, but the nuts and bolts that have been screwed onto the sequel don’t really make for a more entertaining experience. Ubisoft deserves credit for always experimenting and supporting with indie-like titles such as this, but whether a sequel was entirely needed is up for debate.

Still, Grow Up remains cheap and cheerful, but surely spells the end of B.U.D.’s gaming reign. It was fun while it lasted, but it’s probably all that’s required.

Grow Up takes everything that made Grow Home so entertaining and adds to it accordingly, but the predictability of any sequel means it falls a little flatter than before.