Google Play Music All Access is a music streaming subscription service that is set to take on the likes of Spotify, Xbox Music, Sony Music Unlimited, Deezer and Apple’s soon to be released iTunes Radio.

Offering access to 18 million tracks and the ability to store 20,000 songs in Google’s cloud locker, All Access costs £9.99 a month and can be used on smartphones, tablets and via the web. You can trial the service free for 30 days and if you sign up before September 15th pay £7.99 a month instead.

There’s no ads, plenty of music (including the Beatles), and it’s cheaper than other music streaming services if you sign up now. It’s seen as the last piece of the Google Play puzzle, but does it really have what it takes to take on Spotify, Rdio and the rest? We put All Access to the test to find out. 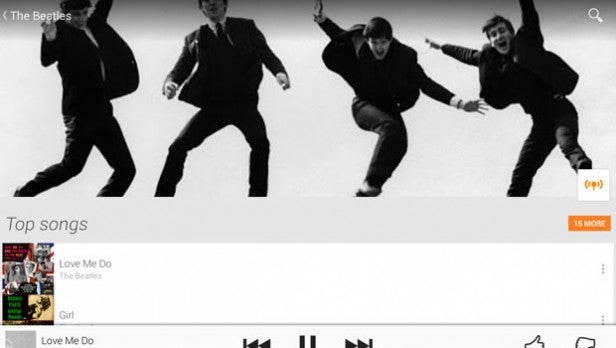 Google Music launched in the UK back in November 2012 offering users access to the iTunes Match-style scan and match service and cloud locker service for free. Now All Access unifies all of your music whether it’s discovering new artists, accessing your entire music library, listening to the personalized radio stations or simply making playlists.

The original Google Play Music application was a clunky and quite simplistic affair. In its latest guise Google has brought it in line with the rest of the Google Play departments. It looks cleaner, more user-friendly and it’s easy to identify music that exists on the device and in the cloud. The app UI is consistent across all devices although we did notice that the sidebar gets cut off. It doesn’t affect selecting the drop down menu, but it looks a little messy. 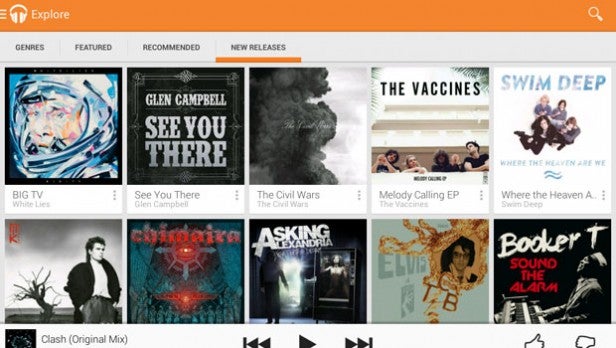 In terms of layout, you still have the sidebar on the left hand side, and the tiled-style content with big visible cover artwork. Up top is the search bar and customary three dot Settings drop down. Player functions sit at the bottom and a click on the cover art launches the full size player. Here you can choose to shuffle, repeat, skip tracks backwards and forwards, and give the track a thumbs up or down. Cover artwork slowly scrolls across the screen once the music is playing.

Some might prefer the predominantly white UI to the darker look on Spotify, but there is very little between the two in terms of intuitiveness. We are surprised that Google doesn’t offer the ability to customize the look of the player.

Google Music All Access is broken down into five categories. First up is ‘Listen Now’ where you can see all single tracks, albums, playlists and radio stations recently listened to all in one place. Then there’s ‘My Library’ where you’ll find songs uploaded from the Google Music desktop manager to the Google cloud locker plus any songs you’ve purchased from Google Play Music.

‘Playlists’ is where you find new playlists as well as ones created automatically from the most recent music added. ‘Radio’ follows the same principles of dedicated services like Pandora and Blinkbox Music. You get ad-free radio stations where you can skip tracks or go back to tracks that have already played. Last up is ‘Explore’ to discover new artists, music or playlists based on listening habits.

In terms of general settings, you can view account details, cancel your subscription, block explicit songs in radio mode and access the bog standard equalizer. In the Downloading settings, you can choose caching options for offline play and whether to download music over Wi-Fi. 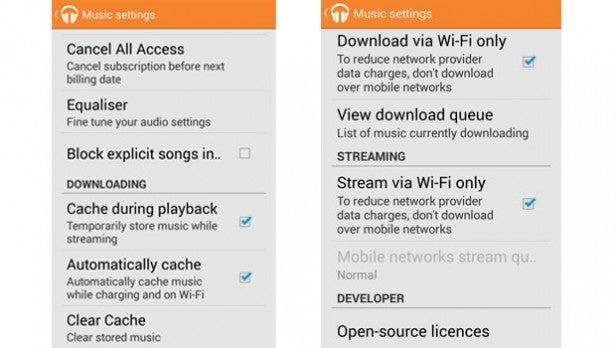 Google gives you access to 18 million tracks compared to Spotify’s reported 20 million strong catalogue and Xbox Music’s mammoth 30 million tracks. All Access also includes the back catalogue for artists who have previously avoided handing over music to streaming services. That includes the Beatles, Oasis, Pink Floyd and Radiohead.

Some other good news is that All Access can offer a maximum of 320kpbs sound quality. There’s Low, Normal and High stream qualities to choose from and this is adjusted depending on internet speed and the strength of the network connection. You can also cache tracks offline or ‘pin’ them to the device.

Some people enjoy telling friends on Facebook or Twitter what they are listening to by cluttering up their newsfeeds with updates. The good or bad news depending on how you feel about sharing music over social networks is that All Access only lets you do this via Google.

Google Play Music All Access is currently only available as an Android app and web app, so there’s no love for iOS users just yet. There are third party app ways around it, but it looks like iPhone and iPad users are going to have to live without it for now.