The Google Pixel Buds A-Series are a solid cheap true wireless pair. Their clear and detailed sound is not the most adventurous, but the design and features are solid and Google Assistant integration is excellent.

With each true wireless Google seems to be slowly improving its audio credentials. While the original Pixel Buds disappointed, the Pixel Buds (2020) improved matters to the point where we find ourselves anticipating the Pixel Buds A-Series with a degree of expectation.

While the new Pixel Buds haven’t shrunken much in size or features, they have in price. The A-Series strips the RRP down to an affordable $99/£99.

That takes them out the firing range of the more prestigious audio brands featured in out best true wireless guide, but the new price point is choc-a-block full of excellent options. How does the Google Pixel Buds A-Series fare in the more affordable isle?

The Pixel Buds A-Series carry on the same core design of the Pixel Buds 2: it’s a similar ovular case with a battery indicator on the front, USB-C connection on the bottom and pairing button on its back. There’s no LED indicator in the case, which seems to be the only noticeable deviation from before.

With stabilizer arc on each earbud, the Pixel Buds A-Series look a bit like a snail. Open the case and the Pixel Buds are nestled inside, the arc helps to pluck the earbuds out with relative ease.

They’re compact and lightweight, with each earbud about 5g and the case around 40g. The slot in the ear, though you’ll want to play around with the ear-tips supplied (S, L) for best fit. The default medium option was loose for me and jumping to the biggest size resolved that.

Google says the Pixel A-Series incorporates a hybrid design that uses spatial vents to ease the ‘plugged in’ feeling some associate with earbuds. The idea is the vents relieve pressure in the ear, while serving up enough passive isolation so external noises don’t distract but the wearer still has enough awareness of what’s around them.

It’s a delicate balance to tread and the Pixel Buds A-Series toe the line well enough. Loud noises permeate no matter what, but during walks the A-Series offered solid focus on music while filtering through what was around me. The uncomfortable ‘plugged in’ feeling is one I don’t experience, but nevertheless the Pixel Buds offer a comfortable fit. They stayed rooted, and though I always felt their presence, there was no sense of discomfort.

In terms of controls, taps and holds are responsive. There are occasions where you might miss the contact area (which is the Google logo), but controls are easy to remember, although there’s no onboard control for volume. Colour-wise there’s the option of ‘Clearly White’ and ‘Dark Olive’ (let’s call it green).

The most attractive feature of the Pixel Buds A-Series’ is its integration with Android. Flip the case open and they’ll fast pair to any Android 6.0+ device, with an instant look at the battery life of the earbuds and case.

Pairing for the first time prompts a download of the Pixel Buds app. What features it does have concern toggling on and off Adaptive Sound and in-ear detection (which in general works snappily), as well as enabling automatic firmware updates. Other options include a Find My Earbuds feature, tweaking Google Assistant settings and the ability to convert languages in real-time through Conversation Mode.

There’s no ability to customise controls – taps and holds are the same on either earbud – and altering the EQ concerns Bass Boost. While the app is rather basic, given the price, the appeal isn’t aimed at the audiophile listener.

Really, the Pixel Buds A-Series are about convenience and there’s plenty of it with Google Assistant. Interaction mirrors the Pixel Buds 2020 with a hold/long press calling her up and pausing music. When you hear a chime, you can pose a query. Let go and you’ll hear another chime before she answers your query and music resumes.

She’s prompt and informative, useful for simple queries (what’s the weather like?) or for getting directions where she’ll suggest the quickest route. I couldn’t get her to open any apps on my OnePlus smartphone though, she just read through my notifications instead.

Connectivity is Bluetooth 5.0 and Bluetooth codec would appear to be SBC and AAC, though I’m looking to get confirmation on that. Unlike the experience some had with the previous Google Pixel Buds, I’ve not had connection issues whether that be audio dropouts, stutter or lag. It’s been smooth with audio and videos so far.

They’re rated at IPX4 – the same as Pixel Buds 2 – and they’re a solid option for running and workouts. Haven taken them on a solitary run, the earbuds remained tucked in with the fins only slightly chafing against my ear. Nothing too uncomfortable and nothing a quick re-position couldn’t fix.

Google quotes a 5 hour battery for the Pixel Buds A-Series, which is fine if you’re not a heavy user. If you were listening just to music, I’d wager you could extract towards six hours. However, that figure risks looking small alongside true wireless pairs that approach ten hours on a single charge and well over 30+ in total.

So, 24 hours isn’t as much value as you’ll find elsewhere, and a quoted 2.5 hours of talk time is puny. Battery usage is fairly uniform so both earbuds drain at a similar rate, with fast-charging support included too (15-minutes for three hours). Wireless charging support has been dropped from the feature set.

I didn’t review the Pixel Buds 2020, but comparing my thoughts against the review, I’d say not much has changed in sound quality – and the drop in price makes that a little more palatable. It also helps to make the Pixel Buds A-Series one of the better-sounding cheaper wireless earbuds.

Clarity is at the core of the Pixel Buds A-Series’ approach. Instruments are well defined, and vocals are given priority irrespective of genre. The trap affordable earbuds can fall into is to aim for a crisp tone and hit sibilance or harshness. It’s a pitfall the A-Series avoids with its smooth presentation.

Dynamics are broadly described and not the most dramatic in pitch. Despite Google’s claims about how powerful the 12mm dynamic drivers are, there’s no pointed sense of attack or coursing energy drawn from House of Pain’s Jump Around or David Bowie’s Modern Love. They sound balanced in the sense that no part of the frequency range sticks out, but that doesn’t mean they couldn’t be a bit more distinctive.

One area is bass, which has presence and offers some variance (which is good), but lacks depth in Nas’ If I Ruled the World or Jay-Z’s Empire State of Mind. There a ‘Bass Boost’ option, and that serves fill out the sound more with H*A*M from Watch the Throne and give bass and upper-bass tones a solid footing. Would you toggle it on for all tracks? I don’t think it’s a cure-all, but at least the option is there.

I suppose the Pixel Buds A-Series bass response strives to not overplay its hand, but when it comes to their treble response they are dulled in Gogo Penguin’s Raven. It’s likely down to their smoothness, but that arguably robs them of some character, too.

The mid-range is where the Pixel Buds A-Series are happiest. It’s a clean, detailed and natural approach, and while vocals aren’t described with lashings of emotion, there’s clarity to female voices such as Gwen Stefani’s voice in Don’t Speak or En Vogue’s Don’t Let Go. Male vocals are treated well enough though Chris Cornell’s in Soundgarden’s Black Hole Sun did present some sibilance.

And there’s solid fidelity to how instruments, such as guitars and drums come across too. The mid-range is the strongest part of the A-Series’ delivery, and in some ways a step up over the one of the best affordable true wireless pairs in the Lypertek (Tevi) PurePlay Z3 I tested a few years back.

But in other areas they’re more modest. Without Bass Boost the sound is condensed in scale, so they lack presence, and the soundstage isn’t the widest either. Despite that, the soundstage isn’t cramped or cluttered thanks to their sense of clarity and detail. Turn up the volume and they lose the smoothness and traces of harshness appear, but that’s not unexpected.

The Google Pixel Buds A-Series reminds me of Tom Hanks in 90s films – they’re a true wireless for the “every man/woman”. Their character is consistent, almost relentlessly polite in tone – but unlike Tom Hanks, the A-series don’t put in an Academy Award-winning performance.

There’s a sense that Pixel Buds A-Series continue Google’s idea of what music should sound like and lack a sense of boldness and adventure. In that sense there will also be a ceiling to how good they can be.

Nevertheless, they satisfy with their features, design and audio enough to be a sound recommendation to Android owners looking for an affordable wireless earbud. 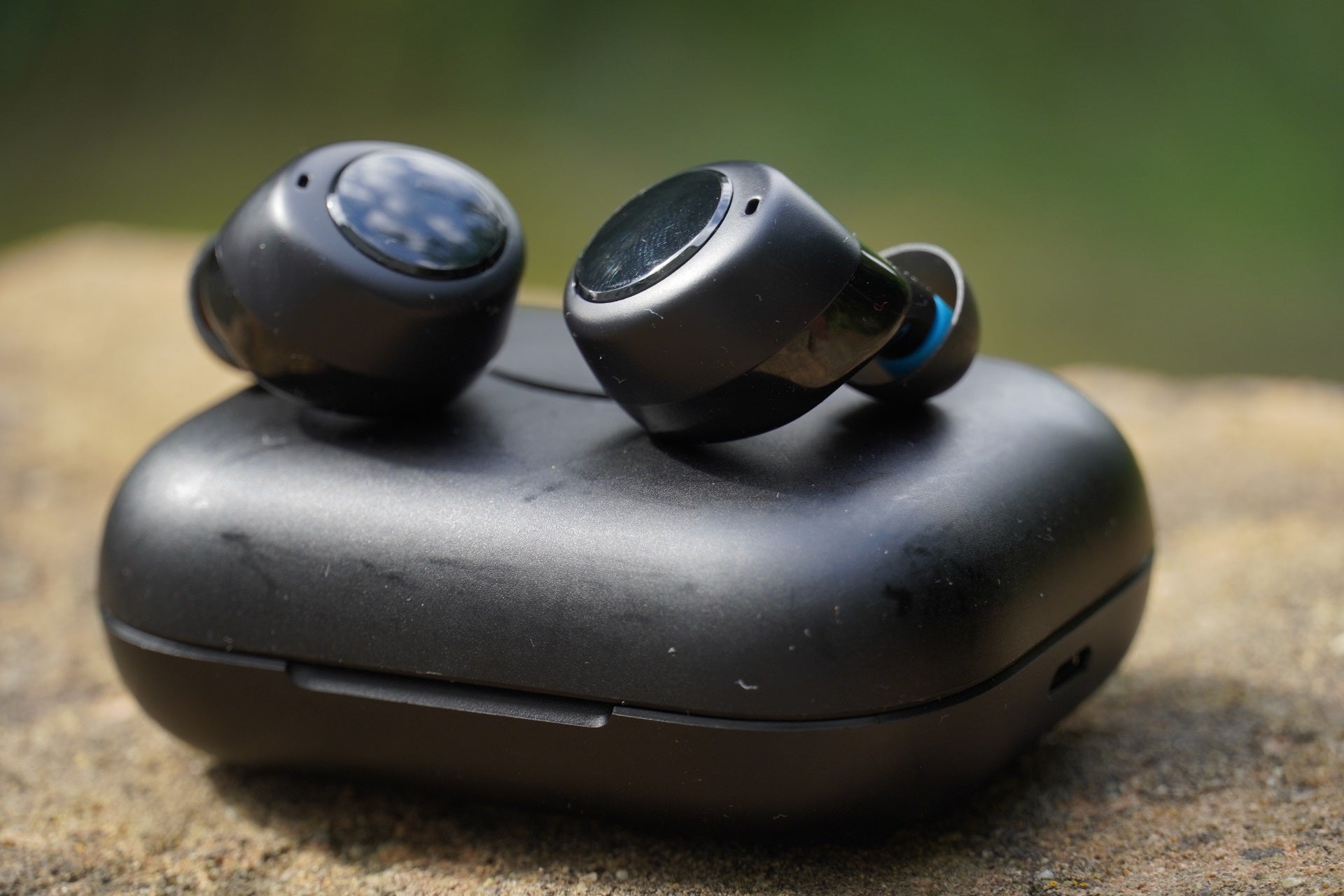 If you’re after cheap Android-focused earbuds: Given its Google, the integration with Android 6.0+ devices is core the Pixel Buds experience. It’s smooth, easy to use and Google Assistant is integrated well.

If you want more adventurous sound: The focus on clarity and detail does strip the A-Series of some character. Despite working satisfactory with a number of genres, they’re lacking in the excitement department.

The Google Pixel Buds A-Series are a solid cheap true wireless pair. Their clear and detailed sound is not the most adventurous you’ll ever hear, but the design and features are solid and Google Assistant integration is excellent.

Do the Google Pixel Buds A-Series have noise cancellation?

No, the Pixel Bus A-Series do not have active noise cancellation. They rely on a passive noise isolating design to shield the wearer from external sounds.

What battery life do the Google Pixel Buds A-Series have?

Are the Pixel Buds A-Series suitable for workouts?

We’d say so. The fit is good and the IPX4 rating is enough to dispel splashes of water and sweat.