The Gigabyte GA-E7AUM-DS2H is the first motherboard we’ve seen with Nvidia’s new GeForce 9400 chipset but we have seen something similar in recent times; the Asus P5N7A-VM. This model uses the GeForce 9300 chipset, which is identical in almost every respect. Both support a Core 2 processor, with a front side bus up to 1,333MHz, and 800MHz DDR2 memory but there is a modicum of difference in the graphics core. 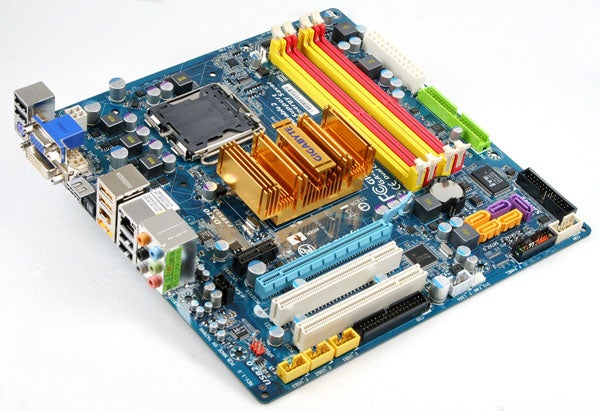 Both Asus and Gigabyte have opted for DDR2 and it doesn’t seem likely that there will be a DDR3 version any time soon so the memory speed will continue to be relatively slow. Gigabyte claims you can overclock the graphics to a heady 580MHz/1,800MHz with its Easy Tune 6 utility but we failed to get the software to do anything of the sort as any overclocking resulted in a frozen system.


The GA-E7AUM-DS2H is fundamentally similar to the Asus P5N7A-VM as both motherboards are Micro ATX designs with the latest integrated Nvidia graphics. Both models feature DVI-I, HDMI and VGA outputs for the graphics but the Asus distinguishes itself by including DisplayPort as well. This makes it the clear winner on that score but the GA-E7AUM-DS2H fights back with something more down to earth. It sports a Firewire port on the I/O panel along with a header for a second port, though the lack of brackets in the package make that second port less of a boon.

It’s the same story if you require extra USB ports should the six provided on the I/O panel prove inadequate. We cannot help but think that a bracket would have increased the options available to the customer.


The layout is very neat and manages to cram a host of features into a small space without making the board look too crowded although a couple of oddities did catch our eye. For one thing there are headers for Serial and Parallel ports however the necessary brackets are not supplied in the package and we doubt they are readily available. Besides which, the inclusion of legacy ports seems a bit odd anyway.

What does concern us more is the location of the five SATA connectors. If you install a humongous Radeon HD 4870 X2 – unlikely we know but bear with us – then all five SATA ports will be blocked. If you choose a more ”conventional” GeForce GTX 280 graphics card you’ll find that three SATA ports are covered, leaving two available for your hard drive and DVD drive.


The other annoyance is the four-pin ATX 12v connector, which is located at the top of the board between the CPU socket and the VGA output. There’s nothing wrong with this general location except that it is slap bang next to a large capacitor so you don’t have the option of using an eight-pin connector as the capacitor will get in the way. Provided your power supply has a four-pin 12V connector all will be well.


Installing Windows Vista on the Gigabyte was quick and easy but we found it impossible to decide whether Gigabyte had newer drivers on its website than the versions on the DVD. You can download chipset and VGA drivers from Gigabyte but the zipped files don’t have any version numbers so we installed the drivers on the DVD and then tried the updates to see whether anything changed. As the two files weigh in at a combined size of 150MB that’s a bit tedious so we are happy to report that chipset driver 20.08 and VGA driver 178.13 on the DVD look like they are up to date. 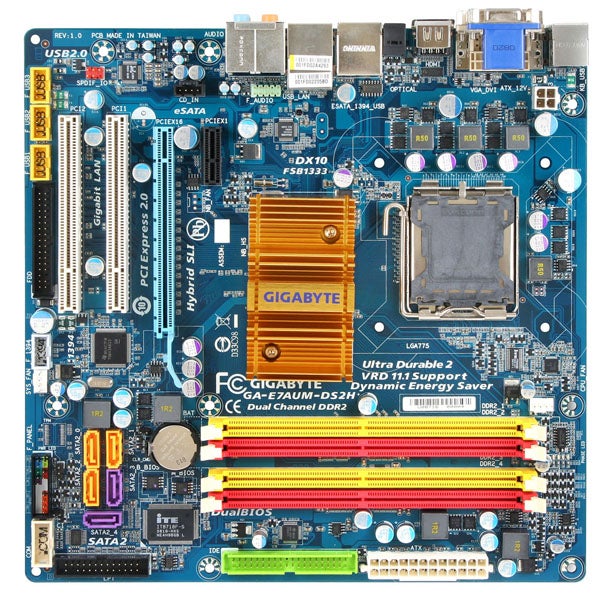 We tested the Gigabyte with a Core 2 Duo E8500 running at 3.16GHz along with 2GB of 800MHz memory and were impressed to see that the extra clock speed of the GeForce 9400 graphics gives some 30 percent advantage over GeForce 9300. That’s a big step up but even so the Gigabyte is a long way shy of being able to play Far Cry 2, for instance. This new first person shooter may not sound like a fair test of integrated graphics but the fact is that you can play Far Cry 2 very happily on a £100 Radeon HD 4830 and it’s not too bad on a £65 Radeon HD 4670. The problem is that GeForce 9400 is considerably faster than the baby brother 9300 but it’s still a long way shy of a proper gaming graphics which leaves a big ‘So what?’ hanging in the air.


The Gigabyte GA-E7AUM-DS2H is indeed relatively fast but it’s still not fast enough. The other problem is the price. The P5N7A-VM is on sale at £89 while the Gigabyte costs £113 which is a huge amount of money for faster integrated graphics. Asus deliberately choose the cheaper 9300 chip and MSI seems to have given both 9300 and 9400 a wide berth so Gigabyte has been brave in choosing the 9400 but it looks like a duff decision.


Gigabyte has delivered the fastest integrated graphics that money can buy. The trouble is we’re talking about a great deal of money that would be better spent on a budget graphics card.