In many respects the Nvidia GeForce 9300M chipset at the heart of this Asus P5N7A-VM motherboard is an utterly logical product as it combines the Core 2 processor with decent integrated graphics. Nvidia tried something similar with the GeForce 7000 series of chipsets which we saw when we reviewed the MSI P6NGM-FD and while the graphics were capable of movie playback they scored about 400 marks in 3DMark06 and weren’t up to the task of playing any game more demanding than FreeCell.

Nvidia’s next integrated graphics core was the GeForce 8300 which featured in the Asus M3N78 Pro. This was a far more impressive piece of silicon and scored 1,300 marks in 3DMark06 however it was allied to the Phenom processor and wasn’t available for Core 2. It may sound as though Nvidia took its eye off the ball as Phenom has very little appeal compared to Core 2 but it took pains to ensure that GeForce 8300 was slightly faster than the AMD 780G chipset. If you were building a Media Centre around an AMD processor you now had to make a choice between Nvidia and AMD graphics but surely Nvidia had the Core 2 IGP market all sown up? 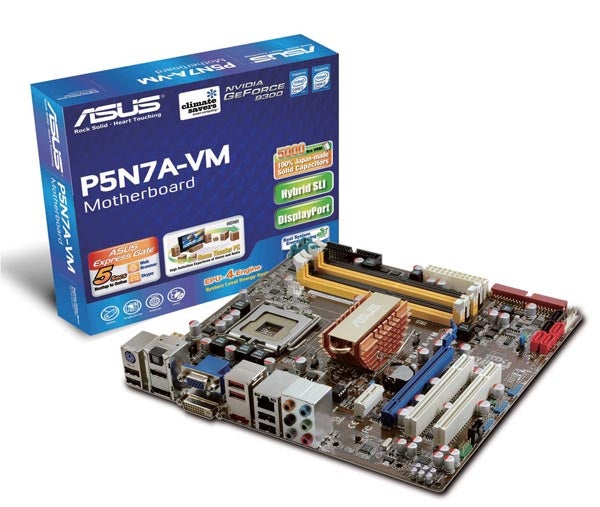 Intel’s G35 wasn’t much better than the G965 in terms of performance as both IGPs score about 600 marks in 3DMark06 but the G45 is a completely different proposition as we saw with the Intel DG45ID motherboard. G45 has decent digital outputs, proper movie playback and scores 1,200 in 3DMark06 so the time is clearly ripe for a new Nvidia chipset, and that time is now.

Nvidia has launched a pair of chipsets that are identical apart from the speed of the graphics core. The GeForce 9300M and 9400M chips are fabricated using a 65nm process and have a 32W TDP. They support Core 2 Duo with dual channel DDR2-800 or DDR3-1333 memory. The graphics core supports DirectX 10.0 and Shader Model 4 using 16 Unified Shaders; the 9300M runs at 450MHz Core/1,200MHz Shaders while the 9400M has a 580MHz Core and 1,400MHz Shader clock speeds. Graphics memory is shared system memory so the speed is likely to be 800MHz as we doubt there will be many DDR3 versions of this chip on the market. 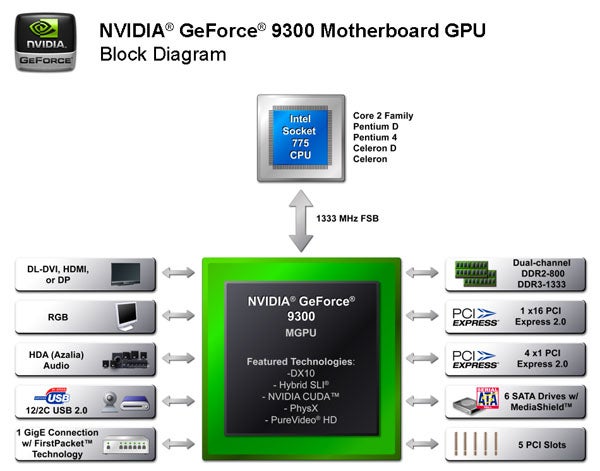 Nvidia tells us that the 9300M graphics core has slightly lower performance than a dedicated GeForce 8400GS graphics card. We don’t have a comparison for 9400M yet except to say it’s what the new range of MacBooks will be sporting. There are 20 lanes of PCI Express 2.0 so you can expect a proper x16 graphics slot on Micro-ATX motherboards while Mini-ITX designs will have to rely on the 9300/9400 graphics.

It’s a single chip that combines the Northbridge with an nForce 730i Southbridge that supports Gigabit Ethernet, six SATA or eSATA ports with RAID, 7.1 HD audio, up to 2 USB 2.0 ports and a sprinkling of PCI and PCIe expansions slots.

Ordinarily we would expect review samples to use the fastest version of a new chip however the Asus P5N7A-VM has a 9300M core but we hope in time to see the P5N7A-EM which has the GeForce 9400M core. At present we don’t have a price for the P5N7A-EM so we’ve made an educated estimate and reckon it will be a rather expensive £80-£85. The 9400M version won’t be any cheaper so the new chip will be the same price as the Intel DG45ID.

Before we consider this comparison let’s take a quick look at the Asus P5N7A-VM which really won’t take long. It’s a Micro-ATX design with four DDR2 memory slots, a graphics slot, a laid-down ATA133 connector and five vertical SATA connectors. There are three USB headers across the foot of the board along with some unused parts that have been marked for a TPM connector and a Firewire chip. Five SATA connectors may sound weird but the sixth connection has been used for an eSATA port on the IO panel along with six USB 2.0 ports, Gigabit LAN, the audio connectors and no less than four graphics outputs in the shape of VGA, DVI-I, HDMI and DisplayPort. It’s hard to find fault with that little lot.

The chipset is passively cooled with a heatsink that uses a loop of heatpipe that appears to be included for cosmetic effect as it has no obvious function. During testing the heatsink reached a relatively warm 54 degrees Celsius under load until we added a case fan to reduce the temperature.

Nvidia’s briefing about 9300M/9400M makes a point of directly comparing its new chips with Intel G45 and this is where things get a bit sticky. Our PCMark05 and 3DMark06 figures show that there isn’t a huge amount to choose between the two IGPs. Curiously enough G45 wins in the graphics element of PCMark05 while GeForce 9300M wins big time in 3DMark06. It’s a safe bet that the graphics drivers play a part in all of this and Nvidia was very specific about the installation routine we should use for our Asus board. First we had to install the nForce 20.07 chipset drivers but had to uncheck the graphics drivers and then we had to separately install GeForce 178.13 graphics drivers. It also listed a number of features that add some whiz to its new chipset; for instance we are told that Adobe Photoshop CS4 has a GPU acceleration feature that zips along on 9300M/9400M but which doesn’t work with G45. It is unclear if this is a feature of the drivers or whether Adobe has shown some special love to Nvidia but we don’t have Photoshop CS4 so the point is moot.

During the briefing we had on 9300M/9400M Nvidia stressed that its new chip is superior at gaming as G45 suffers from various incompatibilities or is forced to use lower quality settings. We also saw a long list of games that includes Crysis and Assassin’s Creed but it had never occurred to us that anyone would play those games on integrated graphics. One point that was spelled out was that 9300M/9400M looks far better than G45 mainly thanks to its ability to display water properly and we happened to have a copy of Far Cry so we gave it a try with both IGPs. The game played surprisingly well at 1,024×768 and we had no trouble using either High or Very High quality settings. We took screen grabs with both the 9300M and G45 and cannot tell the two apart. 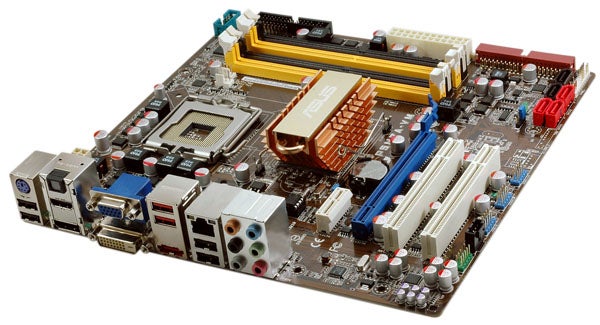 Nvidia also stresses that the new chipset supports Cuda acceleration and video transcoding to convert video from one size/format to another e.g. for your iPhone. Fair enough, if you intend to use your integrated PC for relatively serious work you will probably find that 9300M/9400M has an advantage over G45 but the rest of us would find it incredibly difficult to distinguish between the two chips.

nVidia’s new 9300M brings some good features to the motherboard table but nothing that blows us away. With regards this particular Asus model, it’s fairly basic with a stripped down feature list yet the price is uncomfortably high.