There’s something about Activision’s new Ghostbusters tie-in that gives me a cosy feeling of nostalgia. Not nostalgia for the classic movie, of course, with which it shares little more than a theme tune and some visual props. Nor does it seem to have a whole lot to do with the new film, bar a few references in the bargain basement cut scenes.

No, what Ghostbusters makes me nostalgic for is the days when every big summer tentpole blockbuster would come with an accompanying game, of which a few would be fantastic but most almost laughably crap.

Related: WWE2K17 – Everything you need to know

Ghostbusters doesn’t hit the same jaw-dropping lows as Charlie and the Chocolate Factory or Transformers: The Game, but it’s still far from good. It’s as if Activision told developer FireForge Games to make the most average budget game imaginable, then had the front to try flogging it for full-price. 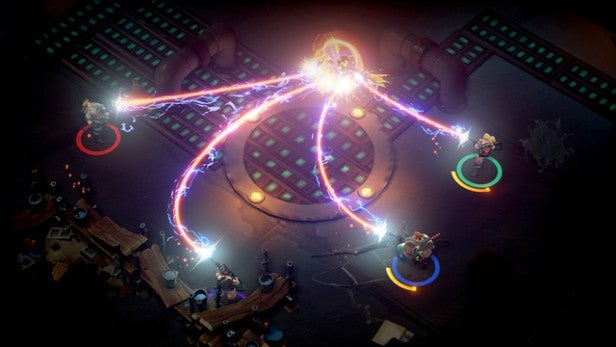 Don’t worry, Ghostbuster 2016 haters; you don’t have to play as Melissa McCarthy, Kristen Wiig or anyone else who’s – eek! – a woman. The game stars an all-new Ghostbusting team, two of whom have goolies. While the movie’s stars are out of town ‘busting in Washington, this B team faces a supernatural shockwave in Manhattan, travelling around ten stages battling and containing spooks. There’s a storyline but you can skip it. In fact, I’d suggest you do.

In terms of gameplay, it’s your basic four-player, co-op twin-stick shooter, where you roam around sprawling maps blasting away at the neighbourhood nasties. Each member of the team has a different ectoplasmis weapon – a shotgun, assault rifle, mini gun or dual-pistols – to take out the small fry, but slimers and more serious apparitions need to be dealt with by wearing them down with the old proton pack beams then locking them down into a trap.

Each character also gets their own grenade to throw, while you also get to pull out the old P.K.E. meter to reveal hidden objects and extras and open the odd door. Beat the boss, complete the level and you can spend a skill point on character upgrades, beefing up your weapons or reducing grenade-throwing cool-down times. 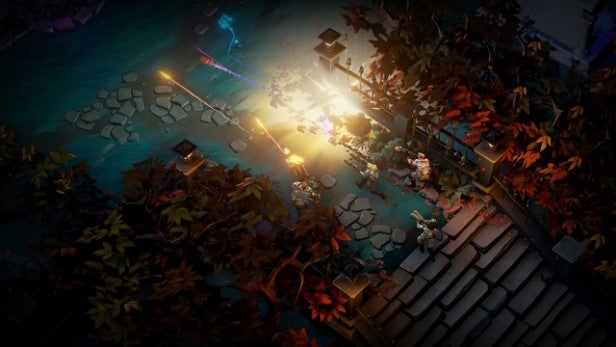 There’s nothing new here, but it’s not a bad basic formula for, say, a £6.99 download game. While the cut-scenes are amateurish and the constant voice samples incredibly mindless and repetitive, Ghostbusters has competent Unreal 4 cartoon visuals and decent controls. Some of the ghosts are nicely designed and the music isn’t all that bad. It was never going to be a masterpiece, but it might – just might – have been OK.

Yet FireForge has managed to pull defeat from the jaws of not-quite-victory through a combination of dull level design, clueless pacing, boring combat and an utter lack of any interesting ideas. What I’ve described above is pretty much the whole game, so it doesn’t matter whether you’re investigating a haunted sanitarium or a creepy cruise-ship; the game plays in exactly the same way. The same ghosts reappear continuously, backed up by two or three specific ghouls per area. This all grows very tired, very soon.

There’s not a single level I’ve played that doesn’t stretch a good ten, twenty or even thirty minutes longer than it needed to, and there’s so little variety in either the visuals or gameplay that you’d be surprised how long that feels. What’s worse, you face multiple missions in the same setting before you’re allowed to progress, so the spooky graveyard that’s just bored you for the best part of an hour comes back to bore you for a good half-hour more. ‘Please, make it stop!’ I was heard to cry. 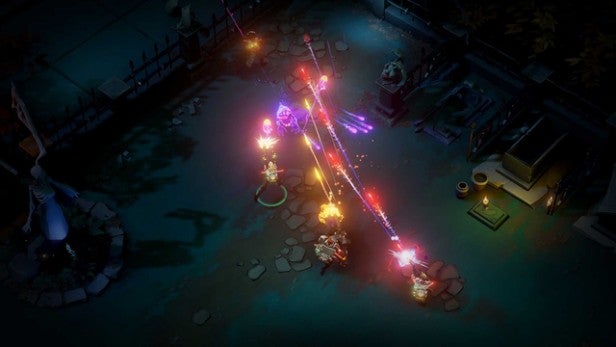 You can, of course, enjoy it (in the sense of being bored rigid) with up to three players, but the zoomed-in view doesn’t make doing so easy, and do you really want to share the pain? Members of my family conscripted to play the game with me managed to make it through one level before making their excuses and leaving to do their school homework (!) or the washing up (!!!) Trust me, this doesn’t happen with Skylanders, Lego Dimensions or New Super Mario 3D World. Heck, it didn’t happen with The Peanuts Movie game, which once seemed alright but now seems like a work of staggering genius.

The most baffling thing of all is the price. Look at Steam, the Xbox Store or PSN and you’ll already find great twin-stick shooters in a similar vein for half the price at less. Think Alienation, Helldivers, Lara Croft and the Temple of Osiris. Ghostbusters might be more family friendly but it’s not even in the same league. How on Earth, then, does Activision justify selling it for over £30?

Verdict
Ghostbusters has a vaguely half-decent core, but stretches it too far over interminable levels wrecked by mindless repetition and a lack of strong ideas. It’s dull played solo, tedious in multi-player and generally no fun whatever you do. The new movie has its lovers and its haters, but the game will create no such divisions. Whoever you are, whatever you like, it’s just no good.