Introduction
It has always been difficult to measure where the audio enthusiast’s needs end and professional requirements begin and the line is getting ever more blurry. In September we reviewed the Genelec 6010A speaker system, its entry level model and the only one it actively pushes to consumers. Its performance was astonishing and very well priced, but what about those audiophiles keen to take another step up the Genelec ladder? 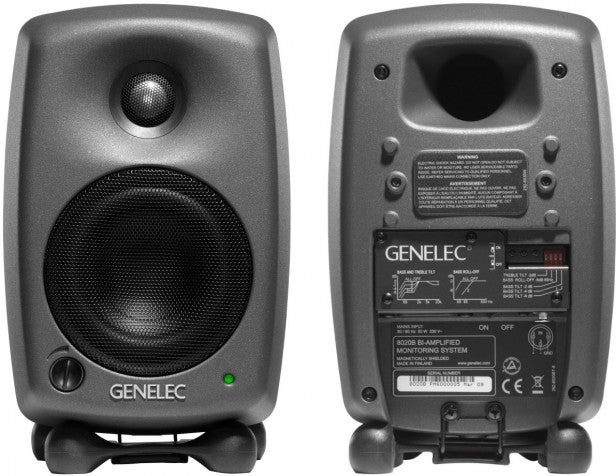 The answer is the Genelec 8020B, another bi-amplified ‘active’ speaker positioned directly above the Genelec 6010A but with substantial improvements across the board in terms of power, frequency and bass response. It also pairs specifically with the Genelec 7050B, a completely different sub with virtually twice the output of the 5040A used with the Genelec 6010A. Yes as single step-ups go, the specification jump from the 6010A to the Genelec 8020B is about as big as they come and one which again throws into the spotlight the question of where the overlap between enthusiasts and professionals breaks down.

Interestingly for a predominantly professional company Genelec has a strong emphasis on unified design and as such the Genelec 8020B is like a larger Russian doll of its smaller sibling. This means the same Adipose-esque design with rounded corners, rubberised feet, super tough die-cast aluminium construction and choice of matt white or black finishes are used. That said there is no mistaking the two as given the size and weight leap from the 6010A’s tiny 195 x 121 x 114mm and 1.4Kg to the Genelec 8010B’s still relatively compact 242 x 151 x 142mm and 3.7Kg.

Meanwhile the difference in the optional sub is even greater with the circular marshmallow-inspired design of the 5040A giving way to the more industrial, rectangular look of the 7050B. Here the size and weight differences are even more apparent with the 5040A measuring a living room friendly 251 x 305mm and weighing 6.5Kg while the 7050 is a hefty 410 x 350 x 319mm and whopping 18Kg. Again for so-called ‘prosumers’ it is worth bearing in mind this is the smallest step up Genelec offers from the entry level 6010A in a range which extends to concert rigs. 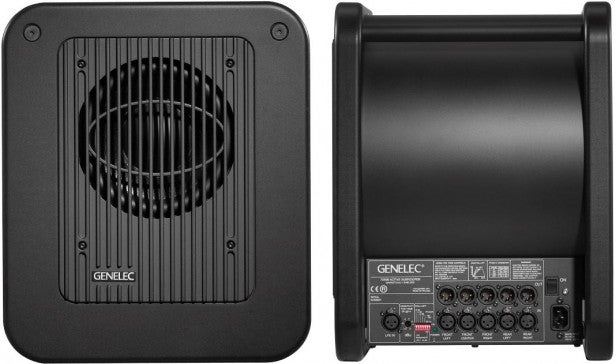 In the speaker world it is often proclaimed that size matters, so does it translate here? The answer is: by the bucket load. In terms of raw specifications, the Genelec 8020B doesn’t actually produce vastly louder audio than the 6010A, increasing just 2dB to 95dB per speaker – a still window-shaking level. Where the improvements come, however, are in the projection of that sound through significantly bolstered bass (20W vs 12W) and treble (20W vs 12W) drivers as well as a wider frequency range of 65Hz – 21kHz opposed to 73Hz – 21kHz.

For the listener the end result is noticeable primarily at distance with sumptuous lows, mids and highs that would fill even the largest of residential home spaces and in a 2.0 configuration the 8020B will satisfy all the needs of most audiophiles. Add in the 7050B and the 8020B transforms into a rumbling, snarling beast with the sub offering a further 100dB via a 70W, 8-inch active driver with super-wide 25 – 120Hz frequency response.

Unlike the 5040A the 7050B isn’t downward firing, which will give respite to downstairs neighbours should you live in a flat and both subs can connect up to five speakers in total for true home cinema fanatics. Tinkerers will also be able to adjust the sensitivity, roll-off and phase of both speaker and bass to suit their taste.

All of which brings us to the biggest strength/weakness of the Genelec 8020B speaker system: its sound signature. In short it doesn’t have one. Whereas mass market consumer brands push bass boosting proprietary enhancements and typically try to push a specific part of the mids, lows or highs to create a brand/sound association, the Genelec 8020B – and Genelec speakers across the board – are a blank page.

Given their professional ties the aim is to recreate your audio as neutrally as possible. This means feed them low bitrate MP3s and there is no effort to mask over the flaws, in fact the speakers will go out of their way to highlight them. Then again feed them high quality MP3s (minimum 256Kbps and higher), CDs or lossless audio and all the detail and finesse of the original recording comes across without the mucky fingerprints of a brand’s particular sound signature all over it. In short: keep the Genelec 8020B on a high quality diet and you will be richly rewarded.

So how do the costs break down? At £290 per speaker we have to say surprisingly well with a £580 2.0 investment more than enough for the vast majority of users. Include the 7050B, however, at £709 this outlay more than doubles. Then again it allows for gradual investment evolving a setup from a 2.0 to 2.1 to 5.1 system over time. A further sign of the Genelec 8020A’s professional aspirations is its use of XLR rather than RCA connectors, but pricing carries little premium over RCA cables and XLR is a standard which locks in place, something frustratingly overlooked by RCA. 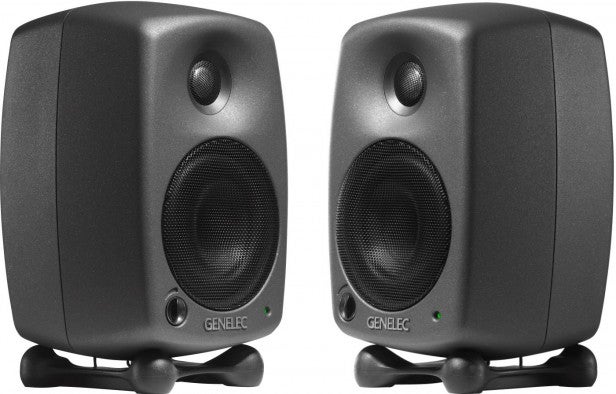 A further value element to factor in is all Genelec speakers are active monitors, aka loudspeakers with built-in amplifiers and active. This assists accuracy – a vital aspect in Genelec’s neutral sound reproduction – and reduces the risk of blown drivers, but also means audio sources do not need separate costly amplifiers. Consequently you can connect something as small as a smartphone or MP3 player directly to even a 5.1 8020B/7050B setup and it will provide the necessary additional power.

We asked at the start of this review where the line between enthusiast and professional equipment lies and in the strictest sense the Genelec 8020B speaker system crosses it. As such it won’t plaster over poor quality audio, feature an Apple dock and it opts for professional cabling standards, but the flip side is its phenomenal, room filling audio available at prices below vastly less impressive consumer-focused alternatives. This makes crossing the professional divide worthwhile on this occasion and though the Genelec 6010A will be more than enough for the vast majority of users, the Genelec 8020B will amaze even the most demanding of home entertainment fanatics.