Introduction
It is often said that good things are worth waiting for and our hunt to review Genelec’s 6010A speakers, in tech terms, has been nothing short of epic. We were first blown away by them 15 months ago in a basement sound studio during a tech tour of Finland and with commercial, but no press availability in the UK it has been a long hunt to get them back into our grasp and a more real world testing environment. So were they worth the wait?

First a bit of background, because who exactly is Genelec? The Finnish company has actually been around since 1978 and built a large following amongst audiophiles, professional recording studios and video editing suites. Customers include the BBC and Sky Television. Until the introduction of the 6010A, however, Genelec hasn’t been particularly visible to the mass market. 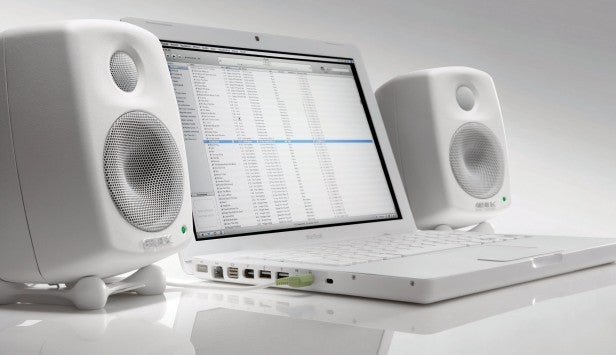 Active Monitors
What has gained Genelec a cult following in pro circles is that it produces active monitors rather than traditional loudspeakers. As we mentioned at the time of our original preview: “This means that rather than having a single conventional amp producing one big signal to then be split up by a crossover circuit in the speaker, it has separate amps for each cone within the speaker unit. This allows the amps to be optimised for each driver and in particular results in a more accurate sound at low volumes. It also means you don’t need a separate amp – just plug the speaker into a conventional line-level output, or an mp3 player’s headphone jack.”

Furthermore all Genelec speakers can adapt their sound to their environment via a gain dial at the back, switching to compensate for wall or corner proximity (Genelec offers setup guides) and each speaker is individually powered. This approach makes it easy to add further speakers in future, move around a setup or to split up a wide array into separate arrangements around the home – no further amps required. We were supplied with two 6010A speakers and an optional 5040A dedicated subwoofer. 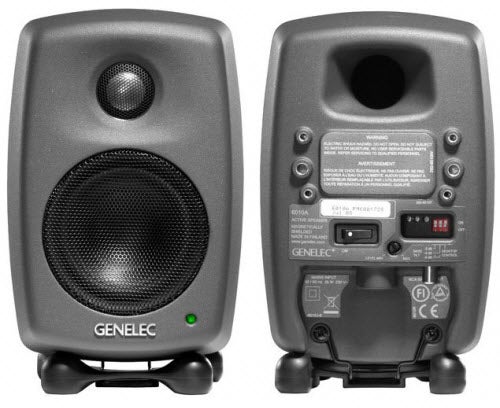 Design
When opening up the 6010A what is initially most striking is the size of each speaker. They stand just 181mm tall, 121mm wide and 114mm deep while weighing 1.4Kg. Genelec offers a travel case for pairs making them reasonably portable. In terms of design the immediate word that comes to mind is ‘cute’. The Genelec 6010A looks strikingly similar to the adorable Aidpose aliens from Doctor Who with a curved rectangular design and thick rubber feet to avoid surface vibration. For those looking to avoid cult TV references, they also come in black.

Construction is excellent with a matt, textured and extremely rugged cast aluminium design. Notably our units came in white and while we managed to scuff one speaker the marks simply rubbed off. We haven’t seen many more sturdy units in our time.

As for the Genelec 5040A, it is a larger 6.3Kg and measures 251 tall with a 305mm diameter and looks like a giant marshmallow. Again this is no bad thing though as the subtle, minimalist look quickly blends into a room or can be made a feature. What’s more, it has the same tough-as-nails finish. It also comes with a dedicated volume control which looks like a shrunken version of the 5040 and therefore even more like a marshmallow. In our opinion both as a 2.0 and 2.1 setup they look the business. 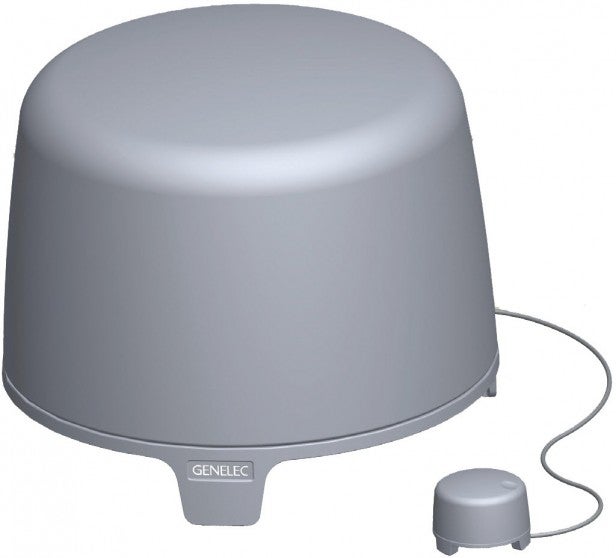 Features
Given Genelec’s background in high end audio, the most prominent question in our mind was how much compromise would be in the 6010A. The answer is surprisingly little. The Genelec 6010As feature twin 12W amplifiers, one each for feeding the 3-inch bass and 3/4-inch treble drivers and bass response is 73Hz to 18kHz.

These figures are good, but what turned our heads is the quoted maximum output level of 102dB – not just enough for a desktop speaker or dock replacement, but enough to be the foundations for a home cinema. Add in the optional Genelec 5040A subwoofer and the bass response drops to 35Hz with the magnetically shielded, downward firing 6.5-inch bass driver fed by a 40W amplifier contributing a further 96dB at maximum volume (it is also independently adjustable). 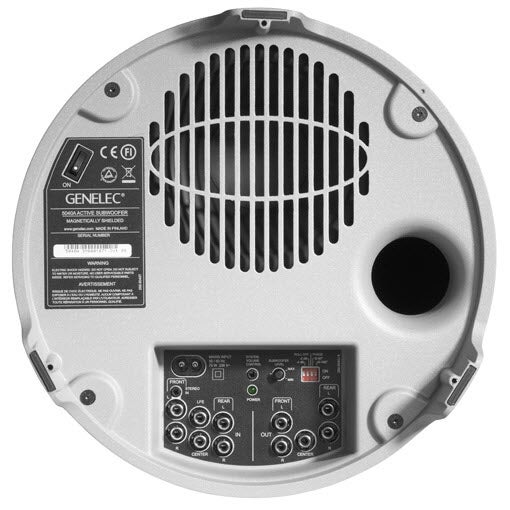 The 5040A is designed to handle up to five 6010A speakers for a 5.1 arrangement leaving plenty of room for growth in future. Connectivity includes 3.5mm and phono inputs for each speaker, but it is slightly curtailed by the lack of HDMI for home cinema enthusiasts, even if phono is a perfectly adequate alternative.

Performance
In a world swamped by bass-heavy ‘warm’ sounding speakers and docks the term ‘accuracy’ is almost a dirty word, but Genelec prides itself upon it. A background in professional recording environments means hearing what is there rather than the preferences of the speaker maker is vital and the Genelec 6010A has this same reason d’être.

As a 2.0 setup the 6010A packs tremendous punch and a wonderful sense of scale and will easily replace premium speaker docks or provide an upgrade on your TV’s integrated speakers. Detail is exceptional with the 6010As determined to dig out nuances you’ve never noticed in your favourite tracks and bass response is indeed excellent allowing them to happy exist without a dedicated sub. Genelec offers suggested settings for configuring each speaker to any room size, but for those happy to plug and play they sound superb out of the box with subtle extra rewards there for those who do tinker. 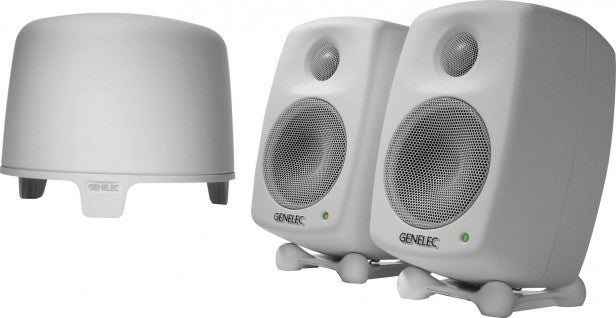 Add in the 5040A and in a 2.1 arrangement the Genelec 6010As evolve again. The detail remains, but the 5040A brings extra muscle to both big beat tracks and Hollywood action flicks. The downward firing sub can be felt in floors, tables and chairs at high volume and when cranked up to max will keep even the biggest of bass-heads happy with epic, room-shaking performance. Impressively in both 2.0 and 2.1 arrangement we found no distortion at peak volume and, remarkably, in the former no bass cut out or restriction.

While the 6010As and 5040A are happy to play the hooligan it is worth mentioning their fondness for low volumes as well. Here the active monitor technology kicks in with the separate amps for each speaker cone coming to the fore as music can be listened to quickly without losing any midrange or bass – common side effects of the single conventional amp design.

If we are looking to pick holes in either 2.0 or 2.1 setup it would be a common one in the premium sector: the speakers are what you feed them. While cheaper speakers can mangle higher and lower bitrates into an indistinguishable melange, the ability of both the 6010A and 5040A to pull detail from lossless and high bitrate music means once the quality of the source drops it is noticeable. We’d suggest this is primarily a criticism of low bitrates, but if you are going to invest in Genelec speakers it is also worth investing time in their diet.

Value
So often the killer when attempting to attract a wider customer base, the Genelec 6010A is a surprisingly light touch on your wallet given what they offer. Search online and the 6010A speakers can found from £189 separately or £378 per pair (RRP is typically £239 per speaker), which is excellent value considering their premium dock killing performance, flexibility and expandability.

Similarly the 5040A can be found online for £389 (RRP £479) which doubles the size of your investment, but given its role as both music maestro and home cinema audio replacement (with the potential to scale to a 5.1 setup) it is a bargain compared the likes of £1,000 fashion soundbars such as the Libratone Lounge. Furthermore the active monitor system means there is no need to invest in a separate amp. 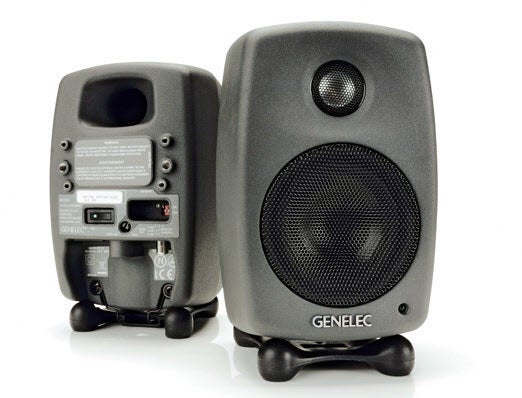 As such while the well heeled audiophile will jump in at the circa £1,300 cost of a full 5.1 Genelec 6010A 5040A system, more impoverished music and home cinema fans can happily invest incrementally knowing they will ultimately reach the same end result and what an end result it is.

Verdict
Genelec is a brand famed amongst recording studios and professional sound editors, but with the 6010A it has released speakers to amaze the mainstream audiophile. As a 2.0 setup the 6010A looks innocuous, but it is stylish and ruggedly built with detailed, powerful, size defying performance and remarkable scale while its active monitors mean it sounds equally good at low volumes. Connected to the optional 5040A subwoofer, the Genelec 6010A becomes a serious home cinema arrangement with the potential to scale to 5.1. HDMI connectivity would have been nice, but throw in highly competitive pricing and Genelec has produced a truly standout system. If we awarded half scores they would be a 9.5.