The Edge 820 is the newest recruit in Garmin’s well-known Edge GPS cycling unit range. It sits towards the top-end of the Edge series, with only the Explore 1000 and the Edge 1000 above it. It’s firmly geared towards the obsessed cyclist and is filled with enough features to convince yourself you’re on a professional training squad. If you know how to use them, that is.

The Edge 820 is billed as a “cycling computer” – and for good reason. At 73 x 49 x 21mm, it’s reasonably compact and has plenty of heft behind it. I was confident that it would survive being dropped – which happened on more than one occasion – or from any crashes I suffered during testing.

The ease of attaching the Edge 820 is dependent on a few factors. First, the size of your bike’s stem. I was able to have the Edge 820 sit securely on the stem of both my road and mountain bike, thanks to the inclusion of plenty of different-sized elastic fastening rings.

Happily, you can also attach the device to your handlebars via the mount provided. Although my personal preference is to have the device on the stem of my bike since it looks neater, the mount is well made and secure. 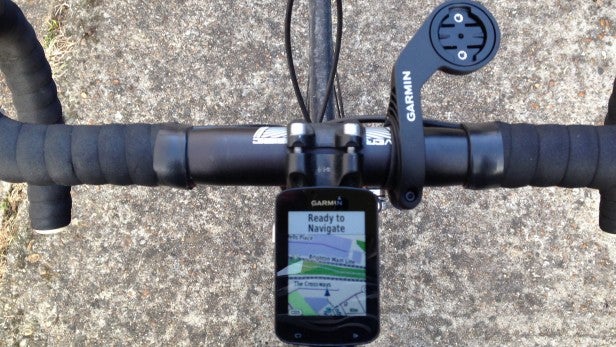 The display (58.4mm) is large enough to make Garmin’s pre-uploaded maps usable, and it directed me home on multiple occasions from riding off-road in the woods.

The IPX7 waterproof rating proved useful, too. The Edge 820 survived a ride in torrential rain without suffering any effect. What’s more, the touchscreen continued to work despite the surface water.

The homescreen consists of three circles. One labelled “train”, the other “navigation” and the third “training”. The top bar shows battery life, GPS strength, Bluetooth, the status of any ANT+ sensors equipped, as well as temperature and the time.

It’s easy to navigate and nothing essential for a ride is ever more than a swipe or tap away. Navigate to the right and the “train” circle turns into “indoor” and then into “race” – the point being that you can configure the data screens on each separately. Swipe down from the top and you can alter brightness and see a more in-depth satellite strength. 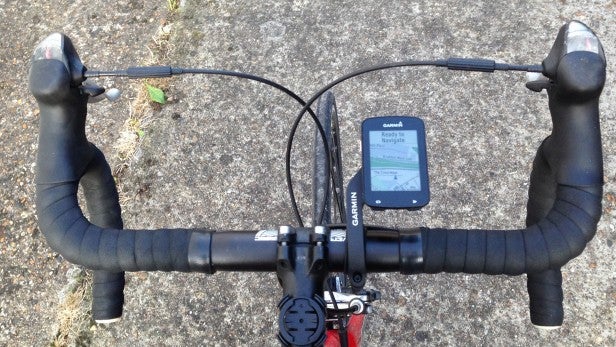 It’s from here that you can manage any connected devices with which you train. The bottom bar lets you navigate to your user profile as well as to that of the device. You can also input your stats such as VO2 Max, stress score and training zones.

It’s hugely customisable, whether that’s simply the colour of the menus or the complete layout of data screens. Which is why setting up the device wasn’t either quick or simple.

The Edge 820 isn’t a setup and forget device; it encourages investigation. Don’t expect to be able to set it up in the half an hour before you’re supposed to be riding. It requires an evening spent on the sofa exploring everything it has to offer.

More concerning was the iffy calibration of the touchscreen. It required a firm, slow-press to register anything. This is fine when you’re sat on the sofa, but using it while travelling at 30kph on a busy road is a different matter altogether. This was most acute when searching for an address, with the device registering different characters to the one I actually pressed. This became more than a little infuriating. 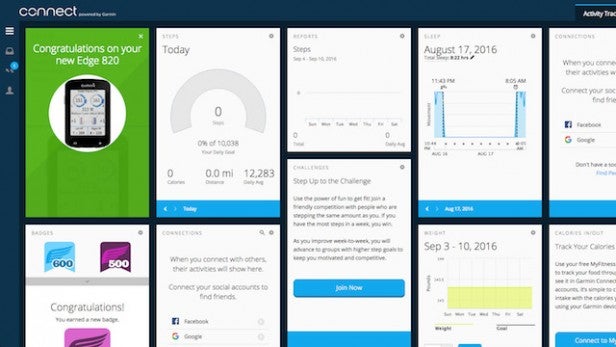 The Edge 820 is designed to be used alongside Garmin Express, a database and fitness tracking program that acts as the hub of all your activities. Setup takes place on the Express program on your Mac or PC. It’s here that you can sync your device by plugging it in over USB. 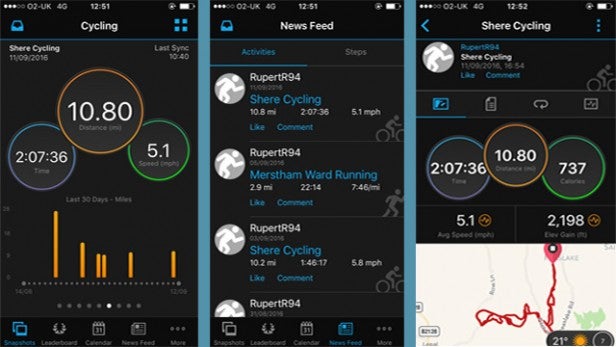 There’s also the Garmin Connect app for smartphones. Bluetooth pairing and syncing is incredibly flaky, however. It took several attempts to get the data across.

In comparison, my Garmin Vivoactive watch pairs flawlessly. I actually find both Garmin Express and its counterpart Connect app too unwieldy to use properly, hence my preference to use Strava instead. In addition, Garmin Connect isn’t as widely used, making the competition over segments a little less exciting.

Confusingly, there are two Edge 820 models in Garmin’s range – the standard Edge 820 and the cheaper Edge Explore 820. So what’s the difference? The more expensive model tested here comes with the ability to connect to power meters and Wi-Fi, as well as providing other performance training features. What marks this model out as the more advanced unit is its compatibility with Shimano Ultegra Di2. These electronic gears are only ever found on top-tier bikes.

Other flagship features include GroupTrack. By pairing your device you can keep track of your buddies if they fall behind. However, depending on your smartphone, this could be a huge drain on battery. I’d also be suspicious of the Bluetooth pairing, especially considering the issues I had in testing.

The level of data acquisition makes the Edge 820 perfect for the cyclist in training. Power output, cadence, heart rate, GPS, elevation, barometric data, altitude and location can all be tracked. There’s the option to add training programs as well. It’s worth noting that you’ll need separate ANT+ sensors for power, HR and cadence, however.

GPS accuracy on the road is excellent. However, on downloaded, off-road routes the marker sits roughly 10 meters from where the marked trail is. There were differing times between my iPhone and the Edge 820, too, with the iPhone often triggering segments earlier. There was often also a discrepancy between the total elevation of rides tracked. Despite measuring a shorter ride – due to pauses – the Edge 820 tallied a higher elevation. 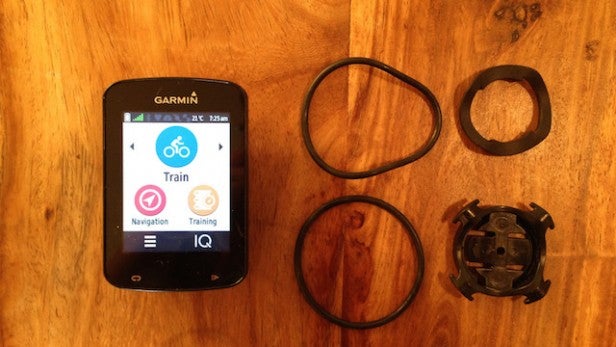 While pegged as a device for road riding, the Edge 820 proved its worth off-road. GLONASS – the more accurate GPS tracker – held its own the majority of the time, despite the heavy tree cover. When used on the road, the device never once lost my location.

For me, the Edge 820’s navigational tools were its standout feature. Not knowing the area wasn’t a problem. Download a GPX or CRS file of a route from Strava (or any GPS route site), upload it to your Edge 820 and you can display it on-screen with directions. I expected this level of accomplishment for road use, but was genuinely blown away by its usefulness for mountain biking.

The round route feature proved its worth when road riding. Input the distance you want to ride and it will formulate a route using Garmin’s pre-uploaded maps. This allowed me to get out after work and make the most of the diminishing summer light without wasting precious time creating a route.

Garmin quotes the Edge 820 as having 15 hours of GPS-enabled use. It certainly will cover multiple rides if you remember to power it off after each one. Leaving it in standby still uses GPS and is a drain on the battery. My rides were only ever three or so hours long, but I still always charged it before the next ride to be on the safe side – especially as I kept forgetting to switch it off. The Edge 820 is charged over a proprietary USB cable. 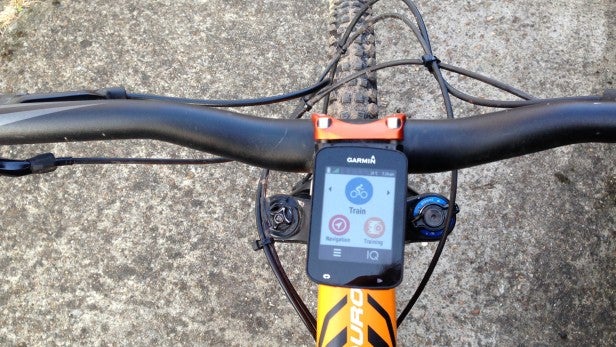 The Edge 820 is an excellent cycling computer and is perfectly equipped for pushing your performance. With its many data fields and compatible performance-pushing ANT+ sensors, it’s a great training partner. Disappointingly, however, Garmin’s software remains its weak spot, but the Strava integration does at least provide an alternative. The poor touchscreen is also a troubling issue that makes the Edge 820 cumbersome to use out on the road.

If you’re not so fussed about your performance data, it’s worth considering the cheaper Explore 820. It lacks only the performance features of the standard Edge 820 counterpart and retains the same excellent navigational tools. Plus, it costs £50 less.

A great tool for the performance pusher, but might feature too much detail for those who just want to ride.