The Galaxy Note 20 will not be remembered as a high point for the Note series. It loses out on too many of the higher-end elements of Galaxy phones without a commensurate drop in cost.

The Samsung Galaxy Note 20 is a lower-cost alternative to the Galaxy Note 20 Ultra. It’s for people who want an S-Pen stylus but can’t stomach the very high price of the latter device.

However, given its plastic back, it’s hard to view this device as value-led. The Samsung Galaxy Note 20 is quite pricey for a phone with a plastic rear.

Its biggest issue is that the Samsung Galaxy Note 20 struggles to make it through a day of moderate use. We’ve reviewed the Exynos CPU model here; those thinking about buying the USA Snapdragon version may find it lasts longer.

Questionable value and relatively poor battery life are disappointing, then. But the Samsung Galaxy Note 20 is otherwise a pleasant phone featuring much of the functionality of other Samsung flagships, plus that excellent S-Pen stylus.

It may be important to note that Samsung recently released the Galaxy S21 and S21 Ultra and you’ll find these in our best phone and best Android phone lists. 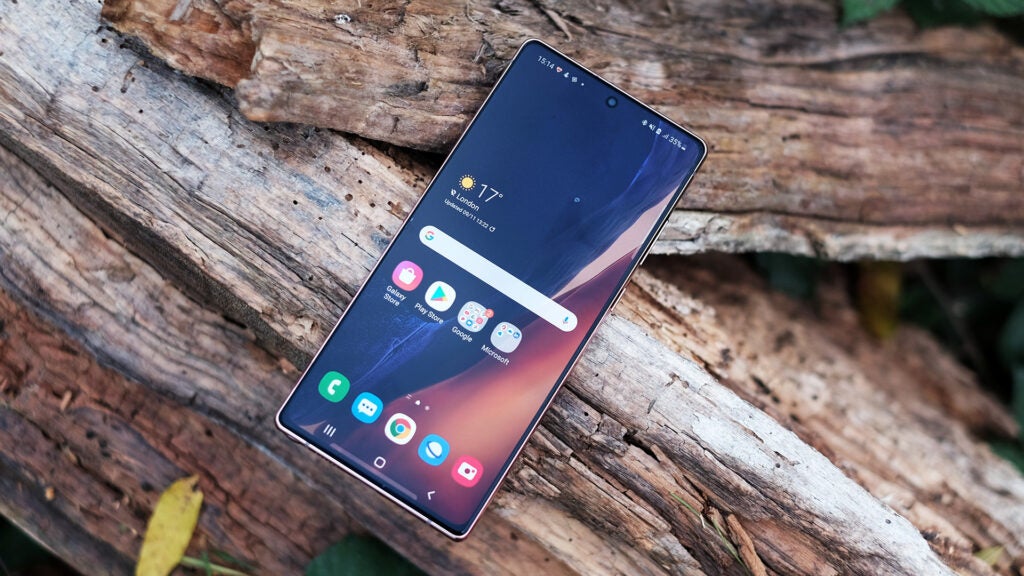 You have to wonder whether there were arguments aplenty among Samsung’s design team about the Galaxy Note 20’s most contentious parts. It has a plastic rear panel, rather than the curved glass back of other high-price Samsung handsets.

This is one of the most expensive plastic phones ever. Samsung has made it look great, of course, with a matte finish that could be mistaken for glass from afar. However, a few weeks in and the Galaxy Note 20 has picked up a few scuffs at its corners that likely wouldn’t be there if this were a piece of Gorilla Glass 6.

The previous Galaxy Note 10 also had a curved glass front. This one is flat, which is another way for Samsung to save some money in the Galaxy Note 20’s manufacture. 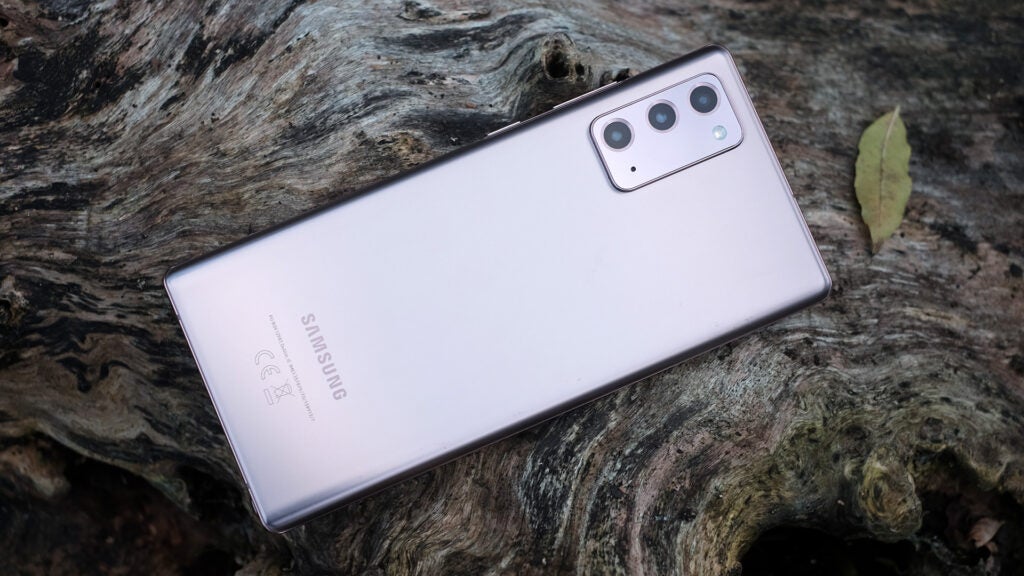 It’s a decent-looking phone, but not one made to the standards I expect at this price. The Galaxy Note 20 does at least come with IP68 water-resistance.

The handset features Samsung’s in-screen fingerprint scanner, too. This is an ultrasonic pad originally sold to us as an improvement on the optical tech used by other manufacturers. This isn’t the case, however; in use, it isn’t as fast as the best optical scanners, and still takes issue with wet thumbs. But in this generation it is at least comparable with the quicker pads.

The Galaxy Note 20 is missing a headphone jack, which is similar to almost all phones at the price. It does have a solid pair of stereo speakers, however, offering good volume and even a hint of bass. 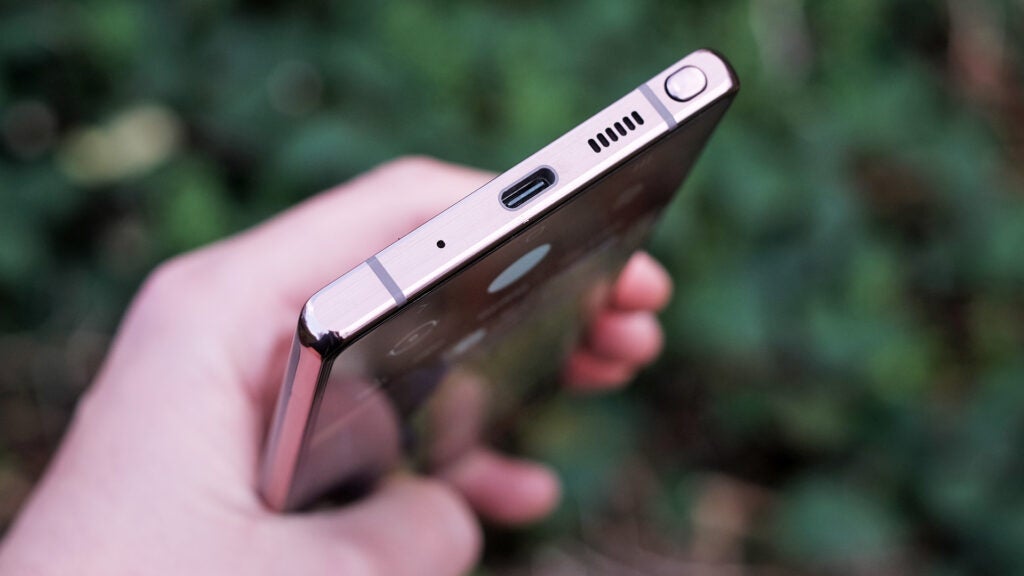 All Galaxy Note 20 hardware extras seem inconsequential next to its S-Pen, this phone’s most important piece of technology. If you don’t care about it, you probably shouldn’t buy a Note.

This is a slim stylus that slots into the bottom of the phone. And it has a tiny battery that recharges in-situ, allowing for remote control-style gestures. You can use the pen as a music or camera controller.

Motion sensors also enable Air Actions, gestures that fire off when you hold the S-Pen’s button and waggle it in a certain way. These are customisable, and can load apps or act as fundamental navigation controls such as “back” or “home”.

I can’t imagine many Galaxy Note 20 users will use Air Actions or the remote controls too often, but the S-Pen’s job as a stress-dissolving doodling accessory seems more vital than ever. It’s an excellent little drawing tool, with pressure sensitivity and a feel that isn’t too dissimilar to using a graphics tablet. 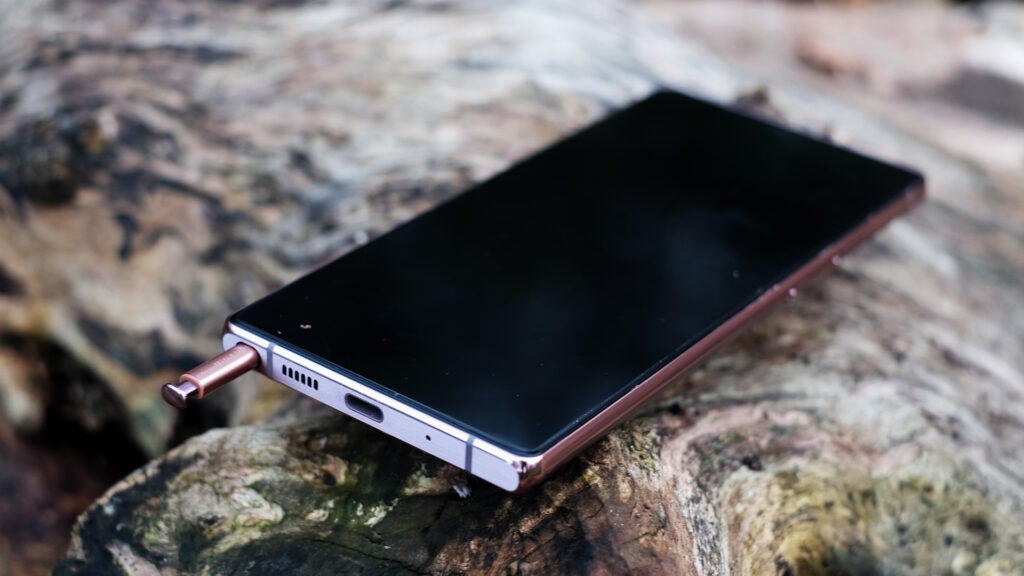 A simple Samsung app called Pen Up comes pre-installed, but if you’d like to create more complex layered artworks then you’ll find plenty of options on Google Play. Apps such as Autodesk Sketchbook and Adobe Photoshop Sketch make use the of S-Pen’s 4,096-level pressure sensitivity.

Note that the Galaxy Note 20’s stylus isn’t quite as reactive as that of the Galaxy Note 20 Ultra, with 26ms latency instead of 9ms. However, unless you draw in an app/on an image that actually starts straining the phone, the pen line is able to track the S-Pen nib fairly well.

Display – Excellent colour performance, but the Samsung Galaxy Note 20 screen could be brighter

This slower latency is largely down to the difference in the Samsung Galaxy Note 20’s display tech – which, once again, doesn’t live up to what you might expect at the price.

It’s a 60Hz OLED screen, at a time when other phone makers are including 90Hz and 120Hz panels into much cheaper mobiles.

Side-by-side the difference in scrolling smoothness between the Note 20 and Note 20 Ultra is obvious, in part because OLED’s fast-reacting pixels are the best showcase for a high refresh rate. The Galaxy Note 20’s 60Hz refresh rate doesn’t offer the same level of smoothness.

This isn’t a bad screen, just one that looks similar to those included on previous Note phones. 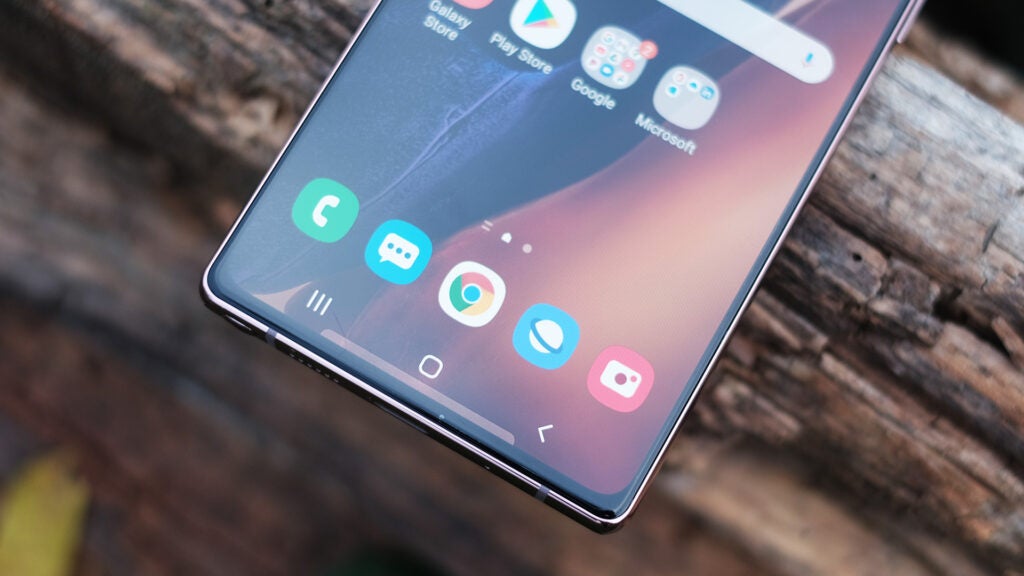 It supports HDR, and has the colour performance you’d hope for from a top-end Samsung. There’s a “Natural” mode that appears to adhere to the sRGB gamut. This will appear undersaturated next to most phones, but lets you appreciate the difference between truly vivid and pastel-like tones.

The Galaxy Note 20’s Vivid mode is super-saturated, and likely either uses the full colour whack of the display panel or is calibrated to Adobe RGB. We’re offered two extremes, which is the reason I wish there was a mode in-between. Samsung used to provide a greater number of display modes; and DCI-P3 is arguably a better mid-point fit for saturation and taste. It’s what Apple aims for in its iPhones at present.

Resolution isn’t super-high either at 2400 x 1080 pixels. The Note 10 had the same resolution, but it’s easier to notice fizz if you look close at small text on this larger screen. Still, it isn’t obvious.

Maximum brightness lags behind that of the Note 20 Ultra, too. On a bright day it will reach around 608cd/m, which is only half the power of Samsung’s best. It’s enough to make using the phone outdoors comfortable, and beats the 450cd/m of mid-range phones. But it doesn’t come close to the OnePlus 8T, for example, which reaches around 1100cd/m.

The Galaxy Note 20 runs Android 10 with Samsung’s usual UI layered on top. This both looks and feels great, despite a few recent substantive changes.

It strays more from the default Google style than most. Samsung One UI replaces Google Assistant features with those of Bixby – that’s Samsung’s digital assistant – and has app menu pages instead of a scroll. But you’ll likely find your way into its groove pretty quickly, even if this is your first Samsung phone.

The Galaxy Note 20 is home to the Exynos 990 processor, supported by 8GB of RAM and 256GB of storage. However, the US version is a step up, running a Snapdragon 865+processor, which has a better GPU and superior power efficiency. 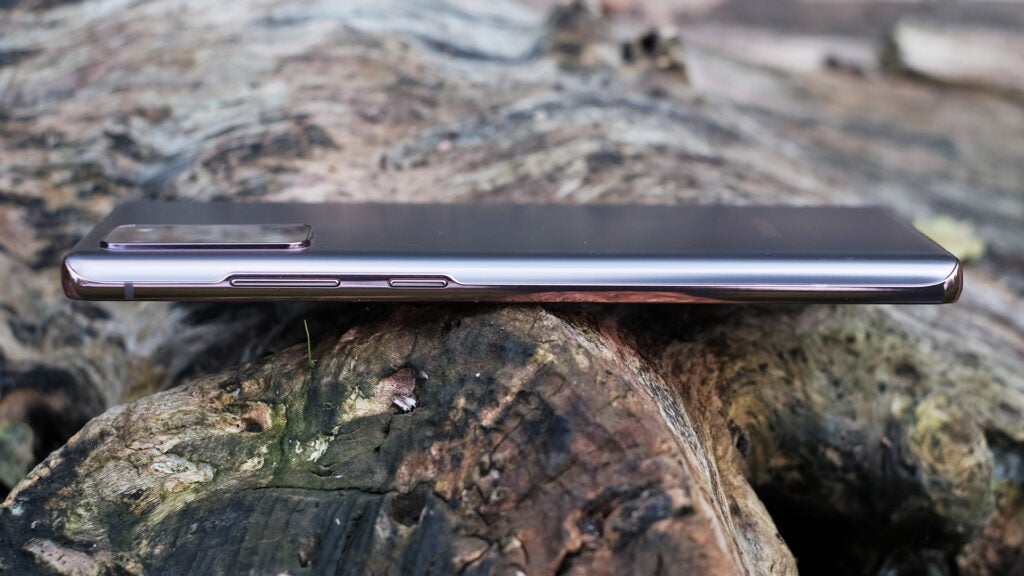 The Samsung Galaxy Note 20 does have enough power to satisfy, however. It feels quick day-to-day, with demanding games running just fine. However, it isn’t quite true to say there’s nothing to make use of more power, especially in reference to the GPU.

Fortnite runs at 60fps (many phones are limited to 30fps), but some frame rate drops are evident and GPU usage often reaches 90-100%. ARK: Survival Evolved often tips over to 100% usage, even though it’s limited to 30fps.

The most obvious slow-down moments in both titles weren’t actually as a result of the GPU maxing out, suggesting they are caused by something else such as loading textures. But today’s games, at capped frame rates, will still use all the power on offer here.

A Samsung Galaxy Note 20 is “powerful enough” then, but far from the most powerful at the price. You might notice the difference more in a year or two. 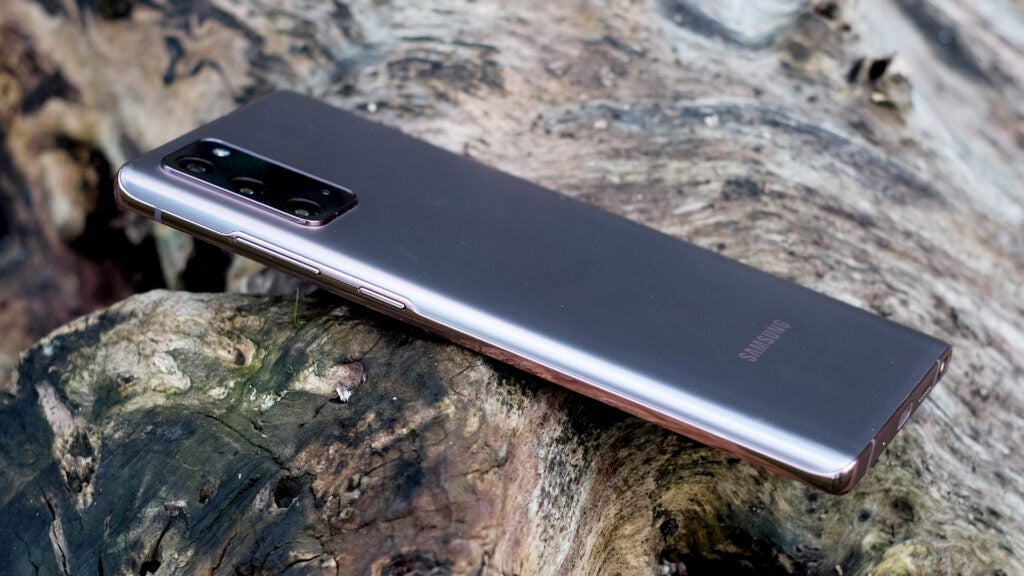 It takes lovely day-lit images, with Samsung’s usual imaging approach. Skies will often look too blue; grass will often look too green – but it usually results in very striking images. Sunsets often look closer to what you’d want them to look like; phones tend to struggle to really bring out those rich orange and red tones with the right intensity. 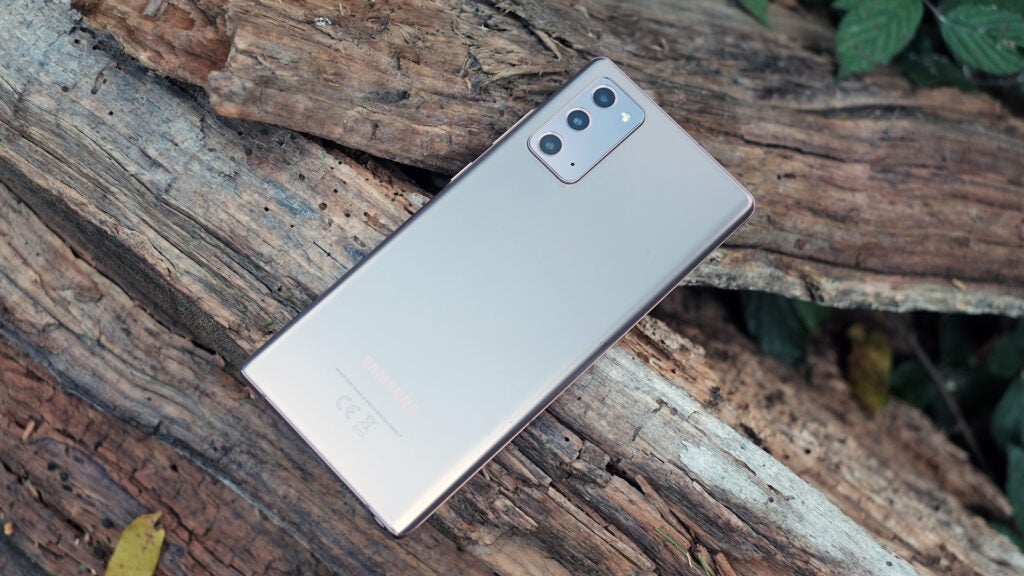 The Galaxy Note 20’s default zoom range is 3x, but the phone doesn’t actually have a 3x zoom camera. Its 64-megapixel camera has just a slightly narrower field of view than the main camera, but uses its higher resolution to bring out more detail.

It switches to this secondary camera at 2x when you use the fine-grain zoom controls.

Images at 3x look good, but you don’t get the zoom power of the Note 20 Ultra, which takes decent 10x images. You’re best off sticking to 3x here. Digital zoom goes all the way to 30x, but these images look soft.

The Galaxy Note 20 performs well at night, holding on to more texture detail than most phone cameras. However, it isn’t the best at handling ultra low-light scenes, where the phone is left to create an image that looks near-black to the naked eye. This is only an issue if you like to push the hardware and take an almost counterintuitive approach to your photography, though. 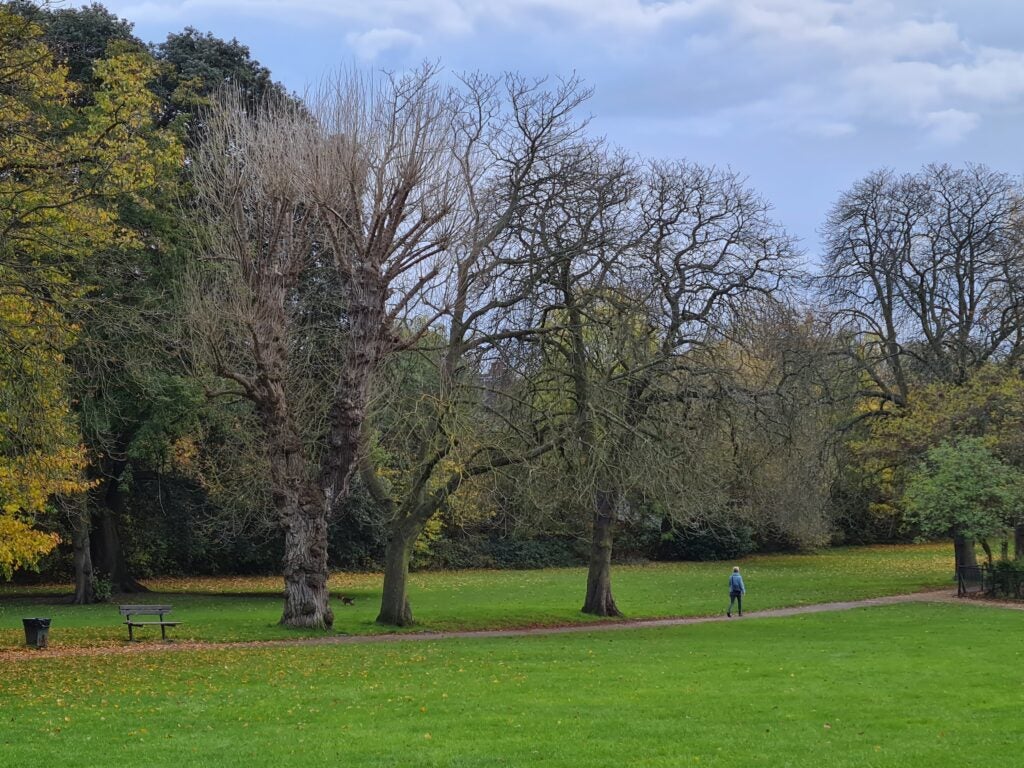 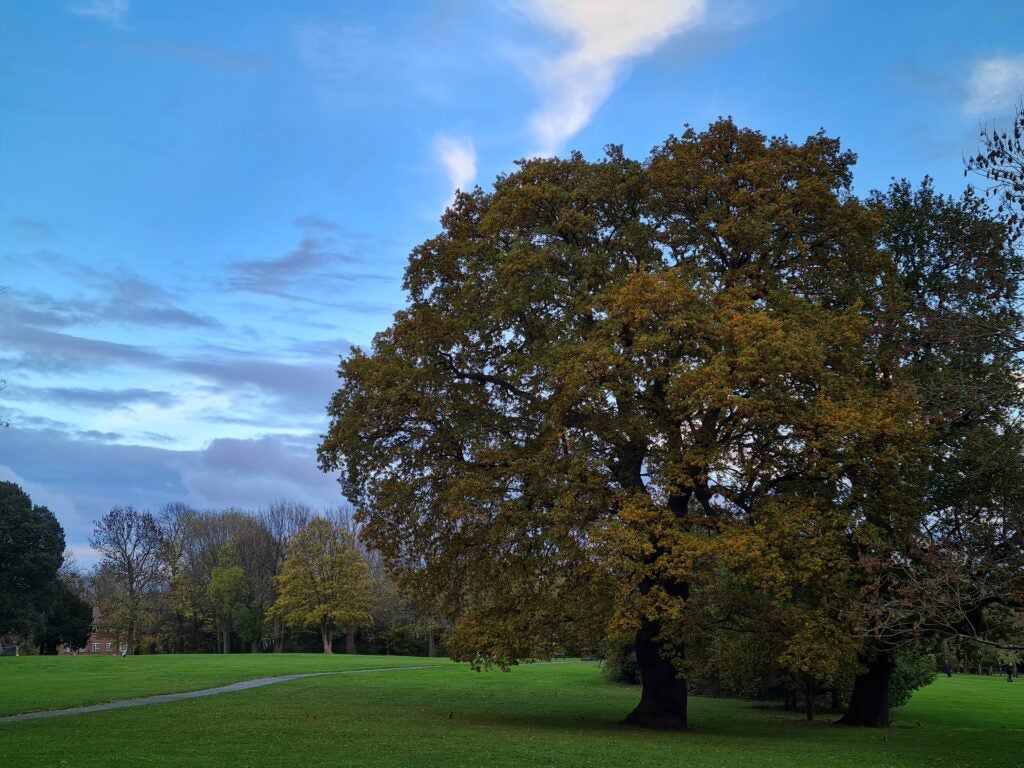 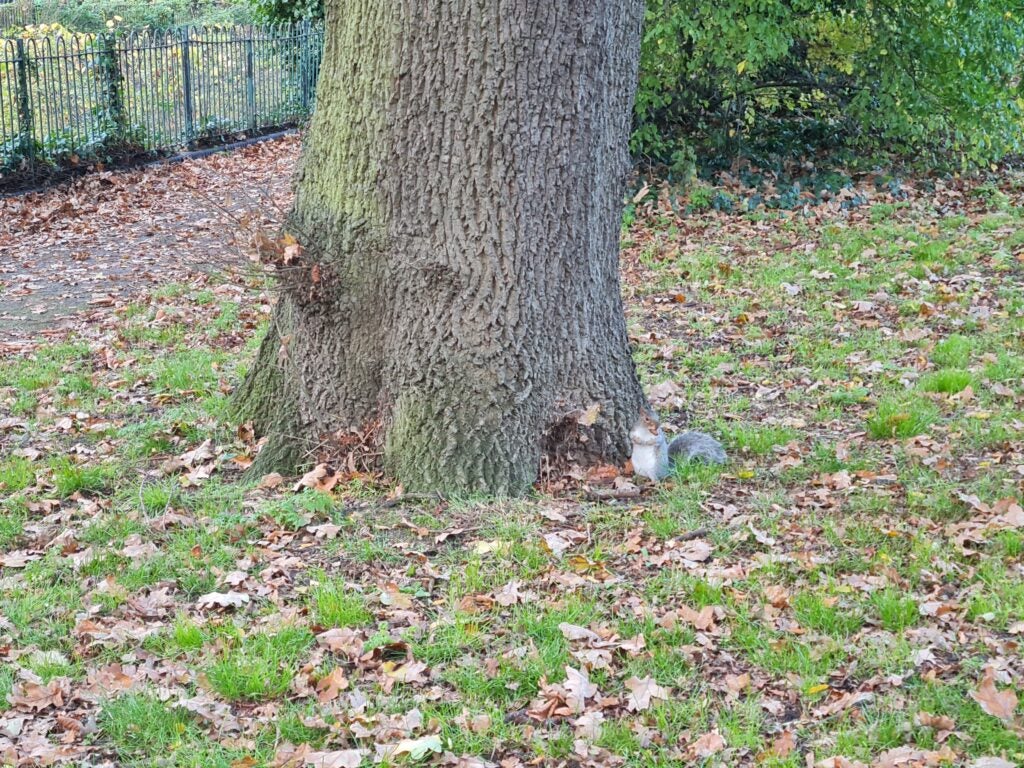 You can shoot video at up to 8K resolution, but I’d advise sticking to 4K/30 or 4K/60. Stabilisation and motion quality is better in these modes and the highest resolution setting uses the “zoom” camera rather than the primary. That said, getting any form of stabilisation at 8K resolution is impressive.

The Galaxy Note 20 also has a Super Steady mode, which uses the wide camera for boosted electronic stabilisation. I was impressed when this feature appeared in early 2019, but it has now been surpassed.

Super Steady is limited to 1080p and there’s a big hit to general image quality. Handsets such as the Oppo Find X2 Pro and Vivo X51 5G pull off this “GoPro stabilisation in a phone” concept better.

The Galaxy Note 20 has a 4300mAh battery, which is relatively small for a phone with a 6.7-inch screen. Samsung’s S-Pen likely has some impact here, taking up internal space, as the Galaxy S20+ has a slightly larger 4500mAh cell.

Its real-world longevity disappoints. I have often needed to top up the Galaxy Note 20 to ensure it lasts until bedtime. And on lighter days, I’m rarely left with much battery life at all by the end of the day.

This is a side-effect of the Galaxy Note 20’s Exynos processor. Samsung’s top processors aren’t as power-efficient as those of the more popular Qualcomm Snapdragon range.

Battery life is the Note 20’s biggest issue. It makes the phone seem to demand quite a lot of maintenance, particularly if you tend to idly browse sites, social networks or eBay on the sofa.

Samsung doesn’t lead the way for charging speed, either. The Galaxy Note 20 supports 25W charging, which gets the phone from 0% to 39% in 30 minutes. This is much slower than the OnePlus 8T, for example. 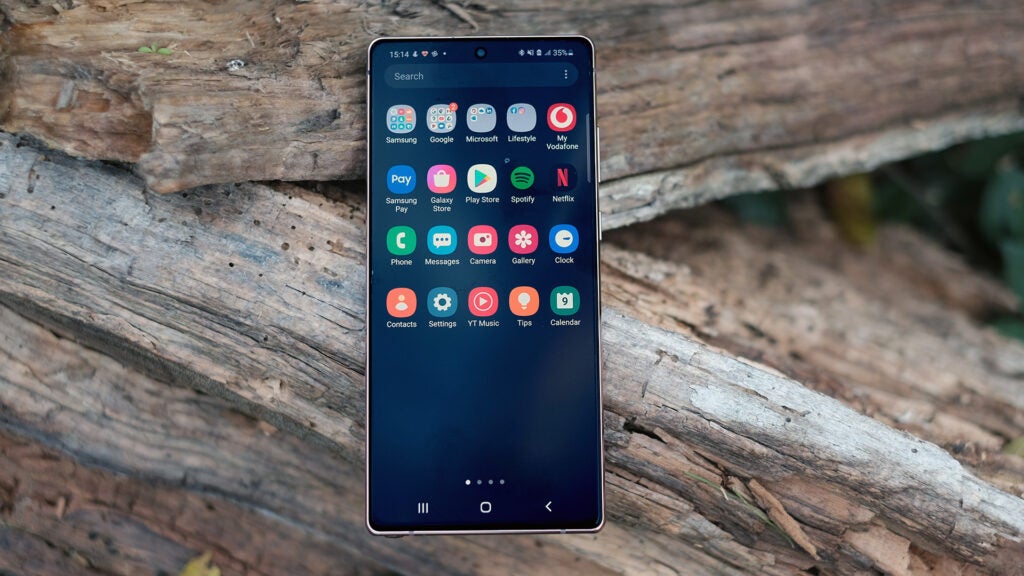 Should you buy the Samsung Galaxy Note 20?

The Galaxy Note 20 will not be remembered as a high point for the Note series. It loses out on too many of the higher-end elements of Galaxy phones without a commensurate drop in cost. The phone’s back is plastic, the screen is flat rather than curved, and screen refresh is 60Hz when devices costing just a fraction of the Note 20 now come with high refresh rate screens. Add to this the below average battery life.

There’s still plenty for the lighter user to appreciate. The Samsung Galaxy Note 20 has enough power to run high-end games well, and includes a great set of cameras and the brilliant S-Pen.

So despite the fact that the Note-series’ charm remains, consider the design cuts and short battery life before you buy.