The Samsung Galaxy S21 Ultra has finally been revealed, and if you’re after an abundance of high-end specs, then get ready to be impressed.

The Ultra was unveiled alongside the more modest Samsung Galaxy S21 and Galaxy S21 Plus and is the highest specced model available, but you better prepare your wallet if you plan on getting one.

With up to 16GB of RAM, 512GB of storage, a 120Hz WQHD+ display, S Pen support and a 108-megapixel camera, this is Samsung’s no-compromise attempt at delivering the best Android phone ever made.

Here’s what you need to know about it.

Editor’s Note: Due to COVID-19 restrictions in the UK, we haven’t had the opportunity to properly use the S21 series yet, so all the information comes from Samsung via briefing sessions we attended remotely. We’ll hopefully have the phones very soon and we’ll bring you a more detailed ‘hands-on’ then.

How much is the Galaxy S21 Ultra?

Does the Galaxy S21 Ultra support the S-Pen?

Yes, the Samsung Galaxy S21 Ultra supports the S-Pen, but it isn’t included with the phone. You have to purchase it separately. The handset also doesn’t offer a place to store the stylus.

Does the Galaxy S21 Ultra have a Snapdragon 888 in the UK?

No, in the UK the Samsung Galaxy S21 Ultra is powered by the Exynos 2100. A Snapdragon 888 version is available in other regions. This is a shame as, based on our experience reviewing past Samsung phones, the Exynos models have shorter battery lives.

Is there a microSD card slot on the S21 Ultra?

Does the Galaxy S21 Ultra come with a charger?

No, you’ll need to source your own charger and earphones for the Galaxy S21 Ultra.

What software does the Samsung Galaxy S21 Ultra run?

Still after more information? Then scroll down for a more detailed look at the S21 Ultra.

The Samsung Galaxy S21 Ultra was made available for pre-order on 14 January, immediately after it’s launch. It will hit retail stores on 29 January.

We’d expect the Galaxy S21 Ultra to be available through UK and US network vendors, too, if you don’t want to buy it outright and prefer to pay in instalments.

Of course, with all non-essential shops currently closed in the UK, you’ll only be able to get these phones online right now.

While the S21 and S21 Plus are available in some lavish hues, the Ultra features more options, coming in either black or white along with a couple of Samsung store exclusive colours including brown and navy. During our briefing, we saw a prominent camera module on the handset’s glass back was it’s most noticeable feature. The glass surrounding the camera is glossy, but the rest of the Ultra’s rear has a matte finish.

If you were hoping that Samsung’s Ultra offering would be slimmer than the other models in the range, then prepare to be disappointed. It’s a big phone and it’s heavier than the S20 Ultra by a few grams. Specifically, it matches the iPhone 12 Pro Max’s 228g weight. Based on our experience testing the iPhone this means it will likely feel cumbersome to hold for some users. But, If you’re keen on more sizeable handsets then you’ll likely get used to it. 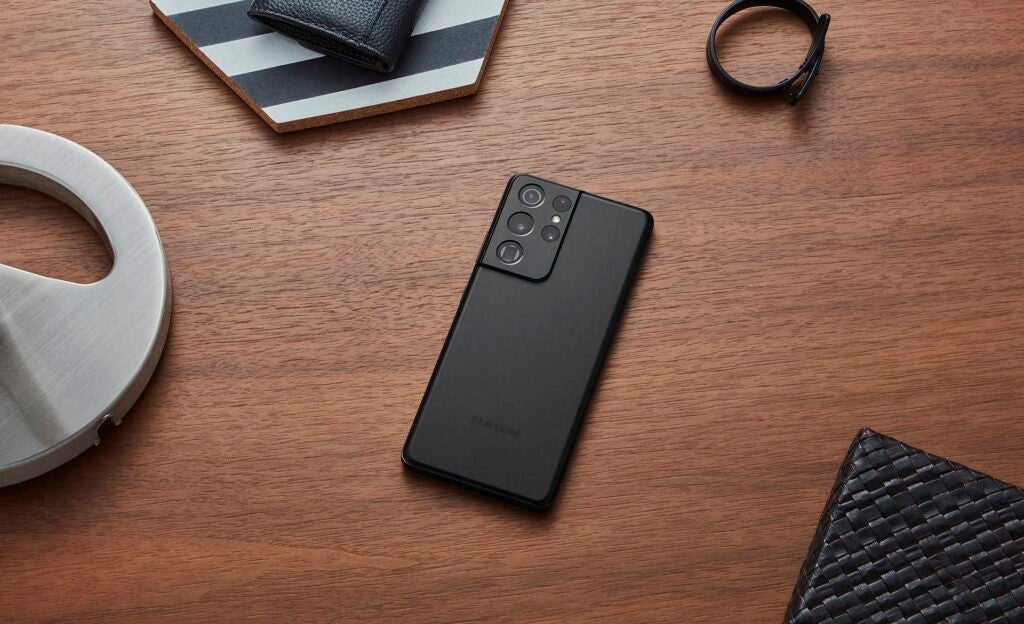 Annoyingly, the phone lacks expandable storage, which will be an issue if you’re looking to capture large amounts of 8K video. In past reviews we’ve found shooting even 4K footage can easily eat up 128GB fairly quickly. Outside of this, the device at least remains IP68-rated, and includes stereo speakers to offset the lack of a headphone jack.

Samsung Galaxy S21 Ultra specs and performance – is it worth it?

The Samsung Galaxy S21 Ultra is the S21 of choice for those wanting the “best” of everything. Even more so than last year, Samsung is pushing this handset as the true flagship we’ve all been waiting for.

As a piece of hardware there’s plenty to back up this claim, even when compared to its cheaper S21 siblings and S20 predecessor. It comes with more RAM (12GB or 16GB, as opposed to 8GB), double the storage, a sharper and brighter WQHD+ display and, importantly, support for the S Pen.

One downside is that the S21 Ultra doesn’t come with a silo for the S Pen, so you’ll need to invest in a case to hold it safely. Not only that, but you’ll need to buy the S Pen itself for £34/$39. As such, we’d class it as more a handy extra than a true feature of the S21 Ultra. Still, the support is welcome based on how helpful we’ve found the stylus when testing past Note phones.

The S Pen misses some of the tricks of the one you’ll find in the Note, as it is purely a ‘passive’ device with no direct connection to the phone. You won’t be able to use any of those air gestures or utilise it as a remote for the camera. 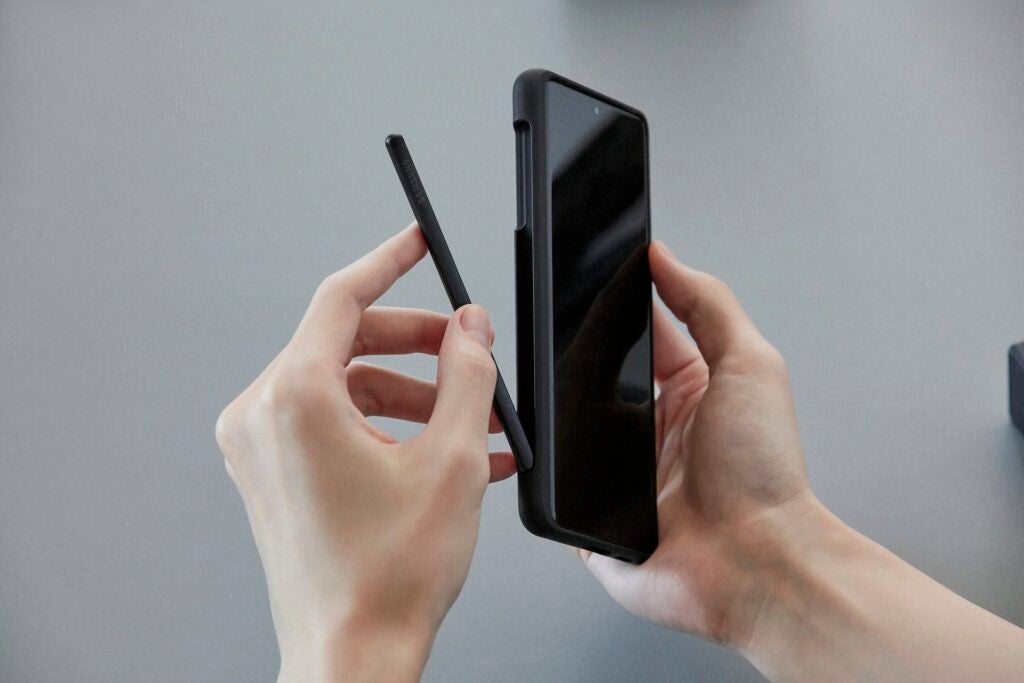 The S Pen slots into a case

Powering the phone is either a Snapdragon 888 (US) or Exynos 2100 (UK), both of which are 5G capable. We’ll have to properly test out the Exynos version to see how it compares to the usually superior Qualcomm model. In the past, we’ve found Qualcomm chips have easily outlasted their Exynos rivals during our battery tests.

As mentioned above, the Galaxy S21 Ultra offers a superior display compared to the cheaper models, and it’s the only one of the bunch to come sporting a slightly curved panel.

Unlike all of Samsung’s 120Hz phones from 2020, the S21 Ultra’s 6.8-inch panel can refresh at 120Hz and use all the pixels of that WQHD+ display at the same time. Previously, you had to choose between the added smoothness of a high refresh rate or added detail of a higher resolution, which left the S20 trailing behind many Android rivals.

The refresh rate is adaptive too. This lets it switch from 10Hz to 120Hz to offer depending on what the phone is doing. This is a key move that will, hopefully, improve the phone’s battery life. For example, the 120Hz panel won’t be of much use if you’re watching a video on YouTube, so this feature ensures battery life isn’t drained unnecessarily. 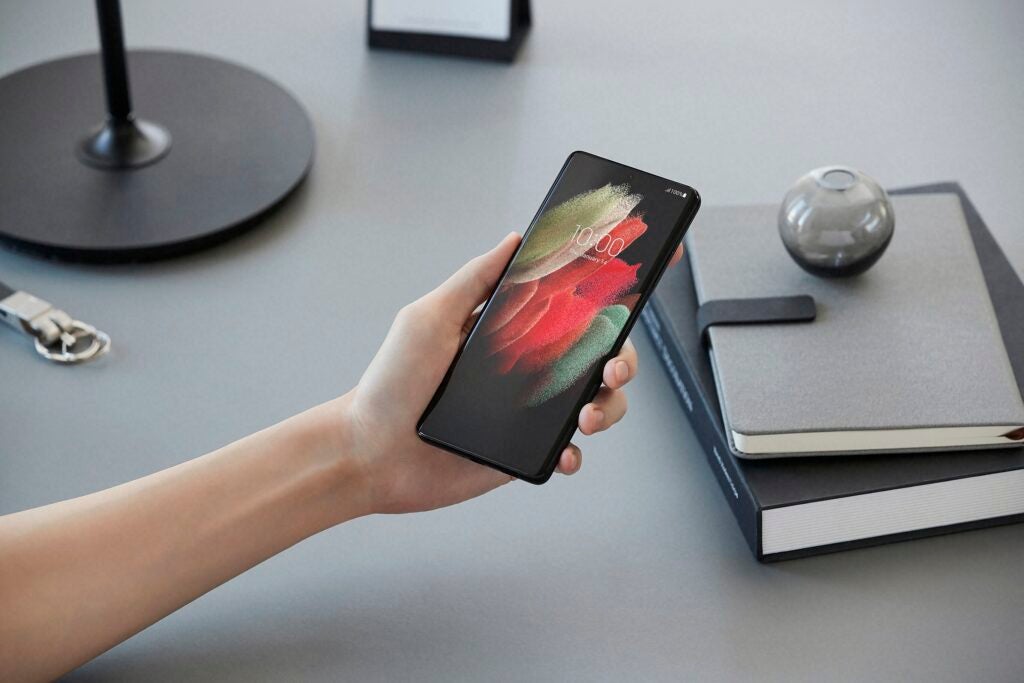 Of course, Samsung is using an AMOLED panel, which features an Eye Comfort Shield to reduce blue light levels. Expect proper HDR support in apps such as Netflix as a result of the reported 1500 nits of brightness. Given our experience with prior Samsung AMOLED screens we’re also expecting perfect blacks and that typical Samsung hit of contrast that makes the Korean firm’s among the best we test year-on-year.

The big differentiator between the S21 (and S21 Plus) and the S21 Ultra is their camera systems. While Apple and Google attempted to squeeze as much as they could from 12-megapixel sensors last year using clever software optimisations, Samsung is going all-in with pixels.

The main camera is a new 108-megapixel unit with laser auto-focus, OIS, an f/1.8 lens and 3x more dynamic range than the S20. To non techies this means it should capture sharper images and perform better in difficult situations, like low light.

All the S21 models

It’s paired with a duo of tele lenses to achieve the 100x Space Zoom tag; hopefully, it’s more successful this time. Last year, the S20 Ultra’s Space Zoom tech was a key let down, with it offering poor performance without a tripod during testing. The fourth camera is a more traditional 12-megapixel ultra-wide unit. Rounding the setup out, there’s a 40-megapixel sensor on the front.

Samsung says the phone is capable of capturing high-resolution footage from multiple cameras at the same time in what it calls Director’s View. You can also capture 12-bit files, which are better for professional editing. Samsung’s also claiming the Single Take feature, which takes photos and videos simultaneously, is far smarter thanks to the increased AI prowess of the phones new chipset.

That’s a considerable amount of ‘spec’ to consider, and we won’t really know just how this camera performs until we get it in our hands and shoot with it, which we’ll be doing the moment our review unit arrives.

Depending on your location, the Galaxy S21 Ultra’s box will miss a couple of notable bits, namely a charging plug and headphones. Some regions will have these included (as many did for the iPhone 12) but this won’t be the case in the UK and US. The only item included in the box outside of the phone itself, is a USB-C to USB-C cable.

This means you’ll need to invest in a fast – ideally 25W – plug to achieve good charging speeds. You can charge the handset wirelessly, too, and use the Ultra to charge other devices with Reverse Powershare. But be warned, based on our experience testing past Samsung phones, Powershare charge speeds are fairly slow.

The 5000mAh battery is a generously sized cell, so we’re hoping for some impressive endurance.

“As ambitious as it was at the time, the S20 Ultra didn’t have the skills to really make it one of the top phones of 2020. It was ugly, struggled to keep focus, and disappointed with its headline Space Zoom feature. For the ridiculously high asking price, Samsung missed the mark quite dramatically.

On paper, the S21 Ultra seems to offer much more, and with the bevvy of features ditched from the cheaper S21 models, it’s the only way to get a WQHD+ display and curved screen.

The camera system is packing the pixels (hopefully the focus works this time) and the battery and screen are both seriously tempting.”