Convertible tablets are beginning to take over from laptops, as we wrote in our article ‘Why Windows 8 will kill the laptop’. However, while premium tabs like the Microsoft Surface and Asus Transformer offer keyboards to turn them into flexible all-rounders, Apple’s iPad does not and won’t for the foreseeable future. The solution: a third-party keyboard case. If you want to be productive or even type long emails on your iPad, the virtual keyboard just won’t cut it. Freedom thinks it has the answer with its i-Connex Combi, a folio with removable Bluetooth keyboard. 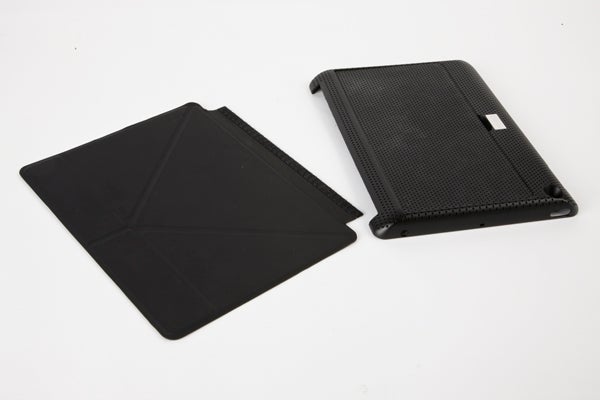 The i-Connex Combi isn’t just a keyboard either. It protects your iPad front and back (unlike a solution such as the Logitech Ultrathin Keyboard Cover, wakes/sleeps your iPad, and acts as a stand. It’s also the only solution on the market that can integrate Apple’s official Smart Cover. Moreover, Freedom claims its Combi is “the smallest, slimmest and lightest folio” around.

The design of the Combi is unique, dramatically setting itself apart from the majority of keyboard covers/folios. It consists of three main components: a removable cover that’s very reminiscent of the one seen on the Pong iPad Case, a perforated hard plastic case that holds your tablet and the keyboard, and of course the keyboard itself. 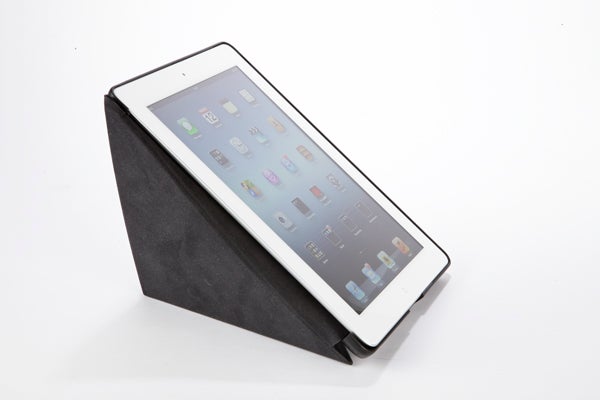 Though the front cover is beautiful, overall the i-Connex isn’t the most attractive case around. This is thanks to the hard case making a rather bulky and plasticky impression. Build quality throughout is good.

The smart cover is a thing of beauty, and far more useful than Apple’s alternative. This is because, just like the Pong one, it has diagonal fold lines as well as the usual horizontal ones, which lets you fold it into a triangle to act as a very versatile stand. 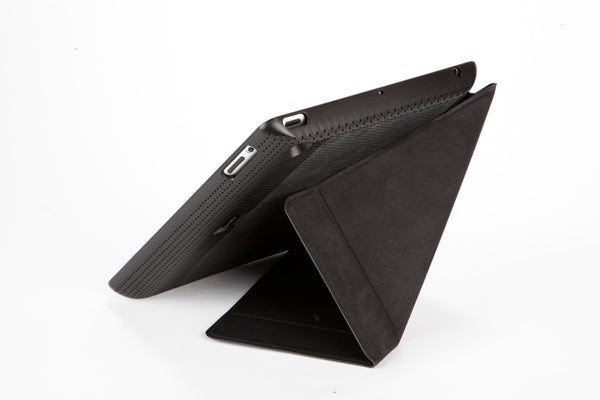 It’s quite durable and feels lovely. The cover sports a smooth, soft-touch outer finish and a suede-effect inner lining. It attaches to the hard-case securely thanks to a Velcro strip. Our only minor complaint is that, just like the Pong, its magnets sometimes aren’t quite strong enough to hold it flush with the iPad’s screen. This also means that on occasion it will accidentally turn your iPad on/off.

If, for some reason, you wish to use Apple’s own Smart Cover instead, that’s an option with the i-Connex Combi. Simply detach the bundled cover and the hard base leaves room for the Smart Cover’s magnetic hinge. 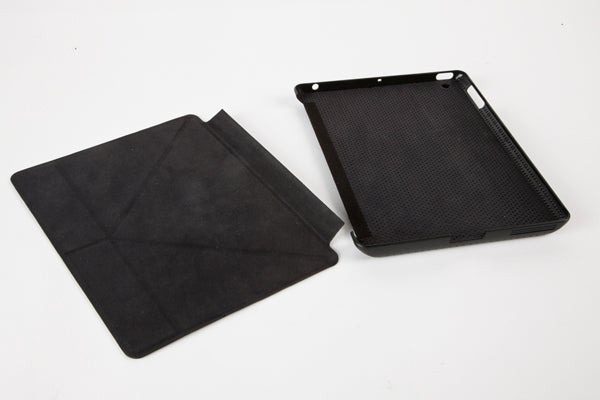 The hard case completely surrounds your iPad, only leaving room for the ports and buttons. It slips on securely and can fit both the iPad 2 and new iPad AKA iPad 3 or newer new iPad AKA iPad 4 (bad Apple, bad). Though it’s constructed from hard plastic, there’s a soft foam inner lining to protect your tablet’s aluminium back from marks. It’s also fully perforated to ensure your tablet won’t overheat, a thoughtful feature.

Unfortunately, this part of the folio is where our issues with the i-Connex Combi begin. Its hard finish isn’t exactly pleasant in the hand, and there are some way-too-sharp edges at the charging connector and front cover hinge. More than anything though, it just comes across as very bulky – and at around 2cm thick for the entire contraption, that impression is not unwarranted. 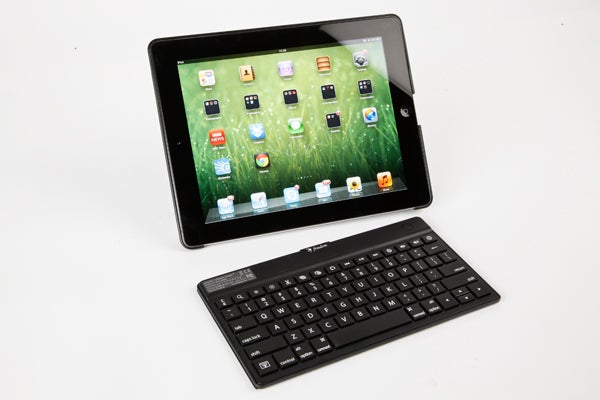 Admittedly this is a complaint with many folio iPad cases and the i-Connex Combi is slimmer than most we have seen. This is a slight case of the one-eyed folio being king in the land of the blind though; just to put things into context, the Logitech Ultrathin Keyboard Cover with iPad attached is still thinner overall. Of course, it doesn’t protect your tablet.

The hard cover holds the keyboard securely. A strong magnet practically pulls it in, though you can only fit it in one way around. Once ‘docked’, the keyboard sits almost flush with the rear of the case and blends fairly well. There’s a small lip to pull it out, which may be a bit fiddly for those with broad fingers. Taking the keyboard out also leaves a very unattractive… hole which completely ruins the look. Still, function over form and all that.

The wireless Bluetooth keyboard is a lightweight, slim affair which aids Freedom’s claims to fame for the Combi as the lightest and thinnest solution around. Aside from the usual keys, it sports a Bluetooth pairing button at the top, while the rear houses a microUSB charging port and on/off switch. A microUSB cable is included, and according to Freedom, the Combi should last up to 100hrs of full use (300hrs standby) on a charge.

Layout and spacing are very good, with a dedicated row of iOS keys, dedicated number keys, and a full-size right-shift key. Key response is also excellent, with a decent amount of travel and crisp feedback. This is a nice change from many iPad keyboards, which –even on models where keys have a good click – frequently suffer from a horrible layout. 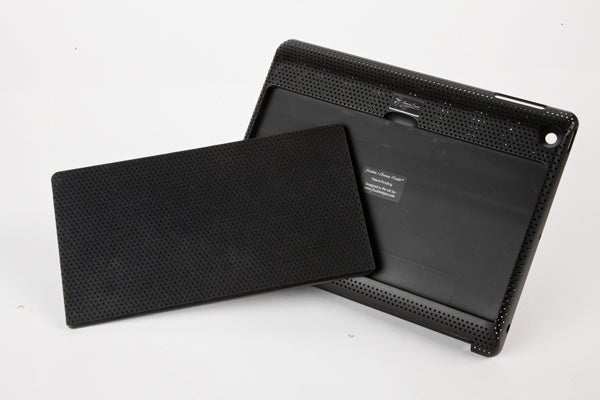 However, the keys themselves are on the wee side. Though you can get up a nice quick touch-typing speed, the occasional mistake from hitting the edge of another key will be inevitable unless you have very small hands.

Just to put some numbers to that, the keys on the Logitech Ultrathin Keyboard Cover (which is our benchmark as it’s the best iPad keyboard we’ve used) has keys that are 14mm wide, while on the Freedom i-Connex Combi they measure 12.5mm across. That might not sound like much, but it’s enough to make a noticeable difference when typing.

We also discovered another issue where key response on the board is affected by dropped signal, especially when close to the iPad and main folio cover – resulting in missed keystrokes or multiple character instances for a single one. We tested this with a second i-Connex Combi keyboard just to make sure, and the behaviour was repeated. This is unfortunate as it’s a likely position when using the keyboard away from a desk.

And that’s where we get to the Freedom i-Connex Combi’s main problem. Most iPad keyboards make an effort to dock the iPad with the tablet connected. The Combi might be more elegant than most and is certainly thinner and nicer to hold than the average keyboard folio, but the keyboard remains a loose element. While this is just fine on a desk, if you want to work on your lap it’s very far from ideal, as is the stand mechanism. For this kind of scenario, folio alternatives like the Adonit Writer are superior despite their inferior keyboard layouts.

Currently, the cheapest we were able to find the Combi for was £80. That seems like reasonable enough value for what you’re getting. After all, a few niggles aside it lives up to its promises and on a desk it’s nicer to use than many folio iPad cases. 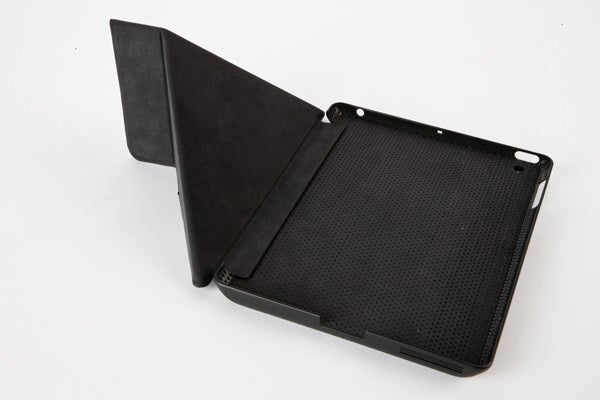 However, when you can get the Logitech Ultrathin Keyboard Cover for around £70, the i-Connex doesn’t seem that attractive anymore. It might feel like we’re harping on a lot about the Ultrathin, but it offers a superior typing experience, is thinner, looks better and properly docks your iPad with a strong magnetic mechanism – essentially turning it into a ‘laptop’ that’s as comfy on your lap as on a desk. Admittedly it doesn’t protect the back of the iPad, but if you can live with this, it’s by far the superior choice.

The Freedom i-Connex Combi is an innovative and versatile iPad and new iPad folio cover with a great smart cover, plus a keyboard which offers a decent typing experience and works well on a desk. However, it suffers from a few niggles, comes across as quite bulky, and the loose keyboard design is terrible when trying to use it on your lap. With alternatives that are superior on many counts available for less, its appeal is limited.